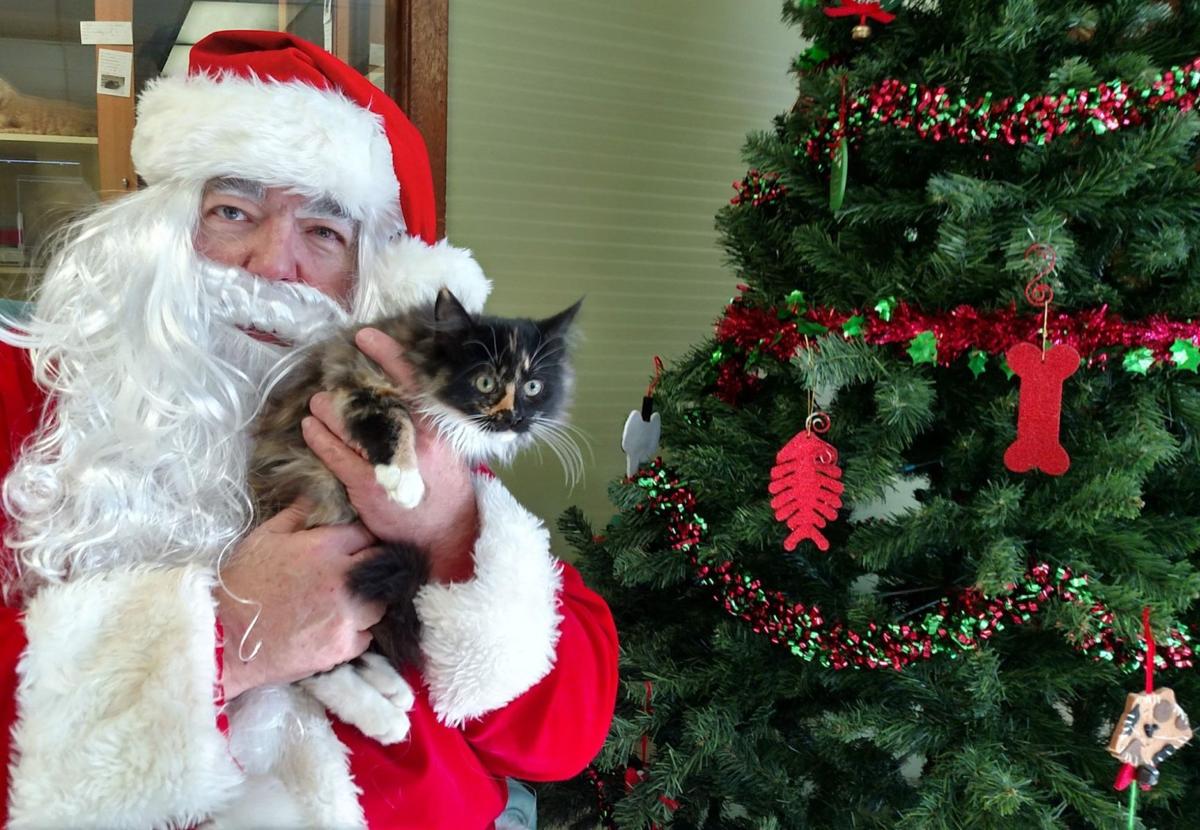 A tortie kitten gets her photo taken with Santa during the Paws and Claws Adoption Center's fundraiser in a previous year. A Howl A Days PawPawrazzi photo event will be held this weekend at the First United Methodist Church Outreach Center. 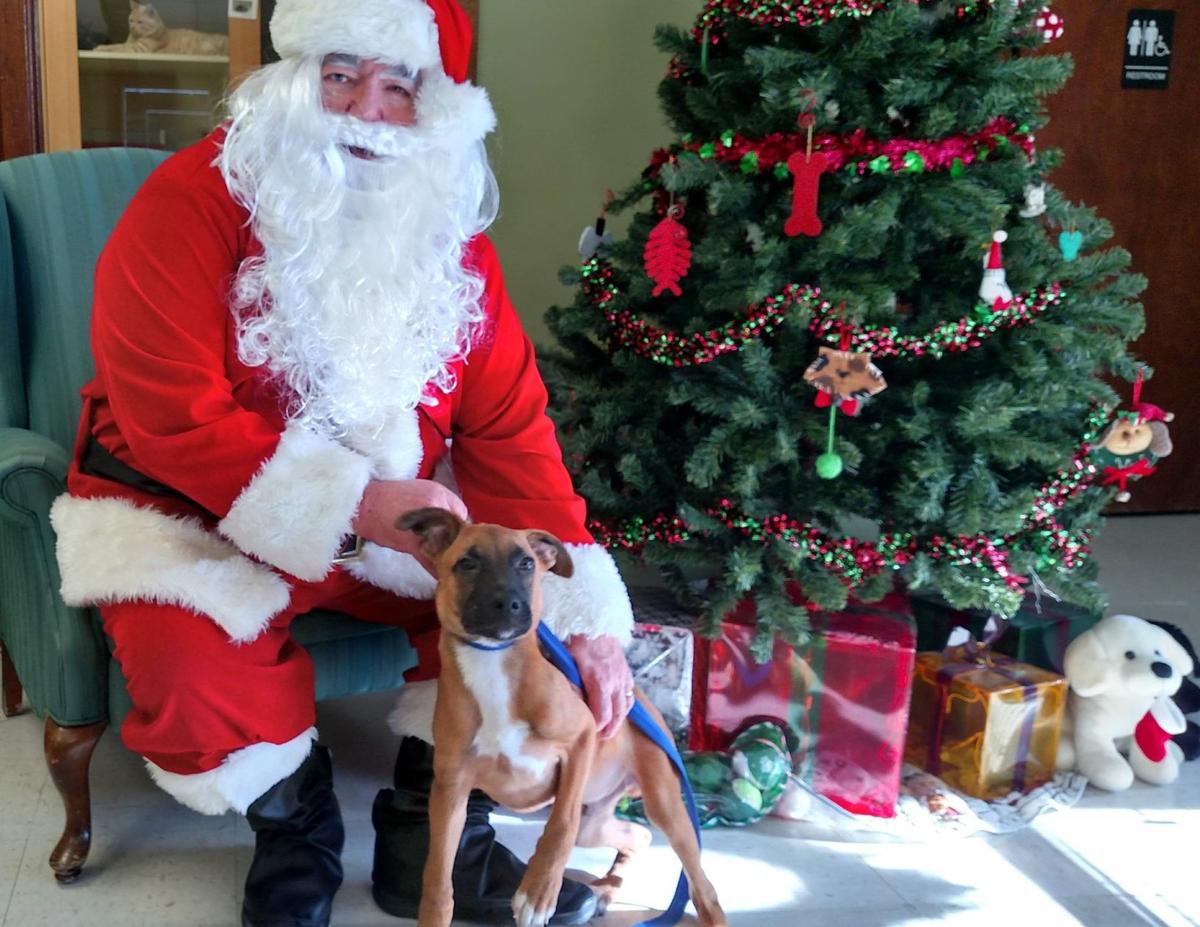 Santa stops by the Paws and Claws Adoption Center in Columbus in a previous year to visit with dogs and cats. A fundraiser in which residents can have their pet's photo taken with Santa and/or the Grinch will be held this weekend at First United Methodist Church Outreach Center.

Residents will have a chance to have their pets photographed with Santa and/or the Grinch during the Howl A Days Pawpawrazzi fundraiser this weekend.

The Paws and Claws Adoption Center in Columbus is holding the annual event from 1 to 4 p.m. on Saturday and Sunday at the First United Methodist Church Outreach Center, 3602 16th St.

Images by Sharon will be doing the photographs. The cost is $8 for a 4”x6” photo, which will be a donation to Paws and Claws. Other packages are available from the photographer.

“We’ve had in the past, most of what we have is dogs and cats, (but) we’ve had people bring birds, we’ve had a hamster,” Paws and Claws Director Deb Potter said. “One year, somebody brought a horse and we took the pictures outside, of course, with Santa’s arm around the horse’s neck. Any pets, any animals are welcome.”

Pet owners can have the photos taken as they see fit within reason, noted Potter.

“They can take photos of just the animals with Santa or the Grinch, they can have photos with their kids with their pets, we’re pretty flexible as far as what we can do, pretty much whatever they want to do,” Potter said.

“It’s usually a very popular event. Last year at Earl May, we had probably the largest turnout we’ve ever had. Between Saturday and Sunday, we did, I’m thinking, over 100 photos,” she said.

Because of the COVID-19 pandemic, the shelter was unable to have the event at the Earl May Garden Center this year. But, the UMC Outreach Center will work well with the shelter’s current need.

“The Outreach Center is a very large area, we’re going to have it marked off so that when people are waiting, they’re at least 6 to 8 feet apart. We’re not going to allow more than three or four groups in at a time,” Potter said, adding that masks will be required once inside the building.

“It’ll work out nice there because they come in one door at the southwest corner and then there’s a back door they can go out of so they don’t have to pass the people that are waiting.”

Attendees will fill out forms by themselves and there’ll be a drop-off box for payment, she said.

Sandy Martensen, program coordinator at First UMC, said this is the first time the fundraiser is being held at the Outreach Center.

The event has special meaning for Martensen, whose three dogs were adopted from Paws and Claws. She will be there this weekend to have her Labrador take a photo with Santa.

“It’s a very good cause. All of our dogs are from there so it’s near and dear to my heart,” Martensen said. “If we can help in any way, we’re happy to do it.”

In addition to Earl May, previous events have been held at Paws and Claws, but Potter said that it’s more efficient for the fundraiser to be held at a different location.

“It just seems to work better off-site because, like if we have it at Paws and Claws, we’re still open for business and we’re trying to do adoptions and everything else. It gets a little chaotic there,” Potter said.

The photos will take about a week to come back. The doors to Paws and Claws are locked due to COVID-19. Potter said the shelter will call people to set up a time for them to come pick up the photographs.

The pet photo fundraiser is enjoyable to shelter staff and volunteers because they get to see animals that are being treated well, she added.

“We enjoy it because normally we get to see, these are pets that are happy and well taken care of, they’re spoiled and a lot of them are Paws and Claws alumni,” Potter said. “It’s fun for us to see the dogs and cats we’re adopted out and how they fit into that family. There are a lot of fun stories, good stories and heartwarming stories.”

Organizers say the commitment of volunteers allowed 1C Church's annual Community Thanksgiving banquet to go off without a hitch on Thursday.

A tortie kitten gets her photo taken with Santa during the Paws and Claws Adoption Center's fundraiser in a previous year. A Howl A Days PawPawrazzi photo event will be held this weekend at the First United Methodist Church Outreach Center.

Santa stops by the Paws and Claws Adoption Center in Columbus in a previous year to visit with dogs and cats. A fundraiser in which residents can have their pet's photo taken with Santa and/or the Grinch will be held this weekend at First United Methodist Church Outreach Center.