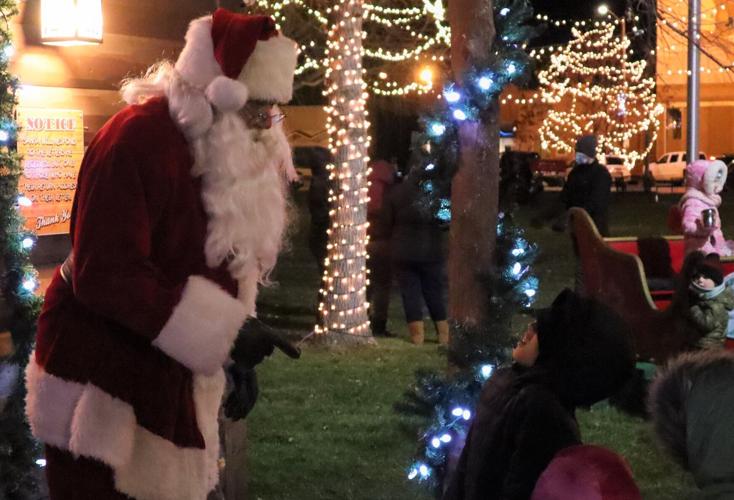 Santa Claus talks to a child after the Holiday Parade on Nov. 17, outside his house in Frankfort Square. 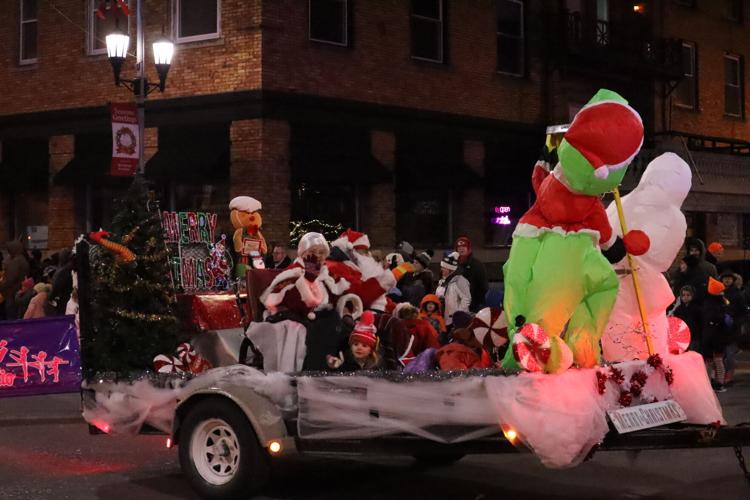 Santa, Mrs. Claus, a snowman and a Christmasaurus wave at parade-watchers from the back of Dale's Roofing's float in the Nov. 17 Holiday Parade. 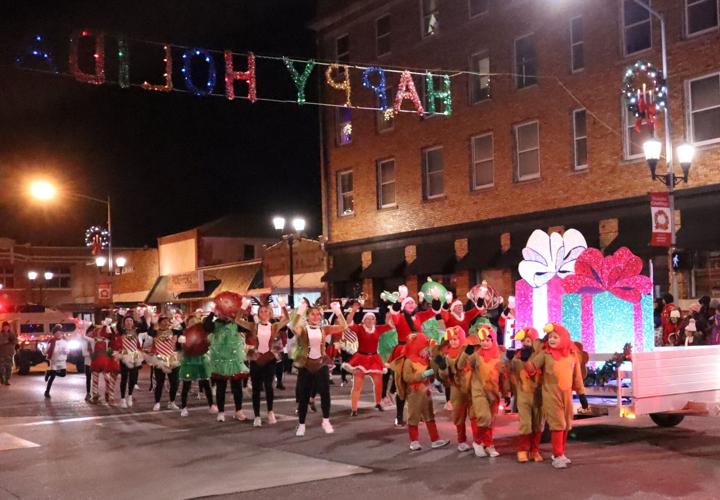 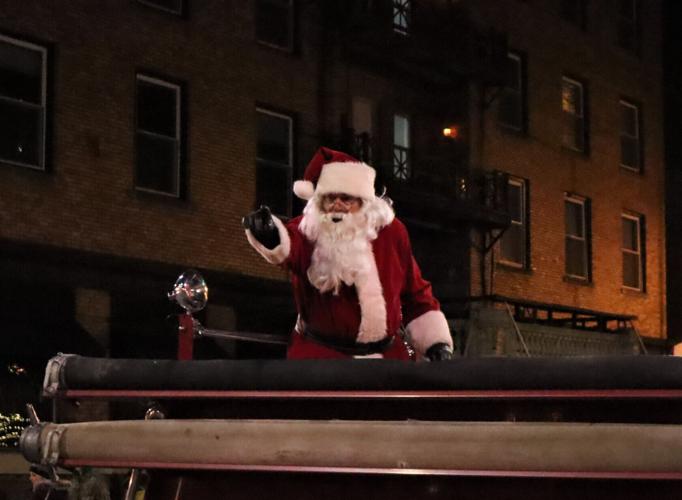 Santa Claus points toward the crowd during the Nov. 17 Holiday Parade on 13th Street.

Not even authentic North Pole weather could stifle the first annual Holiday Light Parade as it welcomed Santa and the beginning of the holiday season.

Hundreds of Columbus residents huddled on 13th Street the evening of Nov. 17 to watch local businesses and organizations show off their holiday floats and welcome the big man himself: Santa Claus.

In the past, Claus has arrived after Thanksgiving, but with the addition of this year's Holiday Light Parade, he decided to make an early visit to join the parade in the back of an antique firetruck.

"I'm a little earlier than I'm normally here, next week is actually the big day for Santa to come in for the holidays but this is kind of a prelim. It's nice to have the parade so that worked out pretty well," Claus said.

Claus, who made the daring voyage from his workshop to Columbus in time for the parade, settled into his house in Frankfort Square to ask Columbus' kids what they want for Christmas.

"[The best part is] kids, especially the little ones. That's the neat part, they anticipate the coming of Santa. When we're coming down the streets, the littler ones are the ones stepping out and looking," Claus said.

The parade's inaugural run, according to parents with children waiting to see Santa, was a success.

"I thought it was real neat, we loved the idea of it, a fun activity to do," said Josh Shank, parent of an eager Santa visitor. "We got here a little late, so all we saw was the parade and now we're doing this."

"I think just seeing everybody out and about is exciting. I think they did a great job, very entertaining," Tina Castille, another parent, said.

The parade was a collaborative effort between the Downtown Business Association and Columbus Parks and Recreation.

"I think for the first time it went pretty well. I think everybody enjoyed the parade go downtown, having Santa arrive on a firetruck," Eckhardt said. "Obviously I loved the parade but my favorite part is when all the lights come on downtown, the lights on the lampposts and in the square make downtown feel really festive."

Santa will be in his house Saturdays and Sundays from noon-4 p.m. and Thursdays from 5-7 p.m. from Nov. 26 through Dec. 22 for visits.

Jared Barton can be reached at jared.barton@lee.net.

Due diligence extended for temporary casino in Columbus

A temporary Harrah’s casino is still on track to come to Ag Park in Columbus and the provisional license may be approved as early as Dec. 14.

One of the hunters was flown to Lincoln because of his serious injuries.

All of the high school seniors receiving appreciation awards from the Optimist Club of Columbus had one thing in common – they’re well-rounded kids.

Frequent visitors to the Pawnee Plunge in Columbus will notice fee changes for the 2023 season, the most notable being the addition of a non-swimmer daily admission fee.

The first thing people often notice about others is their smile. For Scotus Central Catholic senior Ava Cremers, helping people feel comfortable with their smiles is something she strives for.

Giving Tuesday: What being a member of Club82 means

Paying for one square foot of a house may seem like an odd way to invest in real estate, but it's actually an easy donation option for Habitat…

To ring in Christmastime and celebrate the reason for the season, Columbus Area Vertical Voices will be back for its annual concert in December.

Santa Cop: Columbus Police Department give back for the holidays

With the cost of seemingly everything rising, it can be difficult for some to have the Christmas they want for themselves and their families. …

France plans to ration power in case of shortages

France plans to ration power in case of shortages

Santa Claus talks to a child after the Holiday Parade on Nov. 17, outside his house in Frankfort Square.

Santa, Mrs. Claus, a snowman and a Christmasaurus wave at parade-watchers from the back of Dale's Roofing's float in the Nov. 17 Holiday Parade.

Santa Claus points toward the crowd during the Nov. 17 Holiday Parade on 13th Street.