A young dog in Columbus credited with breaking free of a bad home situation and saving five other canines is getting another chance at life.

Hero, a one-and-a-half-year-old retriever mix, will soon be joining the home of another hero – that of Carrie Herrera, wife of Lincoln Police Department Investigator Mario Herrera, who died in the line of duty last year.

Paws and Claws Adoption Center Director Deb Potter said Hero was seized from a hoarding situation in Columbus on Nov. 13, 2020. He broke through boarded windows, attracting the attention of neighbor Tonie Quinlin.

Quinlin said she was outside her home with her friend’s dog and saw a dog hanging out of a busted window across the street.

“My girlfriend came over to look at that and she went over and she goes, ‘Well, it’s OK but oh my God the stench,’” Quinlin said, noting the dog had been covered in feces.

Quinlin called animal control and kept an eye on the house. She eventually saw a car pull over and someone trying to communicate with the dog. Quinlin got her leash and quickly saw that the canine had fully jumped out of the window.

“I got (the dog) and called the police department. He was in very bad shape,” Quinlin said, adding she had to give him treats to get him to calm down a little.

“God, it was sad. I had to help put him in the cop car. It was pretty nasty – I’ll never forget that.”

Five more dogs were taken from the home thanks to the actions of one brave pooch.

“The others were adopted and doing great. He was a little tougher, that’s why I named him Hero ... because he was the one who jumped out (and) saved the others,” Quinlin said. “And I’m glad he got that second chance – that is great.”

According to Potter, the adoption center’s veterinarian reported Hero to have old scars, muscle wasting, sunken eyes and was emaciated. She noted the other five were either sent to a rescue organization or adopted.

“He was very friendly but regressed and became highly energetic and anxious,” Potter said.

Ripley is a trainer and the adoption coordinator of Second Chance Pups, a program in which area shelter dogs are placed with inmates in the Nebraska State Penitentiary for nine weeks of basic obedience training. The dogs are then adopted to good homes.

“We’re looking for some that still need some manners – that may be why they’re getting overlooked and not adopted as quickly as some of the other dogs,” Ripley said, noting black dogs tend to get overlooked as well. “We kind of look for the ones that are bouncing off the walls. It may be like they’re too jumpy or too rambunctious…

“We’re just looking to get the least adoptable dogs out of the shelters, get them to a point where they’re adoptable and get them into a good home.”

Ripley is friends with Herrera. After Ripley shared Paws and Claws’ post, Herrera called Ripley and said she wanted to add Hero to her family.

Herrera had been wanting a larger dog from a shelter or rescue for a while.

“…I saw him and just knew. I didn’t know his story yet, I didn’t know anything about him. I texted Melissa and said, ‘The dog you posted, can we see him? I want him,’” Herrera said. “Melissa told the story of him, and I think we went the following weekend to go pick him up.”

“I was nervous, to be honest with you,” Herrera said. “He was a little skittish because he hadn’t been around a lot of people, but he was super loving, very loving to us. It was kind of emotional, too. It was nice.”

Hero will graduate from the Second Chance Pups program on April 9; Herrera will take him home that same day.

“We can’t go into the prison anymore, which is kind of a bummer, but he’ll do (well),” she added. “I think he’s adapted really well to where he’s at …. I’m super excited, the kids are excited. It’ll be a good addition to us.”

During the program, Ripley said, the dogs stay with their trainer throughout the day, except during the night when they stay in an indoor and outdoor kennel run at the prison.

The inmate who is training Hero has a strange connection to Hero, Ripley noted.

“Mario was there when the inmate was arrested for the murder that he’s in prison on, so it’s just kind of a weird full circle,” Ripley said. “… It kind of feels like it was meant to be.”

Ripley said that Hero is tuned in emotionally to others and described him as a “Velcro dog” who will stay glued to Herrera and provide her comfort down the road.

“It’s a really cool story, just how he broke out of the house and saved the other dogs,” Ripley said. “He’s a really cool dog. I’m really proud of him and the progress he’s made in our program has been fantastic and he’s going to a fantastic home.”

In late April, Columbus Area Chamber of Commerce Workforce Programs and Recruitment Director Kara Asmus said she hopes to have all kinds of ar… 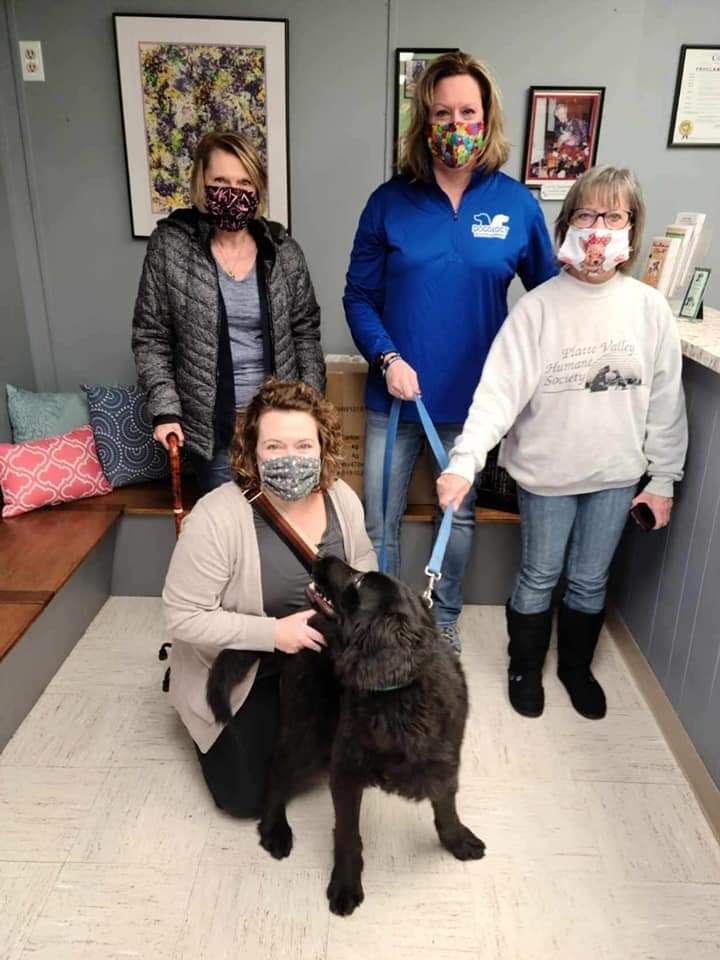 Carrie Herrera, in front, meets one-and-a-half-year-old retriever mix Hero for the first time in January at Paws and Claws Adoption Center. Pictured in the back are Platte Valley Humane Society Board of Directors President Bev Rose, Second Chance Pups Adoption Coordinator Melissa Ripley and Paws and Claws Director Deb Potter. The humane society does business as Paws and Claws. 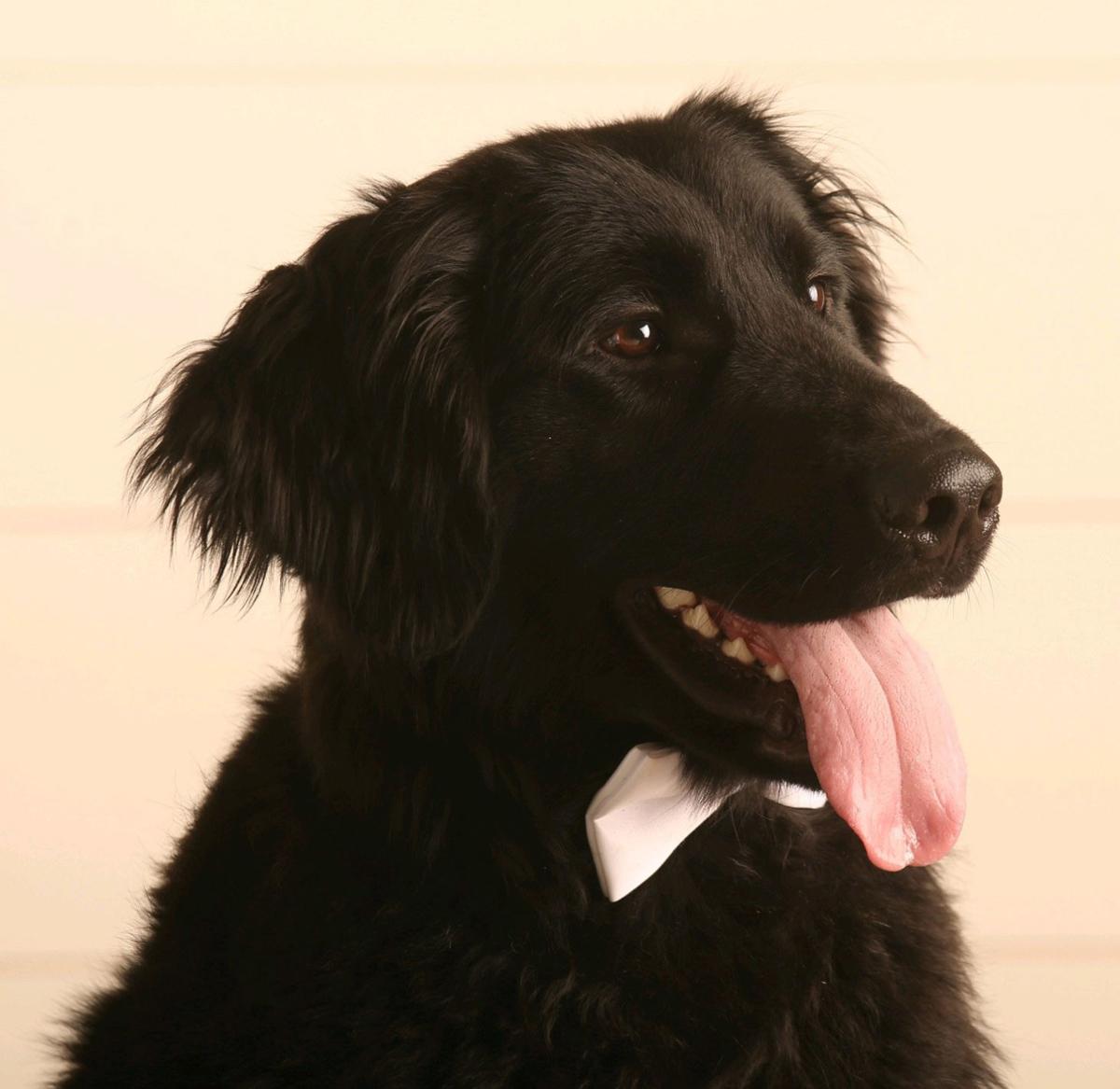 Hero, a one-and-a-half-year-old retriever mix, strikes a pose for the camera. In November 2020 in Columbus, Hero broke through a boarded up window in a hoarded home, leading to the rescue of himself and five other dogs. Hero is currently in a training program at the Nebraska State Penitentiary in Lincoln. 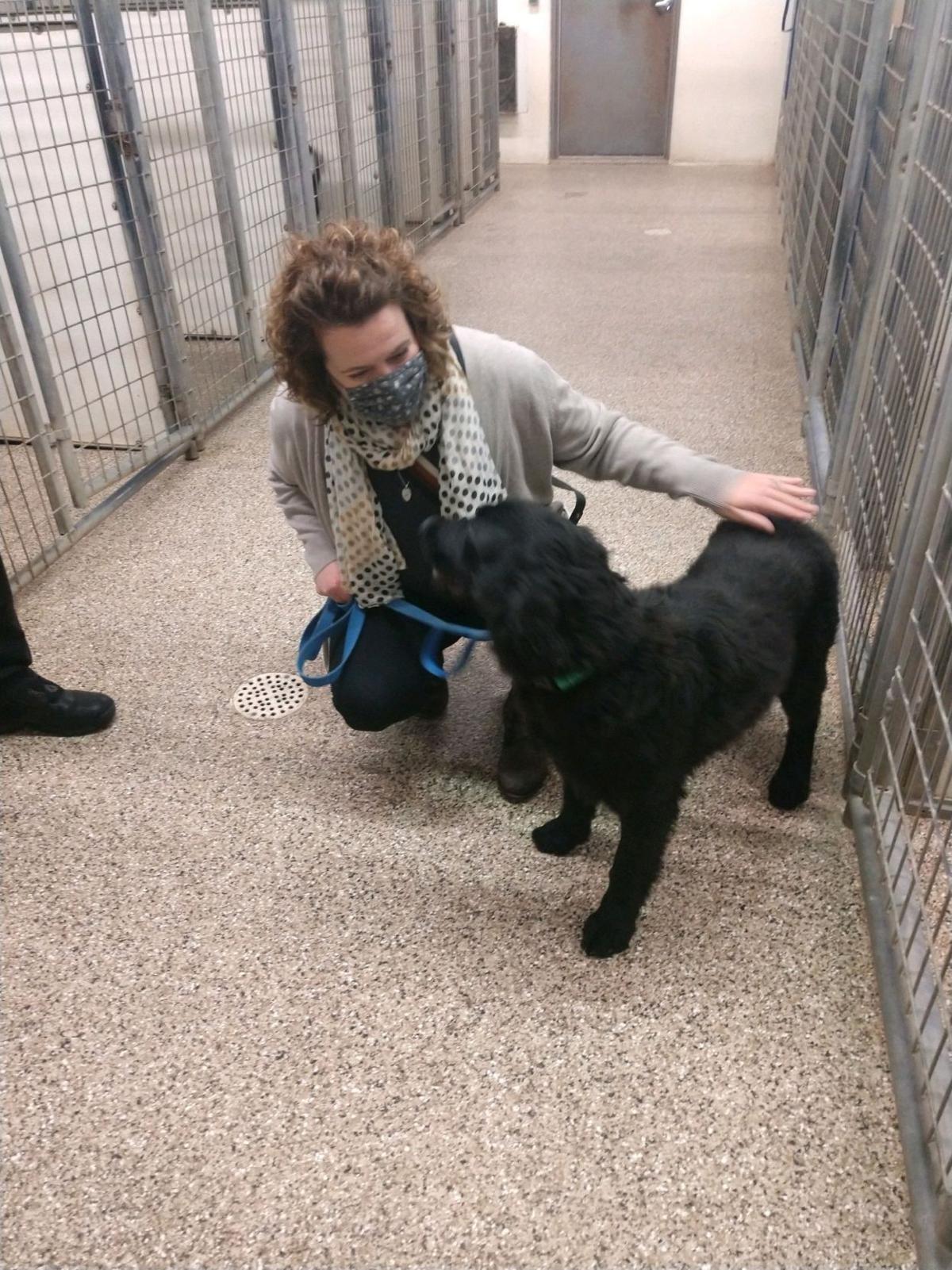 Carrie Herrera, wife of Lincoln Police Department Investigator Mario Herrera who died in the line of duty in 2020, meets Hero for the first time at the Paws and Claws Adoption Center in Columbus. Hero escaped from a hoarding situation last year, leading to himself and five other dogs being freed from bad home. 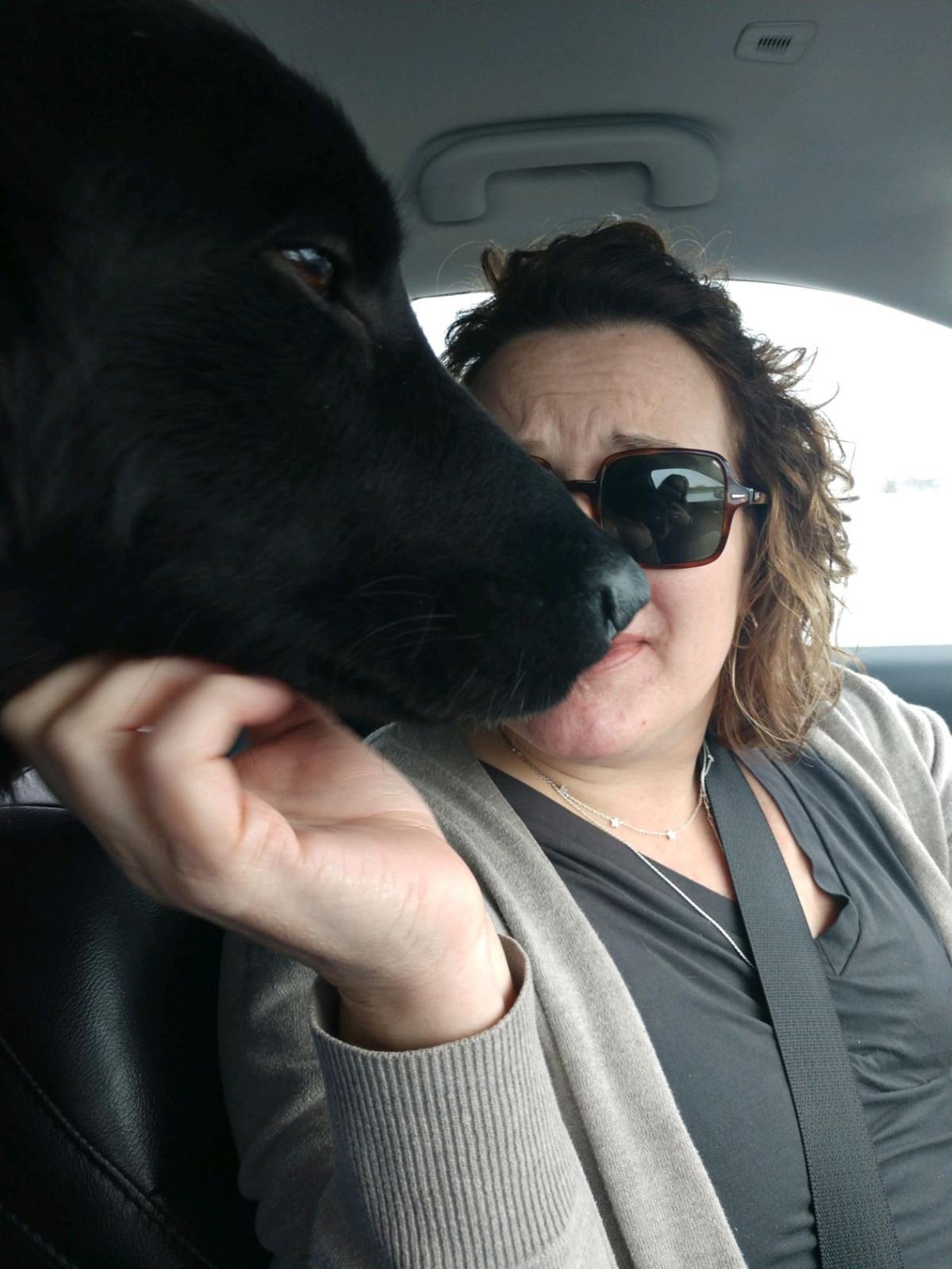 Hero sticks his nose upfront to greet Carrie Herrera while on the way to a Second Chance Pups training program at the Nebraska State Penitentiary in Lincoln. Hero is graduating from the program on April 9, after which he will be taken home with his new adopter, Herrera. 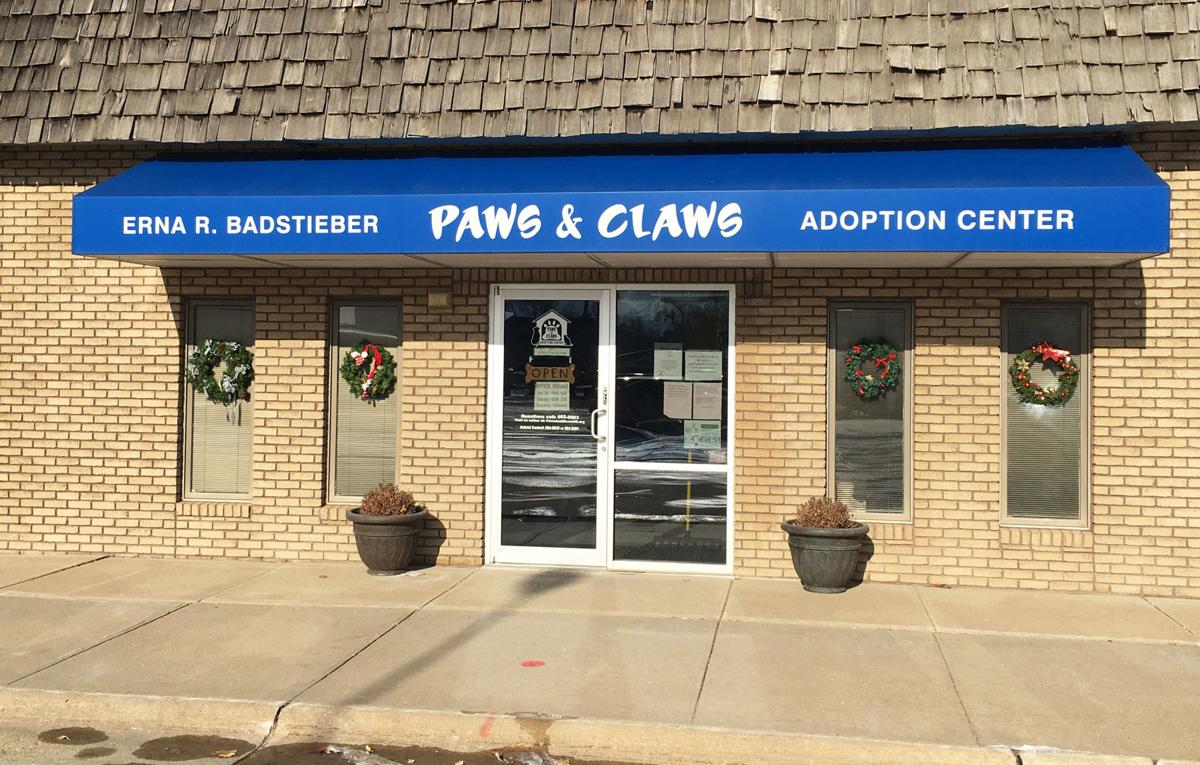