Dom Brandt, a local author, shows his new book, "Forever Will End," Friday in Frankfort Square. The book, intended to be the first in a series, was published last month. 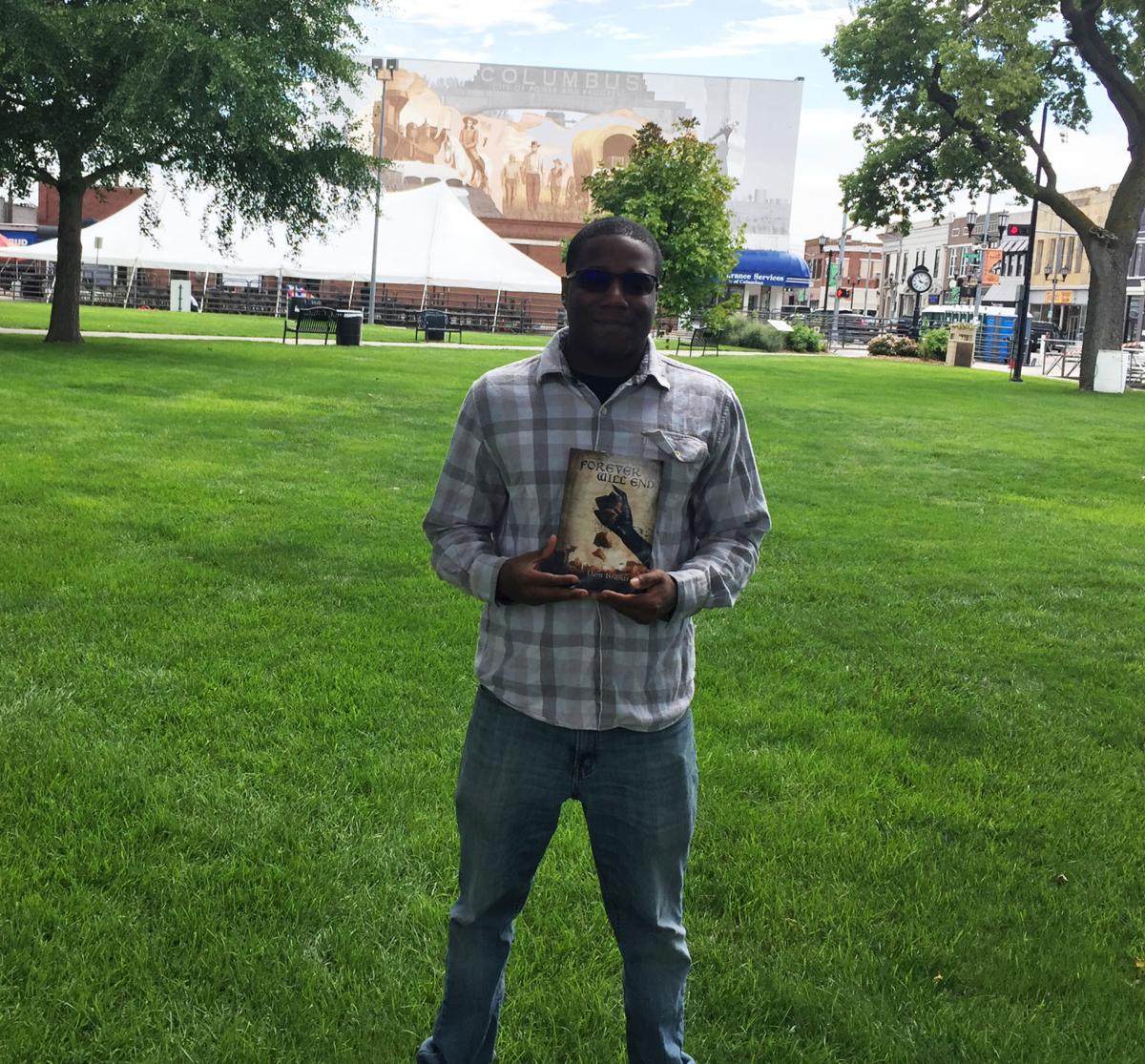 Dom Brandt, a local author, stands in Frankfort Square Friday with his new book, "Forever Will End." The book was self-published last month. 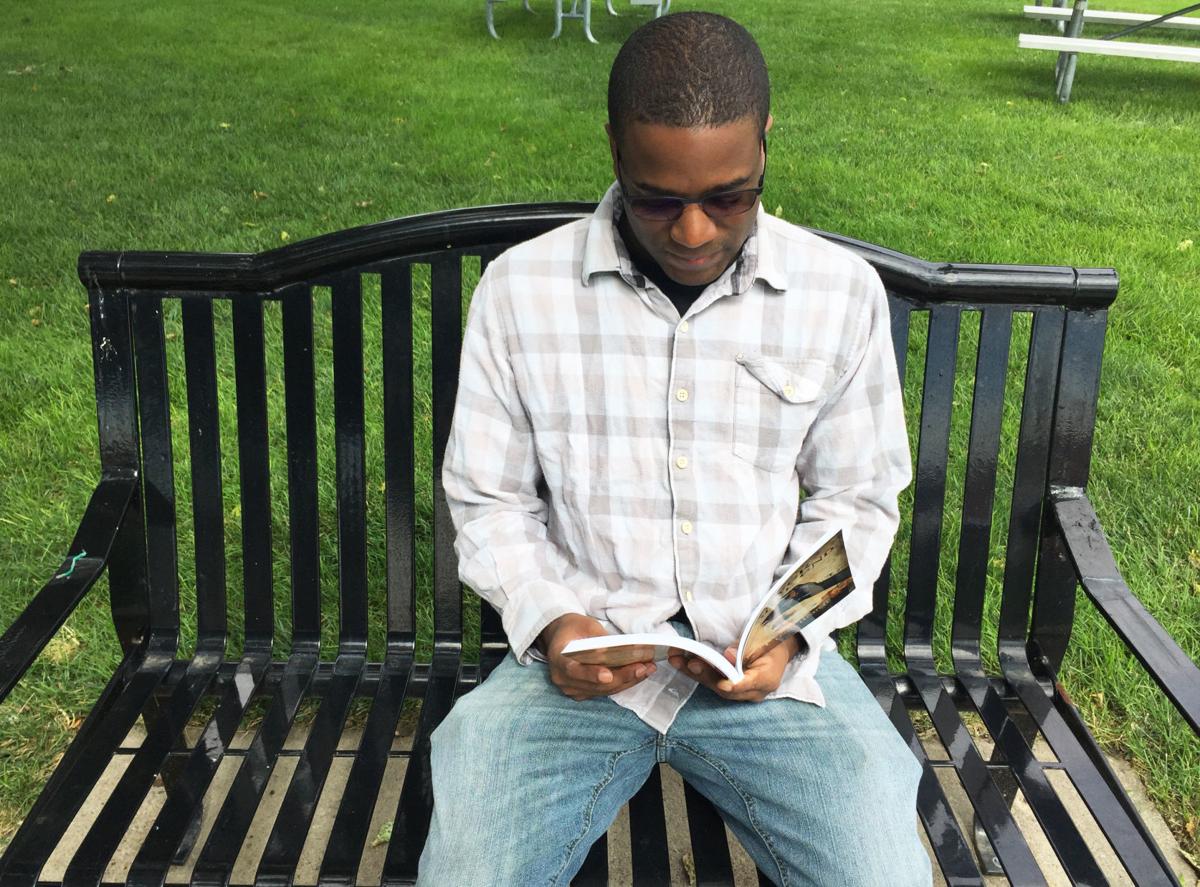 Authors don’t normally get ideas for story titles from their financial adviser, but that proved to be the case for Columbus-area author Dom Brandt.

Shortly after a group of friends discovered a manuscript that he wrote in high school for a fantasy novel, he went to discuss his finances. The introduction to the meeting proved to be the “Eureka!” moment for the book’s name.

Hence, Brandt decided to name the novel “Forever Will End”, paraphrasing the line he gave to his financial adviser. The book, which describes a group of 13-year-olds who are tasked with attempting to prevent total world annihilation, was released last month.

The backstory goes something like this: A group of people known as "the Blessed Ones" was concerned that the world might destabilize when they pass on. Thus, they wrote about the end of all human life through a series of passages designed to detail just what would happen at the end of the world. Eventually, their worst fears come to pass, with death, disease and destruction raining down on the planet. These teens eventually have to learn about a prophecy that predicted the very events happening at that time and join forces to save the world.

The journey to write this book took almost a decade, with the genesis of the idea popping into Brandt’s head during high school at Bishop Newman in Wahoo.

“I’ve always enjoyed writing short stories, especially in high school,” Brandt said. “There was an assignment that we did (where) we had to write a short play. (It) kind of fell off there, I went to college and did all my general education stuff.”

Over the course of 10 years, Brandt wrote the book in fits and starts. He lost interest in the story in college, with his mind going toward working in the criminal justice system. It wasn’t until a few friends of his found his writing in the apartment that he was reminded of the book he started in high school.

“A suitemate of mine, him and several others found it because I lost it,” Brandt said. “I thought I had lost it for a while and they managed to find it and they really liked what they read. The reception I got was almost overwhelming, to a certain degree.”

After the discovery of his novel, Brandt found a name, restarted writing the book and finally finished. But this isn’t just a one-off story.

Like a lot of young adult novels of similar vintage, like "Harry Potter" and "The Hunger Games," “Forever Will End” is intended to be the first in a series of novels. Brandt said he wants his novels to be character-driven and down to earth, and while one couldn’t have a book about the end of the world without having some action in it, his characters begin the process of developing their own identities and growing up as the book progresses.

"His book is really set apart from the genre it belongs to because of a thing that I like to call lateral character development," said Jess Millman, a freelance editor who took on the task of providing the finishing touches to Brandt's book. "We can see how multiple characters change as people, not just in relation to the events of what's going on around them and to the plot, but in reaction to their conversations with each other. How they grow as a unit is separate from how they grow individually. I don't see enough of that in the dark fantasy genre, but I saw it in 'Forever Will End' right away."

Each of the characters comes from a different part of the world. One has supernatural powers and comes from a position of power, while another is locked in a ghetto with no ability to leave. The third is a free-spirited and random character who is essentially the audience’s voice on the action, breaking the fourth wall on a variety of occasions. Millman said that the book reflects issues that affect people with poverty on a daily basis.

"It's a fantasy book on the experience of poverty, not just the academic discussion of poverty," Millman said. "How it can change a person, how it can radicalize them, the different elements that are attached to poverty like police brutality and social stratification - there's a lot to learn experientially from this book. I would hope that any reader, even those who are familiar with the experience of living in poverty, would get something out of this journey."

Brandt attempted to look for someone to publish his book, but he, like many authors, found that task frustrating. As a first-time author, he felt that some publishing firms attempted to take advantage of him.

“For them, it’s a quick buck or it’s a way to manipulate you on the way of how you would like to publish your book,” Brandt said. “They’ll tell you what you want to hear, but for me, it was a difficult process. They told me that they were the No. 1 in all of these things and the service that I got wasn’t really outstanding or up to their expectations. You can do the traditional publishing and the self-publishing (but) this publishing company didn’t even read the story and the last thing that I want to do is provide a service that doesn’t meet the standards or isn’t really likable in a way.”

Because he didn’t like his options, Brandt decided to self-publish with the help of a company called Authorhouse, which helped him get the book out to places like Barnes and Noble, who will sell the book in its locations and online at bn.com. The book is also available to those with Kindles and can be found on the Authorhouse website.

With his intent to publish more books in a series that he refers to as “The Gospel of Chaos Series”, Brandt hopes to continue unwinding what will happen to the main characters and how they defeat the forces of evil.

“It’s the prophecy unfolding (and) the characters growing,” Brandt said. “I do think the dialogue in here between the characters is the selling point. You get a variety of different character interactions and it makes the conflict that much more interesting. It’s kind of how we see ourselves (and) how you have a conversation with this person. You can basically see yourself in this story and that’s how I want the reader to go by it.”

Dom Brandt, a local author, shows his new book, "Forever Will End," Friday in Frankfort Square. The book, intended to be the first in a series, was published last month.

Dom Brandt, a local author, stands in Frankfort Square Friday with his new book, "Forever Will End." The book was self-published last month.