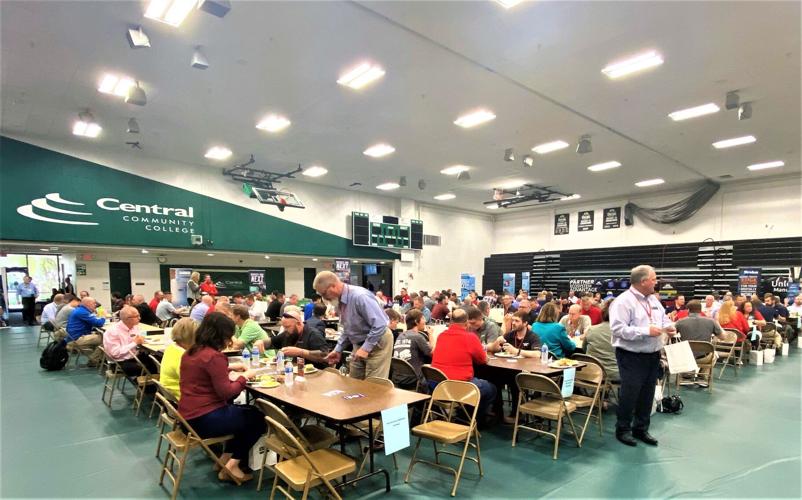 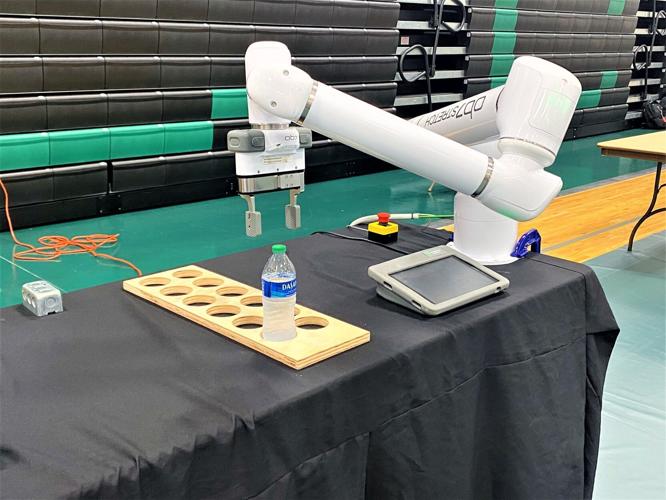 One of the Manufacturing Nebraska's Future booths feature on May 11 a robotic device that can move a water bottle to different places on a wooden board. The machine is used to load and unload packages.

Workforce shortages, training and cybersecurity. These are some of the issues CED Profit Center Manager Camden Van Brocklin has been facing.

Throughout the COVID-19 pandemic, Van Brocklin said he heard from the Nebraska Chamber that similar problems arose from statewide manufacturers.

“People were having a hard time finding the solutions that were local to Nebraska,” said Van Brocklin, who is based in Columbus.

With CED being a technology manufacturing company, the business works through “a huge ecosystem of partners” that could help provide such assistance to organizations, he noted.

“We wanted a manufacturing event focused around the problems that manufacturing is seeing in Nebraska and focus on getting them the solutions that are needed to them,” Van Brocklin said.

“We want them to become bigger and better and lean into the manufacturing technologies and get them to that next step,” she said. “That’s because we’re here to help those manufacturers build strong communities and we’re here for that. We’re here to support, build and help.”

Attendees got an eyeful on state-of-the-art technology that statewide businesses are using for their operations. A virtual reality handset was on display at one station while another showcased robotics by having a machine that can unload and load packages.

The event also saw discussions about modernization threats and opportunities, financial options and challenges and best practices. Later, there were technology demonstrations showcasing the aforementioned new types of tech.

Van Brocklin said he believes Nebraska Chamber President Bryan Slone summed up the state’s manufacturing at the moment. Nebraska is ranked 36th in research and development spending, around $16,000 per person behind productivity annually and around a 60% automation potential yet realized, he added.

“Nebraska isn’t behind because we lack hardworking people – anyone will tell you we have hardworking people in Nebraska – but we’re behind because they don’t have the tools to succeed,” Van Brocklin said. “There are other communities and states that have done a lot to adapt to technology early on and they’re seeing the benefits. Nebraska – being kind of isolated – has missed out on some of that growth. So now it’s go time. We want to stay relevant and a strong manufacturing state.”

Earlier in the day, about 100 Columbus area high school students toured the manufacturing technology expo. They also had the chance to tour the college’s advanced manufacturing classrooms and facilities.

Van Brocklin said the event was also geared for teens as a way for them to garner interest in the trades. He added it’s a very well-known secret that the field is struggling at the moment.

“We’re having a hard time getting people to community colleges to learn about manufacturing,” he said. “We thought, ‘While we have all this cool technology in the same room and all these great companies, why don’t we bring in high schools from around the area to be curious and enjoy some of the cool conversations.’ Hopefully, it inspires them to pursue careers within manufacturing.”

One of the Manufacturing Nebraska's Future booths feature on May 11 a robotic device that can move a water bottle to different places on a wooden board. The machine is used to load and unload packages.