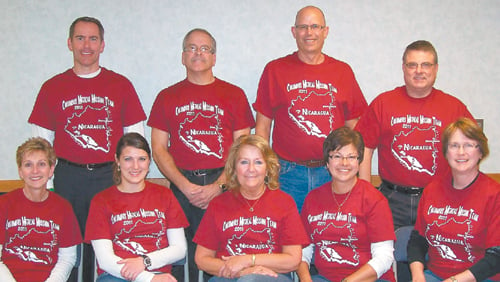 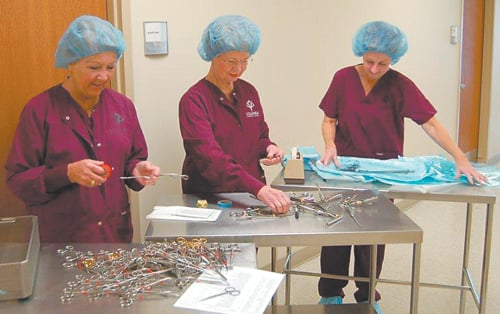 The 10-member team will leave for Nicaragua Thursday, with a scheduled return of Feb. 12.

The purpose of the trip is to provide urgent medical care in a city that maintains only substandard medical care and has electricity only about 20 percent of the day. Puerto Cabezas is a city of 60,000.

The focus of the mission is to perform medical and surgical treatment of the ear, nose and throat.

The team has partnered with Forward Edge International, a non-profit nondenominational Christian mission agency from Vancouver, Wash., that has missions all over the world including several in Nicaragua.

Forward Edge International assisted in coordinating the team’s logistics for the trip.

Nila Novotny said Nicaragua is second only to Haiti in its level of poverty in the Western Hemisphere. She said the average income is just $2 per day, physicians income is about $400 per month and nurses make $200 per month.

Nicaragua is the largest country in Central America, being about the size of New York state with a population of 5.9 million people.

It is estimated nearly 3.3 million Nicaraguans do not have access to adequate medical services. Nearly 48 percent live below the poverty line.

Novotny said recent communication with the clinic showed there are already cleft lip and palate patients who have been waiting outside the clinic for three weeks.

“We anticipate up to four young children as well as two adults who have never been repaired,” Novotny said.

Novotny said the team’s safety is of paramount importance and they will be accompanied by local medical personnel at all times and will stay in a safe, locked and guarded mission compound during their stay. She said armed guards patrol the compound throughout the night, and a watchman is stationed at the gate.

“We want to thank many individuals and businesses who have given us the generous donations of time, money and supplies,” said Dr. Novotny. “We’ve been able to take much needed medical supplies, tools, medicine, bandages, etc. as well as donate books to the fledgling medical school.

“Our hope is that we can help train, supply and  educate the local medical community so that they can take care of themselves.”

Readers can follow the Columbus Medical Mission Team mission trip by viewing their blog at www.columbusmedicalmission.blogspot.com.

COLUMBUS - The Columbus Medical Mission Team, a group of Christian physicians, nurses and support team members, is making preparations for a m…

Watch Now: What does Lake Mead’s drought mean for the West?

Watch Now: What does Lake Mead’s drought mean for the West?

Columbus Medical Mission Team members Carolyn Athey left, and Connie Mohatt, right, along with A retired nurse, volunteer Marlene Engle, prepare surgical equipment for use in the mission team’s trip to Puerto Cabezas, Nicaragua.
© Copyright 2021 The Columbus Telegram, 1254 27th Ave. Columbus,NE | Terms of Use | Privacy Policy | Do Not Sell My Info
Powered by BLOX Content Management System from TownNews.com.
You don't have any notifications.