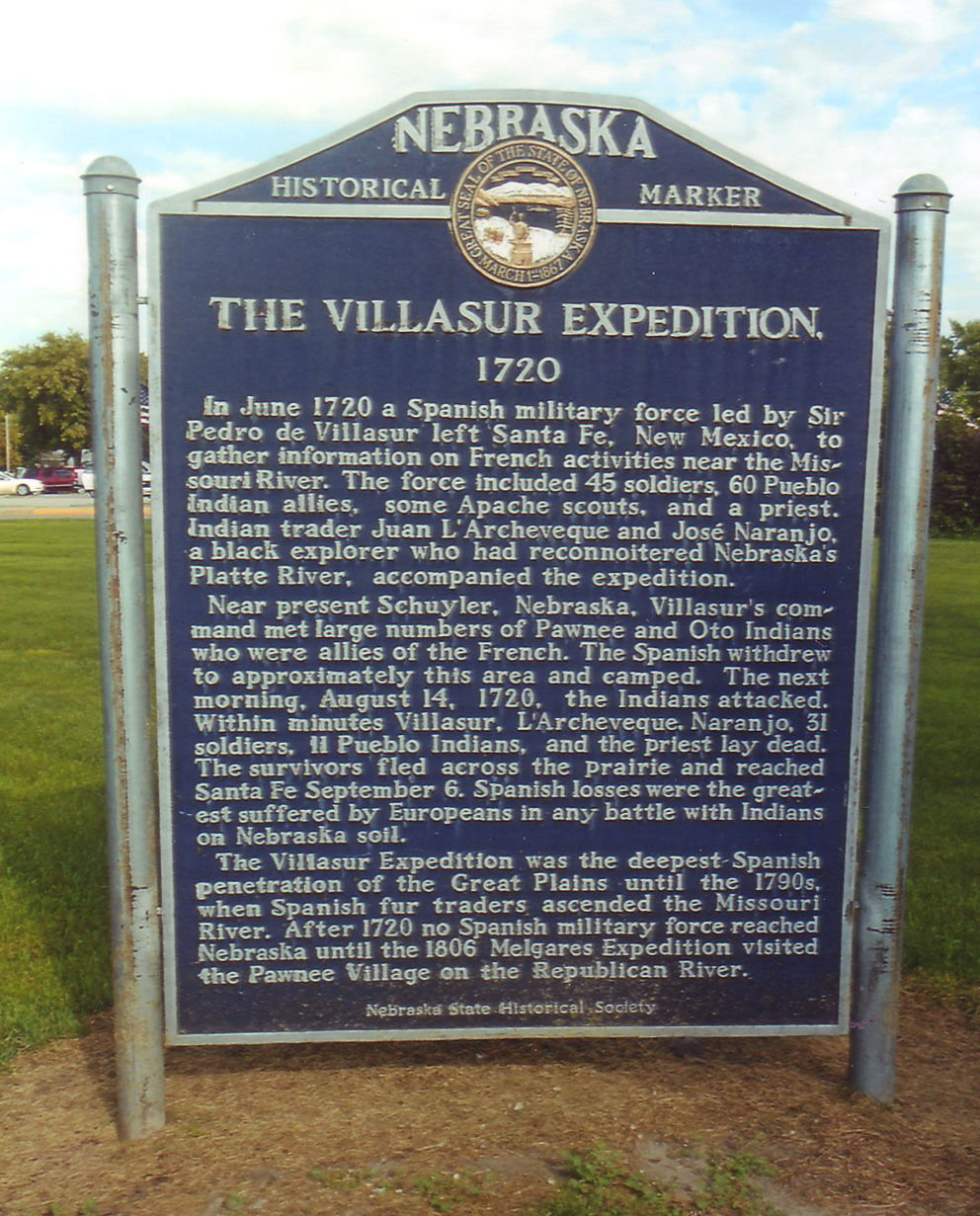 The Villasur Expedition historical marker in Pawnee Park details a Spanish military mission led by Pedro de Villasur. The group, which left Santa Fe, New Mexico, to gather information on French activities near the Missouri River, was attacked by Pawnee and Oto Indians.

A skin painting was commissioned to illustrate the 1720 battle between Pawnee and Oto Indians and a Spanish military force.

Near present Schuyler, Nebraska, Villasur’s command met large numbers of Pawnee and Oto Indians who were allies of the French. The Spanish withdrew to approximately this area and camped. The next morning, August 14, 1720, the Indians attacked. Within minutes Villasur, L’Archeveque, Naranjo, 31 soldiers, 11 Pueblo Indians, and the priest lay dead. The survivors fled across the prairie and reached Santa Fe September 6. Spanish losses were the greatest suffered by Europeans in any battle with Indians on Nebraska soil.

The Villasur expedition was the deepest Spanish penetration of the Great Plains until the 1790s when Spanish fur traders ascended the Missouri River. After 1720 no Spanish military force reached Nebraska until the 1806 Melgares Expedition visited the Pawnee Village on the Republican River.”

“The Spanish withdrew to approximately this area and camped.” This sentence of the marker narrative is misleading given the actual location of the marker. It was also misleading when the original marker was located near the old weigh station (scales) south of the Loup River bridge at the junction of highways 30 and 81 ... the one that washed away in the 1993 flood.

The marker should read, “The Spanish withdrew to the point of land at the confluence of the Loup and Platte rivers.” That would put the massacre site east of Camp Pawnee and south, southeast across the Loup from Quail Run Golf Course. A Spanish painting of the Villasur Massacre made in the 1700s seemed to verify this location. Recent research, however, suggests that maybe the confluence of the Loup and Platte in 1720 was a couple of miles farther east than it is now. The actual site of the massacre, therefore, may have been close to the tailrace.

Twenty-four days after the 1720 massacre, a few survivors of the Villasur Expedition made it back to Santa Fe. A government inquiry was convened. In preparation for the inquiry, a skin painting was commissioned to illustrate the battle. A very colorful 17-by-4 1/2-foot massacre mural was painted on three skins (probably buffalo hides) sewn together showing the massacre occurring on the point of land formed by the confluence of two rivers.

In 1758, Father Philipp von Segesser, a Jesuit missionary to the Indians of Sonora Province in Mexico, obtained the Villasur painting along with a second similar-sized mural of a Spanish-Apache Indian battle. He sent the two paintings to his family in Lucerne, Switzerland, as a gift.

Then, as sometimes happens, the entire matter, paintings and history, disappeared so to speak ... until following World War II when a Swiss scholar of American Indian history and culture learned of the existence of the paintings in his country. The paintings were owned by a Lucerne family, descendants of Father Philipp Segesser. The scholar, Gottfried Hotz of Zurich, spent the next several years studying and writing about the paintings.

Fast forward to the 1980s. Columbus residents, the late Emiel Christensen and Florence Brugger, read about the hide paintings and history in Gottfried Hotz’s book, "Indian Skin Painting from the American Southwest," University of Oklahoma Press, Norman, 1970. The book told about the Segesser paintings and how one of them (known as Segesser II) depicted the Villasur Massacre at the confluence of the Loup and Platte rivers. The paintings were still owned by Father Philipp’s descendants, the Segessser von Brunegg family of Lucerne, Switzerland.

During the summer of 1982, Christensen and Brugger conveyed their enthusiastic interest in the Villasur Segesser painting to Virginia Curry II, daughter of Mr. and Mrs. W.A. Curry of Columbus. Ms. Curry (law degree, Creighton University and master's degree in international management, Louvain, Belgium) was home visiting her parents that summer. Since Curry planned to visit Switzerland in the fall, she decided to attempt to locate the hide paintings. She retained a Zurich attorney to assist her. Successfully locating the Segesser paintings, Curry described her first look at them:

“In a dark and dusty upper room of Dr. Andre von Segesser’s Lucerne, Switzerland mansion, he opened a rickety old door to a small closet from which he removed the hides. I was likely the first American to view the paintings since they left New Mexico in the late 1750s. They were wrapped in newspaper ... . Nonetheless, they looked absolutely magnificent. They were much larger than I’d expected and the colors were amazingly vibrant. I was thrilled to see them and quite enthused about the prospects for an exhibition of the Segesser II (the Villasur Massacre painting) in Nebraska.”

Through her Zurich attorney, Dr. Eric Ferraris, Curry worked toward an agreement with von Segesser for a loan of the Villasur painting for an exhibition at the Joslyn Art Museum in Omaha or possibly the State Historical Society Museum in Lincoln. As time went on, however, Dr. von Segesser feared the bureaucratic procedures, and being of an advanced age, wished to avoid the paintings being on loan for an extended period. He decided he wanted to sell the hide painting and put a price tag on them of $1.5 million to $2 million.

News of von Segesser’s intent to sell the paintings was a great disappointment to Joslyn and the State Historical Society, neither of which could negotiate a purchase. Dr. Ferraris, Curry’s Zurich attorney, when he wrote his regrets to them said, “ ... it essentially also means that all the efforts ... and hard work of Ms. Curry, who was the person to identify, locate, and view the precious skins and to follow up this exhibition project (at considerable personal time and expense, I gather) are to be in vain ... .”

Curry’s efforts, however, were not altogether futile. The Joslyn Museum notified Dr. Thomas E. Chavez, director of the Museum of the Palace of Governors in Santa Fe, of the availability of the hide paintings since that state too would have great interest in them. Eventually Dr. Chavez arranged for an exhibition of the paintings in Santa Fe and subsequently his museum purchased them for about $400,000.

In 1987, in order to get a copy of the Villasur Massacre hide painting to Nebraska, the mural was copied from slides made of the original. Curt Peacock, a Nebraska State Historical Society staff member, photographed the original bison hide mural on transparency film. Each transparency was then reshot on 35-millimeter film so it could be projected onto cowhide while he repainted (copied) the massacre mural. This copy now hangs at the entrance of the “First Nebraskans” exhibit at the Nebraska Historical Society’s Lincoln museum.

A full-scale print of the massacre painting is also displayed at Columbus Public Library. The Columbus reproduction was made from a photograph owned by the Nebraska State Historical Society. If you’ve never seen the painting, please stop by the public library sometime and take a look. You will be impressed.

Reprinted from the June 2012 issue of the Platte County Historical Society newsletter.

Gordon L. Steinbrook is a native of Nebraska who received his elementary and secondary education in Saline County. He earned his undergraduate and graduate degrees from the University of Nebraska-Lincoln. He is a retired U.S. and Plains history teacher who taught 36 years at Columbus High School.

He is a Vietnam War veteran and retired from the U.S. Army Reserve as a lieutenant colonel. Steinbrook is author of "Allies and Mates: An American Soldier With the Australians and New Zealanders in Vietnam, 1966-67," which was published by University of Nebraska Press in 1995.

In 2006, he wrote "The Columbus Town Company" in honor of the city's sesquicentennial celebration sponsored by the Columbus Area Chamber of Commerce. Steinbrook is a member of the Platte County Historical Society Board of Directors. He and his wife Frances reside in Columbus.

Over the past 10 years Steinbrook has written monthly Platte County Historical Society newsletter articles. His articles appear in The Columbus Telegram with permission from the historical society and author.

The Villasur Expedition historical marker in Pawnee Park details a Spanish military mission led by Pedro de Villasur. The group, which left Santa Fe, New Mexico, to gather information on French activities near the Missouri River, was attacked by Pawnee and Oto Indians.

A skin painting was commissioned to illustrate the 1720 battle between Pawnee and Oto Indians and a Spanish military force.