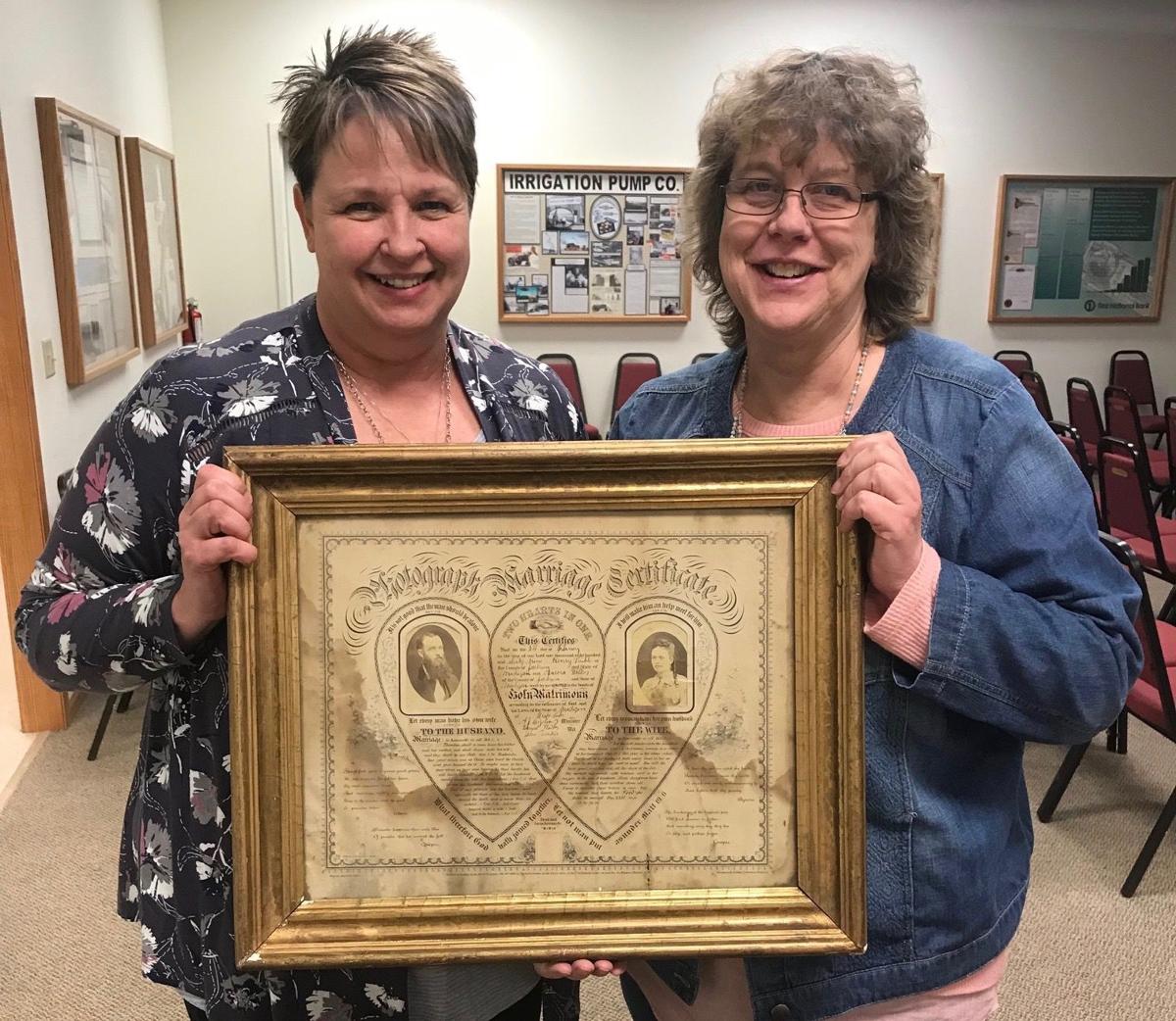 Jane Lindsay of Pierce, left, holds up a 140-year-old marriage certificate on Saturday at the Platte County Museum with her sister, Joan Schade, of Cheyenne, Wyoming. The certificate belonged to their great-great grandparents and was returned to them by the museum after it was recently discovered in storage. 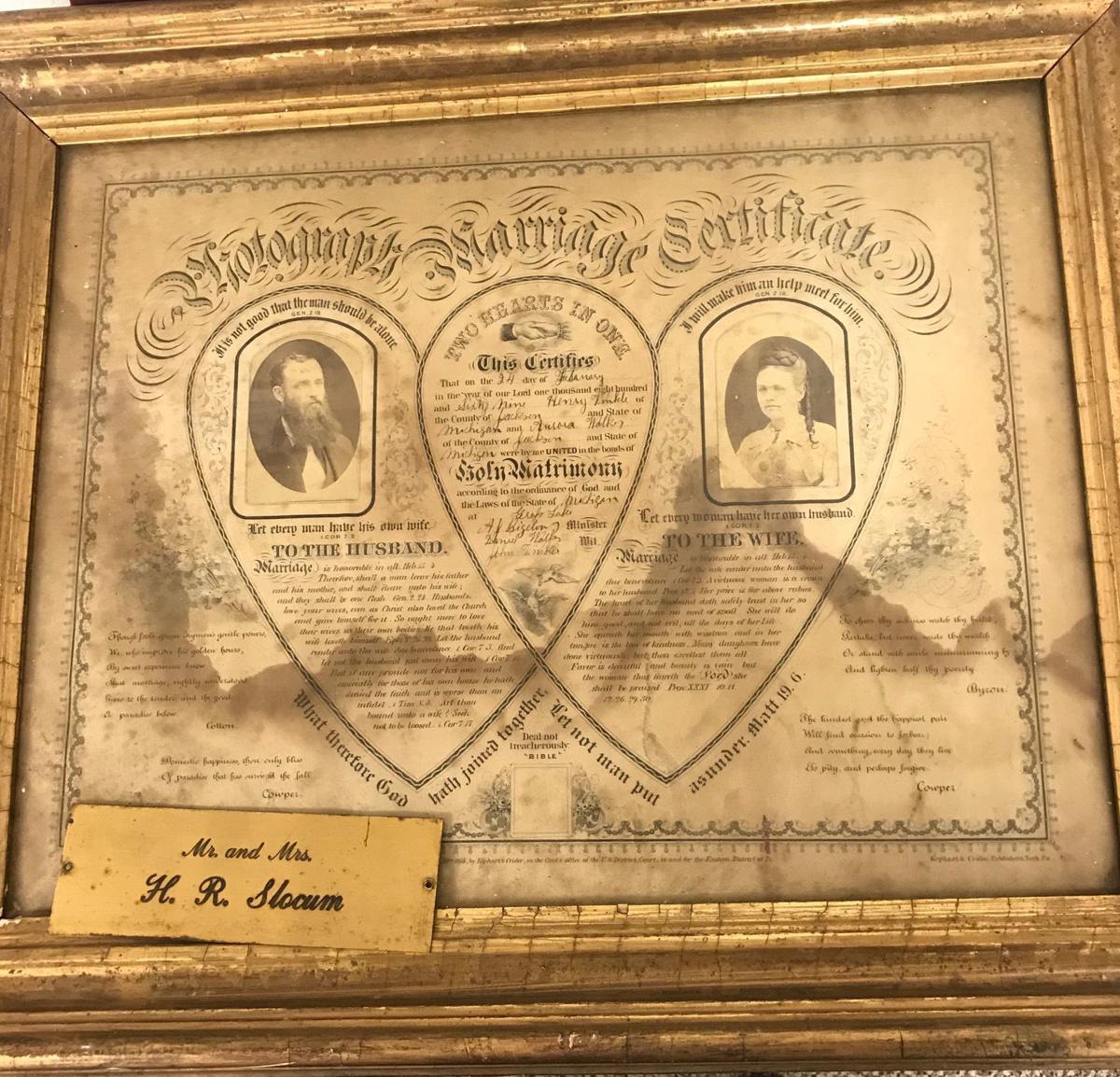 A 140-year-old Michigan marriage certificate was recently found in storage at Platte County Museum. Since the item does not relate to Platte County, it was returned on Saturday to the descendants of the married couple.

A mystery was recently uncovered at the Platte County Museum while one of its storage rooms was being cleared out.

Museum Executive Director Cheri Schrader said a Michigan marriage certificate dating back to 1869 was discovered, but the museum had no record of it. Pictured on the water-stained framed document were two portraits of the bride and groom. Since the piece was something the museum would never put on display, Schrader started making an effort to return the heirloom to its rightful owner.

“It had not been inventoried, so we really didn’t know much about it,” Schrader said about the certificate.

But, Schrader said she had some clues.

A metal plate on its frame read “Mr. and Mrs. H. R. Slocum." After some research, Schrader learned of a man named Hank R. Slocum, who once lived in Columbus.

According to his 1965 obituary published in The Columbus Telegram, the man was quite active in the local community. Slocum was instrumental in developing many parks in the city and was a member of the Freemasons (Lebanon Lodge No. 323), The Elks Lodge, The Lions Club, the Columbus Area Chamber of Commerce and the American Legion - having served in the U.S. Army during World War I. He was also a member of the United Fund and served as president of the board of directors in 1962.

It was the marriage of Slocum's grandparents that the certificate documented. After some more digging, Schrader came across one of his grandchildren, Jane Lindsay, of Pierce. She mailed her a letter explaining the situation and asked if the family would like the item returned.

“It broke my heart to think of throwing it away,” Schrader said. “So through Find A Grave.com and Ancestry.com and Facebook and everything, I stumbled upon (the family).”

Lindsay agreed, and on Saturday, she and her sister, Joan Schade, of Cheyenne, Wyoming, made a stop in Columbus to pick up the certificate while on their way to a bridal shower in Lincoln.

The two sisters said they aren’t sure how the marriage certificate for their great-great grandparents ended up at the museum, but they have a theory. A company was hired to clean out their grandparents' house after their grandmother was moved to a care facility out of state. The family must have left the certificate behind and the company most likely dropped it off at the museum, the sisters said.

Why it was never inventoried will probably remain unsolved.

Lindsay said she plans to show the certificate to her four sons and send pictures of it to various cousins and other relatives. She said she hopes to one day pass it on to her children who will, in turn, pass it on to theirs.

"I think it’s a great thing. I’m excited to show all my sons and somewhere along the line my grandchildren,” Lindsay said. "I’ll keep it until I’m ready to pass it on to my children. I just think it's cool that it was kept as well as it was.”

From Silver Jesus to silver fox: Brandenburg donates 12 inches to Wigs for Kids

The smell of gasoline filled the air on Friday afternoon as the first cars drove across the newly-opened 12th Avenue Viaduct. Old-timey cars l…

Columbus will have the chance to experience a unique performance starting Oct. 8 as the United States’ first traveling water circus will stop …

Jane Lindsay of Pierce, left, holds up a 140-year-old marriage certificate on Saturday at the Platte County Museum with her sister, Joan Schade, of Cheyenne, Wyoming. The certificate belonged to their great-great grandparents and was returned to them by the museum after it was recently discovered in storage.

A 140-year-old Michigan marriage certificate was recently found in storage at Platte County Museum. Since the item does not relate to Platte County, it was returned on Saturday to the descendants of the married couple.