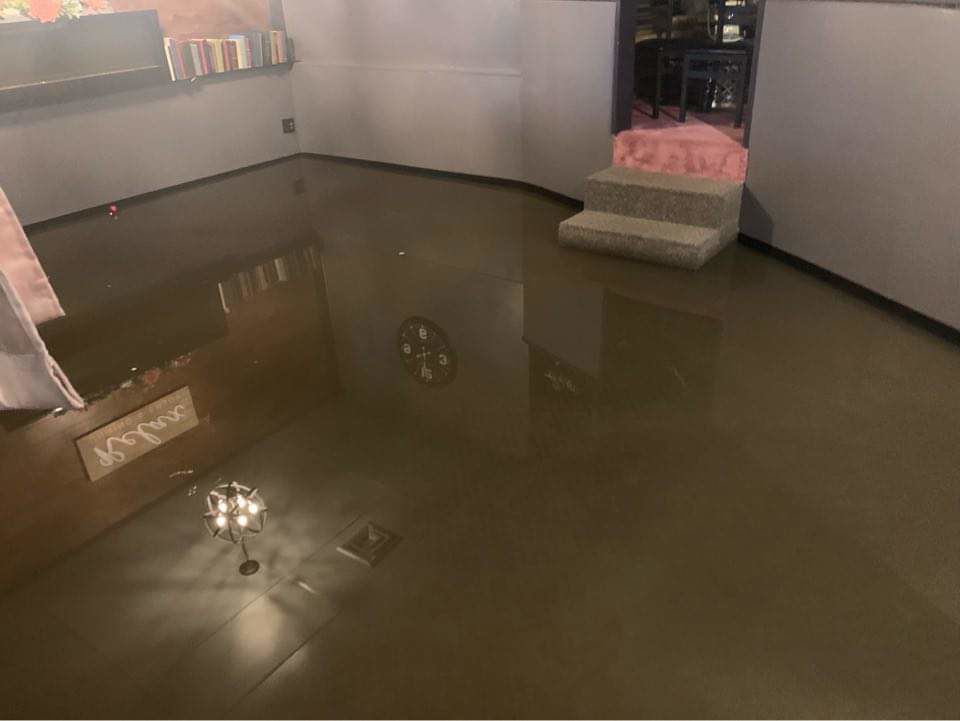 The flooding in the basement of the Park Plaza building. 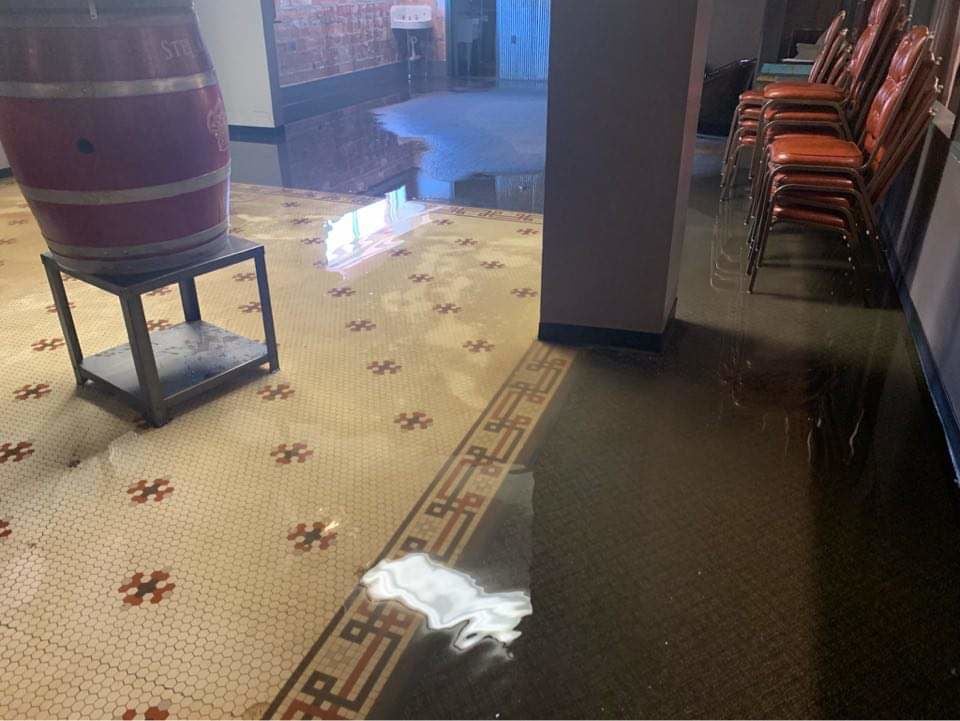 The floodwaters in the basement. 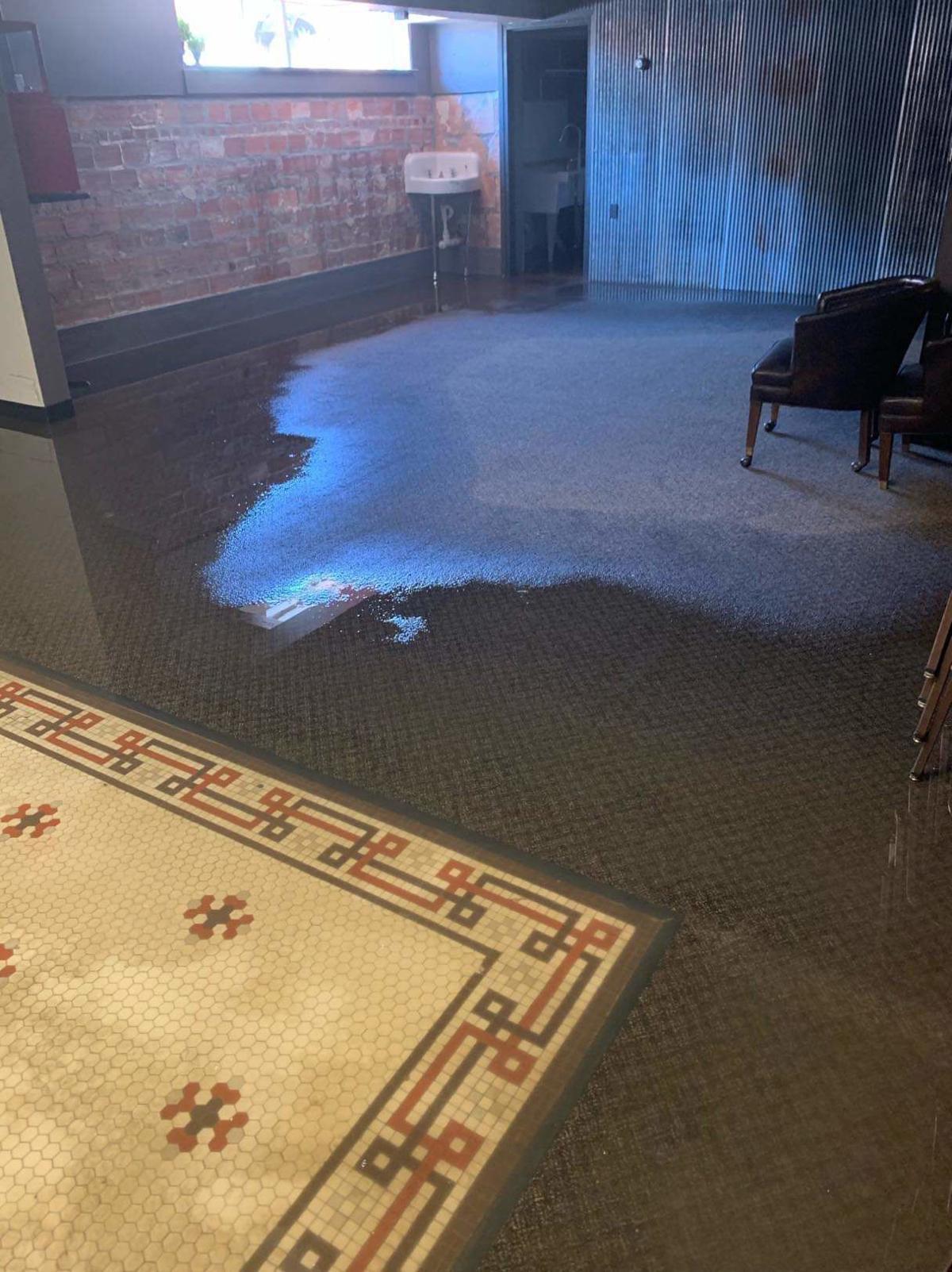 Flooding can be seen in the basement. 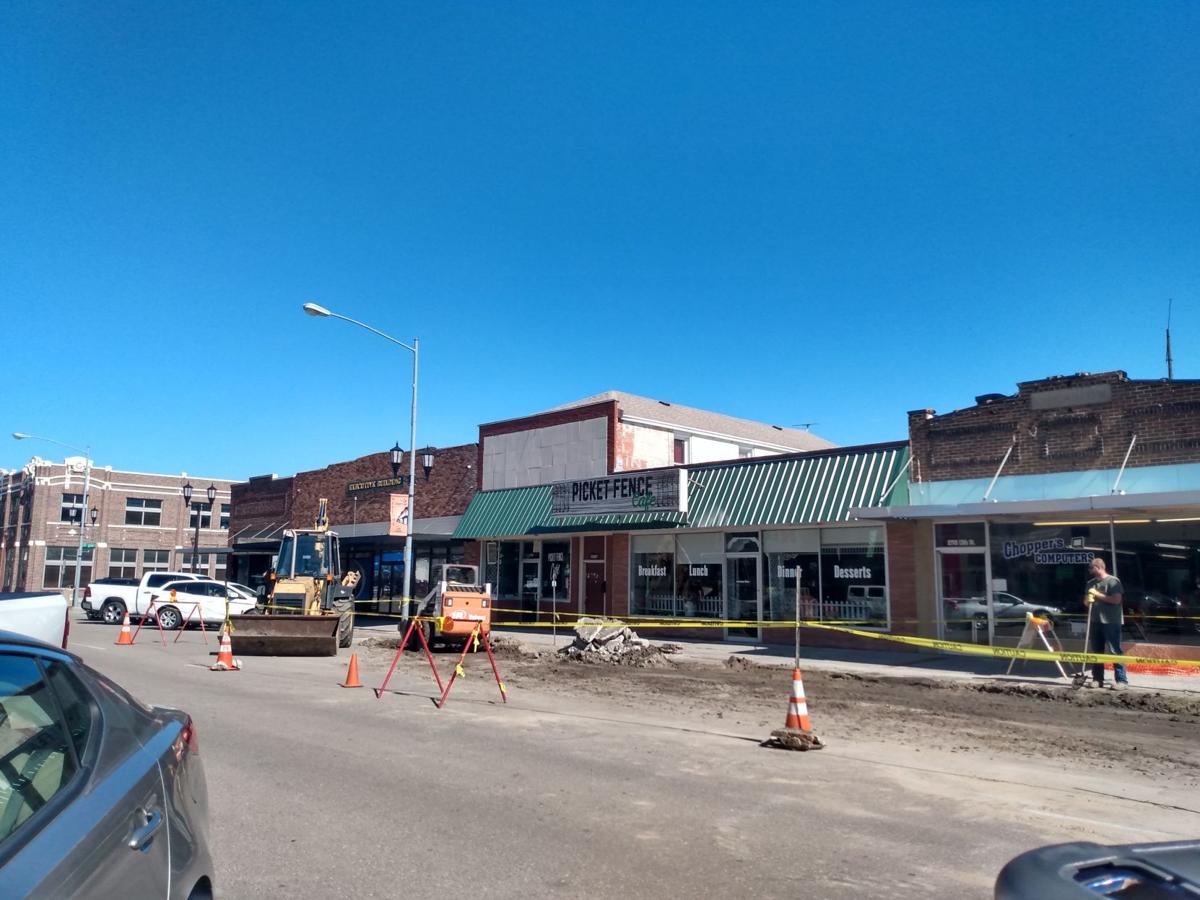 View of 13th street with a roped off section. 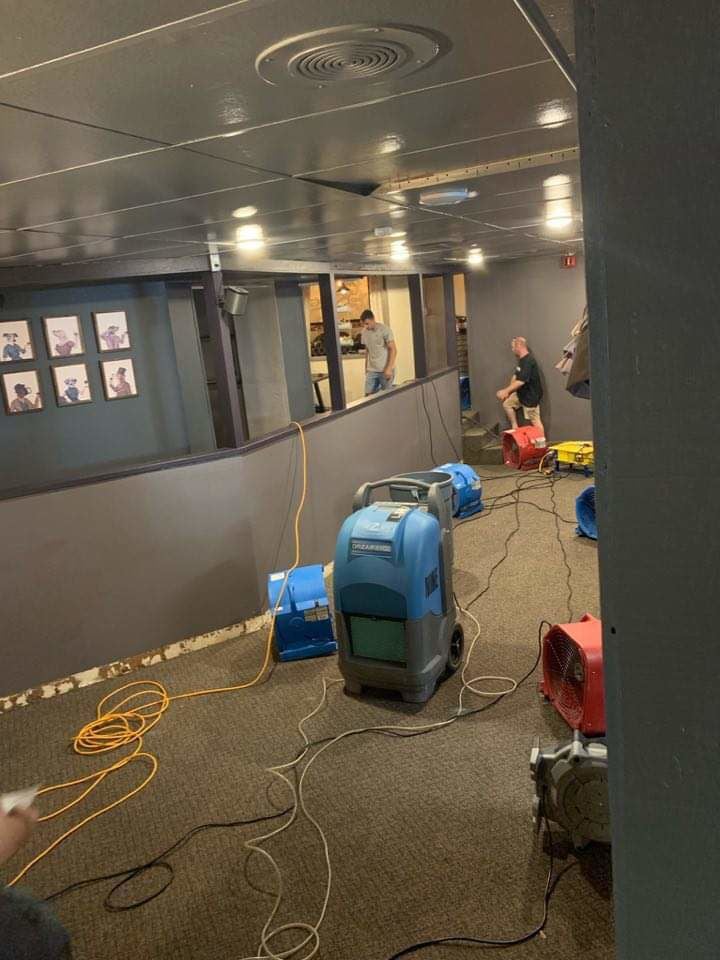 Fans cover the floor to help dry the area after it was flooded. 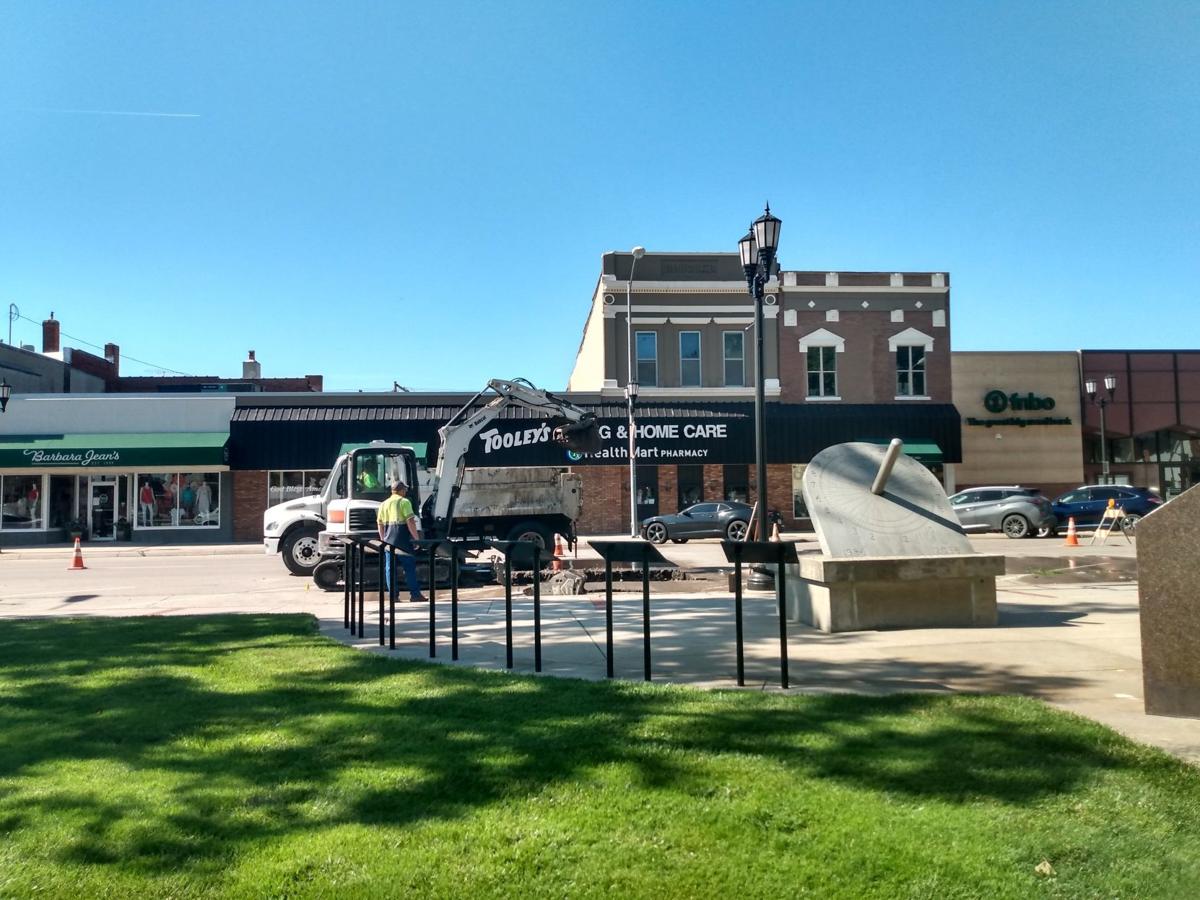 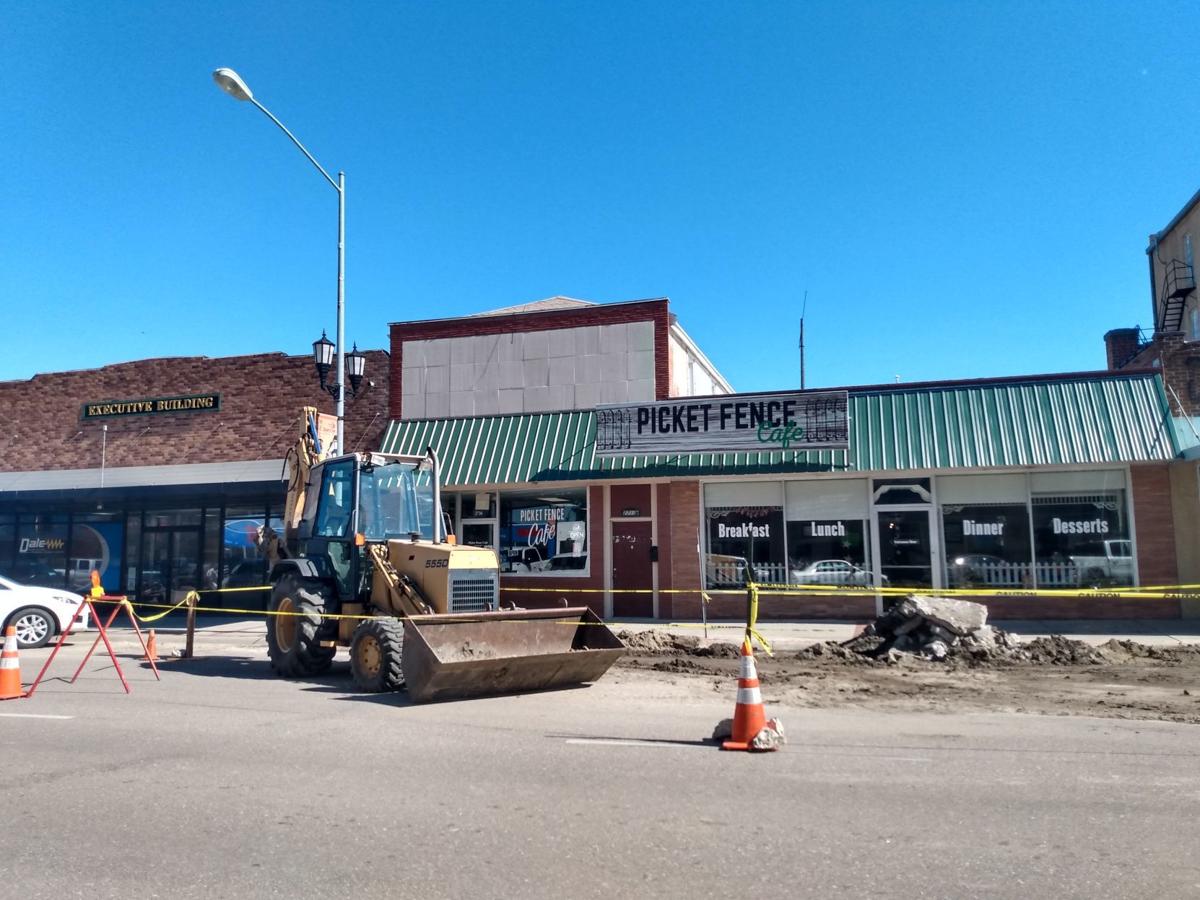 Machinery outside of a business on 13th street Wednesday morning.

A repair on 13th Street appears to have gone wrong as a business in downtown Columbus was flooded Tuesday.

Cork & Barrel, which is located in the basement of the Park Plaza Apartment Building, 1354 27th Ave., flooded again during a scheduled repair Tuesday, said building owner Beth French. It's a bit of déjà vu as Cork & Barrel flooded this past November after a downtown water leak. French said the repair Tuesday was to take care of the pipe that burst during that time.

French said the flooding occurred because the City of Columbus didn’t turn the water off. The City told them it was off at a quarter to 8 a.m., she said, but then when the plumbers cut into the pipe around 9:30 a.m., it exploded and the shutoff valve popped off.

The City was supposed to turn off the water at 8 a.m. and leave it off for four hours, which Chuck Sliva, Public Works director for the City, confirmed was the request.

Sliva said it was unclear if the contractors checked to see if the water was completely shut off. He said he was was not on scene at the time Tuesday morning and that City officials are still looking into what happened.

“The Central City plumbers were down in a 9-foot hole. When they cut the old pipe it basically exploded. The shutoff valve popped off. There was a mass explosion of water. Within under one minute, the whole 9-foot hole filled, and the water was in my basement. It was unbelievable,” French said. “I’ve never seen such fear in a face to get out of there. They were in disbelief.”

The delay in fixing the pipe was due to difficulty in finding a plumber, she noted.

“Oh, there’s a lot of damage. All the flooring again. My water heater, my boiler. Because we were here at the time that it happened we got pumps going right away. We were able to salvage all of Cork & Barrel's furniture because we got it up high enough,” she said. “But the flooring, some of the walls, were destroyed again.”

Last time, neither the City nor her insurance covered it, French said.

“Nicole (Saalfeld, Cork & Barrel's owner) and I absorbed the entire loss,” she said. “I’m a little concerned. I’m feeling hopeful we’re going to get some help this time. I’m sure the City will do the right thing.”

Cork & Barrel is closed for at least a week to dry everything out again, French said, but Saalfeld is hoping to possibly open soon for carry out cocktails.

“My heart really hurts for her. It’s been a rough 2020, all the way around with the businesses, especially small businesses, and then you throw this in twice,” she said. “I hope everyone will support Nicole to help her get back on her feet. She has worked so hard.”

Sliva said while the service line was being redone, one of the isolation valves wasn’t holding or didn’t shut all the way and the valve blew up, which flooded the street and the trench. He said they shut down a larger area.

A line also broke in front of Tooley’s.

“The City water crew is working that. We got a busted water line there. We don’t know if it’s a private service or a main,” Sliva said. “The original plan was to shut down one block. We ended up going from 28th to 26th street.”

When the main gets jarred it is possible to break a line, said Sliva, but the break outside of Tooley’s could be just a coincidence. They are investigating that right now, he noted.

Owner Tim Tooley said apparently it started last night and somebody must have reported it to the City as crews were already working on it this morning. He said nothing in the store was affected.

“Right now it’s just bubbling up from the asphalt and going into the storm drain,” Tooley said. “The City employees are very responsive to keeping us informed of the situation.”

The 13th Street project was a private project, said City Engineer Rick Bogus, although there are other public construction projects going on as well as a couple more planned for the rest of the summer.

“The City is out there assisting because it’s our water line but it’s not a City project,” Bogus said.

Although COVID-19 has impacted sales tax receipts, only a couple of this year’s projects were impacted and Bogus said they have no plans as of now to seriously delay any future planned projects.

“There’s a lot of work in Columbus every summer so it might seem, you know a lot of work is being done in the downtown area, so it might seem like it’s a lot more, it’s kind of concentrated in one area. But we always do a lot of this type of work around town,” Bogus said. “So 15th Street is a total reconstruction from 27th Avenue to 33rd Avenue. We are replacing water lines that were old in the area. The road condition of that segment was in poor shape.”

The City is also widening 15th Street to allow for better passage of cars, Bogus said, and it should be “substantially complete and ready” by this fall.

The City is also upgrading the sidewalks and the ADA ramps.

The project is partially funded through a Community Development Block Grant and the rest of it is paid through City sales taxes and highway allocation money. The contract is through Gehring Construction & Ready Mix of Columbus, he said.

The 12th Street viaduct is also still under construction and will be finished later this year, along with various other concrete patching and two asphalt overlay projects. One is on 14th Street from 23rd to 33rd avenues, which will involve new ADA ramps and curb work. The other is on Howard Boulevard.

Both are scheduled to be done in July. The asphalt projects got moved from June to July because of COVID-19 delays regarding safety measures. Less is going on downtown, so there were no obstacles to rescheduling.

Next year, there is a state project that is a total reconstruction on part of 23rd Street, Bogus said. There will be beautification work done as well. Most of it is paid for by the Nebraska Department of Transportation but the City pays some as well, he said.

The flooding in the basement of the Park Plaza building.

The floodwaters in the basement.

Flooding can be seen in the basement.

View of 13th street with a roped off section.

Fans cover the floor to help dry the area after it was flooded.

Machinery outside of a business on 13th street Wednesday morning.