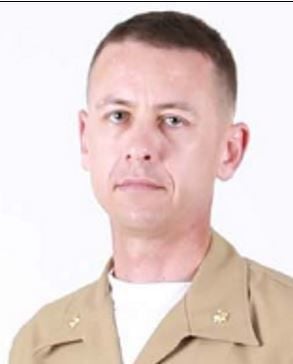 The funeral service will be held at 9:30 a.m. on Saturday, Sept. 18, 2021, at St. Isidore Catholic Church in Columbus, Nebraska, with the Rev. Joseph Miksch officiating. Interment will be at the All-Saints Catholic Cemetery after the service with full military honors conducted by the U.S. Marine Corps. Visitation will be from 4 p.m. – 7 p.m. on Friday, Sept. 17, 2021, at Gass-Haney Funeral Home with a rosary to follow.

Robert E. Dush was born Oct. 29, 1978, in Sioux City, Iowa. He was one of five children born to Dorothy Dush. Rob grew up and attended school in Columbus, Nebraska, graduating in 1997 from Columbus High School. After graduation, Rob enlisted in the Marine Corps and was stationed at Marine Corps Air Ground Combat Center (MCAGCC), also known as 29 Palms. After boot camp, he was stationed at Camp Pendleton where he met his future wife, Viladda Dush. Through that union, Rob welcomed two sons, Jonathan and Jeffrey. They were married on April 3, 2006, in San Diego, California. In July of 2012, the marriage was blessed with their son, Ryan.

Lt. Col. Dush graduated summa cum laude from Southern Illinois University in 2002, and was commissioned as a Marine Second Lieutenant through the Officer Candidates Course Program in 2006. In 2007, he reported to 1st Marine Logistics Groups where he served as the officer in charge (OIC) of the travel settlement section, OIC of the pay section, deputy disbursing officer, and briefly as the disbursing officer. In 2010, he reported to the Marine Corps Administrative Analysis Team-West for duty as the deputy OIC. In 2014, he attended the Naval Post Graduate School prior to reporting to 1st Marine Aircraft Wing (MAW) for duty as the information management officer. In 2017, after successfully completing his payback tour, he was assigned as the deputy, AC/S comptroller at 1st MAW. In 2020, he was promoted as the division comptroller.

He has multiple worldwide deployments and assignments including Operation Iraqi Freedom I and II, Western Pacific (WESTPAC) deployment with 13th Marine Expeditionary Unit aboard U.S.S. Boxer, Cobra Gold in Thailand, Korean exercises, and Operations Native Fury in both Bahrain and Jordan.

Lt. Col. Dush graduated with honors from The Basic School and Financial Management School. He attended Expeditionary Warfare School (non-resident) and Command and Staff College (non-resident), graduating with distinction. He earned a master of science in information technology management and master of business administration with highest distinction at the Naval Postgraduate School. He attended resident Command and Staff College at Marine Corps University and completed the master of military studies program.

Rob enjoyed many things in his life such as spending time with family and friends. He loved to host a good party and was a master on the grill at barbecues. Rob spent a lot of his days with his dog DW, she was his shadow. Rob enjoyed running and participating in marathons. He completed marathons in San Diego, Burma, Boston and several more. His passion in life was traveling (30-plus countries) with his wife and exploring new cultures. Everything Rob did was to challenge himself and to become a great leader; he spent hours reading and writing.

Preceding him in death were his grandparents, Charles and Dorothy Dush.