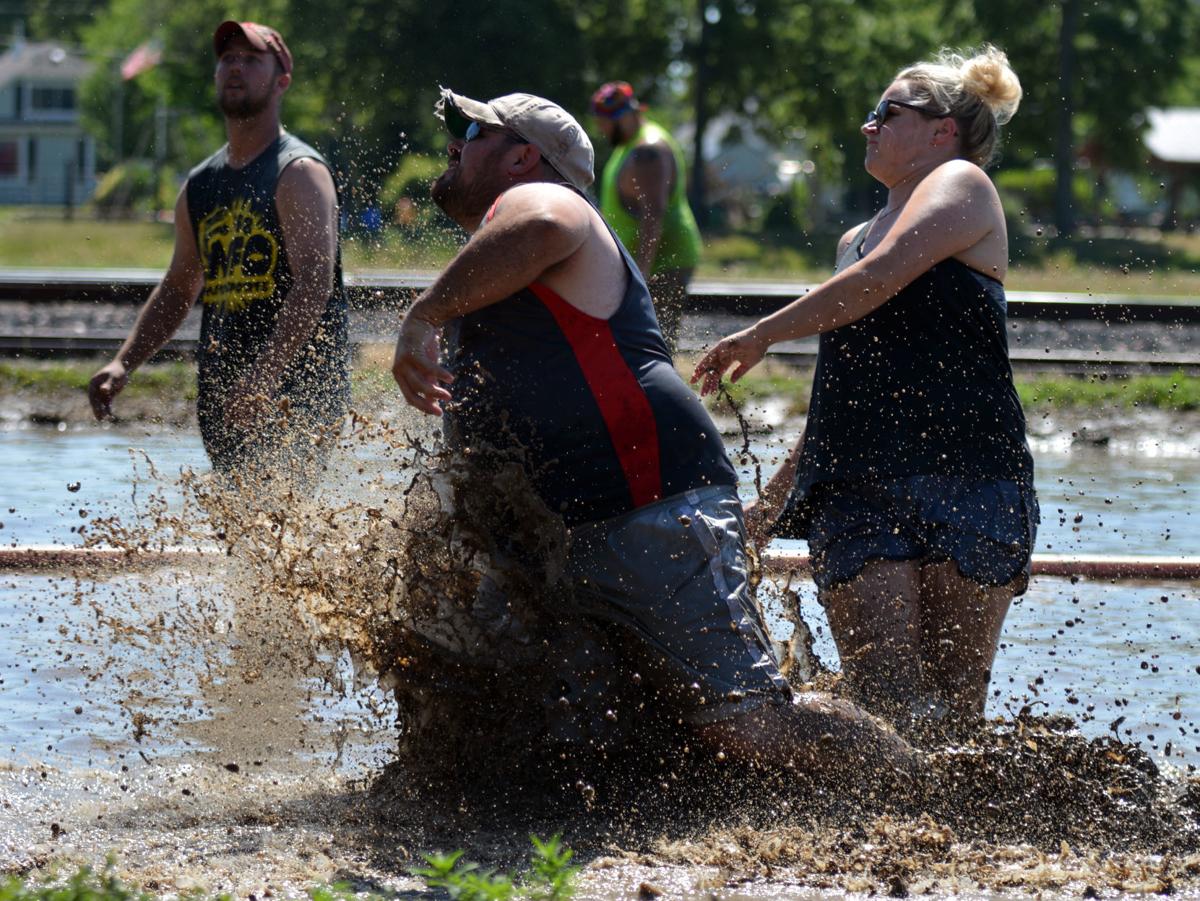 Craig Olsufka, center, splashes water and mud as he plays volleyball during a previously held mud volleyball tournament held as part of the Platte Center Fourth of July Celebration. 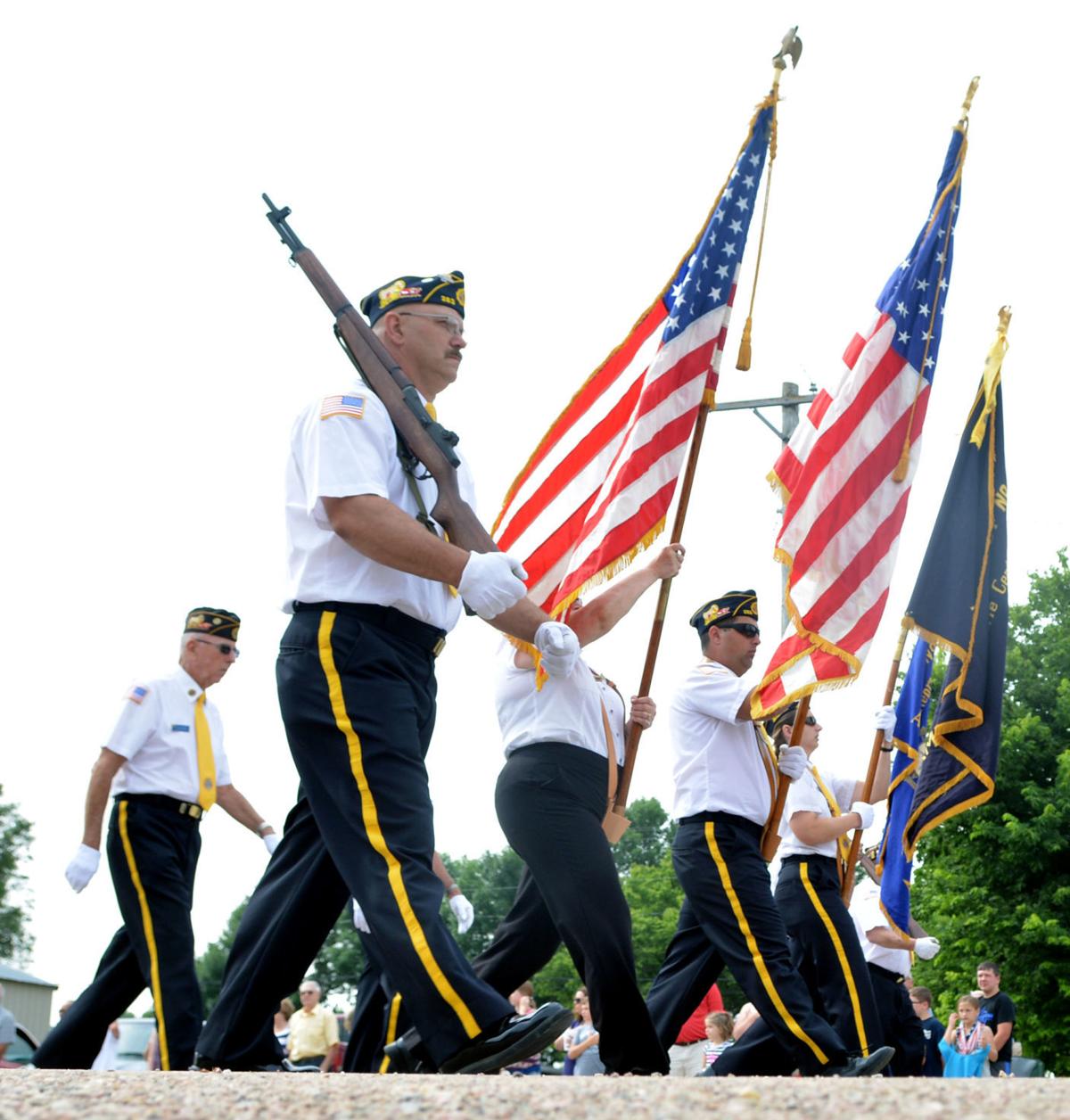 For the better part of two weeks, Justin Arndt and one of his buddies have been making sure the mud volleyball courts in Platte Center are ready for use next weekend.

The volunteer firefighters have been clearing out debris – sticks, leaves and any sharp objects – that have accumulated since last year’s festivities associated with the village’s annual Fourth of July Celebration.

This year’s activities, being held June 28-29 and July 4, once again will allow Platte Center residents and those from surrounding communities to celebrate America in impressive fashion.

Of all the activities associated with this year’s celebration, the mud volleyball tournament is always a fan favorite. Since last year, another mud court has been dug allowing for more team participation, event organizer Kelly Arndt said. So far, 30 teams are signed up to play on Saturday, June 29. She added, though, that up to 34 teams can participate. To register, those interested are encouraged to call Arndt at 402-270-9938.

The village celebration once again offers a little bit of something for nearly everyone. On Friday, June 28, turtle and frog races are being held at 6 p.m. at Elmwood Park. On Saturday, June 19, an 8 a.m. Red, White & Blessed Fun Run is also being kicked off at the park. Those interested in registering can do so at getmeregistered.com/redwhiteandblessed5k.

The turtle and frog races are always a hit with area kids, said Bernie Greisen, one of the Fourth of July Celebration's four coordinators.

“It’s always really well received,” Greisen said. “I recently talked to the heads of those events and they said that they had been receiving calls throughout the year asking if we were having it again this year.”

At 10:30 a.m. on Thursday, July 4, a parade will make its way down Main Street, followed by an 11 a.m. lunch consisting of pulled pork, hot dogs, macaroni salad, baked beans, potato chips, ice cream bars and water and juice. Lunch is priced at $3 for children ages 4-10, $7 for adults and free from those 3 and under.

The celebration will wrap up with a noon kiddie tractor pull and a 2 p.m. demolition derby, which Greisen noted is always a rush.

Another big draw is the parade, which has continued growing throughout the years. Greisen hopes that at least 50 floats will make their way through town for all to enjoy. Those interested in having a float in this year’s parade are encouraged to call Greisen at 402-246-2050 for registration details.

Greisen said that it takes a lot of collaborative work to pull off the multiple-day celebration.

“We basically start in January looking for donations to help with all the costs associated with getting it going,” she said. “We have some awesome supporters – I can’t even believe it.”

This is the 47th year of the village’s celebration, and Greisen said that it serves as one of the highlights of the year for the approximately 330-person town.

“It’s a once-a-year event and it really seems to pull the whole village together,” Greisen said. “It’s just a really beautiful thing where we are all able to pull together to make it happen. We act as a team and work hard to put on a really fun gathering.”

So much is happening in and around Columbus it is hard for me to know where to begin.

Cork & Barrel to open for inside seating

Nicole Saalfeld, owner of the Cork & Barrel bar, didn’t expect to be open for dine-in service by July 1 after her business flooded last we…

Craig Olsufka, center, splashes water and mud as he plays volleyball during a previously held mud volleyball tournament held as part of the Platte Center Fourth of July Celebration.