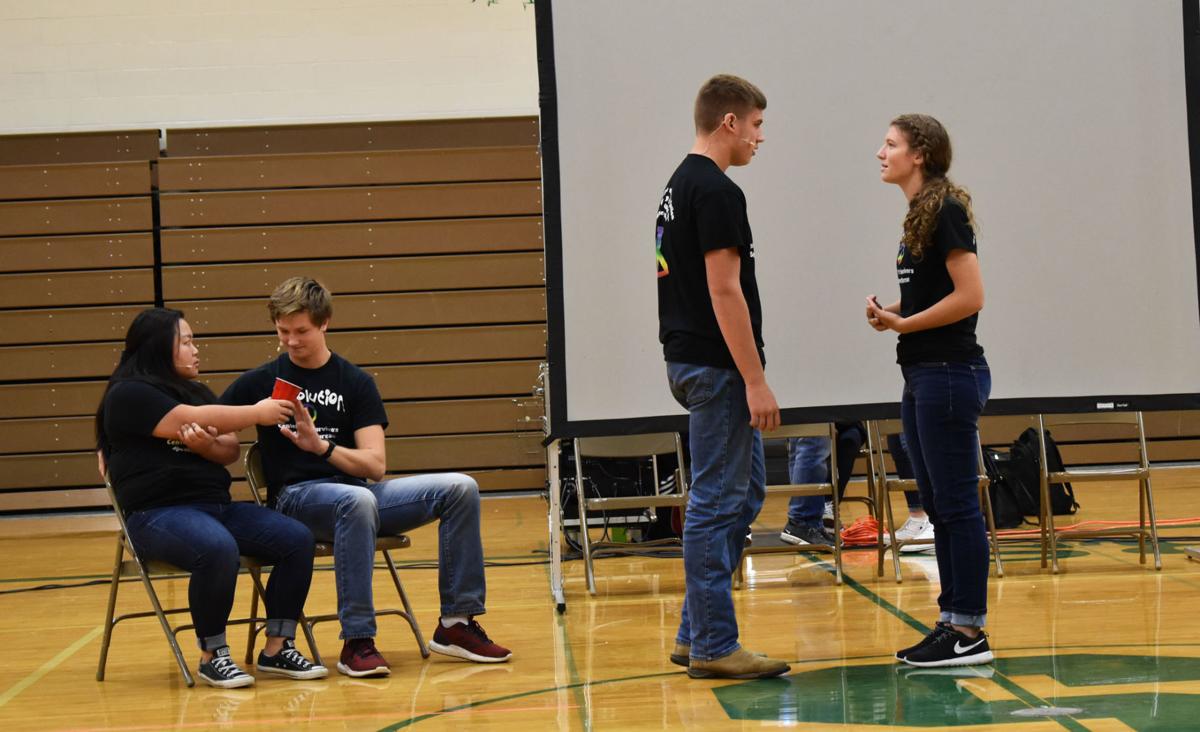 Revolution members perform on Monday at Schuyler Central High School in an effort to educate students about healthy and unhealthy relationship habits. 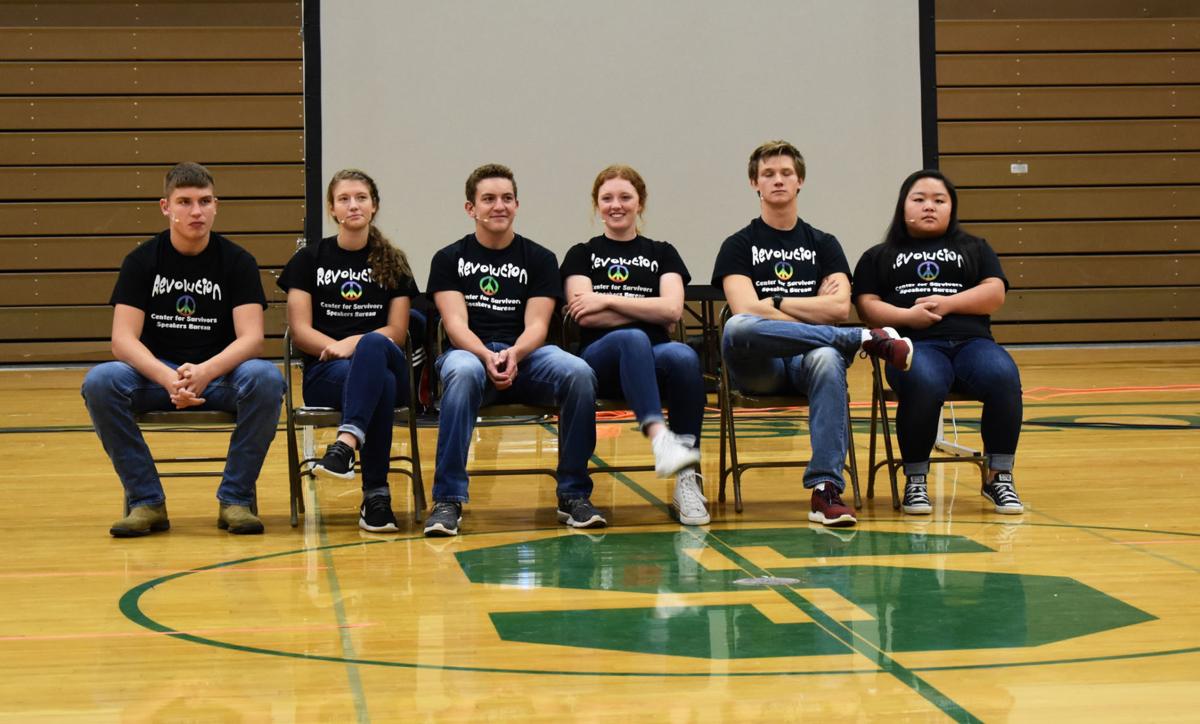 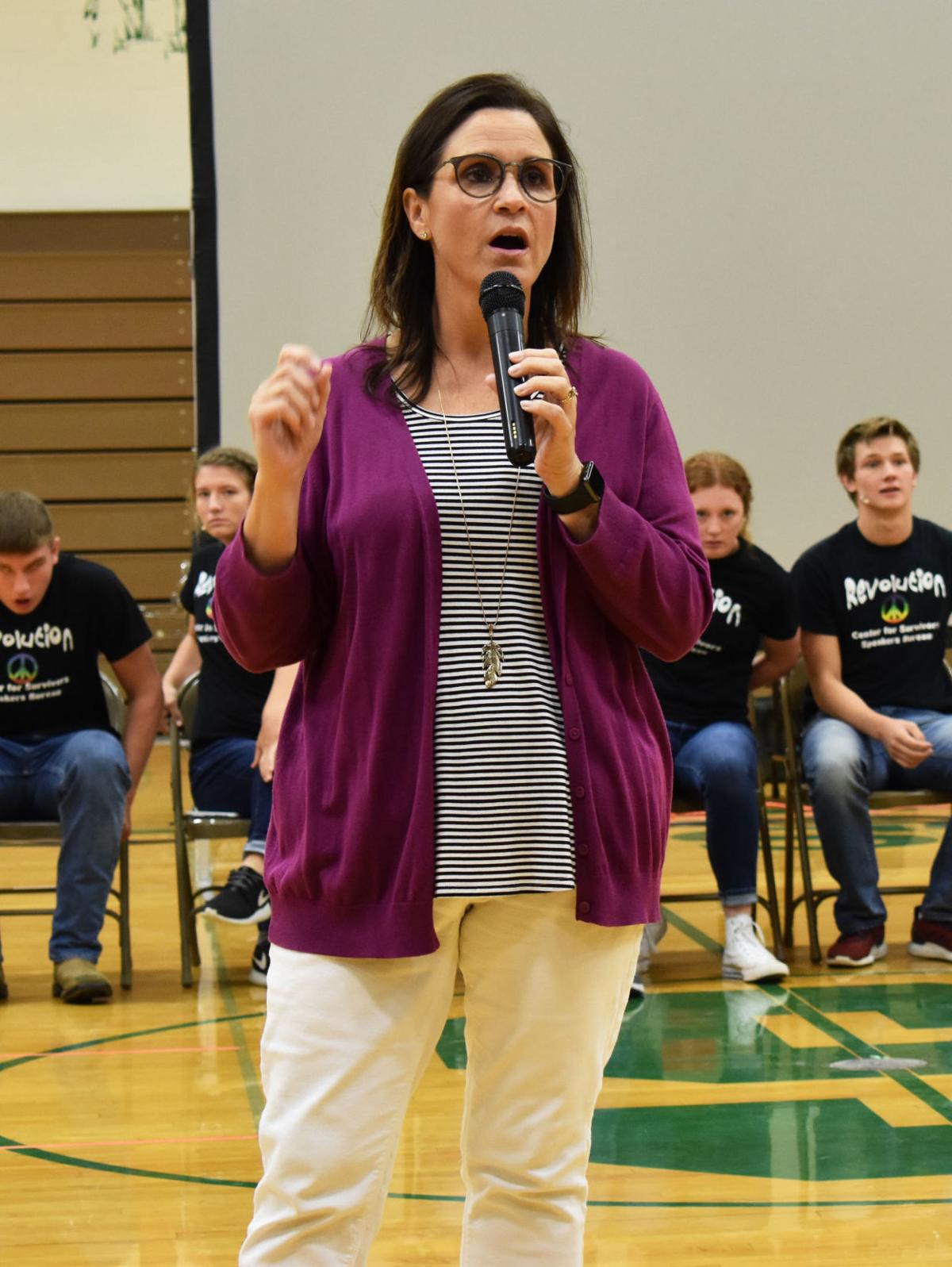 Abbie Tessendorf, services director for the Center for Survivors, introduces the members of Revolution and their presentation on Monday to students at Schuyler Central High School.

After his sister fell victim to an abusive relationship, Columbus High School junior Mac Shevlin made it his mission to increase awareness surrounding dating violence, sexual assault and stalking through what is known as Revolution.

“Everyone thinks the world is such a good place but, really, it has its dark side,” Shevlin said. “It’s not as a good of a place as everyone thinks it is and I think that people need to figure that out so that they can do something about it.”

Revolution, a grant-funded organization consisting of students age 14-20 established in 1998 by the Center for Survivors, aims to inform youth about the dangers of dating violence and sexual assault through peer-to-peer education, according to the organization’s official website.

Officials decided to change the name of the group in 2009 from Speaker’s Bureau to Revolution, which was derived from a song by The Beatles. To be involved, members have to be nominated by their peers, guidance counselors or community members, in addition to showcasing responsibility and leadership qualities.

The group currently has 44 members.

Shevlin, whose two older sisters were past members of Revolution, was nominated during his freshman year.

“I learned that it really is our job to protect the women and to make sure that people aren’t talking bad about them behind their backs,” Shevlin said.

According to the Centers for Disease Control and Prevention, roughly one in nine female teens and one in 13 male teens reported experiencing dating violence.

Abbie Tessendorf, services director for the Center for Survivors, said many people assume dating violence is more prominent among at-risk individuals, but in reality, it can happen to anyone. Tessendorf said one in five high school students said they’ve been hit, punched or kicked while in a relationship.

Tessendorf said the biggest aspect of Revolution is the “You Deserve Better” theater presentation written by members based on their own -- and their peers -- experiences. The presentation is currently being showcased in various schools within Platte, Butler, Polk, Nance, Boone and Colfax counties in hopes of educating students about the difference between healthy and unhealthy relationship habits.

The first component of the presentation is a number revolving around dating violence and sexual assault, followed by a panel where members will answer questions in character. The presentation finishes off with an educational segment where members provide points surrounding their roles and behaviors.

“We need to speak up and do something about it,” Shevlin said. “Rape is real. It does happen to (high school students). A lot of people think that it doesn’t happen at this time in their lives, but it really does.”

Member Emily Van Cleave, senior at Lakeview High School, said she has heard of cases involving dating violence, sexual assault and stalking happening among her peers. Van Cleave said she knew how to console victims but didn’t know how to help them by referring them to the right resources before joining the group.

“I like the idea behind helping people, especially people my age that I knew these things were happening to,” she said.

Natasya Ong is a reporter for The Columbus Telegram. Reach her via email at natasya.ong@lee.net.

Revolution members perform on Monday at Schuyler Central High School in an effort to educate students about healthy and unhealthy relationship habits.

Abbie Tessendorf, services director for the Center for Survivors, introduces the members of Revolution and their presentation on Monday to students at Schuyler Central High School.