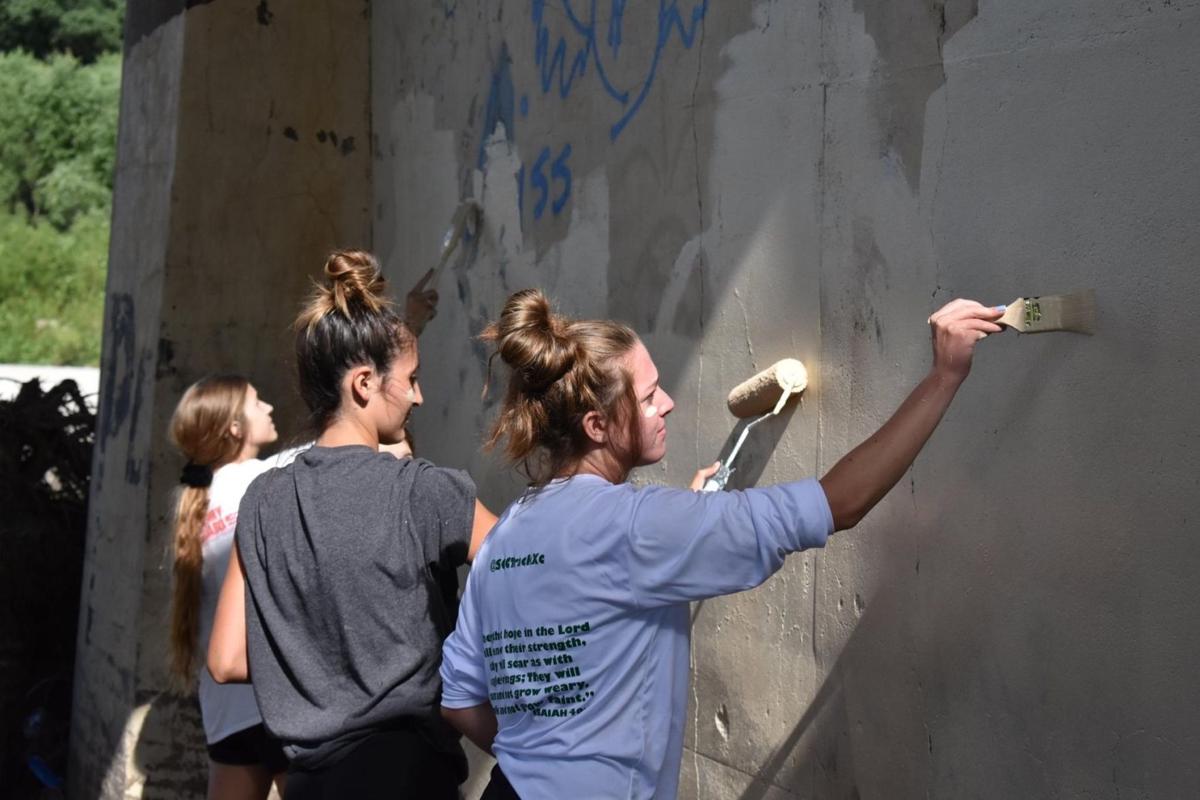 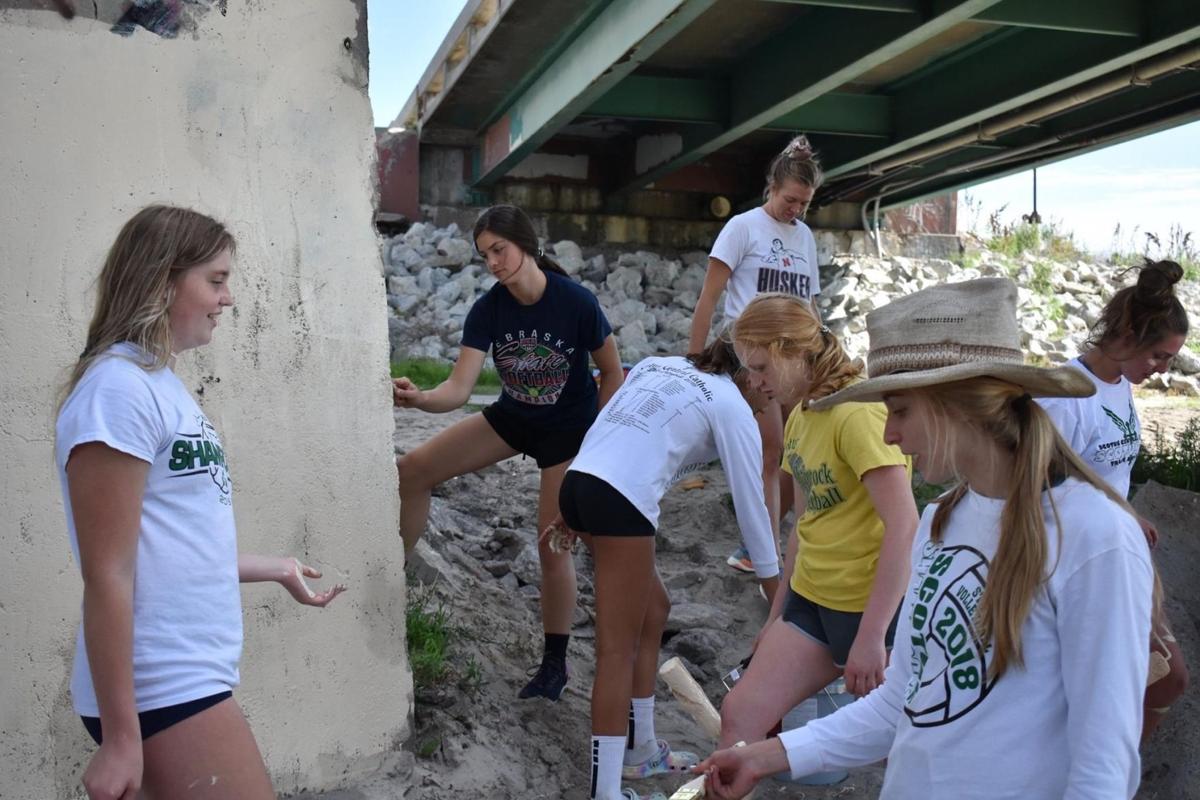 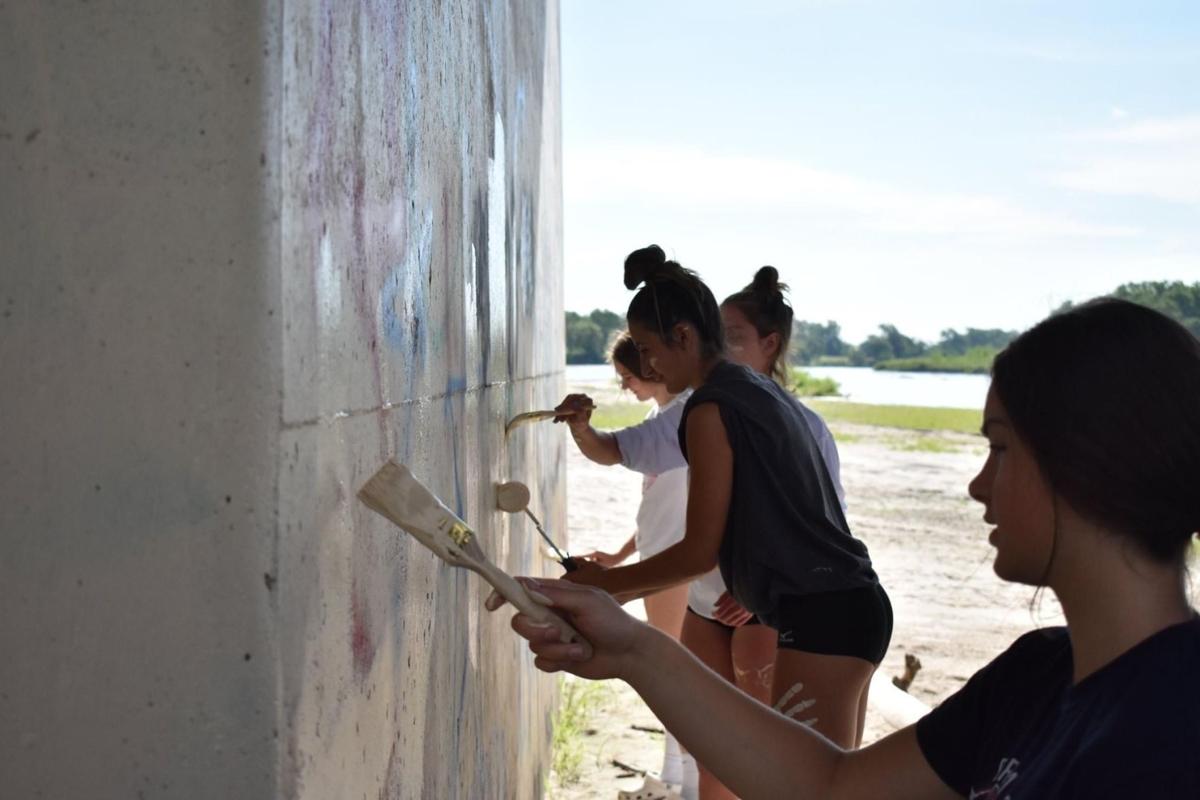 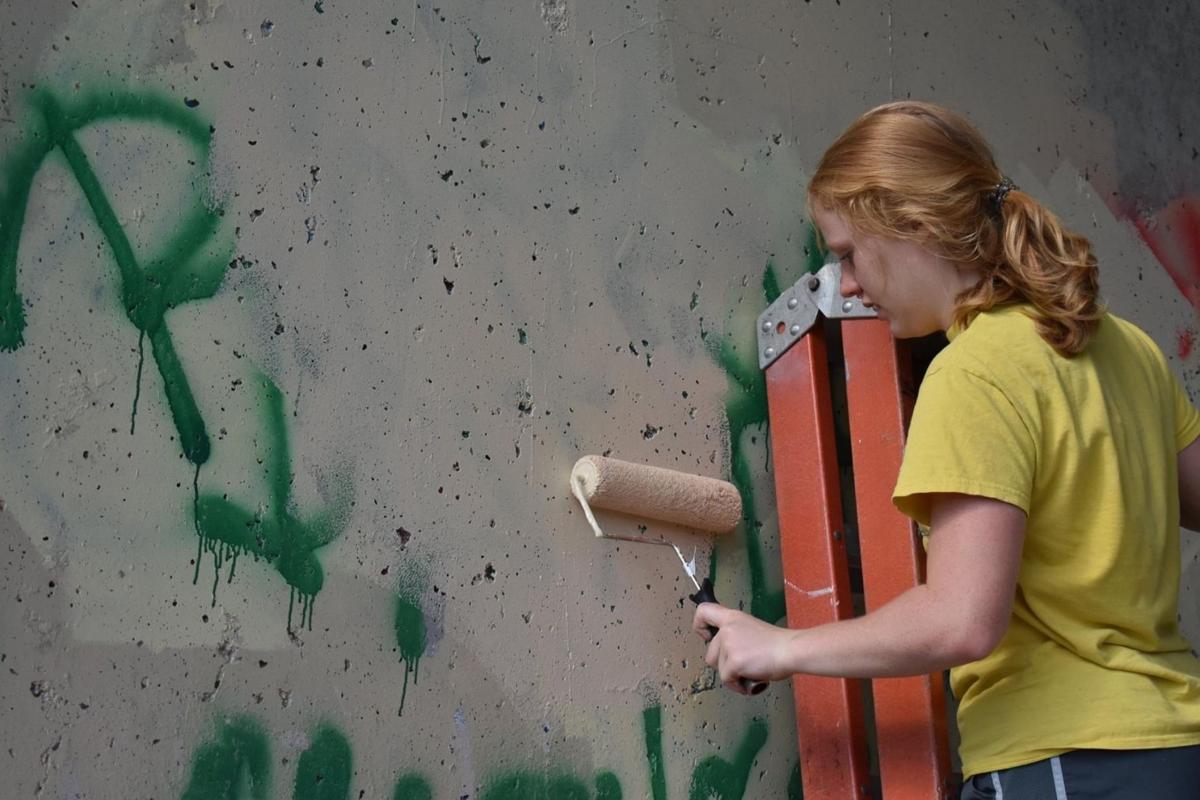 Members of the Scotus Central Catholic High School volleyball team on Wednesday painted over graffiti underneath the overpass located near Pawnee Park and Platte River.

For Chloe Walker, a junior on the team, it was a nice chance to participate in team bonding during a summer where they haven’t been able to spend much time together.

“Our coaches have to wear masks and we’ve really tried to stay 6 feet apart. After practices and stuff it’s been hard too since we don’t want to risk anything,” Walker said. “All our coaches were there and most of our girls were there so it was very fun hanging out with the whole team and doing something for Columbus.”

They have also had open gyms and have gone to a few camps.

“It’s very good that we actually got to do stuff this summer,” Walker said.

Walker said she loves her hometown of Columbus. At Scotus, students are required to have 20 hours of community service in four different categories: Church, school, community and family and friends.

While teammates were painting, they saw some art they wanted to leave up.

“There was some angel wings we really wanted to keep because a lot of people take pictures down there,” Walker said. “We did paint it over just because we wanted to follow what the City said and paint over everything.”

Head coach Janet Tooley said some of the artwork was good but they thought it was best to completely clear everything that was there. They left the angel for last.

“It’s kind of been always there in Pawnee Park. It's unfortunate that some of the things that are written are not kind (or) very positive,” Tooley said. “Yet at the same point, some of the artwork is pretty interesting and actually pretty talented, but probably there are better places to do that other than on City property.”

Some of the other artwork that was actually pretty attractive, she noted.

“As the City said, unfortunately, it’s just a clean canvas and at some point, it will be needed to be covered up again,” she said. “It just would be nice if it would be positive things rather than the negative that sometimes shows up in graffiti.”

For Tooley, this is one of the things she really wanted to incorporate into the program.

“I’ve been back as the head coach now -- this is my fourth season -- and as things have kind of settled in, I thought this would be a good way to promote giving, and the positive benefits of working as a group, benefits to others that maybe aren’t directly about ourselves,” Tooley said. “I think it’s just good for student-athletes to have that opportunity to work for those sorts of causes.”

Tooley said the City provided the paint and the supplies. Doug Moore, public property director for the City of Columbus, reached out to Scotus to see if anybody would be interested in a community service project. She said 17 or 18 students were able to participate.

Tooley and assistant coaches Bree Ackermann and Alex Meyer were also there.

The sun was shining, it wasn’t too hot and the water was low when they went out, Tooley noted, so they were able to go about halfway under the bridge.

“When we finished, the girls said, ‘Coach, let’s do this every year. This was a great time,'" Tooley said.

Walker noted that it was a beautiful day and being under the shade was good.

“We’re a pretty tight team so we were just enjoying being together. It was a fun environment to be in,” Walker said.

The Nebraska Airboaters Association’s airboating event held in Columbus over the weekend saw an estimated 165 boats on the Platte and Loup Rivers.

Time for Change hosts Back to School Bash