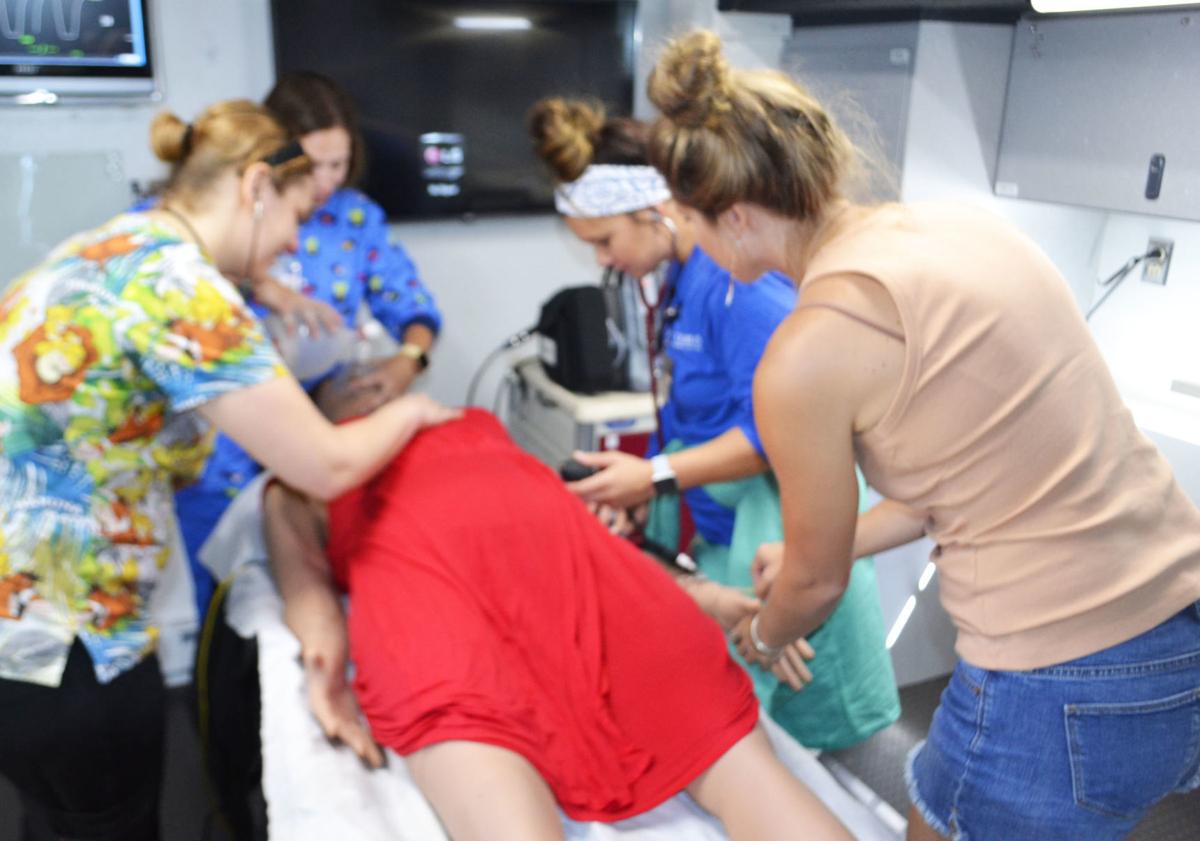 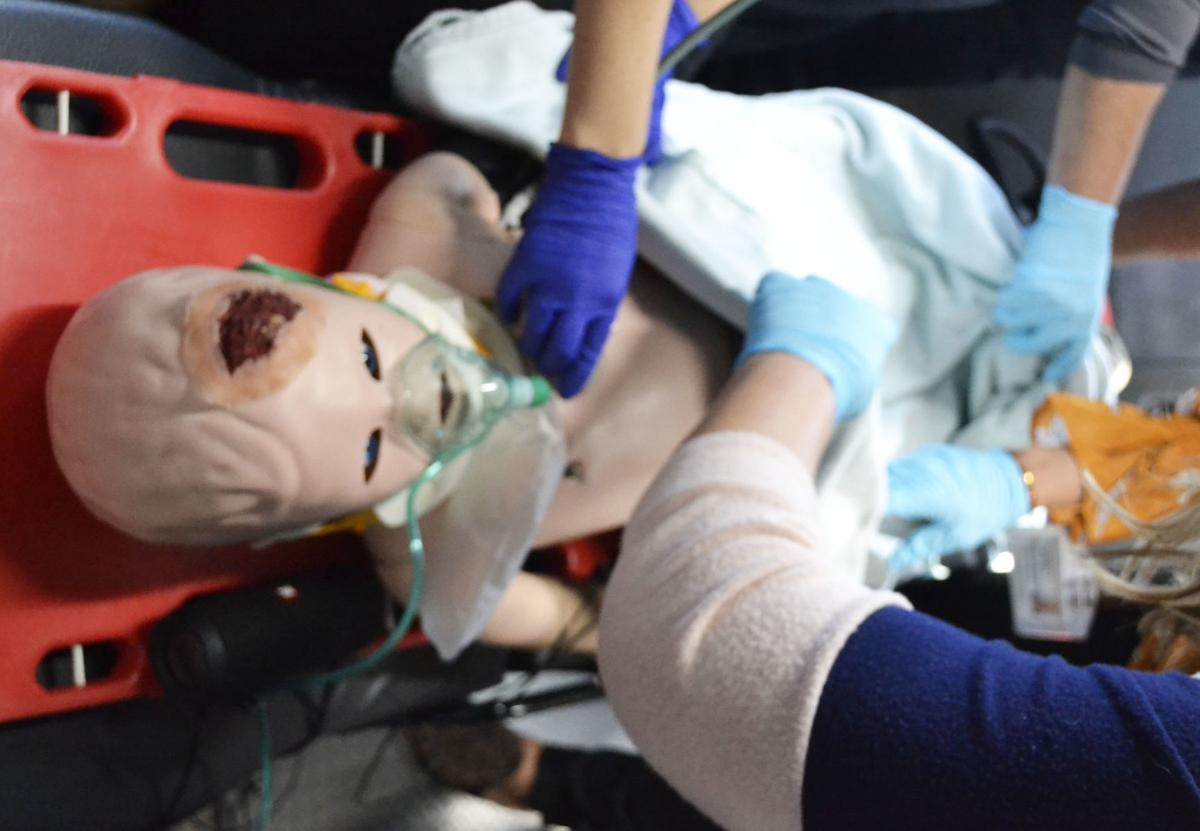 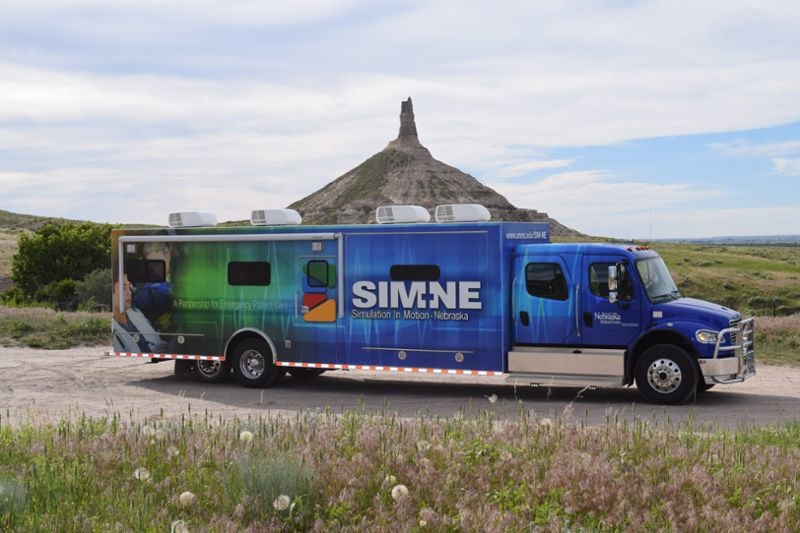 A look at the SIM-NE truck as it travels near Chimney Rock.

Since being launched by the University of Nebraska Medical Center in 2016, the Simulation in Motion Nebraska (SIM-NE) truck has been making pit stops at various hospitals and health care providers all throughout rural Nebraska.

So far, it’s made the trek to 91 of the state’s 93 counties, and the goal is for the last two to be checked off by year’s end, according to Lead Simulation in Motion trainer C.J. Prewitt. The truck has previously made a stop in Platte County when it visited Humphrey, and made its second-ever appearance Thursday when it spent eight hours parked at Columbus Community Hospital.

The SIM-NE truck is a mobile education system that brings medial training opportunities to health care providers across the state. SIM-NE offers mobile simulation labs that are housed in 44-foot trucks that travel to communities to provide state-of-the-art, hands-on training.

The simulation truck offers an emergency room simulation and an ambulance module simulation. It also has patient simulators, including simulators of adults, children, infants, pregnant mothers and newborns. These technologically advanced patient simulators are capable of talking, breathing and bleeding, and their conditions change according to the treatment they receive.

In total, Prewitt said that the truck and necessary training equipment loaded on board come at a pretty sizable expense, typically around $1.4 million per truck. Currently, there are SIM-NE trucks based out of Norfolk, Lincoln, Kearney and Scottsbluff. Funding for the truck and equipment is made possible through a partnership of educational institutions, academic departments, charitable organizations and public agencies, according to provided information.

During the afternoon, 17 CCH staff members had the opportunity to climb aboard and work with one or more of the four, high-tech dummies on the truck relating to stroke response and pediatric trauma. Later in the day, area emergency medical service (EMS) personnel were able to complete training tailor made to the situations they encounter.

Sam Lozos, trauma program manager/stroke coordinator at the hospital, said that the simulator provides a great outlet in addition to the SIM lab established at the Columbus facility in 2012. At the time, CCH was one of about 10 percent of hospitals nationally that offered this sort of in-house training.

“It’s a benefit because I feel like we only get better if we are repetitive with what we do,” Lozos said. “We do see a lot of stroke patients, but we did a pediatric trauma simulation – which fortunately in our community we don’t see a lot of pediatric trauma. So it’s nice to be able to go through a scenario and see what we need to do to improve that to make our pediatric care with trauma just that much better.”

CCH participants on Thursday used real medical and rescue equipment, just like they would use in the field or in a clinical setting, to offer the patient simulators treatment. Each simulation was captured on recording equipment in the simulation truck, so after the completion of the scenario, participants were able to review their performance. Prewitt and SIM Trainer Adele Anderson – both of whom are certified paramedics – led the training sessions.

While those honing their skills were certainly learning, one of the huge pros of the simulation experience is that it has a different vibe that just hearing about protocol and response, rather than putting those principles into direct action.

“We are trying to get away from that training of, they don’t really put their hands on the patients when they do training, and they kind of look up to the trainer and ask, ‘what’s my vitals,’ and, ‘what’s my patient present like.’ Now, we have an opportunity that gives them real training that’s based off of a real patient.”

Anderson added that simulation practice forces those in training to really think on their feet; on the fly just like they have been, or inevitably will be forced to be at one point or another in the future.

“What makes it great is that it’s in real time,” Anderson said. “Because when you role play and you just have people pretending that they’re hurt, everything just goes by (mentally) in like five minutes. But here, they have to deal with it, they are waiting for the computer to change the mannequin to react to the interventions they did. It lengthens it out so that it is real time.”

Perhaps most importantly, Lozos said it provides hands-on training where it’s OK to fail sometimes. Making a mistake while learning is alright, it’s all about fixing that so when it’s time to make real-life decisions, the proper ones are reached.

“Everyone said that it’s highly beneficial, Lozos said of the SIM-NE truck experience. “Because a lot of them said, ‘It’s nice to know that I am not going to cause any harm.’ This is an opportunity for, ‘if I make a mistake I can learn from it, and then I will always remember what I need to do when it happens again, or this arises … If you make a mistake, now is the time, and that’s what I think is so great about simulation in general …”

A look at the SIM-NE truck as it travels near Chimney Rock.