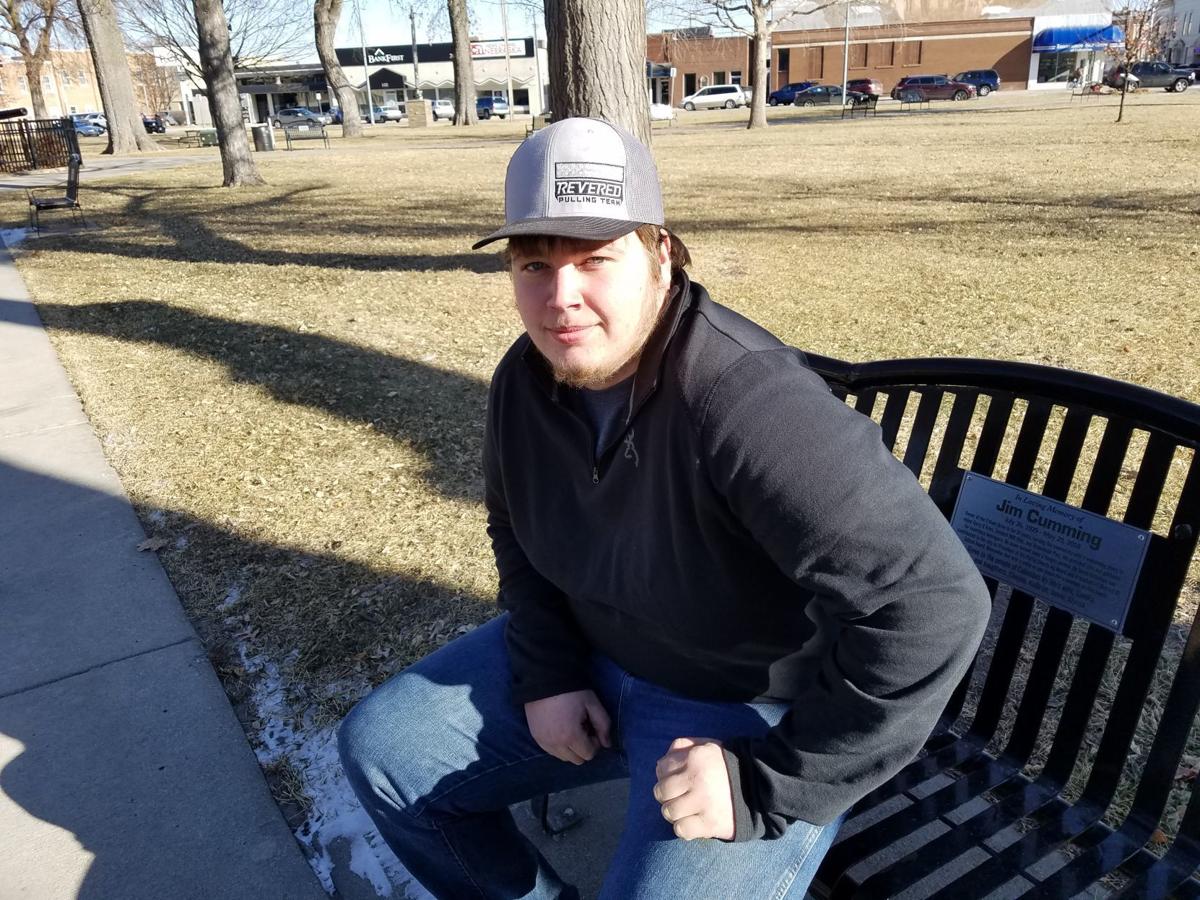 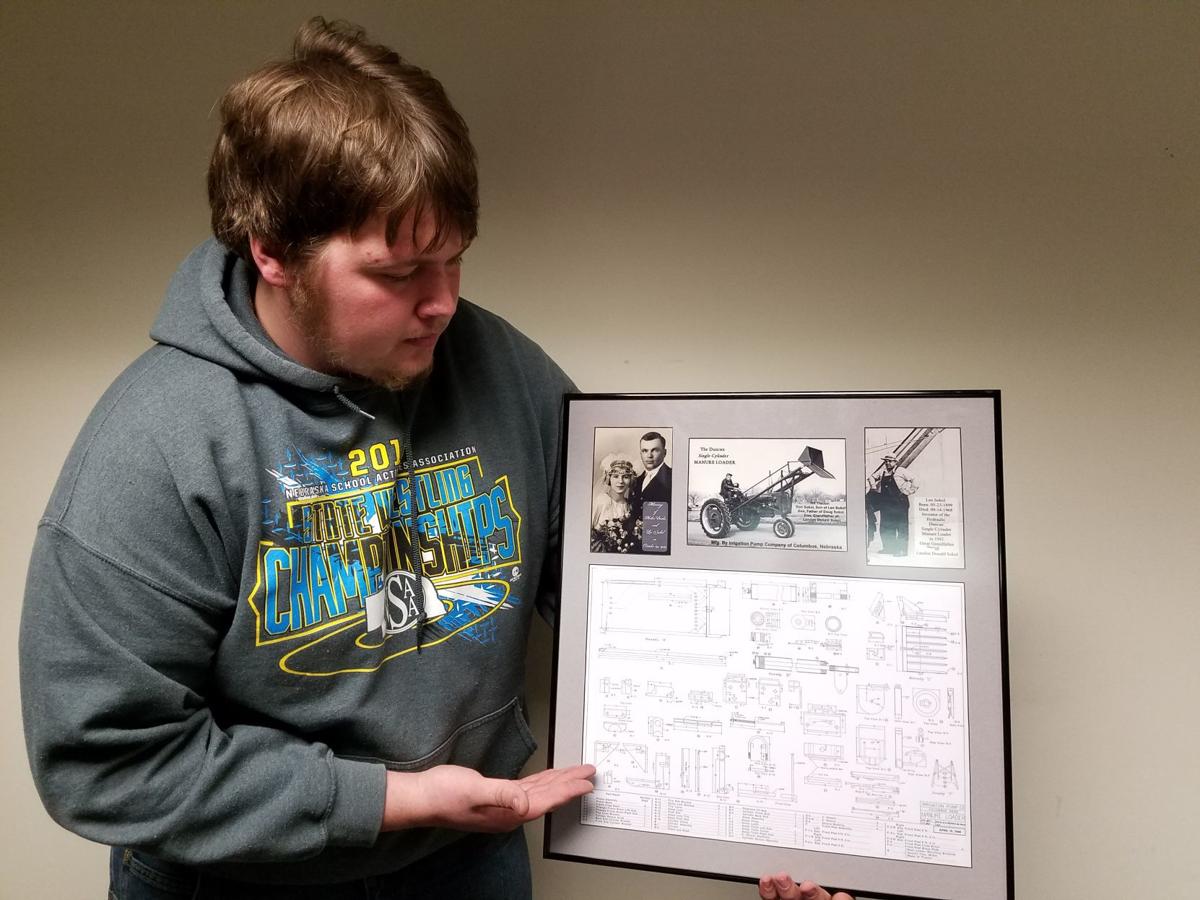 Landon Sokol shows off a gift he received from family: A framed copy of a 1946 blueprint of his grandfather and great-grandfather's Duncan single cylinder manure loader and several photos of his late relatives.

Landon Sokol shows off a gift he received from family: A framed copy of a 1946 blueprint of his grandfather and great-grandfather's Duncan single cylinder manure loader and several photos of his late relatives.

Editor's note: In honor of the new year, The Columbus Telegram is publishing a new two-week series, "20/20." We first profiled five older Columbus residents and now have transitioned to residents in their 20s. See previously published stories at ColumbusTelegram.com.

Columbus native Landon Sokol’s fascination with agriculture is no surprise to anyone who knows him – it’s literally in his blood.

Sokol, a 2018 graduate of Scotus Central Catholic, is the grandson of the late Don Sokol and great-grandson of the late Leo Sokol, the men who founded Columbus’ own Irrigation Pump Company many decades ago. He didn’t know them personally; however, one of his most prized possessions is a framed 1946 blueprint of one of their Duncan single-cylinder manure loaders.

The framed item also features some photos of his late relatives. Irrigation Pump was well known for manufacturing its original Duncan Lifetime Spinner, considered to be a top-notch spinner, among many other things.

“I’m still fascinated by what they did,” Sokol said of his grandfather and great-grandfather. “It’s just neat to see where great-grandpa Leo and grandpa Don came from. I look at (the blueprint and photos) and think, ‘yeah, I could be doing this at one point in my life.’”

Sokol was born and raised in the city limits of Columbus, attending St. Anthony’s and later Scotus throughout his youth. Despite where he lived, the great outdoors and agriculture were a big part of his life. He was a football player and did wrestling and track while in high school, but when he wasn’t competing or in the classroom, he spent significant time hunting and fishing.

He also had plenty of opportunities to help some of his dad’s farming friends in nearby spots like Duncan, particularly when he was in high school.

“Growing up, my dad had friends who had farms. I was always happy to do something ag-related,” he said. “I always would welcome the chance to come and help them during the summer. I liked helping out during the fall harvest. I would help my dad’s friend in Duncan get the equipment ready and make sure he was squared away for harvest. I would be there in a moment’s notice.”

When it came time to make a decision regarding his future after graduating high school in May 2018, Sokol admittedly thought seriously about automotive engineering. But his heart told him agriculture-engineering was his path.

“Being in the ag-field, I just felt at home,” he said.

Sokol, 20, is a sophomore pursuing an associate degree at Central Community College-Columbus, a place he said has provided him a lot of opportunities to grow and learn. There, he’s also a member of Project GPS, also known as Growing Pathways to STEM (Science, Technology, Engineering and Mathematics). Project GPS is a scholarship-awarding program sponsored by the National Science Foundation that targets high-achieving students with financial needs and who represent underserved populations in the STEM fields.

Gillespie said Sokol has vastly matured throughout the program since he became a part of it, calling him a high-achiever and a quiet leader.

“I think he will be successful in whatever avenue he applies himself in,” she said. “He’s a very intelligent man and very talented …”

For his part, Sokol said he has enjoyed his time at CCC-Columbus and praised his professors and mentors for helping him along the way. He plans to transfer to the University of Nebraska-Lincoln to continue his major in ag engineering. He said he feels like a lot of people overlook opportunities in the manufacturing industry, but that he’s hoping to make a career in it.

“My ideal spot would be on the outskirts of Columbus. Columbus is a great town but just having that out-of-town experience, and we have all of the manufacturing places here,” he said, noting Behlen Mfg. Co.,Camaco and Becton Dickinson, among others. “Some of my hobbies are working on older tractors. It’s just great to deconstruct something, see how it was produced and everything else. I just love the construction of all sorts of stuff, so manufacturing makes sense.”

His advice for young people is simple: Don’t give up.

“When you’re going through hard times, different trials and tribulations stay strong through those and everything will turn out all right,” he assured.

20/20: Allison Brockhaus making most of life in Columbus

Editor's note: In honor of the new year, The Columbus Telegram is publishing a new two-week series, "20/20." We first profiled five older Colu…