LINCOLN — The World War II collector lives in a nursing home now, so he has room for just a few items.

He once filled the former Happy Chef restaurant at the Greenwood I-80 exit with thousands of pieces of military history, keeping his museum's doors open for more than a decade. He used to travel the state speaking at schools and gatherings, ultimately telling tens of thousands of people about the war he helped fight, while wearing the uniform he helped fight it in.

“There’s a big fight in Washington,” he says, reaching for the remote to silence the voices filling his small room near Holmes Lake.

Meehan ushers his wheelchair to a bureau and pulls open the top drawer.

His hands are slow but steady.

He begins: “Have you ever seen one of these?”

He'll hand over a pocket Bible with an inscription to the troops from President Franklin Delano Roosevelt and, in case the word of the Lord couldn't stop a bullet, an armor-plated front cover.

“They only gave them to combat men,” he said. “That's why they're so rare.”

He'll hand over photos from his younger days and a military medal and a deck of trick cards he won at the 1940 State Fair. He'll perform a trick — showing the ace of spades at the bottom of the deck, then in the middle, and then at the top.

He used to be able to do more, he says, but he's forgotten.

He'll hand over a business card, though he'll warn it's no longer good.

“Wanted Anything From World W.W. II.”

He'll also hand over an auction flier. Starting Sunday in Waverly, most of the last of Meehan’s collection — once big enough to fill his museum, and then three outbuildings in north Lincoln — will go to the highest bidders.

His collection started slowly, and sparsely, in 1944.

Another soldier had recovered a pair of rising sun flags from a Japanese fighter that went down during the Pearl Harbor attack. Meehan inherited them when that soldier was going home.

And that was about it for the next 30 years. He returned from the service, opened a car lot, took a postal job.

But in the late 1970s, he started giving presentations on the war. He also started scouring the city — and then the country — for any piece of war memorabilia he could find, once hitting 84 garage sales in one day.

He ended up with five Jeeps. A 900-pound dog tag machine. Hundreds of uniforms and guns and helmets and knives and thousands of books. Patches and pins, boots and blankets. He was filling garages and outbuildings.

“I was getting about everything I wanted,” he said.

In 2003, Meehan and his longtime companion, Rose McCown, turned his obsession into a museum, filling a former restaurant on the interstate between Lincoln and Omaha.

Meehan kept a blackboard there, inviting guests to write down where they were from.

They closed in 2012, citing the long hours required to run the museum — they lived in a motor home next door — and steep electric bills and a thief that kept targeting them and a leaky roof and the never-ending construction from the widening of the interstate.

“If Joe was still healthy, he’d still be there operating,” said Randy Fleming, a longtime friend and auctioneer.

The last few years, he was shipping pieces all over the country, he said.

He gave them away, too. The Nebraska National Guard Museum in Seward filled in some of the blanks in its exhibits with smaller items from Meehan’s collection — like canteen covers and patches and a mine detector.

Most of it will sell Sunday, Monday and Tuesday, Fleming said. But the collection is so big there could be a second auction.

From his room at Holmes Lake Manor, Meehan isn’t sad to see it go. He’s never going to leave this place, he says, so all that stuff isn’t doing him any good.

Plus, he needs the money for his next project.

The man who spent his life collecting is focused now on giving.

He’s started giving scholarships to seniors at Lincoln Northeast, where he could have been a member of its second graduating class, in 1943.

“But I didn't like school, and school didn't like me, so I just quit.” He found a job setting bowling pins for a few dollars a week before he was drafted.

He wants his money to reward students who are trying the hardest, not just achieving the highest.

The World War II vet turns to his drawer again, and pulls out 8-by-10 photos of scholarship winners posing with him. Some of them liked to hear about the war, he says.

He also donates to the Masonic-Eastern Star Home for Children in Fremont, the Shriners hospitals, Disabled American Vets, American Legion, an orphanage in California.

“His long-term plan is very philanthropic,” Fleming said. “He’ll give it away. That’s his whole purpose.”

Meehan has run out of items to share. He closes his drawer.

He hopes the sale goes well; he wants to make enough so he can continue to give, even after he’s gone.

But he doesn’t plan on going to the sale, to watch the last of his collection scatter. 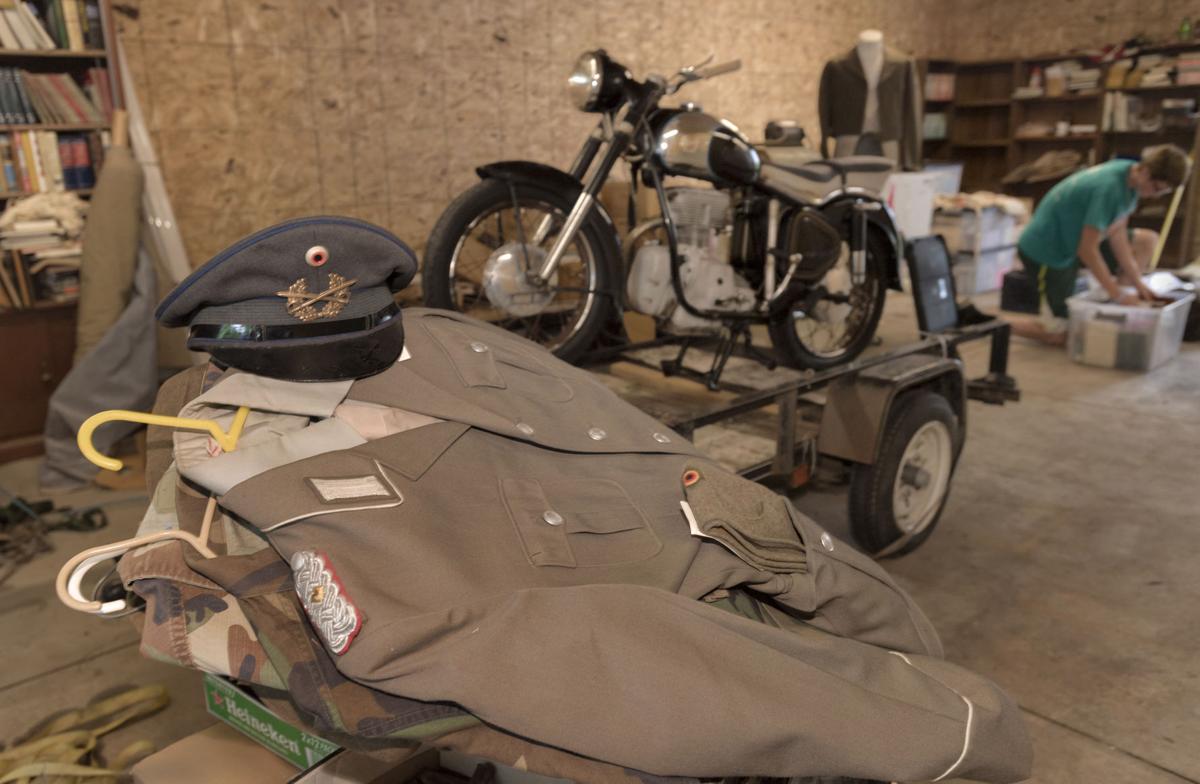 German and U.S. military uniforms and a 1958 Simson Sport 250 motorcycle are among the 1,000 or so items up for auction from Joe Meehan's military collection. 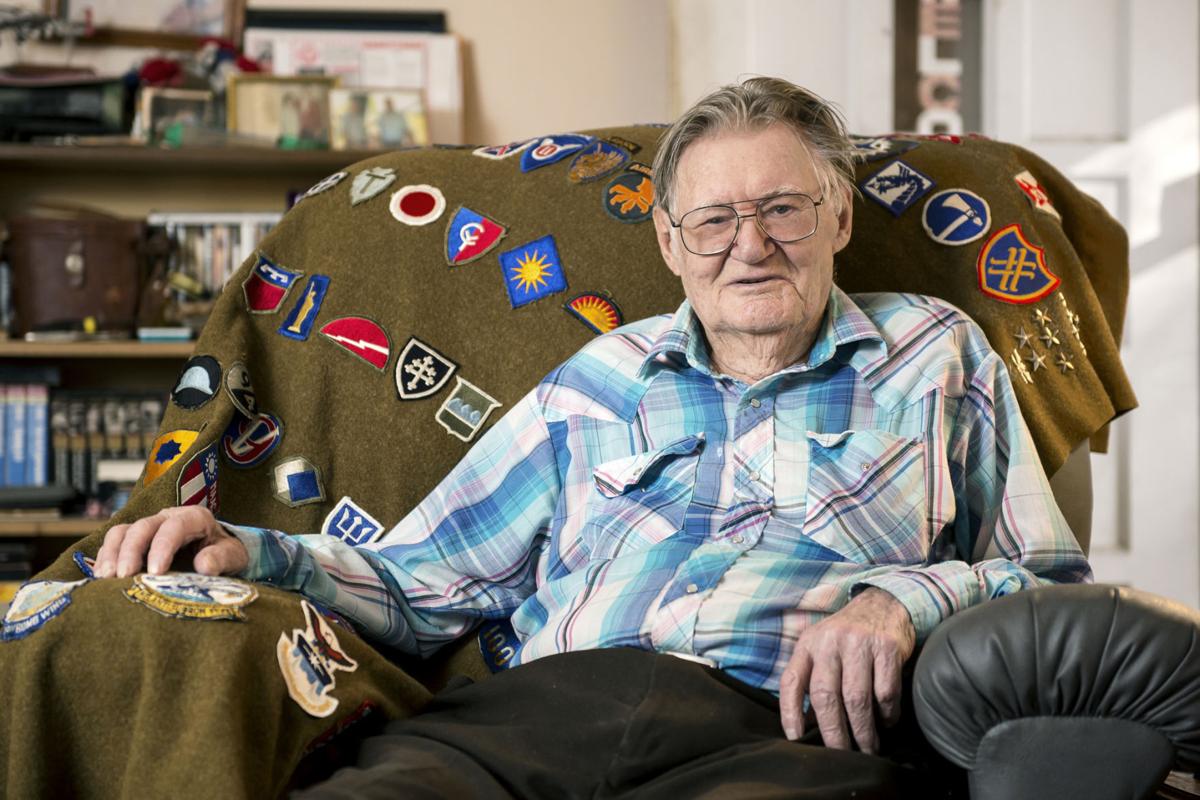