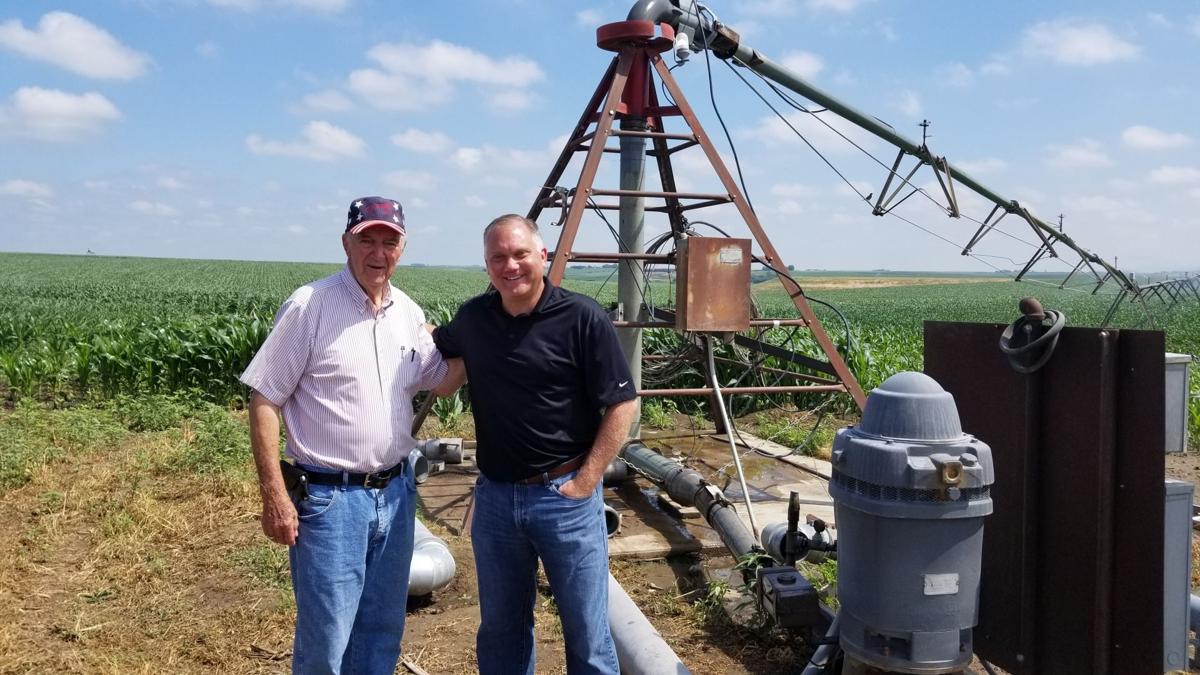 Jim Beller, left, and Jason Parker, right, stand in front of Pivot #5, which is being retired after 51 years. 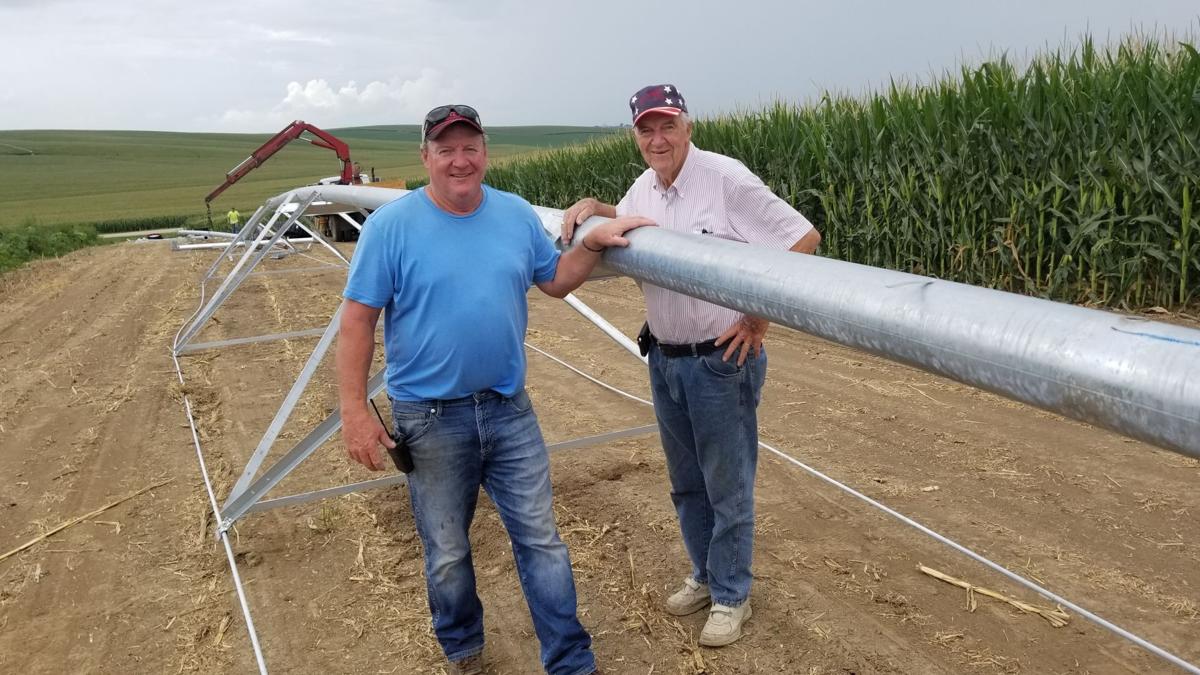 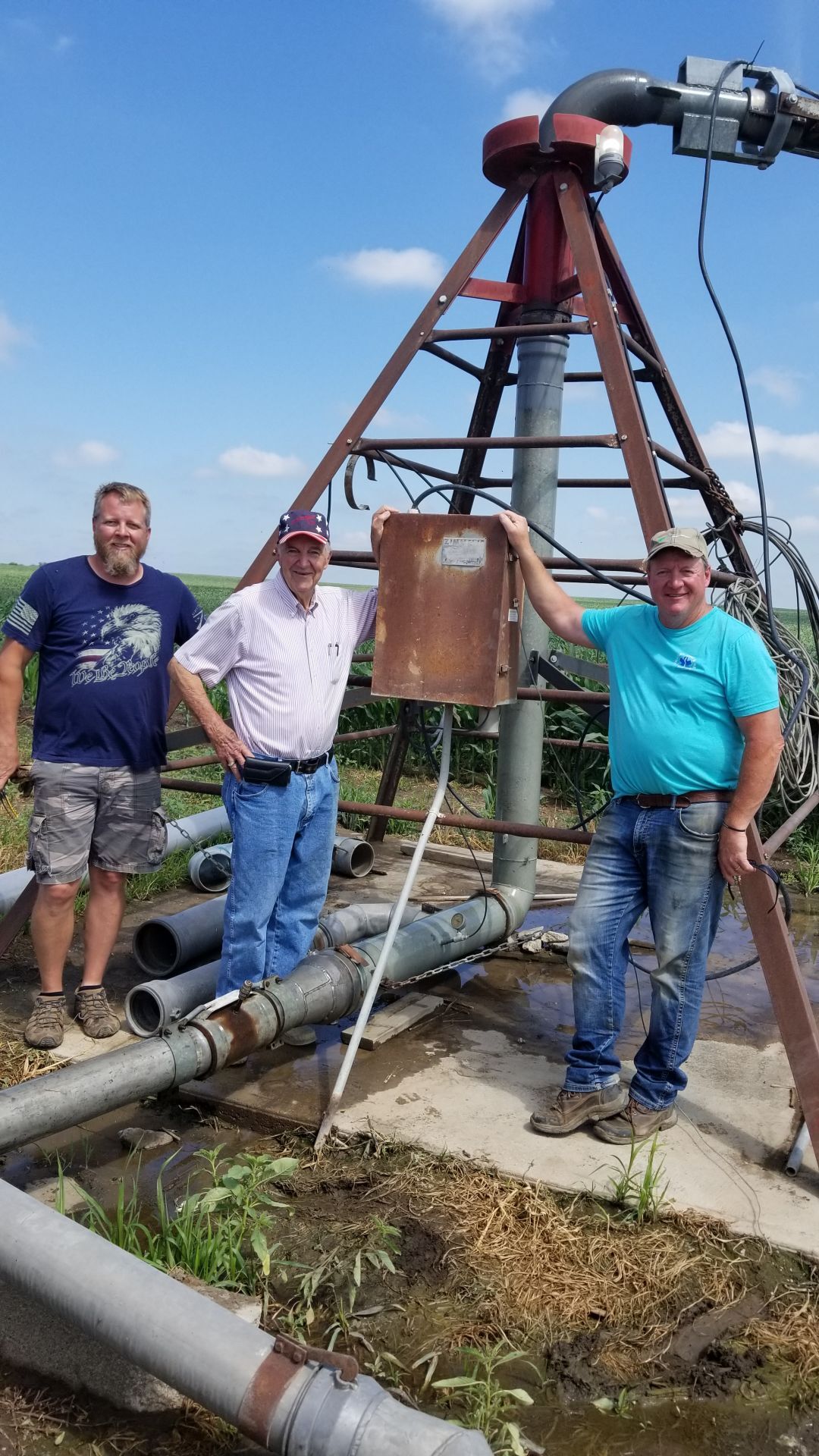 Mike Beller, left, Jim Beller and Terry Beller stand in front of Pivot #5 which is going into retirement after 51 years of service.

The Lindsay Corporation’s Zimmatic Pivot #5 has been in action for over 51 years and now it’s time for a change.

“There aren’t many pieces of farm equipment that will last over 50 years,” Lindsay Corporation Sales Director Jason Parker said.

The Pivot #5 was one of the first Zimmatic center pivot irrigation systems produced by the Lindsay Corporation. The Zimmatic brand is named after its creator, Paul Zimmerer.

Zimmerer founded the Lindsay Corporation in Lindsay in the 1950s. Although the company is now headquartered in Omaha, there is still a plant in Lindsay located at 214 E 2nd St.

When Zimmerer and his sons – Art and Bernie – sold Pivot #5 to Lindsay cattle and corn farmers Jim and Mary Beller in August 1969, they didn’t know if it would work.

“The three of them basically sold this on a handshake agreement with Jim Beller,” Parker said.

The deal was that if the pivot broke down, the Zimmerers would fix it or take it back, free of charge. The Lindsay Corporation has kept the Pivot #5 running on that handshake deal for 51 years.

“A lot of things were wearing out on it. Lindsay has been very supportive in that, since day one, they promised to keep that thing going, and they have,” Jim’s son, Terry Beller, said.

The Pivot #5 isn’t out of commission yet, though. Terry said the Bellers have moved it to a corner field, where it will be irrigating 10 acres, rather than the 115 acres it once covered. A newer, comparable Zimmatic model has taken its place.

At the time it was made, the Pivot #5 was an innovation. Its assembly allowed it to handle uneven ground. Parker said many of the basic innovations and technology developed by Zimmatic in those early years are still used in its products today. But, Parker said, it will be exciting to see the new pivot at work.

It does, after all, have 50 years of innovative improvements behind it and can be operated from Terry’s smartphone.

“It was just time for an update. Now the technology we can operate this new pivot from our phone and we can adjust the variable rate as far as much water to put on. Fifty-one years of improvements in technology is why we decided to semi-retire the old one and put up a new one,” Terry said.

Lindsay Corporation’s biggest market is in the United States, but its products can be found in more than 90 countries, including Australia, Brazil, Argentina and areas of the Middle East. Parker said prospective customers have visited the Pivot #5 for decades to get a sense of what Zimmatic products can do.

“When we take groups out there we can tell them it has been operating for more than 50 years,” Parker said. “That gives them some peace of mind that when they purchase a Zimmatic center pivot, it’s going to last a long time.”

Passersby can also see the center pivot handle the rough ground around Lindsay and know that Zimmatic pivots will work reliably for them, Parker said.

“We enjoy it when they send tour groups out because they like to come out and see the old #5 plus the feedlot operation. We’ve always enjoyed doing that and I think it’ll be kind of a kick to bring those tour groups out now, show them our feedlot, the old #5 and now a new state-of-the-art machine,” Terry said.

Jack Frost returned to Columbus on Monday to nip at the noses of residents and cause a standstill with a winter storm.

Jim Beller, left, and Jason Parker, right, stand in front of Pivot #5, which is being retired after 51 years.

Mike Beller, left, Jim Beller and Terry Beller stand in front of Pivot #5 which is going into retirement after 51 years of service.