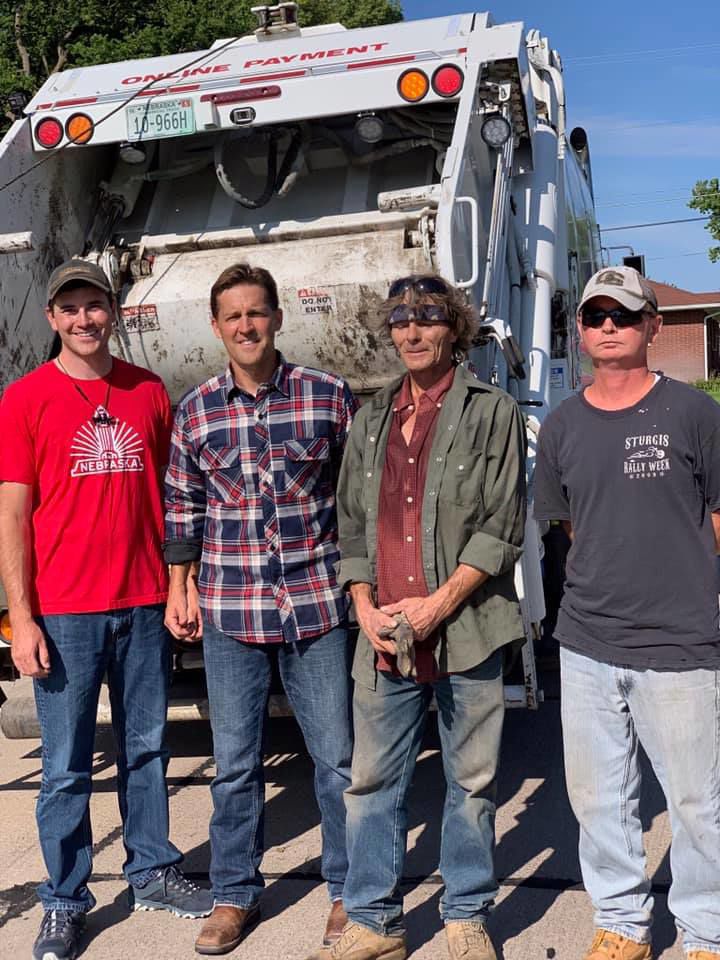 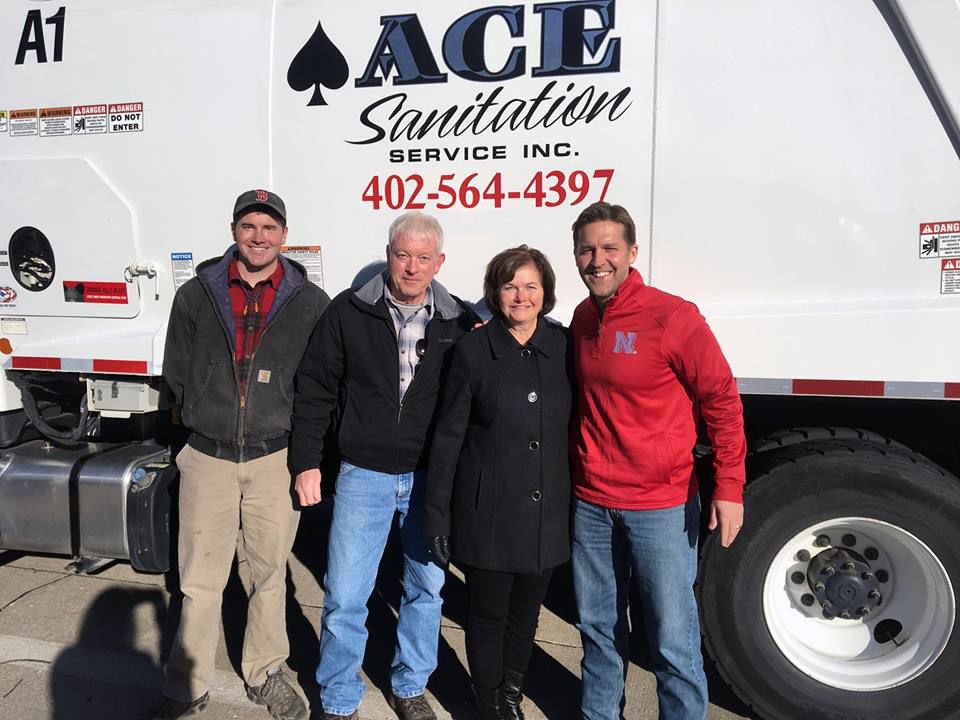 Current Ace Sanitation Service owner Mitchell Peterson, left, then-owners Don and Mary Peterson and Ben Sasse pose for a photo about a year-and-a-half ago when Sasse helped with a trash route in Columbus while taking a break from his senatorial duties in Washington D.C. 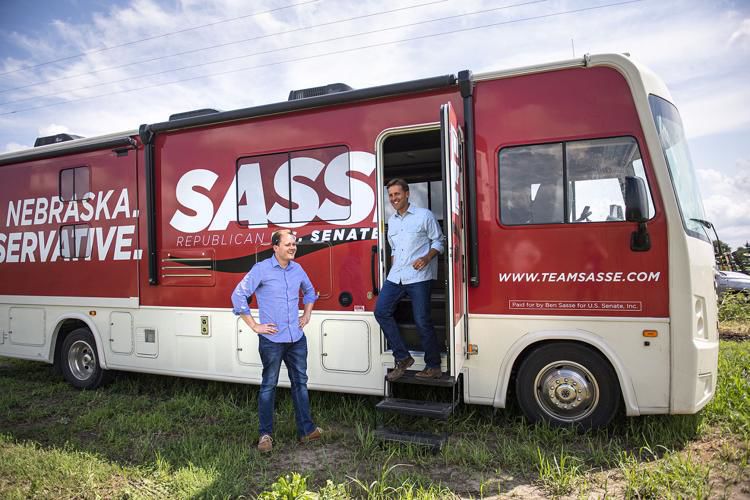 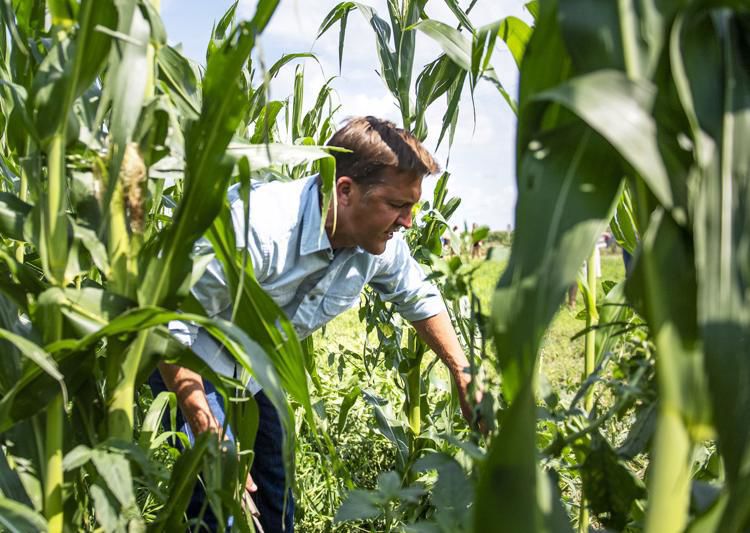 U.S. Sen. Ben Sasse works his way through a field on a recent day while touring the State of Nebraska as part of his recently-kicked-off reelection campaign.

The Nebraska representative for the second time in the past three years changed out of his suit into more labor-suitable clothing to spend a few hours with employees of Ace Sanitation Service on one of their several local trash/refuse routes.

This time, Sasse was in town as part of the kickoff of his statewide re-election campaign, in which he plans to swing through all 93 counties mingling with local residents and assisting a variety of state operations.

“Nobody works harder than Nebraskans – and this campaign is going to work just as hard to earn our state's votes," said Sasse through a provided statement. “Just like we did last campaign, my family is hopping back in the RV, getting out on the road to meet Nebraskans, talking to them about the American idea, about limited government, and about freedom."

Sasse was first elected to the Senate in 2014 and will rely on the votes of state constituents in November 2020 to retain his Senate seat.

Mitchell Peterson, owner of Ace Sanitation Service, said that the first time Sasse visited his family’s business – then owned by his parents, Don and Mary – that he was still learning the ropes of the operation. Peterson purchased the business from his parents the first of this year.

“The first time he came along was right after he wrote ‘The Vanishing American Adult.’” Peterson said. “And it was funny because it’s about blue-collar work disappearing and about how the work ethic is kind of disappearing, and he was seeing me at the time fresh out of college preparing to take it (the business) over.”

This year’s meet-up was coordinated through a family friend of the Petersons working on the Sasse campaign. Interestingly enough, Ace Sanitation recently bought out another local refuse business, Big Red Sanitation, which Sasse has ties to.

“He wrestled with the (then) owner’s son back in the day,” Peterson said of Sasse, a 1990 graduate of Fremont High School.

While in town, Sasse, clad in a plaid shirt and jeans, positioned himself on the back of a dump truck and spent some time navigating one of Ace's many Columbus routes.

“We had him on the back of the truck – he was tipping carts and lifting cans,” Peterson said. “It was a residential route and we probably hit 40-50 stops.”

Peterson said that Sasse had a welcoming attitude and was fun to be around, albeit he was definitely focused on what needs to happen to be victorious when people hit the polls.

“We talked to him a little bit (about the election), and you could tell he was in campaign mode with the language he was using,” Peterson said. “Some of our employees were asking about a different thing, and he was ready to go with answers.”

Taylor Sliva, Sasse’s Nebraska press assistant, said through a provided statement to The Telegram that Sasse has been doing a little bit of everything during this campaign outing.

“Just in the first week since announcing his re-election campaign, Ben has crisscrossed our state working and learning from Nebraskans,” Sliva said. “He’s worked at feedlots, detasseled corn, went door-to-door in a bunch of communities, and worked a garbage truck route serving families in Columbus.”

Some of his key talking points on the campaign, Sliva said, are working to combat aggression from China and Russia, fighting to put strong constitutionalists in court systems, fighting for solid agricultural trade, mitigating cyber threats and addressing the nation’s looming debt crisis.

Sasse, a member of the Senate’s intelligence, judiciary and banking committees, arguably knows things surrounding the U.S. government that 99 percent of people don’t, but last week, he undoubtedly learned a few new things while getting his hands dirty in Columbus.

Peterson said it was definitely a sight to see.

“It’s not every day you have a U.S. senator driving with you in a garbage truck,” he said, with a laugh. It was definitely a little different.”

Current Ace Sanitation Service owner Mitchell Peterson, left, then-owners Don and Mary Peterson and Ben Sasse pose for a photo about a year-and-a-half ago when Sasse helped with a trash route in Columbus while taking a break from his senatorial duties in Washington D.C.

U.S. Sen. Ben Sasse works his way through a field on a recent day while touring the State of Nebraska as part of his recently-kicked-off reelection campaign.