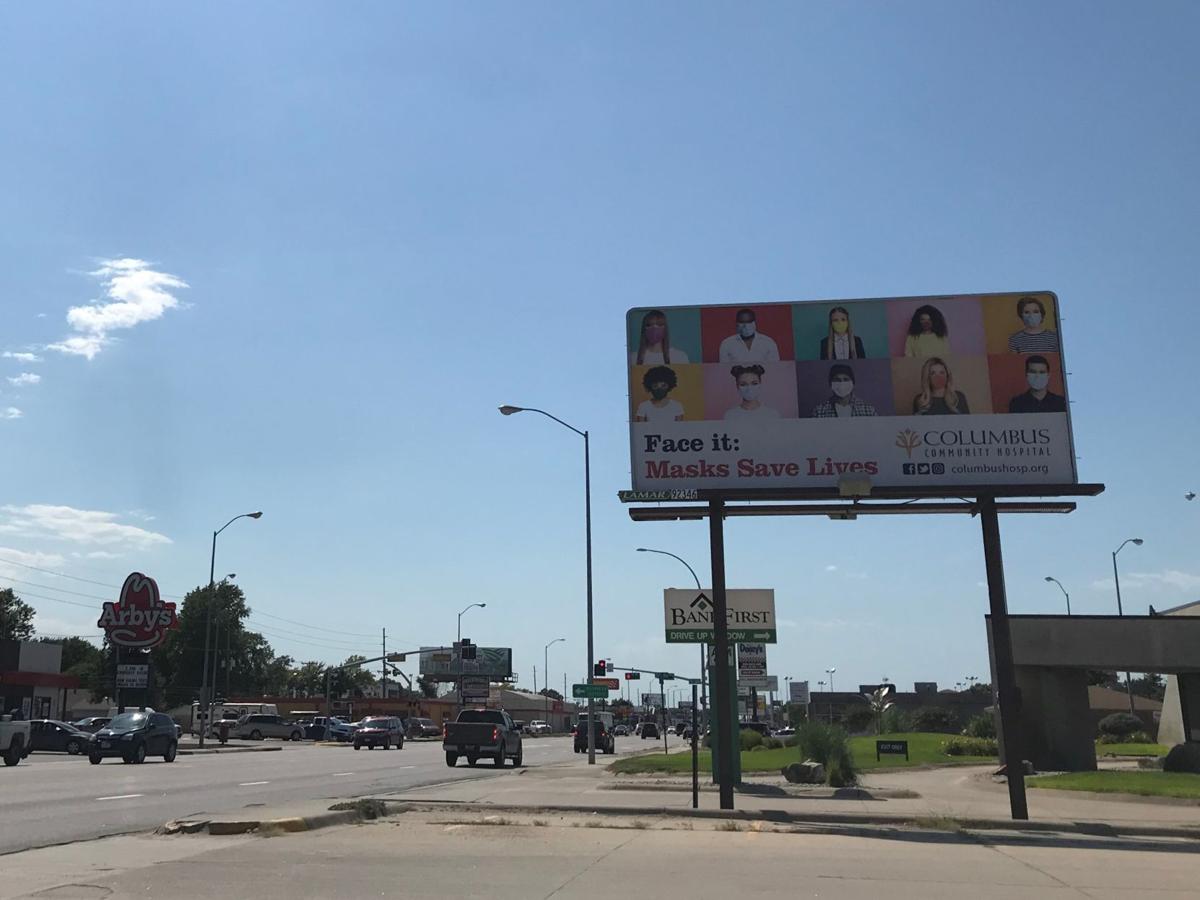 In early August, a billboard located along 23rd Street in Columbus promotes the use of masks to control the spread of COVID-19. The City is exploring its options for a mask mandate. 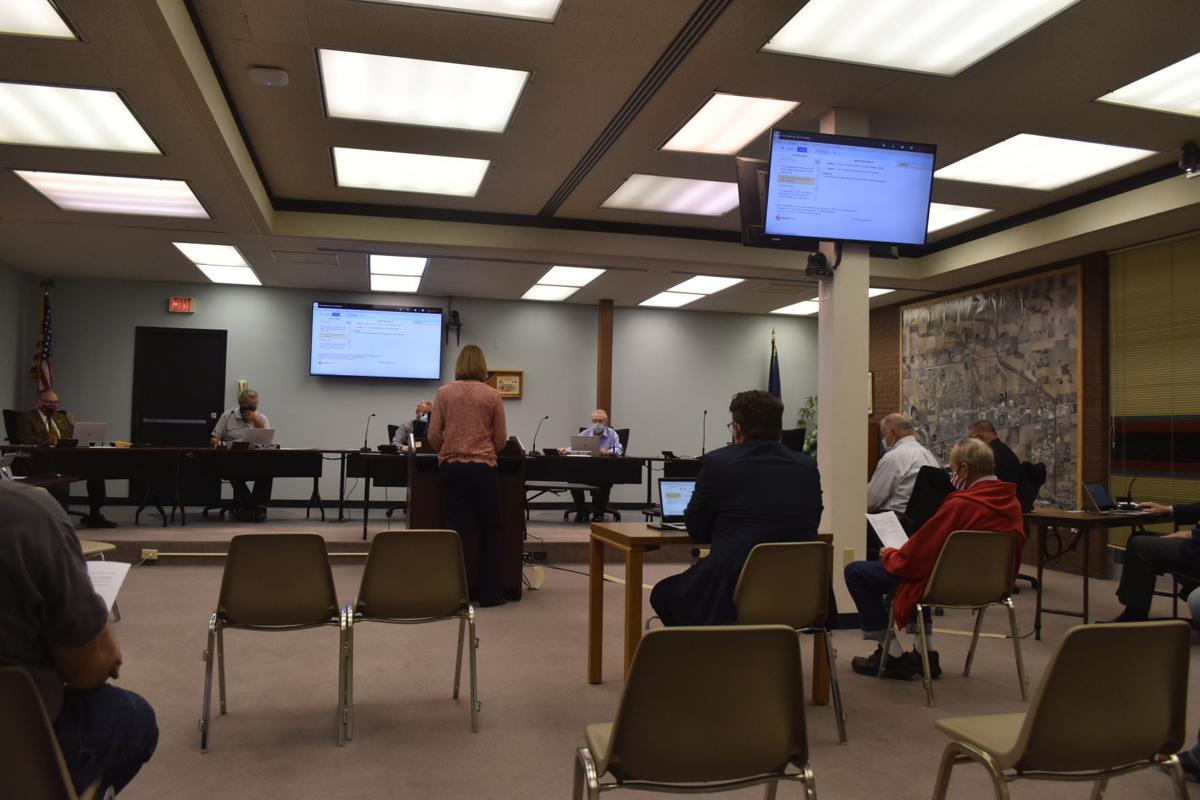 The Columbus City Council during an October meeting.

The Columbus City Council will hold a special meeting at 7 p.m. on Tuesday to conduct a public hearing on an emergency ordinance to establish a mask mandate and to potentially adopt said ordinance.

The move comes less than a week after Mayor Jim Bulkley said he wished there was a statewide mask mandate but expressed doubts about whether Columbus was legally able to create one. Other cities have passed mask mandates in the past week, including Beatrice and Kearney.

On Nov. 17, the Beatrice Board of Health passed a mask mandate for all indoor public facilities in the city limits of Beatrice.

The Beatrice mandate also requires bar and restaurant patrons to remain seated and limits parties to eight people. It is effective through Dec. 15.

Beatrice also closed city buildings on Nov. 18 due to staffing issues and "in the interest of protecting the public," according to a notice on the city website.

The Kearney ordinance requires masks indoors for people over age five who do not or cannot maintain 6-foot social distancing.

The Kearney mandate goes into effect on Nov. 23 and is set to last until Feb. 23.

Bulkley said Columbus is using the Kearney ordinance as a starting point for its own mandate.

"Because we did not enter into a memorandum of understanding with the Two Rivers Health District, we did not turn over authority to them," Clouse said. "Legally, we felt we had the right."

The Kearney Board of Health, which has existed for several years, met, discussed the idea of mandate and recommended the city council put one in place.

Bulkley said he asked City of Columbus officials to look into the City's ability to prescribe a mask mandate on Monday, before the Kearney ordinance was passed.

"We found out this morning Norfolk is also looking at doing something," Bulkley said on Friday. "If we can all be similar, it will make life easier."

Bulkley added that the mandate will be time-limited.

"We have an expiration date in the ordinance, and I'd be the first to say that if things look much better in January, we can always rescind the ordinance," Bulkley said.

With regard to the availability of masks in Columbus, Bulkley said he is confident there are enough to meet the City's needs under a mask mandate. Many stores, he said, are already making masks readily available.

Meanwhile, Hastings and Grand Island have their own votes scheduled for Monday and Tuesday, respectively. Ralston, Gretna and La Vista have also scheduled emergency council meetings, according to The Telegram's sister paper the Omaha World-Herald, which said Bellevue and Papillion were exploring legal options.

Ricketts has continued to oppose mask mandates, even as other midwestern governors change their minds, such as Iowa's governor who designed a mask mandate on Monday.

When asked during a Thursday press conference to respond to the growing number of local governments considering or enacting mask mandates in Nebraska, Ricketts said he would encourage them to check their legal authority to do so.

Under Nebraska Revised Statute section 16-238, cities with between 5,000 and 100,000 residents can "make regulations to prevent the introduction and spread of contagious, infectious, or malignant diseases into the city."

Revised Statute 17-121 gives cities with between 800 and 5,000 residents similar powers to "make regulations to prevent the introduction and spread of contagious, infectious, or malignant diseases into the city, to make quarantine laws for that purpose, and to enforce such regulations."

During the Thursday press conference, UNMC medical experts urged Ricketts to take action by adopting a mask mandate for the state.

Ricketts has said he believes a mandate would inspire opposition.

Bulkley said he knows there will be opposition to a Columbus mask mandate, but hopes it will be minimal.

"I am bringing forth something that I believe is necessary. I wish the governor had done it but he didn't," Bulkley said.

In Kearney, Clouse said the mask mandate has been one of the most divisive issues he's seen in his 16 or 17 years on the city council.

He and most council members, Clouse said, were ultimately swayed by the impact of COVID-19 on the health care professionals who are their friends, family members and neighbors.

"It was about what my health care professionals (were) telling me and what stress levels are we putting on our hospitals and our nurses. That said more to me, that we need to help them any way we can," Clouse said.

Carolyn Komatsoulis and Molly Hunter are reporters for The Columbus Telegram. Reach them via email at carolyn.komatsoulis@lee.net and molly.hunter@lee.net.

In early August, a billboard located along 23rd Street in Columbus promotes the use of masks to control the spread of COVID-19. The City is exploring its options for a mask mandate.

The Columbus City Council during an October meeting.