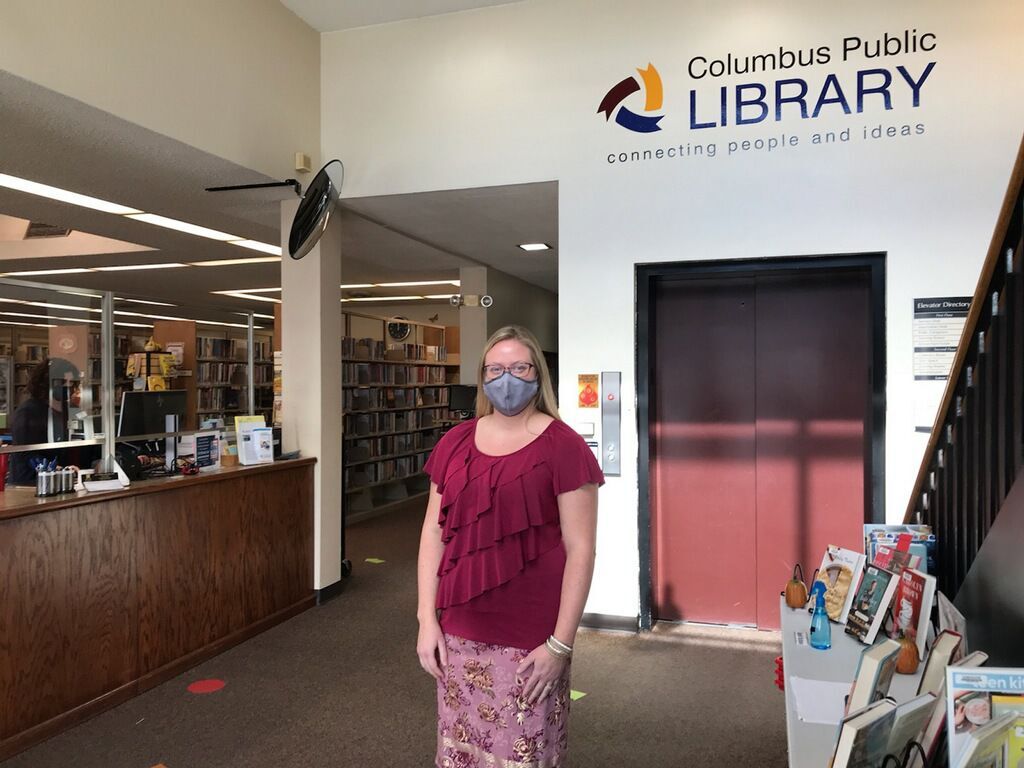 Library Director Karen Connell poses in the Columbus Public Library Wednesday. The Library will be moving to a temporary location following the passage of the Community Building Project. 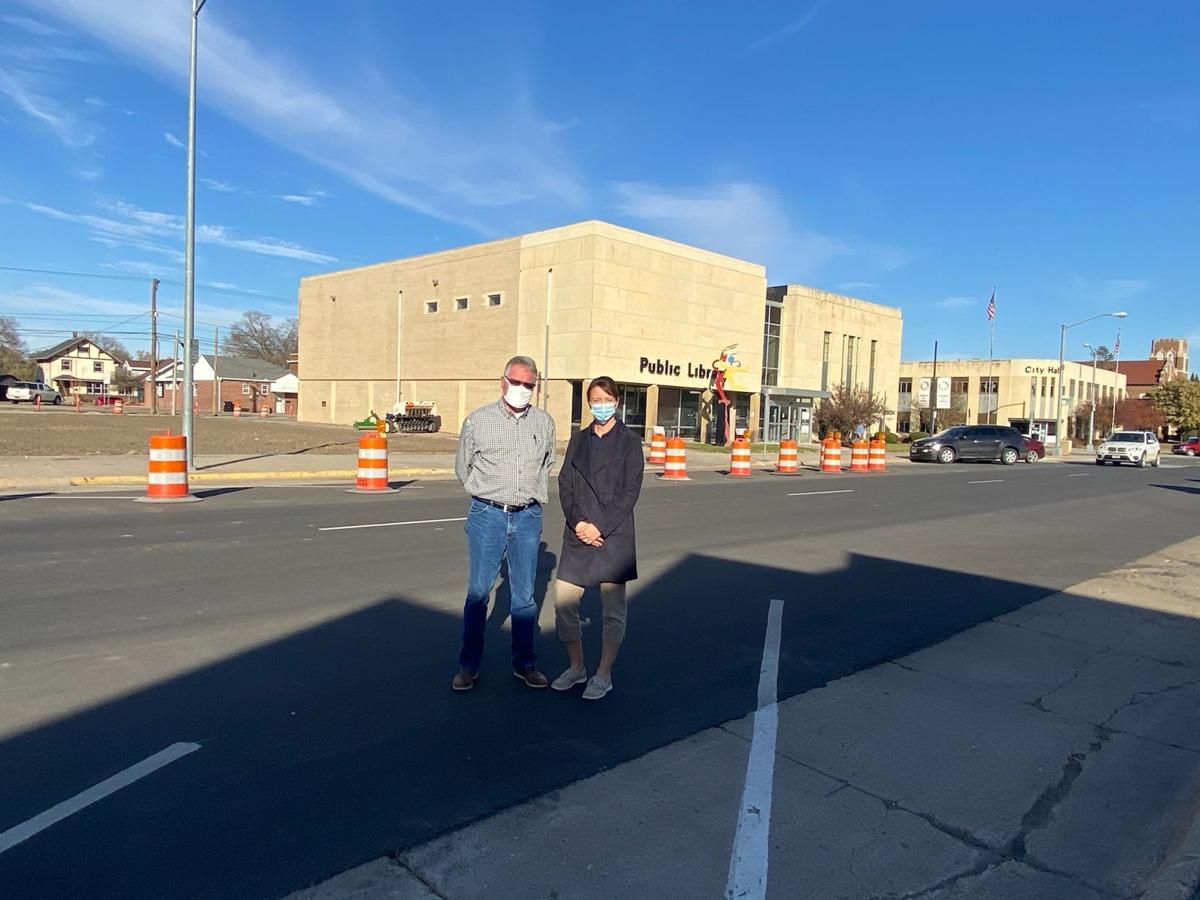 Mayor Jim Bulkley and City Administrator Tara Vasicek stand downtown Wednesday, with City Hall and the Columbus Public Library in the background. Both the library and City Hall will occupy the same building, expected to be completed in 2023.

The question this year asked residents to authorize bonds for a project that includes tearing down City Hall and the library, 2504 14th St.

In those lots, a larger structure will be built that includes the library and space for a potential children’s museum, as well as an art gallery, coffee shop, community room and City Hall. The City Hall portion of the project would be paid for by existing funds and revenue.

The bonds are to be issued using funds from an existing sales tax approved by voters in 2016.

"We were getting input from the community each step of the way and made the project not just ours. The community designed it for themselves," said Columbus Public Library Director Karen Connell, who was the reference librarian during the last ballot measure.

In addition to Connell and City Administrator Tara Vasicek changing their outreach strategies, Connell said the Library Foundation spent $44,000 on advertising, significantly more than in 2017.

Although the votes were delayed, the project passed by a margin of over 2,000 votes. According to unofficial election results from the Platte County Election Commissioner's Office, 5,738 people voted in favor of the project and 3,581 voted against it.

In 2017, the previous measure failed by a margin of 251 votes. Connell said turnout this time around was helped as the question was on a general election ballot.

"You have more of an opportunity to catch the people who are for it but not necessarily like 'I'm going to rearrange my whole life to make sure I go vote,'" Connell said. "Even people who are kind of neutral and for some reason hadn’t heard anything about it ... If (the ballot language) is written well, they might make their decision right then."

The ballot language this time around was very clear, she added.

The City had a contract with Clark Creative Group and rolled out an education campaign a couple months ago, which was partially intended to make sure voters got the right information.

At the same time, the Library Foundation rolled out a persuasive campaign, also with Clark Creative Group.

"They were able to use the same graphics so that it looked like a cohesive message," Connell said.

City leaders stressed this project is different from the previous one and did not involve a new tax.

Vasicek said this time around the process speaks for itself. The City took the past failure to heart, she said, and that is why they went back to the drawing board.

"We had a lot of feedback throughout the process that it was taking a long time, but I think to really do it right and to get everybody engaged, it does take some time," Vasicek said. "Now we’ve got a project that we can move forward with, and it's going to be great for the community of Columbus."

As far as next steps, there will be a meeting on Thursday with the main project stakeholders which includes the architect, the construction manager at risk, City Engineer Rick Bogus, Vasicek and Connell.

"We’ve selected a moving company. We actually did that early so we could have enough time to get that negotiated, so on the Nov. 16 City Council meeting we will have our contract for moving services," Vasicek said.

The Nov. 16 agenda will also have the contract with the architect.

The contents of the library will be moved to the temporary library space after the first of the year, she noted.

"So the library where it is now would be moving in January to February of 2021 and then, as soon as weather allows, in the spring of 2021 ... we would work with (the demolition) of the current library and construction," Vasicek said. "The new building is projected to be completed early 2023."

It will take two years to build it completely, have it ready for use by the public and have everyone moved into it, she said.

"That’s about the same that it took fire and police to get built, too," Vasicek said. "And it’s a bigger building than both."

There will also be next steps for the children's museum part of the Community Building Project, which was not part of the bond question.

"It was a shell space that’s going to be potentially leased to a children's museum and so fundraising efforts will be starting up in the very, very near future for private donations to fulfill the museum," said Tim Kacena, a member of the Children's Museum Advisory Board.

Those efforts would start within the next couple of months, Kacena noted.

The museum is an economic draw to the community and is an opportunity for kids to continue onto their education from what they're learning at school, he added.

"It's going to be exciting to take it from concept to reality ... so regardless of (if) the bond passed or not, the advisory board was still going to be intact and we were still going to be looking for a facility," Kacena said. "But now that this came about it, provides us so many more opportunities to make it even bigger and better so we're really excited about that."

The children's museum is one of the changes from 2017 to now, which Mayor Jim Bulkley said would bring young parents into the fold. There were other changes the City made as staff refined the project, he noted.

Perhaps the most excited is Connell, who said it was not a happy time when the previous project failed. That 2017 ballot question had asked voters to issue $8.5 million in bonds to construct a library/cultural arts center.

"It was hard for all of us," Connell said. "Quite a few of us that work here had long hair and out of our depression, we all cut our hair ... But yeah, no I'm excited about it."

Editor's note: To finish off 2020, staff members of The Columbus Telegram's newsroom are taking time each day this week to reflect on what wer…

WATCH NOW: Library to move into temporary location in March

Those wanting a piece of what is inside the Columbus Public Library before its demolition can do so this weekend thanks to an auction.

Library Director Karen Connell poses in the Columbus Public Library Wednesday. The Library will be moving to a temporary location following the passage of the Community Building Project.

Mayor Jim Bulkley and City Administrator Tara Vasicek stand downtown Wednesday, with City Hall and the Columbus Public Library in the background. Both the library and City Hall will occupy the same building, expected to be completed in 2023.