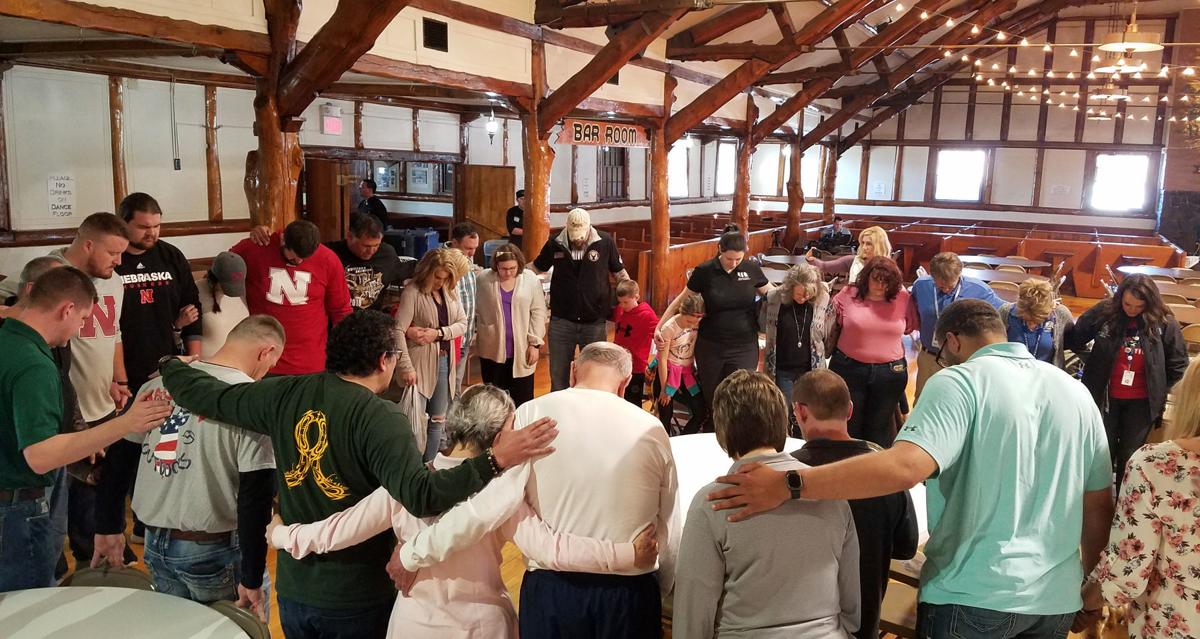 A group of Nebraskans from all over join former Husker football players in prayer before the start of a community dinner on March 21 inside Schuyler’s Oak Ballroom. 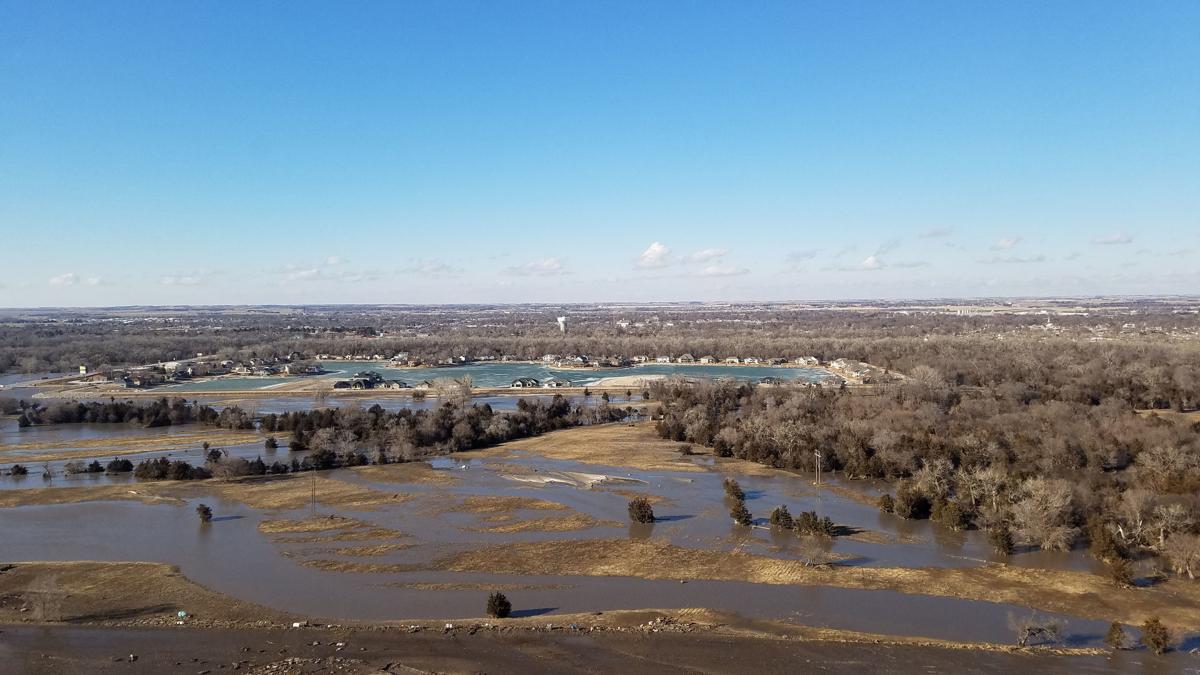 A view looking north toward Columbus from aboard the Husker Helicopter on on March 19. 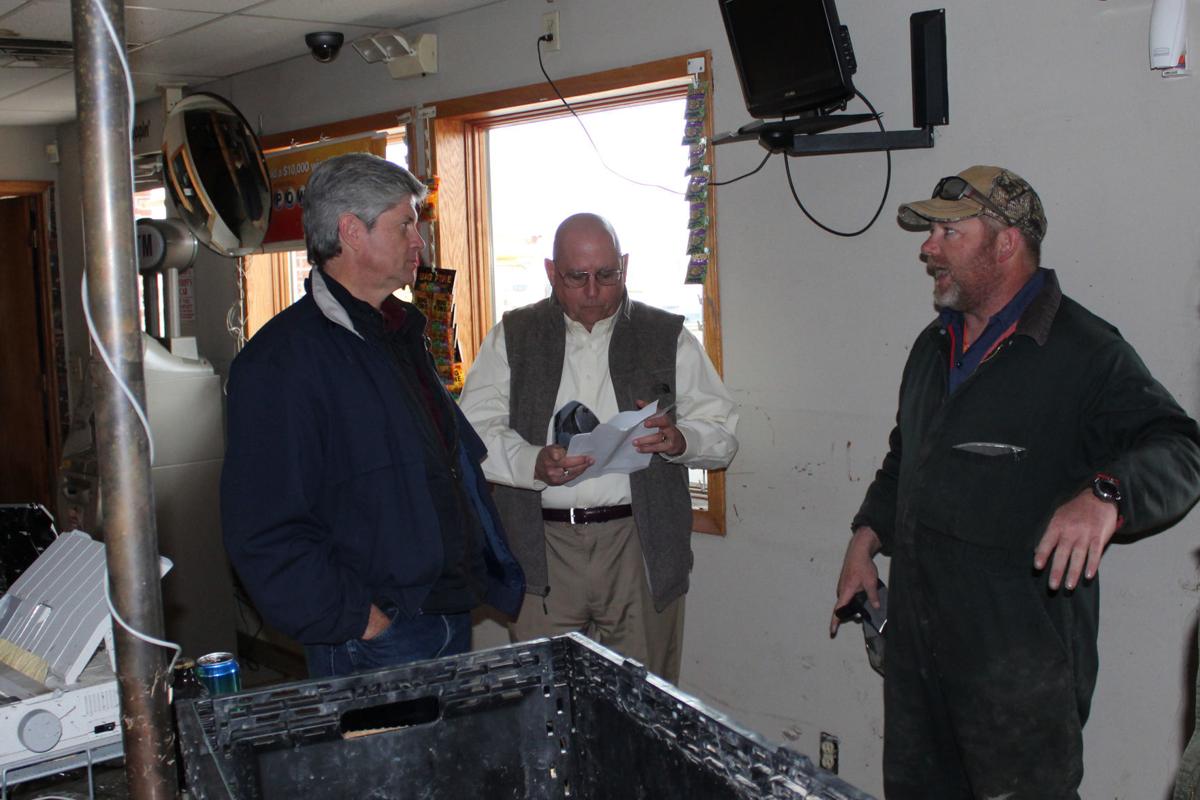 Congressman Jeff Fortenberry, left, stands with Platte County Board of Supervisors Chairman Jerry Engdahl, center, in March as they tour the T-Bone Truck Stop once flood waters receded. The duo here talks to Fred Leibhert, a fuel manger at the station. County business owners affected by the flooding are now able to have a state Department of Labor representative, free of charge, assess the safety and health conditions of their establishments. 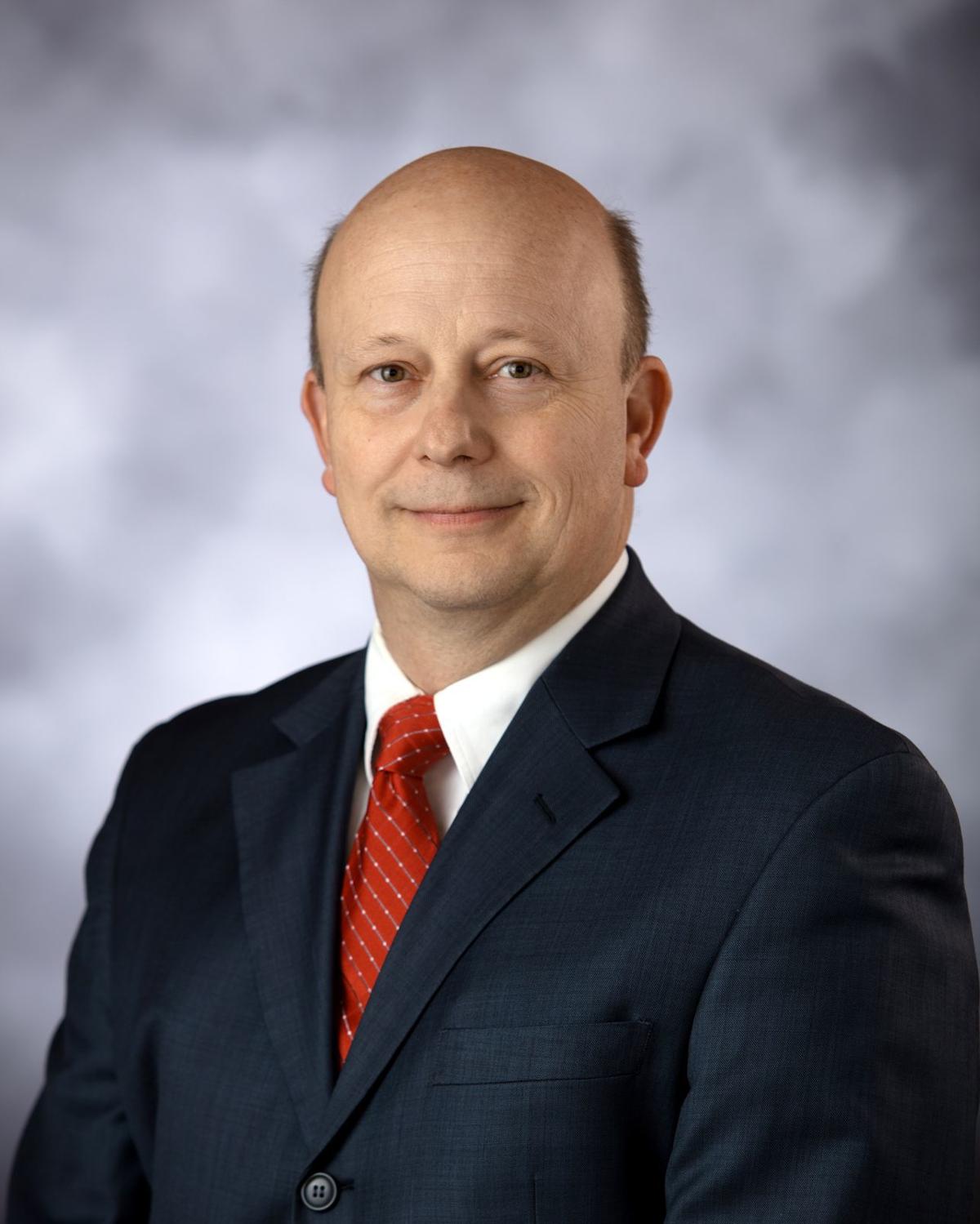 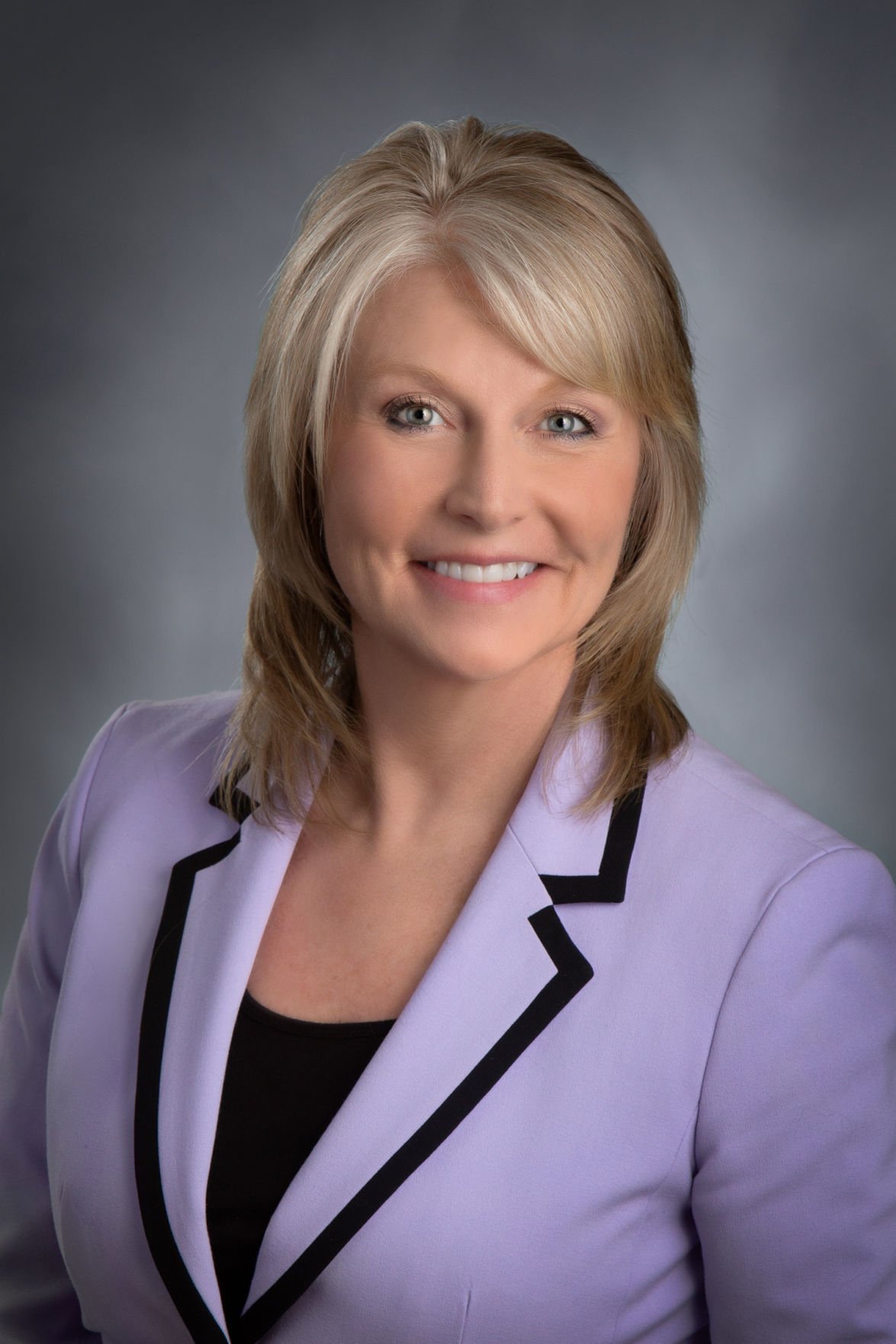 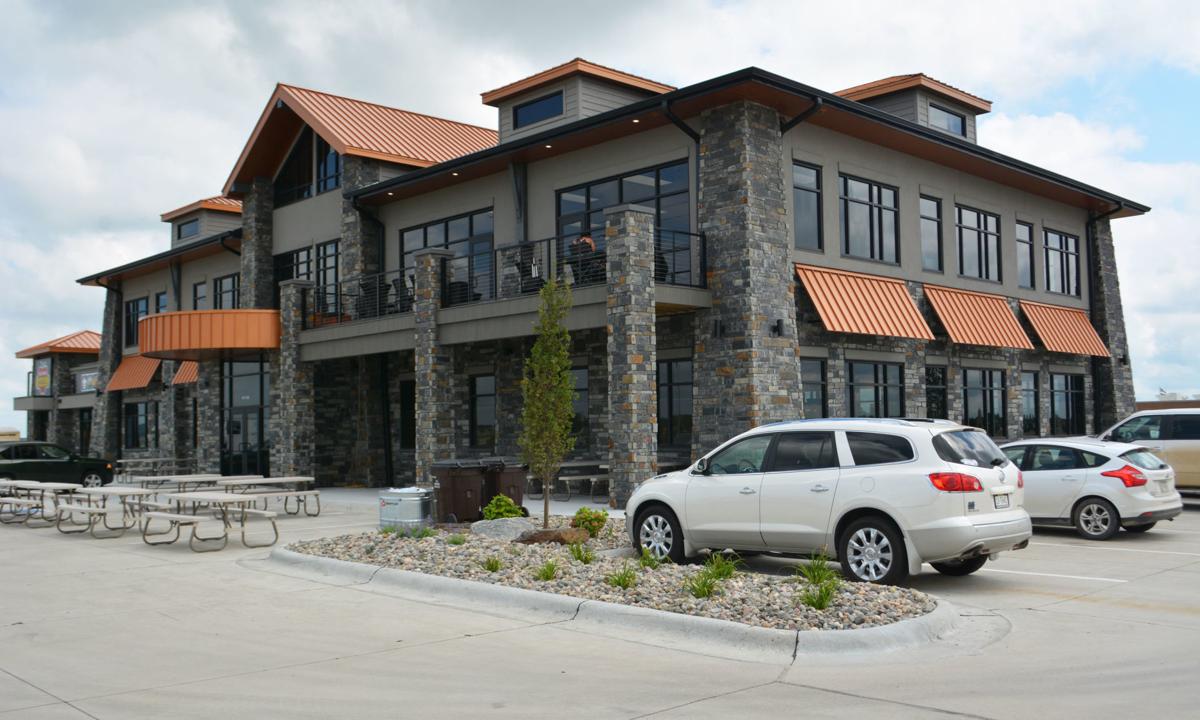 A group of Nebraskans from all over join former Husker football players in prayer before the start of a community dinner on March 21 inside Schuyler’s Oak Ballroom.

A view looking north toward Columbus from aboard the Husker Helicopter on on March 19.

Congressman Jeff Fortenberry, left, stands with Platte County Board of Supervisors Chairman Jerry Engdahl, center, in March as they tour the T-Bone Truck Stop once flood waters receded. The duo here talks to Fred Leibhert, a fuel manger at the station. County business owners affected by the flooding are now able to have a state Department of Labor representative, free of charge, assess the safety and health conditions of their establishments.

Editor's note: The following is a list of three of the biggest news topics of the year in Columbus and Platte County based on the most-read and most commented on stories written by staff.

Catastrophic flooding in March 2019 ravaged much of eastern Nebraska, including communities in Platte, Colfax and Butler counties.

Columbus residents James Wilke and Betty Hamernik died in mid-March as a result of the flooding. Wilke, 50, died attempting to rescue others in need. With the guidance of emergency responders, James drove his tractor over the Shell Creek Bridge on Monastery Road, but the bridge gave out, and James and his tractor fell down into the floodwaters. His body was recovered later by a nearby creek bed.

“That was the kind of person James was – if he got the call from someone needing help, he was going to help somebody,” James’ cousin, Paul Wilke, told The Telegram back in March about his cousin, who has since been heralded and honored as a hero.

Hamernik, 80, died in her rural Columbus home after first responders were unable to reach her in time amidst the floodwaters tearing through rural portions of the city and much of surrounding Platte County. Her body was recovered on Sunday, March 17, once wind and water conditions allowed for responders to navigate into her home.

“It was a tough thing for a lot of us, so many in the church were moved by her passing and thought it was a terrible tragedy,” The Rev. Patrick Sparling of Immanuel Lutheran Church in Columbus said of the late resident. “But we know that she is with the Lord in heaven and that is the good news for us right now. And she knew that was what was going to happen at the time of her death, and that is good news for everybody.”

The flooding was devastating for much of Platte County, as emergency disaster centers opened up locally to help those affected. City and county leaders collaborated to help keep people safe, while area farmers and businesses saw everything – including livestock – go completely underwater. The effects of the flood can still be felt today, as those in the ag industry continue to deal with the ramifications of crops and animals lost, and business owners try to get back on their feet. Roads and bridges continue to be under repair.

One silver lining of the natural disaster was the generosity residents showed one another through trying times. Numerous fundraisers and other campaigns were held to help flood victims in the area and state, including one in late April at Columbus’ Ag Park that raised thousands of dollars. People and businesses donated money, food, clothing and their time to various campaigns to help those in need.

In late March, former Husker football players Jeremiah Sirles, Spencer Long, Brent Qvale, Cody Green and Zach Sterup visited neighboring Schuyler to host a community meal for those in the area affected by the flood and offer a little hope.

The former Huskers, in conjunction with Columbus resident Saul Soltero and his family, Whitetails Unlimited and the Colfax County Attorney’s Office, orchestrated the special event.

“Nebraskans take care of their own,” said Sirles, who was a guard for the Buffalo Bills at the time. “All of the guys here, we’re Nebraskans. Whether we live in Lincoln, Columbus or Schuyler, we just all take care of our own.”

Early March was the end of an era in Columbus and the start of another.

Longtime Columbus Area Chamber of Commerce President K.C. Belitz officially stepped away from the role and Jeanne Schieffer stepped in as his successor. Belitz had been the leader of the chamber for 18 years, resigning to take on a new opportunity as chief operating officer of the Nebraska Community Foundation.

The community came out in grand fashion in early March for a celebration in Belitz’s honor at Dusters in downtown Columbus.

“With a little time for reflection, I am deeply grateful for my time at the Chamber. I learned a lot, gained experience that will serve me well for the rest of my career, built deep relationships with colleagues and volunteers, my family got fully engaged in Columbus,” Belitz told the Telegram this week. “It gave me the opportunity for a front-row seat to lots of significant developments in my hometown…that’s way more than just a job! I really reflect on the talents of that Chamber staff team over those years – I was really lucky to work with and learn from those talented professionals!

“Thinking back on that celebration, it’s really humbling. I’m very aware that the celebration was a result of what the team of staff and volunteers did at the Chamber over those 18 years and I was lucky enough to be there to witness all that good work and that celebration gave me more credit than I deserved.”

Schieffer, after years of working in leadership roles at Nebraska Public Power District, took over the reins and has continued to help the Chamber flourish. She credited Belitz and the other chamber staff members, among others, for helping make it a smooth transition.

“I inherited the Chamber’s strong program of work and culture of community collaboration, which makes being in this position such a blessing and privilege,” Schieffer told the Telegram this week.

The Chamber hosted various community events and had a hand in numerous projects throughout the year, in addition to helping those in need in the aftermath of March’s historic flooding. Schieffer praised the community for its efforts.

“We saw the integrity of our emergency response organizations, reliance in the homeowners, farmers and businesses impacted, and the generosity of one another in the aftermath of one of the most devastating disasters in our state’s history. We heard the saws and hammers of construction crews for more than more than 15 housing developments which are starting to fill a gap in affordable home options,” she said. “We are driving past more than $165 million in new investments in our community, the bulk of which is in new commercial businesses, safety infrastructure, industry expansion, corporate office relocations, churches and our hospital …”

Schieffer reiterated her commitment to propelling the community toward a bright future by discussing numerous efforts in the works, such as finding employees to fill more than 700 job vacancies in businesses and helping with economic development in the area.

Berkshire Hathaway Home Services/Premier Real Estate Broker/Owner Renee Mueller’s longtime vision to help the community on a massive scale came to fruition in 2019 with the opening of the Parkway Plaza building.

Located at 4471 41st Ave. in north Columbus, the beautiful two-story building is not only home to her Berkshire office, but several other local businesses that she helped bring to town: All Makes Office Equipment, Applied Connective Technologies and Charter Title & Escrow. It will also see the addition of Big Apple Bagels, which is expected to open its doors on the lower level of the building later this year.

Mueller this week said she and others involved with the building have always been dedicated to giving back to what she called a “great community,” noting Parkway Plaza is one way it will continue to do so for generations to come.

“We wanted a hub that housed businesses that supported one another and kept businesses and jobs in Columbus, keeping businesses local as much as possible, fuels our local economy, and I am all about growing the awesome foundation we already have in place,” Mueller said. “This project took over two years to see completed and turned out exactly as I had envisioned! We still have work to do but so far it has been a great and rewarding experience.”

Could you pass a U.S. civics test?

How much do you know about Halloween?