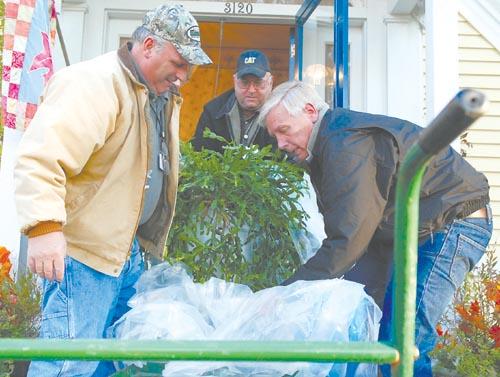 Dan Wemhoff, Jerry Konret and Steve Schnieders move a 100-year-old Christmas cactus from the home of Nancy Saalfeld to its new location at the Columbus Community Hospital Friday morning in Columbus. Telegram photo by Blaine McCartney 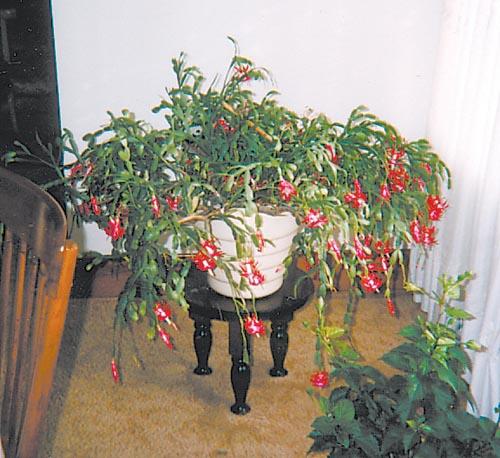 The 100-year-old Christmas cactus is shown in bloom during a previous year. Courtesy photo
By Eric Freeman

COLUMBUS — Arden and Nancy Saalfeld, of Columbus, have a living family heirloom that recently found a new home at Columbus Community Hospital.

The Saalfeld’s 100-year-old Christmas cactus, which has been in Nancy’s family since at least 1908, is 5-feet across and weighs an estimated 200 pounds.

The cactus was donated to hospital in time for the plant’s annual bloom, which typically occurs between Thanksgiving and Easter each year.

“My grandmother, Mrs. Fred (Lena) Schwarz, was married in 1899, and we figure they got the plant about 10 years later,” Saalfeld said. “We’ve had the cactus in our home since 1977 and some members of our family have cuttings that we know are at least 60 years old.”

Susan Nelson, executive director of the Columbus Hospital Foundation, worked with the Saalfelds to place this unique donation into service at the hospital.

“When Nancy contacted me about the plant, I was touched by the story,” Nelson said. “I was touched that this was something that had traveled several generations and was humbled that they felt this would be a good place to entrust it to.

“We don’t ordinarily accept items like this, but the skilled nursing unit staff felt this would be something the patients would enjoy taking care of. It should bloom during the coming holiday season and will add a lot to the floor,” she said.

The Columbus Community Hospital Foundation (CCHF) was established in 2001 when the hospital moved to its present location at 4600 38th Street.

The work of the foundation is to raise funds to support the health care mission of hospital. The foundation accepts cash contributions of all amounts in support of the hospital’s mission.

The mission and purpose of the foundation is achieved through the gifts and endowments that are administered through a variety of funding categories.

“The Foundation seeks major gifts in support of our endowment,” Nelson said. “Endowment funds are invested and only the income is used each year.”

She said endowment funds provide a steady stream of interest income that is used to purchase equipment and to make capital improvements to the facility. A portion of these funds also is designated for various programs that support the hospital mission.

Nelson said contributions made to the Greatest Need Fund do not have a donor-specified purpose. When added to other unrestricted contributions those funds are used to meet the hospital’s greatest needs as identified by the staff and administration.

Nelson said memorial and tribute gifts are given in memory of a loved one. These are generally smaller gifts added to the hospital’s greatest needs funds.

“Gifts of cash generally come through wills, however, there are other ways of giving in this area that can provide an income and tax relief to the donor and which benefit the Hospital upon their death,” Nelson said.

She said more information about legacy gifts is available through the foundation or a financial planning professional or attorney.

She said these services are provided for Columbus and its extended service area and generally do not generate profits to sustain these programs.

She said that foundation staff are employees of the hospital and the administrative costs of running the foundation are absorbed into the hospital’s budget.

“This means that 100 percent of the gifts received through the foundation are used for their intended purpose,” Nelson said.

The hospital foundation hosts an annual fundraising golf outing each summer which in 2008 was host to 132 golfers and raised more than $67,000 for programs of the Hospital.

She said the Columbus Community Hospital Auxiliary is another arm of the foundation which has raised more than $1 million since its founding in 1975.

“The auxiliary is a group of volunteer women who put on various events to support the hospital and who also run the hospital gift shop,” Nelson said. “In addition to many smaller events, the auxiliary hosts an annual event each April called Extravaganza which raises more than $20,000 for the hospital.”

Dan Wemhoff, Jerry Konret and Steve Schnieders move a 100-year-old Christmas cactus from the home of Nancy Saalfeld to its new location at the Columbus Community Hospital Friday morning in Columbus. Telegram photo by Blaine McCartney

The 100-year-old Christmas cactus is shown in bloom during a previous year. Courtesy photo
© Copyright 2021 The Columbus Telegram, 1254 27th Ave. Columbus, NE | Terms of Use | Privacy Policy
Powered by BLOX Content Management System from TownNews.com.
You don't have any notifications.