Become a Member
Read Today's E-edition
Share This
After several attempts, wildlife officers remove tire that was around elk's neck for over 2 years
0 Comments
Share this
1 of 3 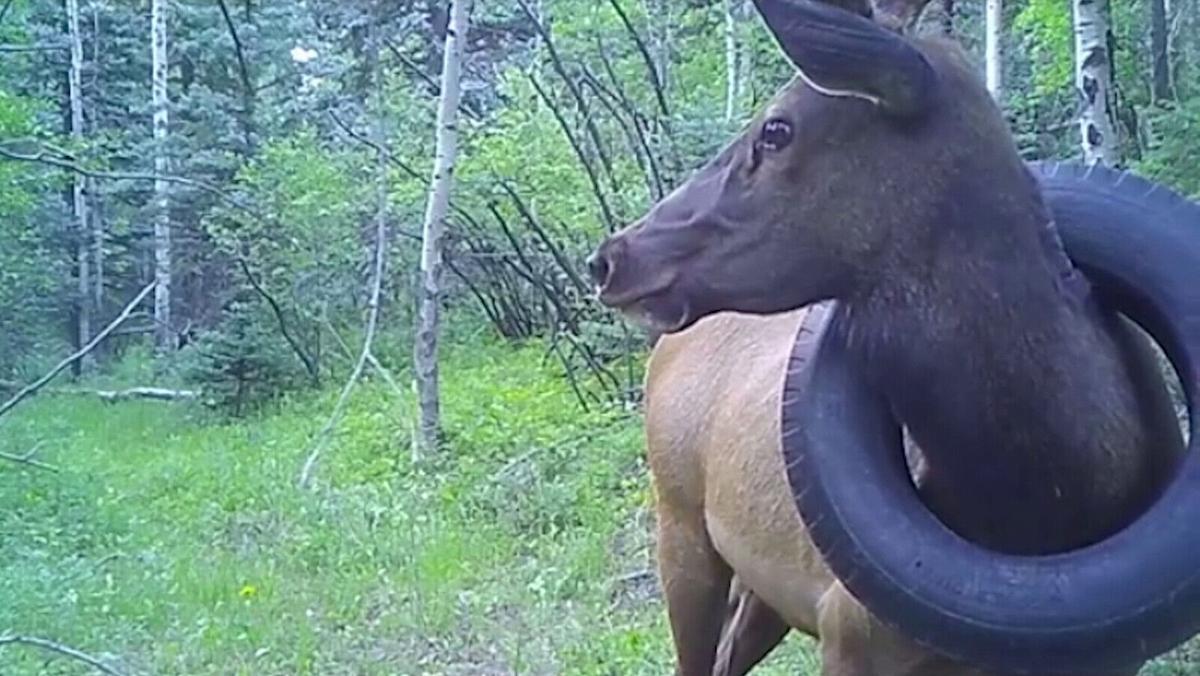 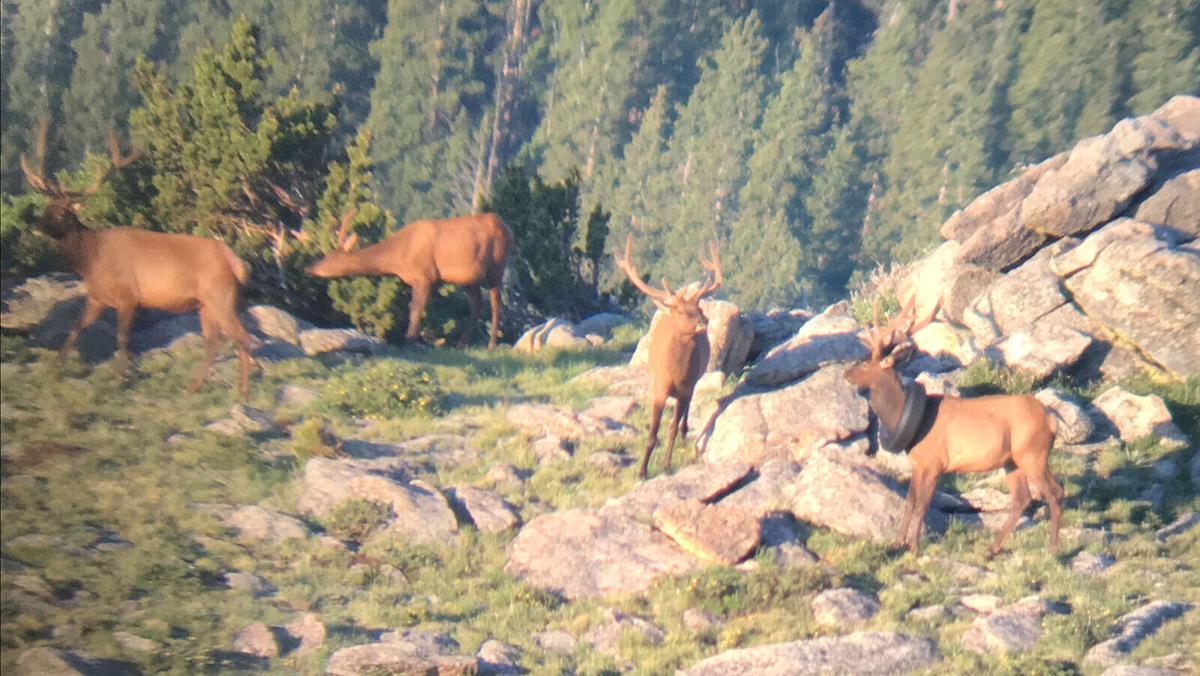 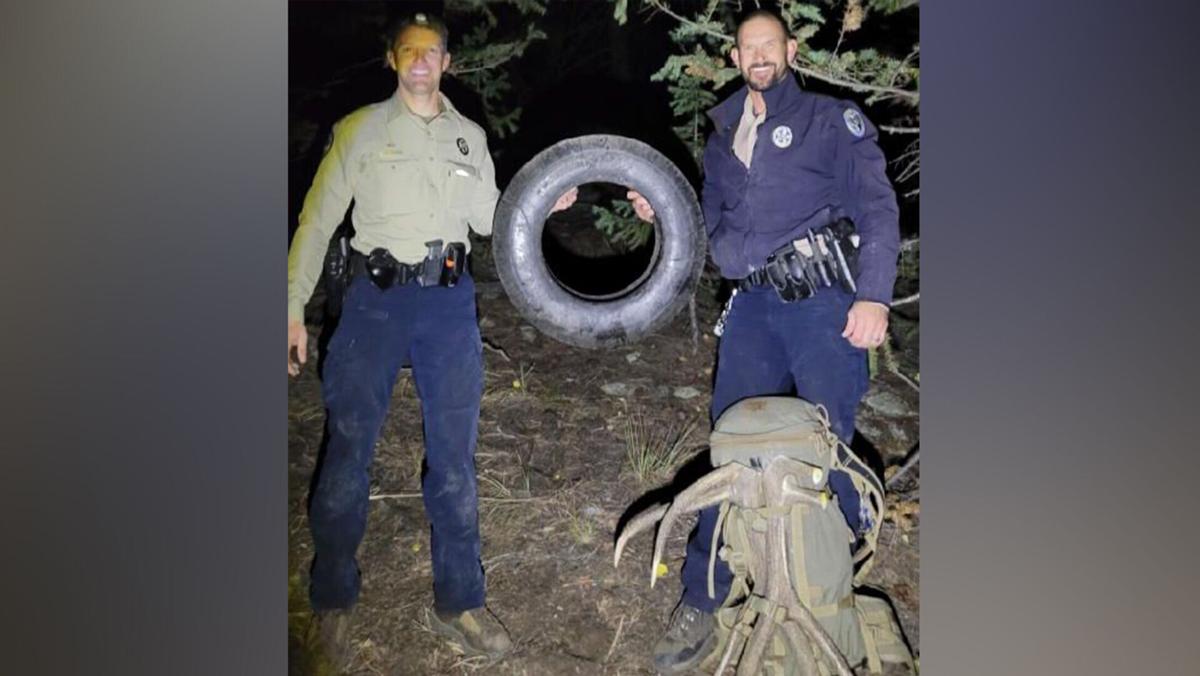 Wildlife officers Murdoch (left) and Swanson (right) hold up the tire that was on this bull elk for over two years.

The bull elk was first spotted by a Colorado Parks and Wildlife (CPW) officer in 2019 conducting a population survey of Rocky Mountain bighorn sheep and mountain goats in the Mount Evans Wilderness, about 30 miles west of Denver, according to a news release from CPW on Monday.

"Being up in the wilderness, we didn't really expect to be able to get our hands on the elk just because of the proximity or the distance away from civilization," CPW officer Scott Murdoch said in the release. "It is harder to get the further they are back in there and usually the further these elk are away from people, the wilder they act. That certainly played true the last couple of years, this elk was difficult to find, and harder to get close to."

Since then the wild animal has been spotted a handful of times by trail cameras and was known to travel between Park and Jefferson counties, reads the release. Wildlife officials monitored the animal over the years and saw the tire wasn't affecting its ability to eat and drink. But officials feared that the animal would become tangled in tree branches, fencing or even with another elk's antlers, according to CPW Public Information Officer, Jason Clay.

CPW released videos and images of the elk through the years in hopes the community would call and report it if seen. Last weekend, a community tip from Pine, Colorado, led wildlife officers to successfully being able to help the 4-year-old.

On Saturday, Murdoch and CPW officer Dawson Swanson safely tranquilized the over 600-pound animal and removed the tire. Officers had to cut off the antlers to slide the tire off.

"It was not easy for sure. We had to move it just right to get it off because we weren't able to cut the steel in the bead of the tire," Murdoch said in the news release. "We would have preferred to cut the tire and leave the antlers for his rutting activity, but the situation was dynamic and we had to just get the tire off in any way possible."

Officers estimated that the tire was filled with 10 pounds of debris and that the elk dropped 35 pounds with the removal of tire and antlers. They also were surprised at the condition of the animal's neck.

"The hair was rubbed off a little bit. There was one small open wound maybe the size of a nickel or quarter, but other than that it looked really good," said Murdoch. "I was actually quite shocked to see how good it looked."

This was the fourth time in a week officers have tired to tranquilize the animal to remove the tire, but several factors including other elk being near hindered efforts.

"Tranquilizer equipment is a relatively short-range tool and given the number of other elk moving together along with other environmental factors, you really need to have things go in your favor to have a shot or opportunity pan out," said Swanson in the news release.

Officers said neighbors in the area assisted and that the elk was back on its feet within a matter of minutes, after they administered a tranquilizer reversal.

The mystery remains to how and when the elk got the tire stuck. But CPW said it either happened when the elk was younger or during the winter when it shed its antlers.

Officials said this elk's saga just highlights the importance for residents to live responsibly with wildlife in mind. They said for people to keep their property free of obstacles wildlife could become entangled in like netting, hammocks, clothing lines and holiday lighting.

Fog of the Mountains

Police: Woman raped on Pennsylvania train as bystanders did nothing

A woman was raped by a stranger on a Philadelphia area train in the presence of other riders who a police official said "should have done something."

Indiana man finds naked female neighbor in his shower, orders her out at gunpoint, police say

"I asked Debra (Jarvis) why she had been in the residence," an officer said. "Debra then looked back at (the home in question), pointed at the trailer and said 'shower.' "

Mike Mitchem said his brother and sister-in-law had not been vaccinated, even though family members urged them to get the shots. “They’d just been leery. They were going off what they’ve been hearing and reading on the internet.”

It wasn't clear if the determination might lead to additional charges against Brian Laundrie, who is considered a person of interest in her disappearance and remains unaccounted for.

Millions of retirees on Social Security will get a 5.9% boost in benefits for 2022, the biggest cost-of-living adjustment in 39 years.

Advice shifting on aspirin use for preventing heart attacks

""They set out to do it, and they did it," the superintendent said. "It has no place in high school athletics."

U.S. health advisers said Thursday that some Americans who received Moderna's COVID-19 vaccine should get a half-dose booster to bolster protection against the virus.

New York real estate heir Robert Durst was sentenced Thursday to life in prison without chance of parole for the murder of his best friend more that two decades ago.

Wildlife officers Murdoch (left) and Swanson (right) hold up the tire that was on this bull elk for over two years.