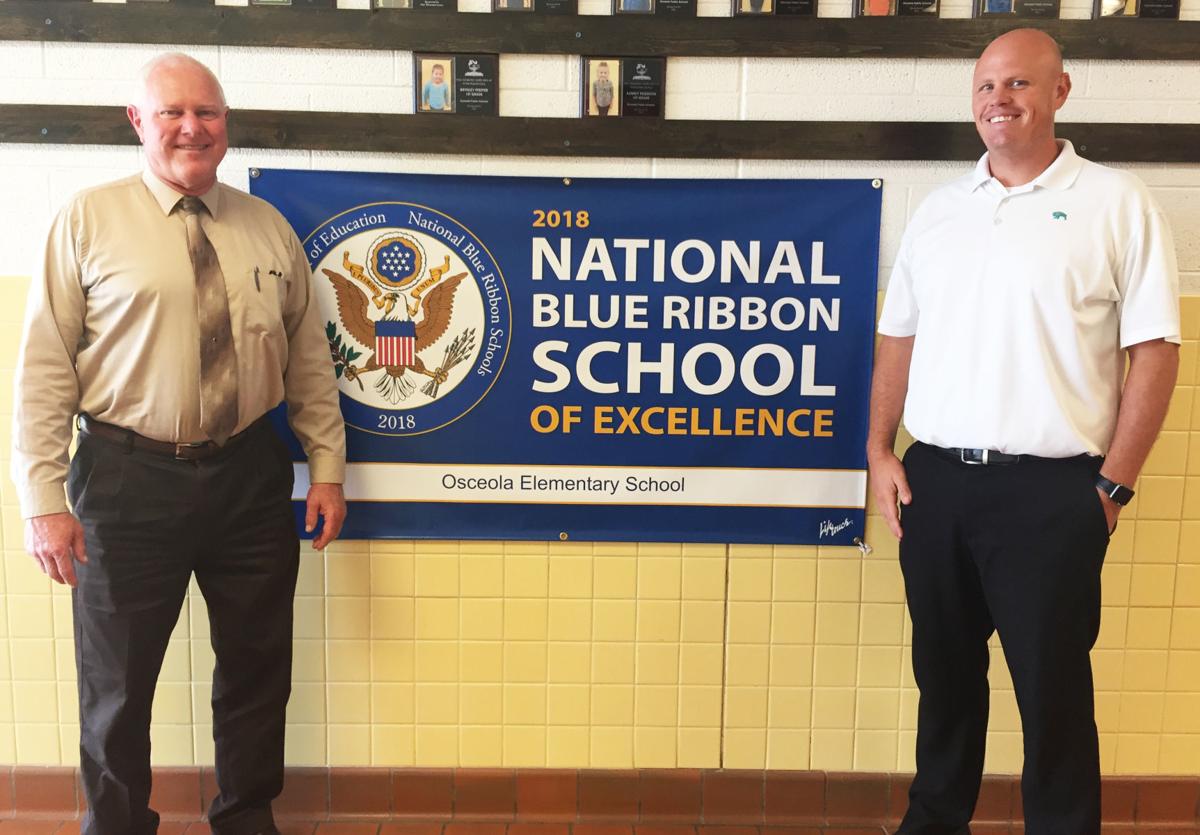 Steve Reinhart, left, superintendent of Osceola Public Schools, and Brett Webster, principal of Jeffrey Elementary School stand Tuesday in front of a sign proclaiming the school as a Blue Ribbon School. The school will break ground Sunday on an expansion of facilities, including new physical educations centers and an expanded lobby for the elementary school. 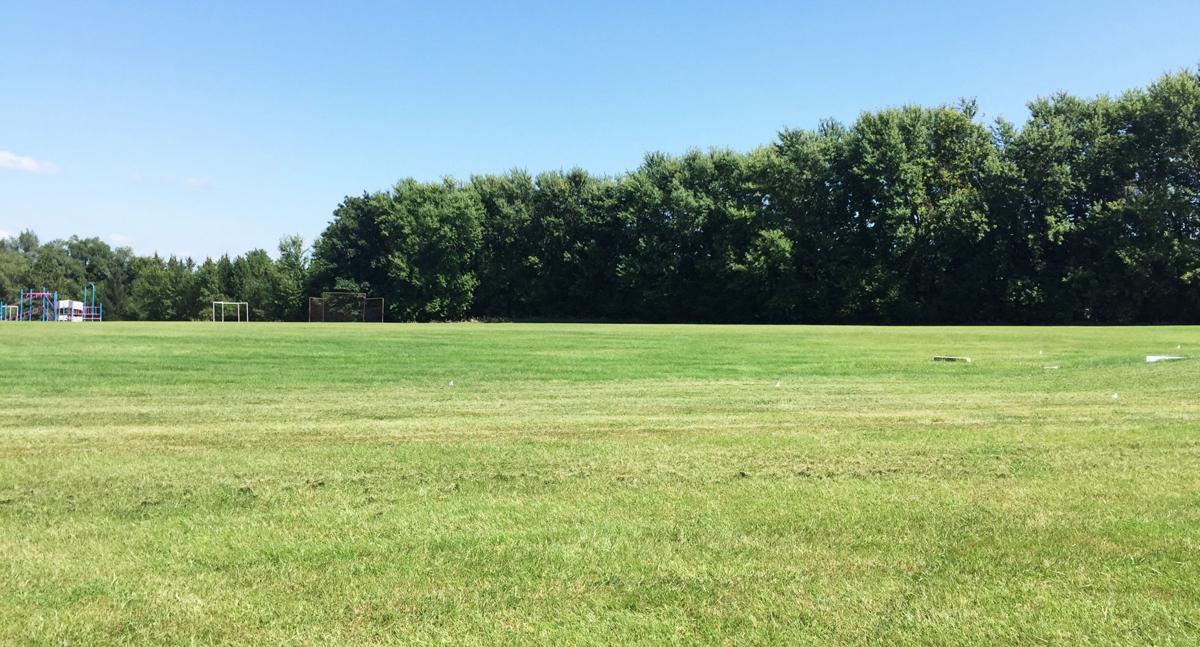 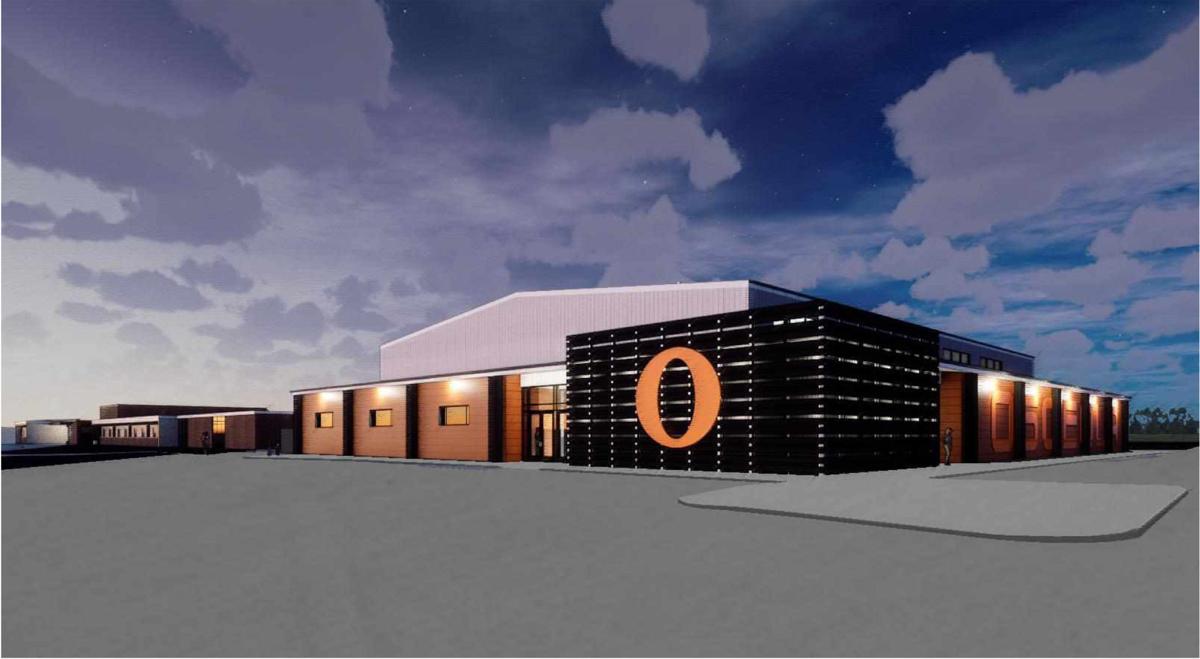 A rendering of what the project will look like upon completion. A parking lot is located outside the building, in addition to expansion of elementary school facilities.

It’s never a good sign when the sewer backs up in your kitchen. But, when that kitchen is your gym and exercise facility, that creates a different set of problems.

“We had an incident when the inspector was here last year,” said Steve Reinhart, superintendent of Osceola Public Schools. “It’s not good when you have an inspector standing in your kitchen.”

Osceola’s elementary school is more than 60 years old and the age of the facilities, along with a lack of space and services, proved to be one of the motivating factors toward an expansion of school facilities. The expansion will make its first baby steps towards completion Sunday when the school hosts a groundbreaking ceremony for the new area.

At the moment, the area is just grass and gravel, freshly mowed on Tuesday with little indication that it will soon be a sparkling addition to current school facilities. The 26,000-square-foot, $7.7-million project will include new areas for dining enjoyment by students and staff alike, with a new kitchen slated to replace the old 60-year-old facility that has seen better days. A larger gym will be added to replace an old gym that was built more for function than comfort.

“We just needed to have more P.E. space,” Reinhart said. “Our gym up at the high school was put in very sparingly. They cut blocks off the top and lowered the ceiling and narrowed it up and made it really small. It’s functional, but in order to hold districts and stuff, which we are in a good location to do that, we could use another facility. What we decided to do was take this sports complex and put a kitchen and use that as a commons area and also our eating area for the new facility.”

There will also be a day care facility added on to that, a much-needed boost for a community that has recently seen some of its day care centers close.

“In the last two or three years, one or two of those (facilities) have shut down,” said Brett Webster, principal of the elementary school. “If we want to continue to attract young families to the school and the community, we’ve got to have places where they can take their kids.”

Having a new commons area and gym means new opportunities, particularly for the young students at Jeffrey Elementary. The new areas are accessible through the school and are conveniently located near the high school, making that particular building easier to access. In addition, the new areas mean that students at the elementary school don’t have to spend their lunch periods in their classrooms on rainy days.

“Right now, when we have indoor recess, if it’s too cold to go outside or it’s raining, they’re just in their classrooms because we don’t have a gym facility at the elementary level that we can use,” Webster said. “In the morning, it’s set up for lunch. It goes breakfast, then lunch and we don’t use it. Then in the afternoon, it’s our P.E. facility. Now with the extra facility, not only are we going to have P.E. in it, but we’re going to be able to have a place to have indoor recess so the kids can actually move and get some of that energy out.”

Inside that gym will also be a running track, something that Reinhart found was well-liked in other communities that he observed.

“I’ve been in several schools in my career where they have walking tracks,” Reinhart said. “The community loves them. They use them a lot and I think it was a big sell for the community.”

There is a safety element to the expansion, in the form of a new entrance to the elementary school. The current entrance is small and cramped, with very little space to hold students before school. They are exposed to the elements and have to walk across the street to reach parents waiting to pick them up, a risky proposition considering the fact that students at the high school are driving home at the same time.

“The biggest safety issue is not having kids picked up here on the street,” Reinhart said. “That’s always been a concern in my 10 years here. We get high school kids leaving and they don’t tend to think very clearly (sometimes). We try to stagger our let out times so that hopefully we get the kids out of here (the elementary school) before the kids get out of the parking lot up there (at the high school). If we can get them off the street and in the parking lot, that’s going to be our goal.”

Both Reinhart and Webster said they're are excited for everything to come to fruition. Initial plans are for the project to be completed early in the next school year, hopefully, done in a manner where no sewers are backed up.

“I’m excited as heck about it,” Reinhart said. “It’s one of those things I never thought in a million years with the economy the way that it is that people would support it the way that they have.”

“To come out and support it the way that they did for their own community in Osceola, it really says a lot that they want this place to be very viable,” Webster said.

The Platte County weed superintendent is receiving a bump in pay during the coming year, putting him on par with several of his peers.

Steve Reinhart, left, superintendent of Osceola Public Schools, and Brett Webster, principal of Jeffrey Elementary School stand Tuesday in front of a sign proclaiming the school as a Blue Ribbon School. The school will break ground Sunday on an expansion of facilities, including new physical educations centers and an expanded lobby for the elementary school.

A rendering of what the project will look like upon completion. A parking lot is located outside the building, in addition to expansion of elementary school facilities.