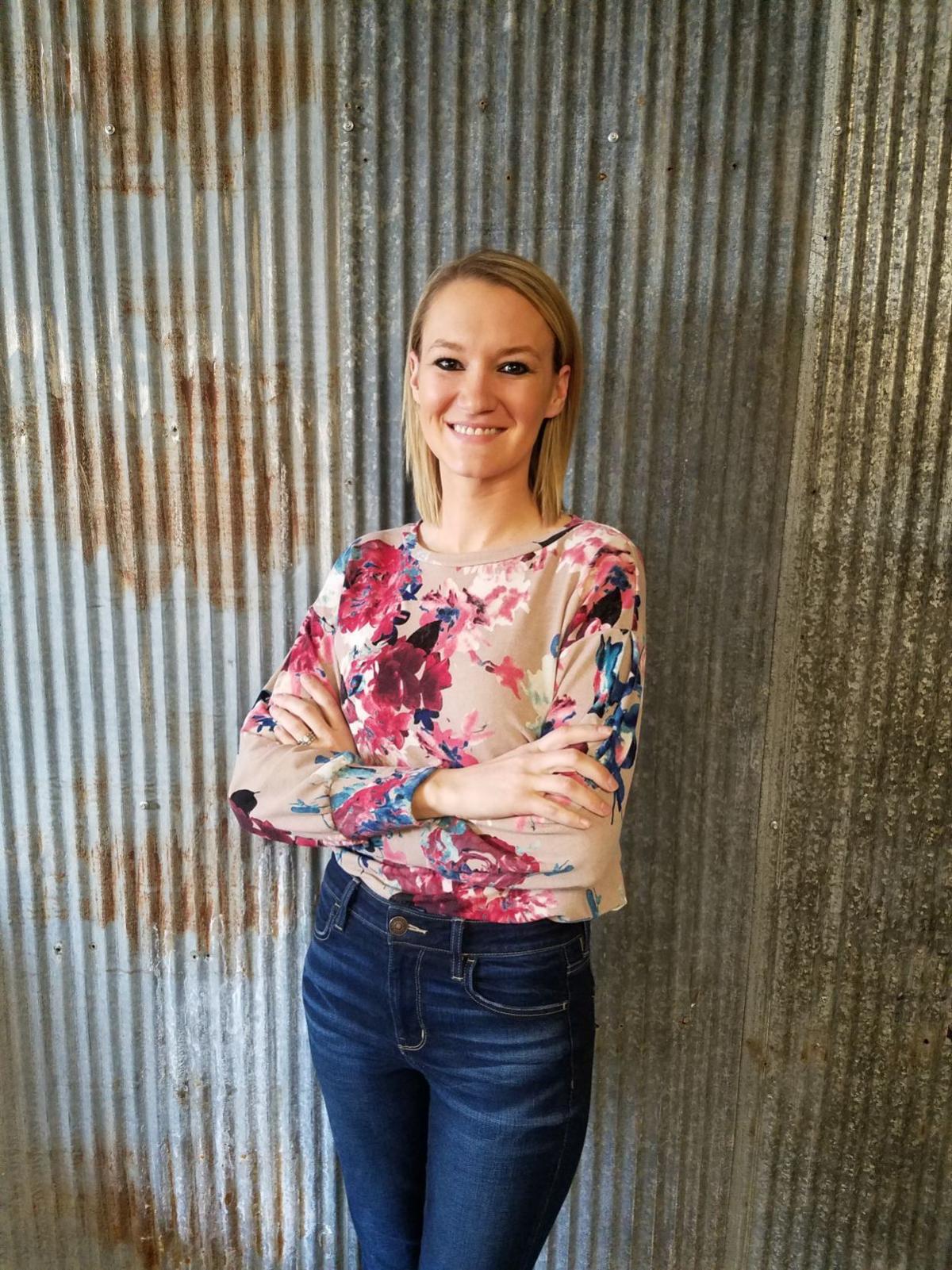 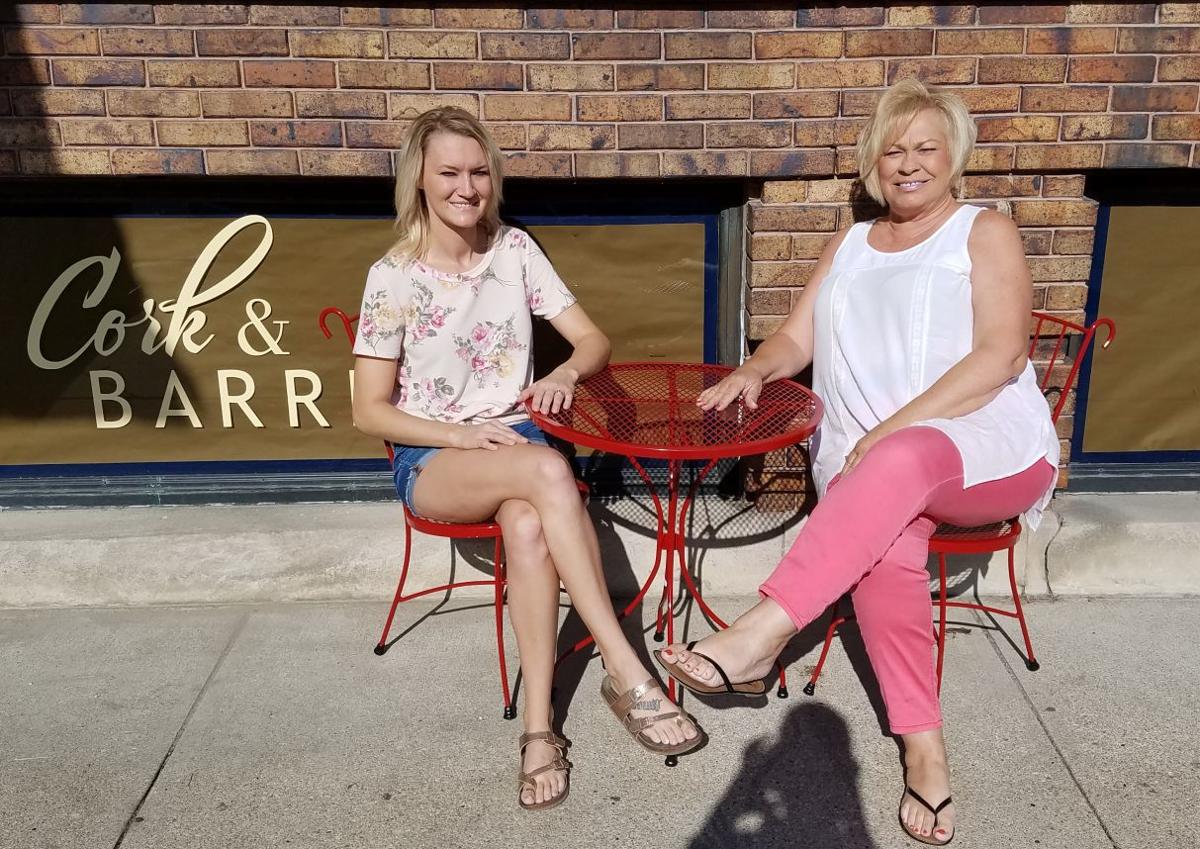 Nicole Saalfeld, owner of Cork & Barrel, and Park Plaza proprietor Beth French on an August 2018 morning pose for a photo outside of the building.

Editor's note: This article originally appeared in the Feb. 8, 2020 publication of The Columbus Telegram.

When Nicole Saalfeld started working as a waitress at Boulevard Lanes/Sahara Lounge/Sax’s Pizza back in the early 2000s, she was terrified.

“I was extremely anti-social, so I was scared to death to even deliver a pizza out to the table,” Saalfeld recalled. “I thought people would be looking at me or would stop to talk to me, and I did not like talking to people.”

Of course, that’s funny to Saalfeld now and many people who know her today. She embodies the spirit of Rosie the Riveter, having become a highly successful entrepreneur of two local businesses, while helping at another, being a community advocate, a wife, and mother of two.

“I’ve seen her develop into a face of Columbus. I’m very proud,” said Boulevard Lanes/Sahara Lounge owner Jeff Thiele, who hired Saalfeld and has seen her evolve from a quiet teen into a community leader. “She’s a success No. 1 because she’s a good person, she cares about everyone. She’s just a good one.”

GROWING UP IN COLUMBUS

Saalfeld grew up on a rural acreage just north of Columbus with her parents and three younger sisters. She was exposed to hard work early on in life as her father was an entrepreneur. She described her father as a “jack-of-all-trades,” noting he was an electrician and welder, among other things. He now lives in Minnesota and continues to run his highly successful business, Frauendorfer Contracting, which offers filtration, building and repair services to livestock farmers.

“I saw how hard he worked and what he did to provide for the family” Saalfeld said.

Although a shy person by nature, it didn’t stop Saalfeld from going for things she wanted throughout her childhood. She worked part-time jobs after school while also participating in dance, cheerleading, band and cross country. That drive, she said, was inspired by watching her father run his business.

“I did enjoy working, so I just made sure I was always doing something I loved,” she said.

After graduating from Scotus Central Catholic High School in 2004, Saalfeld elected to go to Central Community-College to pursue her interest in becoming an orthodontist. She took numerous necessary science classes to earn her degree, but quickly realized she no longer wanted to pursue that profession. As a result, she got an associate degree in arts because it was admittedly the easiest way to earning the degree based on the classes she had taken.

Saalfeld then moved to Omaha for a few years and took some courses at Metropolitan Community College, but ironically, a conversation with her younger sister brought her back to Columbus.

Saalfeld and her sister, Amy Soulliere, one afternoon in 2011 got to talking about Plato’s Closet, a national retailer that buys and sells gently used clothing for teens and adults. They saw an opportunity to take that concept and put their own spin on it by opening up their own local resale store. Fabulous Forever, 2508 13th St., opened its doors Feb. 2, 2012, and has taken off. Its success has resulted in the store expanding from just offering women’s clothing to now kids' and men’s items.

“We have lots of people coming from other towns,” she said, citing places like Norfolk, David City, Shelby, Humphrey and Fremont. “Ironically, it’s the places a lot of Columbus people go and people from those towns are coming to us. I don’t think people in Columbus realize just how much this town has to offer.”

In 2018, Saalfeld opened up her own bar, Cork & Barrel, in the lower level of the Park Plaza building at 1354 27th Ave. in downtown Columbus. The spot offers a variety of wines, domestic and craft beers, as well as its signature cocktails and some food items.

The response to the venue has been tremendous, she said. Saalfeld had to deal with a flood after a water service line broke back in November, but persevered through it.

“In the end, when you create something you can be proud of and people enjoy, that’s a whole different level,” she said. “It’s a good feeling.”

Although Saalfeld has two successful businesses of her own and continues to help out with the marketing and communications at Boulevard Lanes/Sahara Lounge, work is hardly what defines her. She relishes spending time with her husband, Vince (owner of Saalfeld Trucking) and their two children: 11-year-old son Jack, and 4-year-old daughter Paisley.

“It’s pretty awesome,” she said of being a mom. “I’m hoping to teach them what I learned from my dad –just about hard work.”

Her daughter has taken a love for business, as she mentioned how Paisley has become a bit of a celebrity among the clientele of all the places she works. Paisley, she noted, likes to do dishes and mingle with people.

Saalfeld is admittedly a little pink-obsessed. Besides her pink pickup truck (she had a pink Ford Mustang prior to that), she has a pink trailer, four wheeler, lawn mower, toolbox, tools, and enjoys spending time in Cork & Barrel’s room that is a pink haven. Even Fabulous Forever is a noticeably pink building in the downtown district, though she assured the building just happened to be that color prior to the store moving there. It was a happy coincidence, she noted.

“I think for me, it’s just a super happy color. It’s fun, bright and friendly,” Saalfeld said of her favorite color. “I’ve just always been drawn to pink anything. If it doesn’t come in pink, I make it pink. Now, it just feels like it is part of me.”

Although Saalfeld is passionate about her family and being successful in business, she’s also committed to doing everything she can to help Columbus grow. She acknowledged it can be frustrating to come across residents on social media making negative comments about her hometown, especially when there are many great things Columbus has to offer and many people doing so much to help it.

“For me, Columbus is a great community,” she said. “There are lots of awesome leaders, positive people and great businesses. I’ve gained so many great friends and colleagues.”

Saalfeld is of the mindset that people have to take the initiative to push the community forward rather than waiting on others to do so. With that in mind, she does her best to get involved. She’s part of the 13th Street Again movement, a collection of business owners along 13th Street who are working collectively to help promote their stores and the downtown area for the greater good.

“We’re really all in it together,” she said. “It’s definitely gaining traction. We all know it takes time, dedication and perseverance to make things happen.”

Saalfeld also is volunteering her time to organize and run the bar committee for Cattlemen’s Ball that will take place at Scott and Pat Mueller’s acreage north of Columbus. The Cattlemen’s Ball of Nebraska is a 501(c)(3) charity whose mission is to raise money for cancer research. Ninety percent of the profits benefit the Fred & Pamela Buffett Cancer Center in Omaha, with 10% donated back to local communities’ health and wellness programs.

The June event is expected to bring several thousand people to town and be a showcase for Columbus. Saalfeld said she’ll be running six, possibly seven, bars at the event that weekend.

“The committee for this ball is amazing, so I’m honored to be asked to be part of it,” Saalfeld said. “It’s going to be a huge event for the community.”

When Saalfeld reflects back on where’s she has come, it’s a surreal feeling. Her kids are growing, Fabulous Forever just celebrated its eighth anniversary and Cork & Barrel also appears to have a bright future.

Thiele reiterated he’s proud of who Saalfeld has become and what she has accomplished.

“She’s not a procrastinator. She’s a finisher,” he said. “She gets things done.”

She credited Thiele as a mentor.

“Jeff has been an extremely important part of my life for sure as an entrepreneur but also on a personal level. I learned a lot from him,” she said. “I definitely respect how he ran his business. People really respect him in the community and I really try to mold how I am based on how I saw him and what I saw it do for his business.”

Saalfeld said Thiele and her father inspired her to work hard and not be afraid to go after her dreams.

“Collectively, those two have been the most influential in shaping who I am today,” she said. “They showed me more about myself than I knew I had in me.”

But, she stressed she’s proud of herself for rolling up her sleeves and being unafraid to get things done. It’s that Rosie the Riveter spirit that is part of her DNA. She takes pride in being an entrepreneur and more specifically, a female entrepreneur.

“Not that I doubt myself. Being strong and confident is key to being a successful person,” Saalfeld said. “Female entrepreneurs can do it, too.”

Paisley Cogsdill snored in her sleep but was perfectly healthy, relatives said. But her heart suddenly stopped during an operation to remove her tonsils.

Residents will soon have another chance to hear about plans for a potential new Columbus Public Library building and a children’s museum.

It takes time to build a road; however, some take more time than others.

Nicole Saalfeld, owner of Cork & Barrel, and Park Plaza proprietor Beth French on an August 2018 morning pose for a photo outside of the building.