The Nebraska Department of Environment and Energy sought AltEn's compliance with the state's environmental protection and solid waste management laws for years, but to no avail.

On Monday, after the troubled ethanol plant missed a March 1 deadline to properly dispose of tens of thousands of tons of pesticide-contaminated byproduct from its facility near Mead, the state sued the company to force it to clean up the multiple environmental violations that go back years.

Ethanol plant near Mead ordered to shut down

The production in turn created contaminated solid and liquid waste that was stored improperly at the facility, or applied to agricultural land in the area.

Nebraska Attorney General Doug Peterson said the scale of the complaint against the Kansas-incorporated company was more akin to an antitrust lawsuit filed against a big-tech firm than other action his office has taken to enforce the state's environmental laws.

"What's driving this is just a poorly, poorly run corporation that failed to recognize the authority of the state and comply with our environmental standards," Peterson said. "That's why it's so extensive."

Peterson said the state will seek an injunction from the court against AltEn to clean up the site, as well as to recoup costs accrued by the state and to enforce penalties assessed against it. 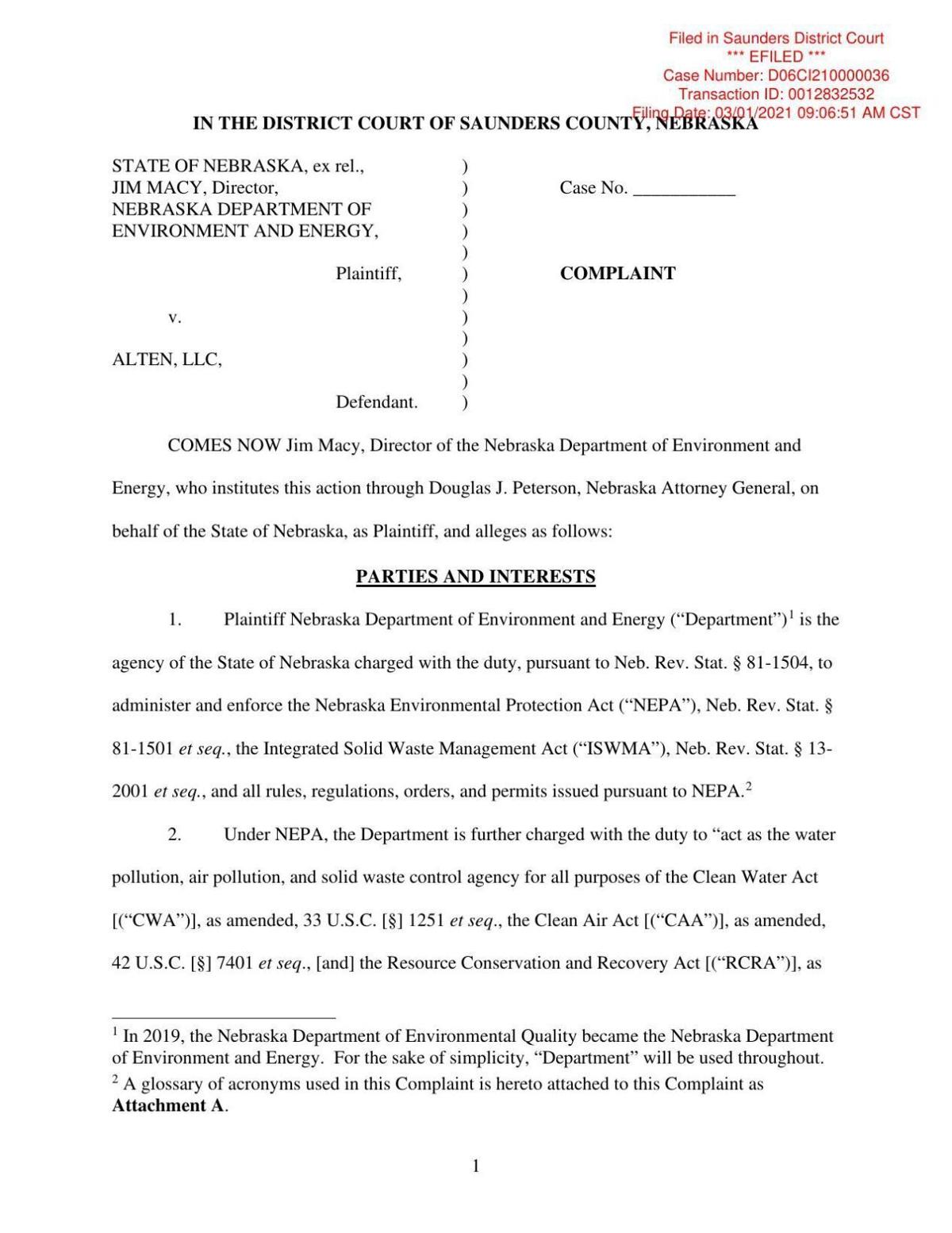 At Gov. Pete Ricketts' coronavirus press briefing Monday morning, Jim Macy, director of the Department of Environment and Energy, said state regulators had attempted to gain compliance from AltEn through the administrative process used by the department.

Speaking with members of the Legislature's Natural Resources Committee last week, Macy said the department had conducted nearly 80 site visits to AltEn since the facility restarted in January 2015, with roughly half of those inspections occurring this year.

During the meeting with senators, Macy declined to say if the department had referred AltEn to the attorney general for enforcement. On Monday, after the complaint had been filed, Macy said AltEn was "going to be held accountable for their mismanagement."

"We've heard your concerns," he said, "and we take those seriously."

Residents of Mead and the surrounding area have voiced concerns about AltEn for years, focusing on an intense odor coming from the plant that some neighbors said had made them sick. Others reported bee colonies near the plant being repeatedly killed, as well as wildlife and pets becoming gravely ill.

According to the state's complaint filed with the Saunders County District Court on Monday, problems at the plant began even before AltEn restarted operations in January 2015. AltEn acquired the facility from E3 Biofuels in a bankruptcy sale.

A permit application filed by AltEn with the Department of Environment and Energy in February 2013 indicated "grain (mainly corn) will continue to be the primary raw material" used to produce ethanol.

The department learned in 2015 AltEn was using discarded treated seed corn as a feedstock, but "did not know until 2018 that the byproducts from AltEn's ethanol production could contain measurable residues of pesticides."

Once that discovery was made, the Nebraska Department of Agriculture in May 2019 ordered AltEn to cease applying the solid byproduct from its ethanol production as a soil conditioner, and the environment department issued the company a notice of violation that it was operating a solid waste management facility without a permit.

AltEn told the department on several occasions it did not consider the ethanol byproduct a solid waste, according to the complaint, and did not provide a plan to dispose of the material as it continued to produce ethanol.

According to records maintained by the Department of Revenue, which tracks the amount of fuel that leaves the state's two dozen ethanol facilities, AltEn continued to operate through January 2021, producing at least 48.6 million gallons of ethanol over the last five years.

From that production, the company has stockpiled approximately 84,000 tons of the waste material, the complaint alleges.

The ethanol plant also violated numerous environmental laws designed to protect the state's water resources, according to the complaint, including a failure to maintain badly damaged lagoons on the site, applying lagoon wastewater to land without a permit, and failing to provide the state plans for managing contamination in surface water and groundwater, as well as to control stormwater runoff.

Earlier this year, the department issued an emergency complaint against AltEn after its lagoons were determined to be filled over the capacity allowed by law, and ordered the plant to file a plan detailing how it would dispose of wastewater in the lagoons by March 10.

The department says AltEn had shut down its operations by Feb. 10 and remains idle.

The ethanol facility, which has not responded to the complaint, could face fines of $10,000 per day for each of the 18 causes of action listed in the lawsuit.

On Monday, Ricketts called AltEn "very terribly managed," and said the company did not represent the ethanol industry in Nebraska, which he called important to the state's economy.

"We take protecting the environment very seriously," Ricketts said. "If you're not going to work with us, we're going to take strong measures against you." 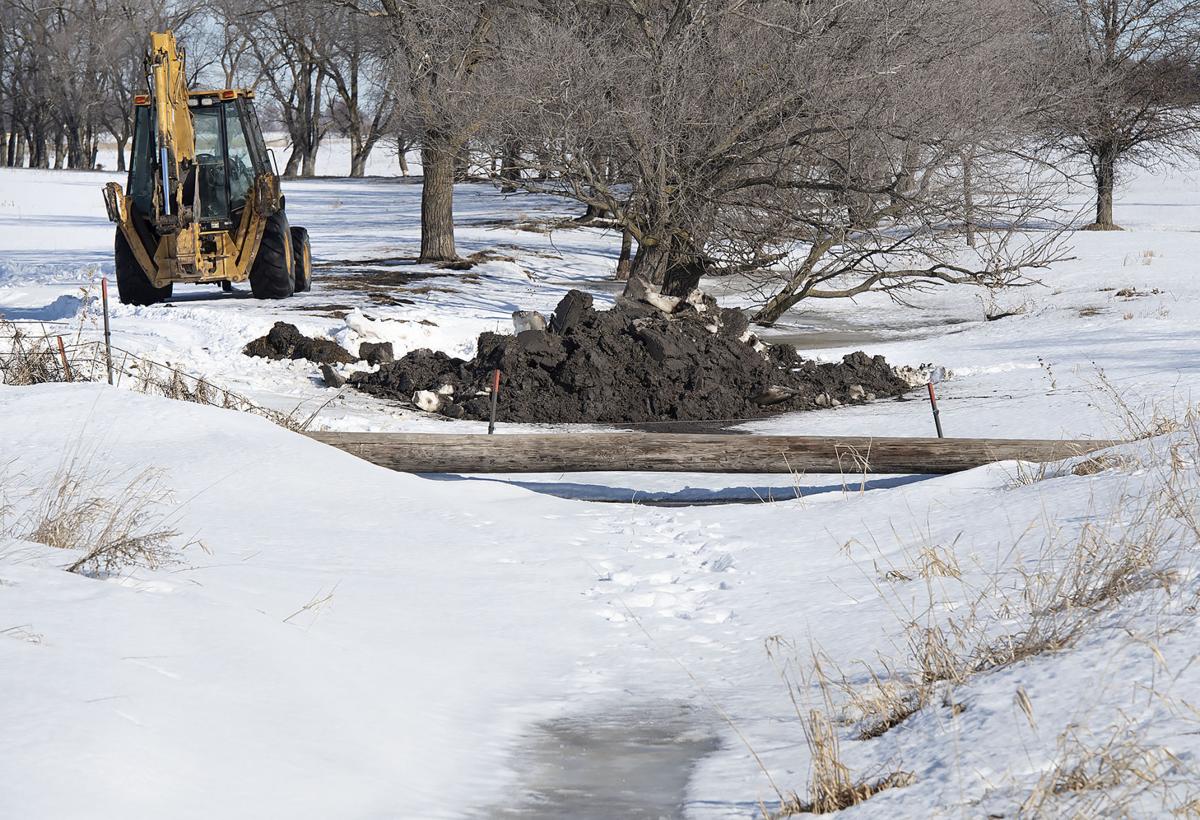 An earthen dam blocks the flow of waste material in a waterway southeast of AltEn Ethanol last week in Saunders County.