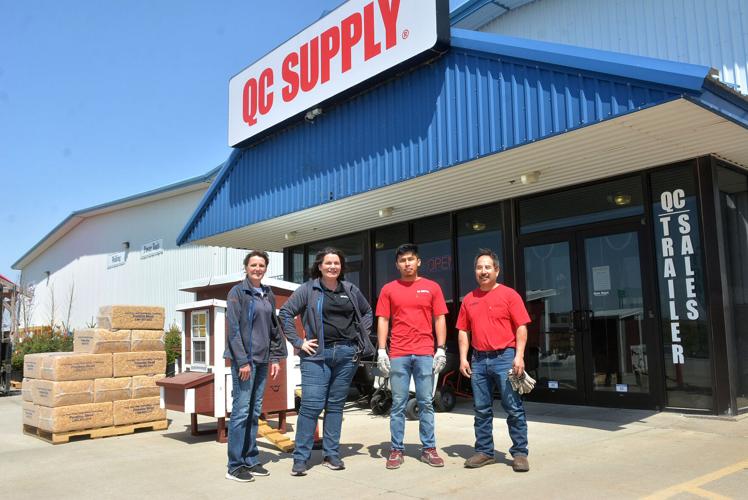 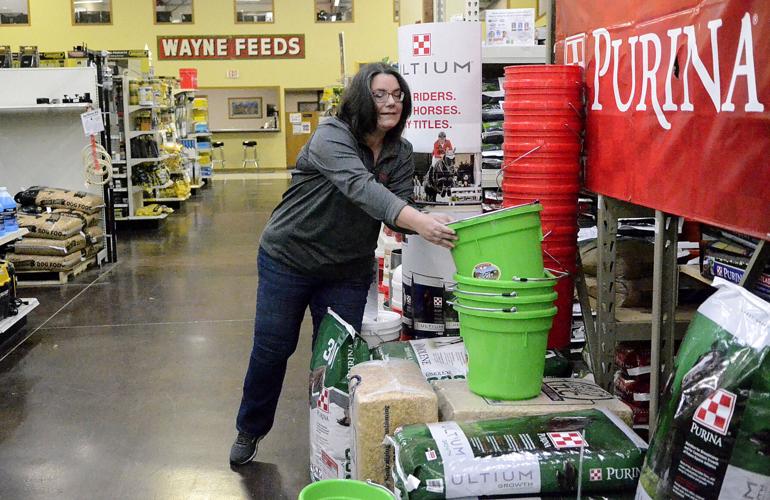 QC Supply employee Valerie Ehernberger stacks buckets in front of a display inside the store in Schuyler. 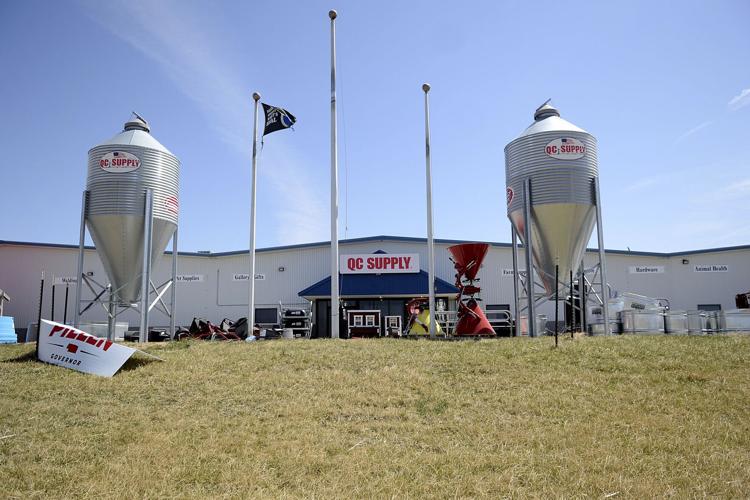 QC Supply in Schuyler is the company's main headquarters. Once operating out of Lonnie Kitt's garage, QC Supply has grown to 27 stores nationwide. 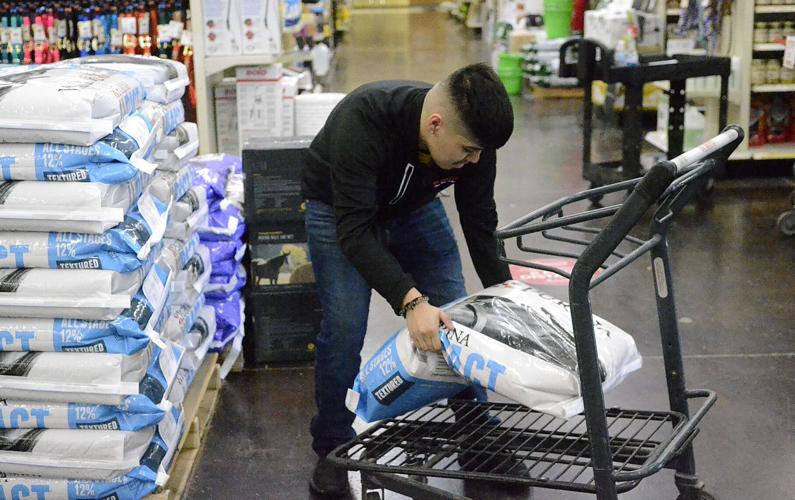 Allen Millan loads a cart with bags of horse food inside QC Supply in Schuyler. 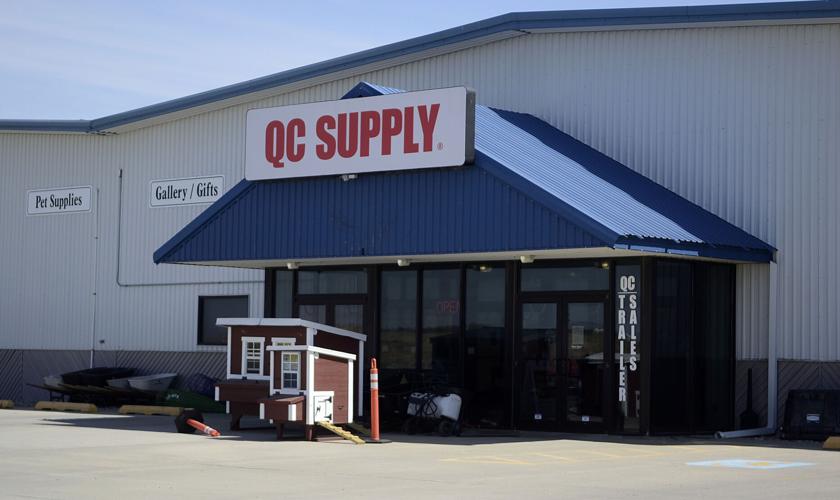 Mike Slegl was born and raised in Schuyler. One of his high school coaches and industrial arts teacher was Lonnie Kitt, the original owner of QC Supply. Little did he know, this relationship would lead him to his future career.

Kitt started QC Supply in 1982 and eight years later, he had a conversation with Slegl about eventually looking for a sales person.

After gathering enough experience and a better understanding of the industry, Slegl joined QC Supply in 1994. Now the vice president of sales, Slegl was grateful to learn from Wilke and Pillen.

"I've seen tons of ebbs and flows as we've expanded, continued to add staff and have had a chance to travel throughout the country supporting the industry. The diversity of what I've been able to do here, helped with the catalog production, kick-started the site on e-commerce," Slegl said.

"I've had a chance to do procurement and today, I lead our sales organization both internally and externally throughout the United States. It's been a great path."

In 1982, Kitt was operating the store out of his garage. He focused on the livestock industry, specifically the swine and poultry world, dairy, beef and cattle.

In 1998, QC Supply built and moved into a bigger facility in Schuyler to support the growth of the company.

"I personally was the first sales person hired in 1994," Slegl said. "We maybe had eight to 10 employees."

Today, Slegl said, the company has 280 employees and the company has 27 stores nationwide. In addition, they print a 400-page catalog and have an e-commerce website that offers about 25,000 skews for the products they offer.

"Very much supporting the American family farmer across the board. All scopes. Small to large," Slegl said. "Even beyond that, much of our products cross over. We have some of the industry-leading experts sitting here that understand how heating equipment works, ventilation equipment and just anything to support the sustainability of livestock production."

QC Supply has become a one-stop shop for all farmers, offering products and staff who help farmers identify what products best suit their needs.

"We have a 100,000 square-foot footprint here in Schuyler... . Whether it's the largest of poultry farms to the backyard person who has one or two chickens... a couple of pigs to major facilities, we offer everything from A to Z when it comes to supporting anything you do on your farm," Slegl said.

Products offered include, but are not limited to feed, buckets to tote things around, fans and heaters.

"Not only do we have the vast majority of that stuff sitting in one spot, we also have a staff that is highly technically savvied on understanding how each and every one of these products actually work," he said.

Should a customer come in that doesn't know what they want, Slegl said the staff has a high level of experience and can guide them in what they should be using. He empahaized that the QC Supply team is there to help "the American family farmer make the right choices to produce whatever is in front of them."

Ann Wachal works inside sales at QC Supply. She's been working there for 16 years. Wachal said farmers are on a schedule and with the store offering so many products, it provides convenience for them.

"They can come in and get their disinfectant, their bleach," Wachal said. "If they need gloves, boots, they can get (those) and then they can get whatever supplies they need to fix their chicken barns or hog burns, the feed bins, the feed systems, whatever."

Slegl said what makes Schuyler a great place for QC Supply is the people. The staff features a lot of employees with tenure and experience. He said many people look at what they do in a day's time as a job, but Slegl said he believes the culture has made it a career opportunity for many on his team.

"We have a dedication that our staff really believes they make a difference in the livelihood of many, not just within the company. If we can provide the product that people can use to help their own livelihood, there's a level of satisfaction when you get home every day saying, 'I helped a lot of people,'" he said.

QC Supply does its part to help the Schuyler community. They support programs like Future Farmers of America, 4-H and blood drives through the American Red Cross.

"We do like to support everything from the local schools, donate and contribute to many of the causes that are agricultural or farm-focused, but also community-focused," Slegl said. "We want to be a good patron to the communities we're in."

Slegl said he's most proud of the longevity of the company's footprint. He said the agricultural market is not easy as he's seen a lot of groups come and go. Despite the economic and weather challenges, Slegl said, QC Supply is committed to working with the American family farmer.

As for the future of the company, Slegl is optimistic. He said QC Supply is one of the leading edge companies when it comes to product advancements and technology.

Slegl acknowledged that given the challenges with the workforce, they have to do more with less. However, there's one constant that QC Supply will always be able to rely on.

"The world will always have to eat. If you look at the data provided, our population at some point in the time in the next 30-40 years will exceed our worldwide capacity to grow food to sustain everybody's appetite," Slegl said. "There's logistics and all the noise that goes on in the world today with COVID, the political arena and everything. One common denominator is the balance of the world needs to eat.

"That's what we're dedicated towards and supporting the American family farmer and worldwide because we do export as well. Becoming more efficient in creating a sustainable food source for the long term, so QC Supply has a very, very bright future that's extremely sustainable."

Sam Ficarro is a reporter with The Columbus Telegram. Reach him via email at sam.ficarro@lee.net.

QC Supply employee Valerie Ehernberger stacks buckets in front of a display inside the store in Schuyler.

QC Supply in Schuyler is the company's main headquarters. Once operating out of Lonnie Kitt's garage, QC Supply has grown to 27 stores nationwide.

Allen Millan loads a cart with bags of horse food inside QC Supply in Schuyler.