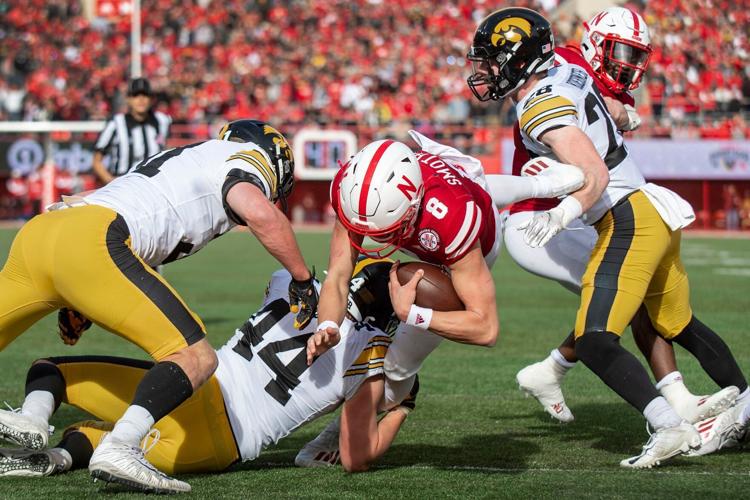 Nebraska quarterback Logan Smothers (8) dives into the end zone for the Huskers first touchdown against Iowa in the first quarter Nov. 26 at Memorial Stadium. 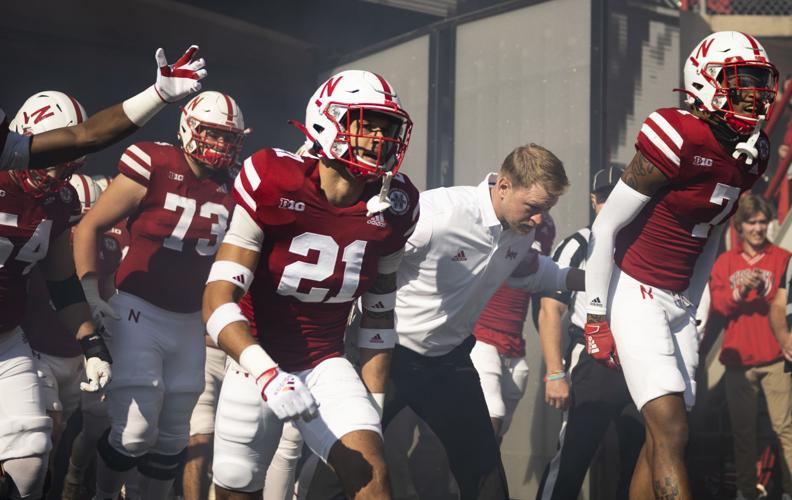 Nebraska coach Scott Frost runs onto the field with the team before a game against Purdue on Saturday at Memorial Stadium. 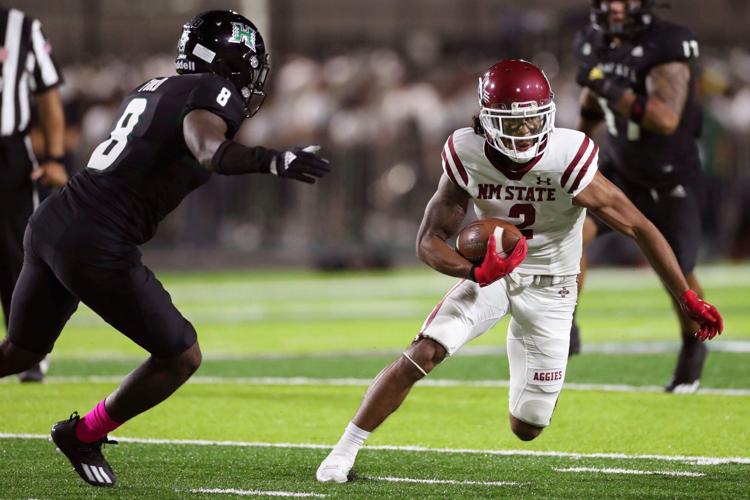 New Mexico State wide receiver Isaiah Garcia-Castaneda gets by Hawaii defensive back Eugene Ford in a game on Oct. 23 in Honolulu. Garcia-Castaneda is joining the Huskers for the 2022 season.

Rosters and coaching staffs are in flux all across college football, and Nebraska is no different as Christmas arrives and 2022 moves squarely into view.

Half the full-time coaching staff is gone, too, with four offensive staffers fired in November and Tony Tuioti this week leaving for Oregon. Three replacements have been hired and two spots remain open.

With all of that movement and still more to come, let’s take a look at where each position group stands and what would be waiting under the tree for each if Santa decided to dish out some Christmas cheer to the Huskers.

Wish list: One of the biggest offseason questions remaining is who the Huskers will find in the transfer portal to add to the quarterback competition. NU likes what it has in Logan Smothers, Heinrich Haarberg and Torres, but that’s a young, inexperienced group. Whipple and coach Scott Frost would undoubtedly love to add a veteran to the room, too. Can they find one?

Here’s a bonus wish list while we’re at it: That at least one of the three young guys takes quickly to Whipple’s teachings. If Haarberg, who Frost recently described as “supremely talented,” makes a big jump from Year 1 to Year 2, that could also be quite intriguing going into the summer.

Movement: Sevion Morrison and Marvin Scott transferred out around the end of the regular season and Nebraska signed Emmett Johnson. The running backs do not currently have a full-time coach.

Wish list: This one is pretty straight forward. Now that there are two openings on the coaching staff, Frost has an opportunity to address both special teams and running backs and can look around the country for a coach to oversee a young group that has talent but also question marks behind Rahmir Johnson. If you want to put a big-ticket item on your running backs wish list, how about four-star 2022 back TreVonte’ Citizen (Lake Charles, Louisiana)? It’s probably a long shot that he’ll visit NU in January, but Nebraska will try to get him to campus.

Wish list: The Huskers certainly would entertain the idea of adding another transfer (or 2022 player) if a true difference-maker is out there for the taking, but for this group, the best thing that can happen in the 2022 season is that Omar Manning, Zavier Betts and company flourish under Joseph’s tutelage. He’s already met with those two in particular, and the group as a whole. Garcia-Castaneda will compete for Toure’s spot and several young players have a chance to step into bigger roles, too.

Movement: Record-setting Aurora native Austin Allen is off to the NFL.

Wish list: This is among the more stable groups on the roster. The wish list is that Sean Beckton keeps it going into 2022 with Travis Vokolek, Thomas Fidone, Chance Brewington and others. In particular, a big jump and healthy offseason from Fidone could put the Huskers in great position to again have a deep, productive tight end group for years into the future.

Wish list: Nebraska is in the market for at least one more transfer offensive lineman. An impact addition at either tackle or on the interior would look mighty good under the tree. Let’s toss in a healthy recovery for left tackle Teddy Prochazka while we’re at it. Then, it will be up to Raiola to try to develop a group that struggled at tackle throughout 2021 and has to replace its best player in Jurgens. It’s going to be a busy, critical offseason for a young group with a new coach.

Movement: Ben Stille graduated and Damion Daniels is off to the NFL. NU might lose Deontre Thomas, too. The Huskers also lost defensive line coach Tuioti, who left for Oregon.

Wish list: A difference-maker from the portal certainly wouldn’t hurt, but this group one way or another is going to be led by Casey Rogers and Ty Robinson. If NU plays more 4-3 in 2022 (as it did this fall), then it will be up to guys like Nash Hutmacher and Jordon Riley (plus maybe some of the Huskers’ younger players like Marquis Black, Mosai Newsom and Jailen Weaver) to step into roles rather than needing one true nose tackle to play snap in and snap out. It would be a simple transition, too, for Mike Dawson to move back over to the DL room from coaching outside linebackers.

Movement: JoJo Domann is off to the NFL and Jackson Hannah transferred. NU signed Ernest Hausmann and Jake Appleget, and Gage Stenger could end up a linebacker, too.

Domann is a big loss, of course, but no position group on Nebraska’s roster has the continuity that both rooms of linebackers can boast so far. The Huskers have a blend of experience, production and young talent both inside and outside. The only ripple impact will be if Dawson moves back to the DL with Tuioti heading to Oregon.

Wish list: Healthy offseasons for the guys that logged heavy snaps and jumps from young players like Randolph Kpai, Mikai Gbayor inside and Jimari Butler and Blaise Gunnerson outside would look pretty good. Here’s a gift suggestion that can be returned if it doesn’t fit quite right: Would moving Chris Kolarevic to Domann’s nickel spot allow him to maximize all that athleticism and not have quite so much responsibility in the box? It’s doable, especially if Will Honas gets an extra year of eligibility or one of the young ILBs proves ready for a rotational spot alongside Luke Reimer and Nick Henrich.

Movement: Marquel Dismuke and Deontai Williams are out of eligibility, Cam Taylor-Britt is off to the NFL and Malik Williams transferred. NU signed a big DB class in corners Jaeden Gould and Malcolm Hartzog and safeties Jalil Martin and DeShon Singleton. The Huskers also landed Arizona State transfer Tommi Hill.

Wish list: Replacing three starters won’t be easy, but the best thing for Travis Fisher’s group at this point is competition. Hill, Singleton and Gould are all potential early playing time candidates — and Martin or Hartzog could surprise. Quinton Newsome returns as a starter at corner and Myles Farmer played a lot. Fisher trusts Braxton Clark at corner, too. Are Marques Buford Jr., Noa Pola-Gates and Isaac Gifford ready for extensive playing time? Or can some newcomers swoop in and earn snaps? It’s going to be a fun group to watch this spring.

Wish list: Essentially, that the personnel overhaul works. That’s the long and short of it. Buschini and Bleekrode are two of the most important additions NU will make this offseason. Who will coach them? Perhaps Bill Busch, who spent 2021 as an analyst. Perhaps somebody else. That should be sorted out in the next couple of weeks. Then, the next step becomes shoring up the coverage, protection and return units. Come to think of it, that would be a nice surprise gift under the tree, too: A dynamic return man, whether it’s Hartzog, one of the two freshman receivers or somebody else.

The Broken Bow Police Department found Angie Miller dead at her house around 1:45 a.m. Friday, the State Patrol said. Her husband was found dead in a pasture a few hours later.

One man is hoping that the story of his mom and dog being attacked by a loose dog in David City will help bring awareness to the issue.

Jim Pillen, a Columbus pork producer and NU regent armed with strong support from Gov. Pete Ricketts and most of the state's Republican establishment, will face Democrat Carol Blood in the general election.

After times and marks were all accounted for at four Class A district meets across Nebraska on Tuesday, Columbus High earned a total of 16 qua…

Nebraska quarterback Logan Smothers (8) dives into the end zone for the Huskers first touchdown against Iowa in the first quarter Nov. 26 at Memorial Stadium.

Nebraska coach Scott Frost runs onto the field with the team before a game against Purdue on Saturday at Memorial Stadium.

New Mexico State wide receiver Isaiah Garcia-Castaneda gets by Hawaii defensive back Eugene Ford in a game on Oct. 23 in Honolulu. Garcia-Castaneda is joining the Huskers for the 2022 season.