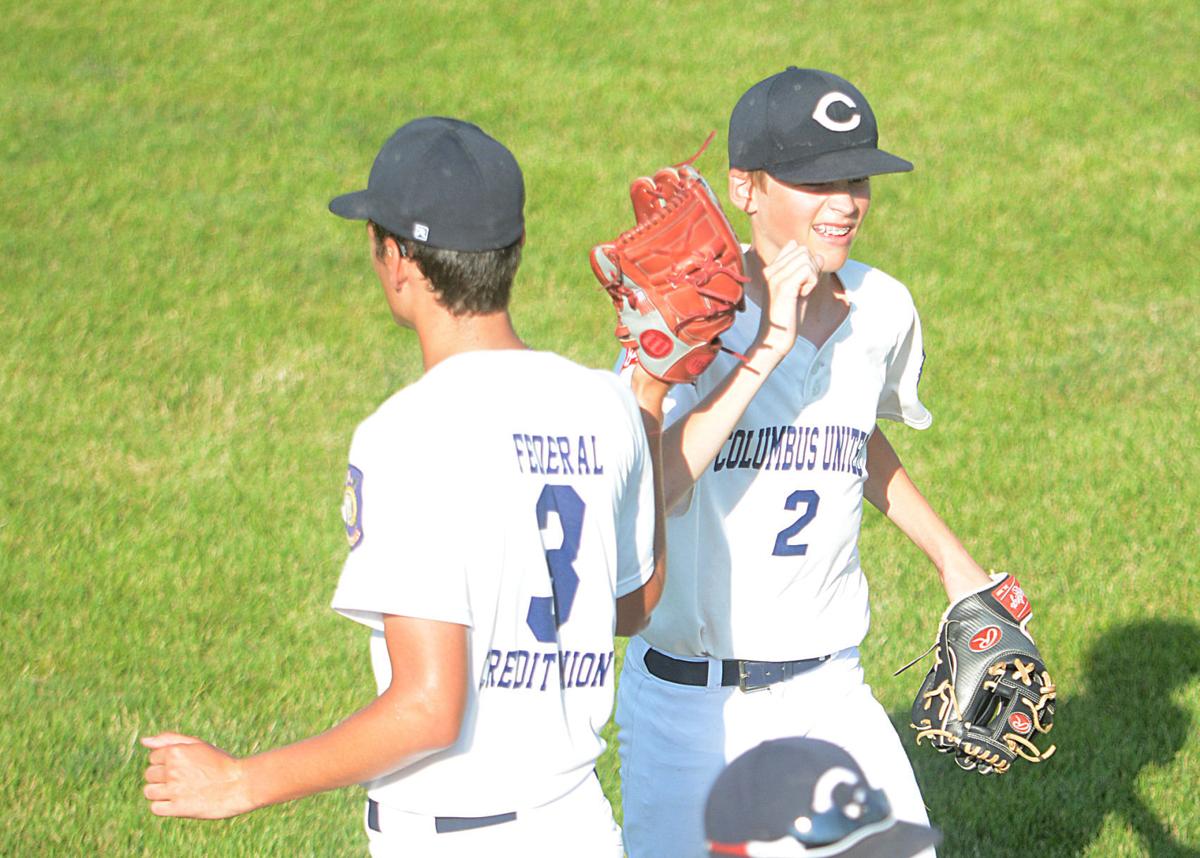 Ryan Eickhoff, right, is greeted near the dugout by teammate Tadan Bell after Eickhoff made a tumbling catch in shallow center during Tuesday's Junior Blues Legion game against Lincoln Pius. 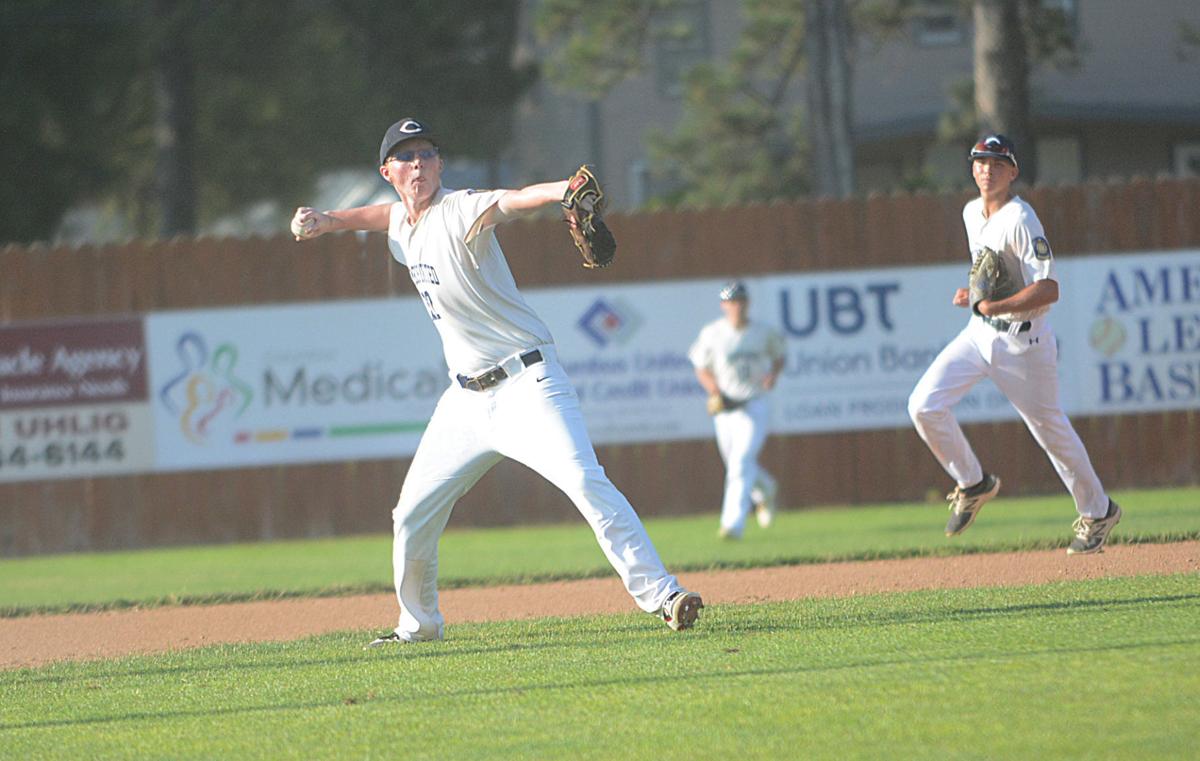 Junior Blues third baseman Shon Brockhaus loads up for a throw across the diamond in Tuesday's game. 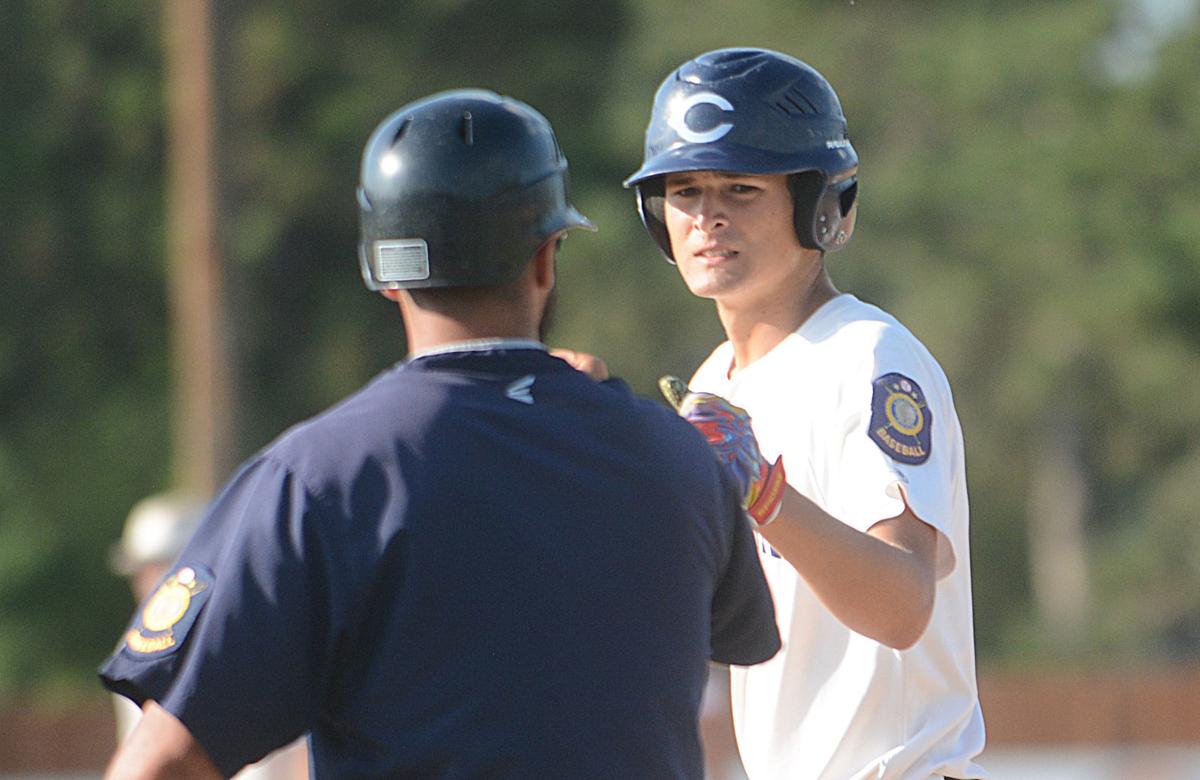 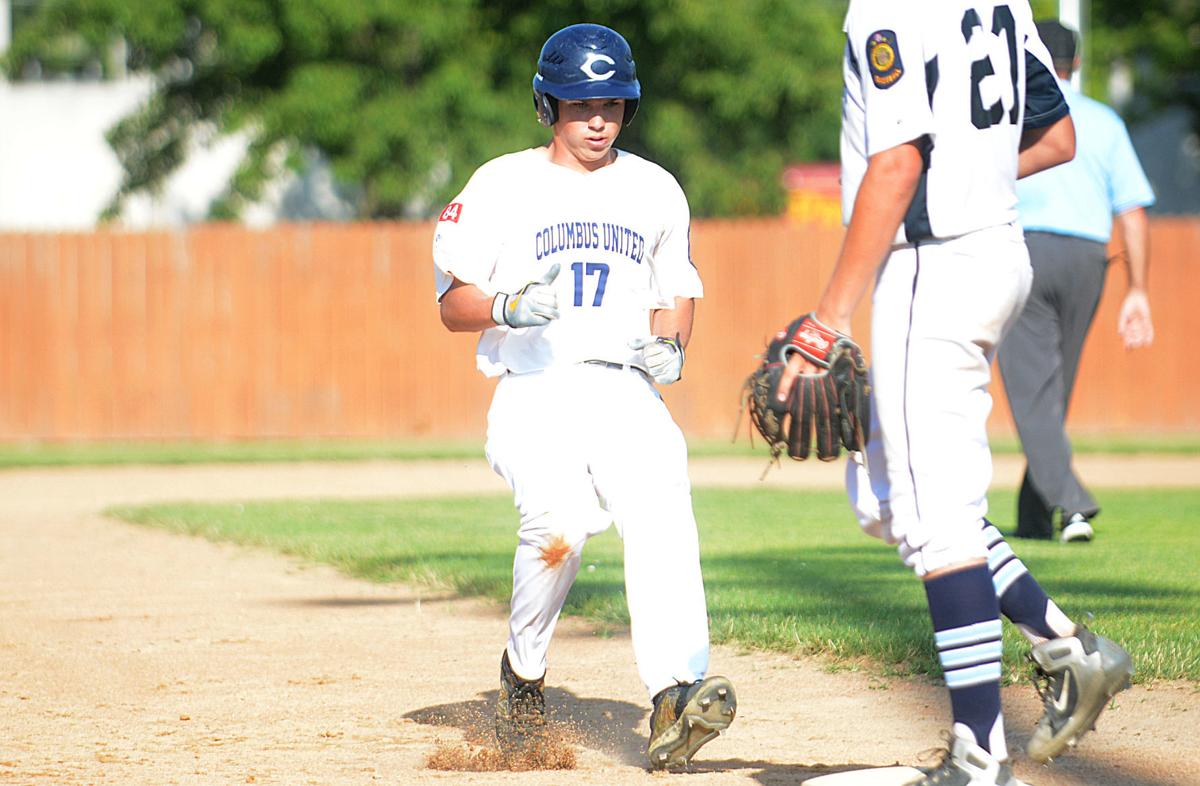 A five-run first inning by the Sandhills Global (Lincoln Pius X) Juniors forced Columbus United Federal Credit Union to settle for a loss in the final regular-season game on the schedule in Tuesday's 8-3 final at Pawnee Park.

After pushing five across in its first at-bat, Pius added two more in the second and held control throughout. Outside of a bases-loaded situation in the fifth, Columbus never really threatened to work its way back into the game.

The Junior Blues and coach Jimmy Johnson will now turn to the postseason and the Area Tournament that begins Friday in South Sioux City after finishing the regular season with an 18-17 record.

CUFCU is the No. 3 seed in the seven-team, double-elimination bracket that will determine one of eight spots for the state tournament in Lincoln beginning July 27.

"It was obviously not the result we wanted, but the positive we talked about was how we've been able to score runs in one inning. In games where we've put a few together, it hasn't come in multiple innings. And I know it was only one run in three innings, but I think that's certainly a positive and a takeaway from our offensive approach and knowing we're only a hit away in those innings from putting up a crooked number," Johnson said. "It's about not being content, making adjustments and finding ways to add on to our score."

It's been somewhat of a rough go lately for Johnson and his roster. After putting together an eight-game winning streak from June 12 through June 28, the Blues have closed the schedule 5-10.

Oddly enough, Columbus only faced early deficits in six of those contests. Nine other times, the Junior Blues gave up leads including two 3-0 advantages, 2-0 and 4-1.

That wasn't the case Tuesday when the first three hitters of the Pius order reached base and the visitors needed just two hits to score five times.

A walk led off the game followed by a hit batter, bunt single and sac fly for a 1-0 Pius advantage. An outfield error in the next at-bat doubled the lead followed by a squeeze bunt for a run. A single to left then a second error of the inning, two hitters later, each added single runs and a 5-0 score.

A leadoff walk, stolen base, sac fly, walk then back-to-back singles made it 7-0 through the first six Pius outs of the game.

CUFCU managed a run on a Drew Loosvelt double in the second scoring Tanner Kobza, a Drew Loosvelt RBI ground out in the fourth following a walk to Caleb Van Dyke and a single from Kobza in the next at-bat then came as close as it would when Tadan Bell pulled the first pitch he saw to the deep right corner scoring Shon Brockhaus and cutting the lead to 7-3.

Pius answered the very next inning after a leadoff double came around on a one-out squeeze bunt.

"A few things just kind of went their way (early)," Johnson said. "They had a couple of hits, we had a couple of balls get by our defense, had some walks and some hit batters - the kind of things that combine to give a team a big inning."

Bell's RBI drive to right looked to be the start of a big inning following Brockhaus' leadoff single then two-out walks to Colin Flyr and Cody Zrust. But Kobza followed Bell with a pop up to second and Loosvelt hit a weak grounder to the right side leaving the bags full of teammates.

"We had the types of guys we want at the plate, guys who have been successful for us all year," Johnson said. "Sometimes the game just doesn't end up going your way. Those guys will be ready for those opportunities next time, and they'll come through for us."

Columbus used four pitchers, starting with Colton Korth who went 1 and 2/3 innings with four hits, three earned runs, three walks and a strikeout. Seven of Pius' eight runs came in against Korth but, four of those were unearned.

"Our focus has really been pitching and defense because our hitting at times has been inconsistent," Johnson said. "We've got confidence in our pitching to give us a chance at districts. If we get the bats going at the right time and play the defense we're capable of, I know we can be right there."

After completing an 18-17 regular season campaign, The Columbus United Federal Credit Union Blues shift their attention to the Area Tournament…

Columbus United Federal Credit Union Junior Blues head coach Jimmy Johnson wasn't quite sure what he had 2 and 1/2 months ago.

Ryan Eickhoff, right, is greeted near the dugout by teammate Tadan Bell after Eickhoff made a tumbling catch in shallow center during Tuesday's Junior Blues Legion game against Lincoln Pius.

Junior Blues third baseman Shon Brockhaus loads up for a throw across the diamond in Tuesday's game.