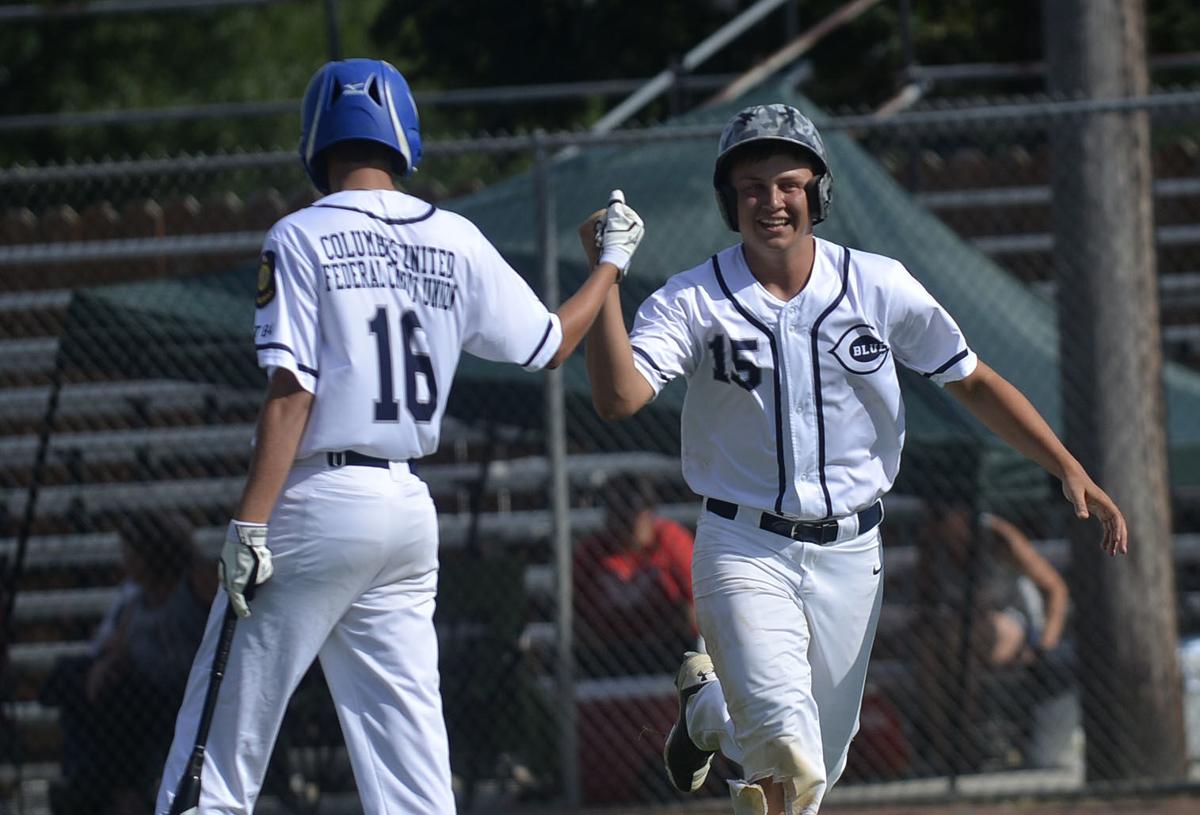 Trevor Schumacher, right, is greeted by teammate Izic Pillen after coming home for a run last week. Schumacher, Pillen and the Juinor Blues went 10-16 this summer. 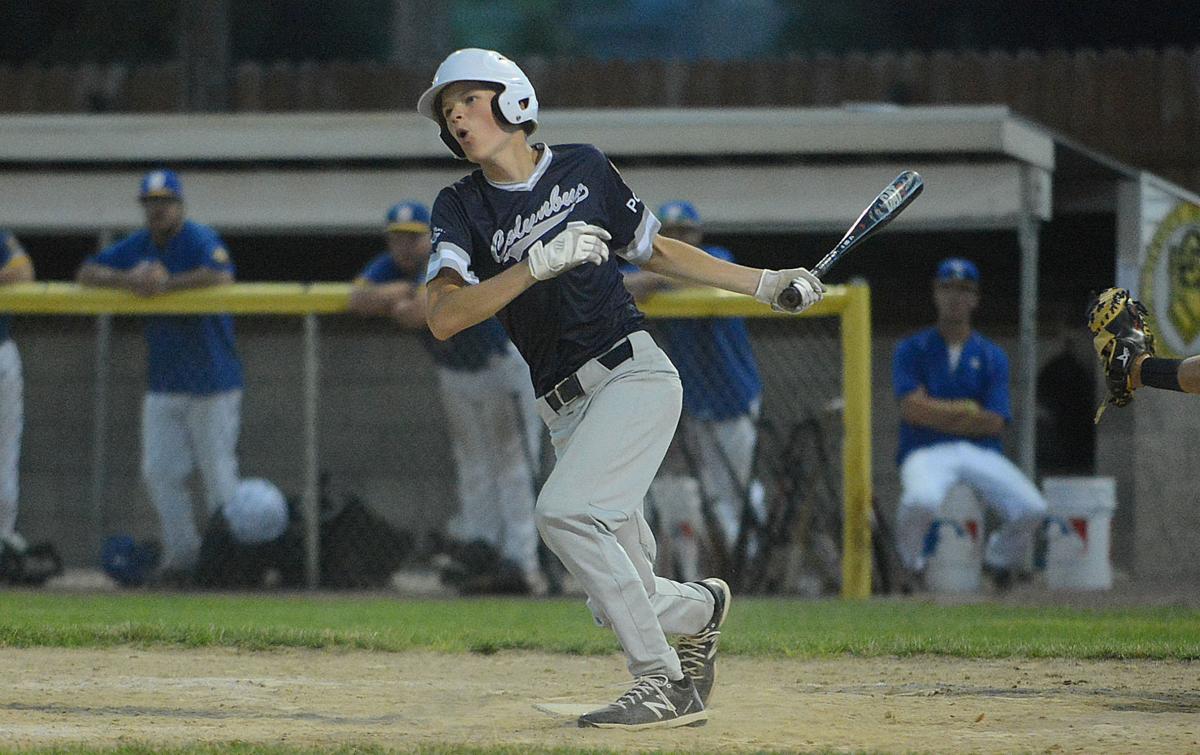 Ryan Eickhoff fouls off a pitch down the left field line in a game earlier this season. Eickhoff led the Junior Blues in hitting with a .368 average and was second on the mound with a 2.48 ERA in 31 innings.

Columbus United Federal Credit Union coach Jimmy Johnson had nothing but questions when he and the team came together for the first practice on June 1. With only two holdovers from the previous summer, that's understandable.

Eventually, two weeks of practice revealed a team that had the potential to hit consistently, a roster with raw ability on the mound and an average ball club in the field that was sometimes up to the task and other times suffered through the kind of mistakes typical of youth.

Johnson won't have the same list of unknowns next summer. Just about half, and perhaps a few more, depending on birth dates, will be back in the dugout in 2021.

When none of it seemed possible as recently as early May, the shortened time together, at the very least, built a foundation for a group of players that will soon step into the future of varsity and Legion baseball in Columbus.

“I’m just really grateful. It was a lot of fun just being back out there. I think our players felt the same way," Johnson said. "Being able to play and coach at this Juniors level was really big and really important, especially for those freshmen and sophomores coming in, to get a glimpse of high school baseball and begin making adjustments from their club league."

Ryan Eickhoff and Shon Brockhaus, the two remaining from a year ago, were expected to eat up several innings on the mound. Eickhoff did exactly that. The right hander tossed 31 innings. Brockhaus threw nine and started once. Three others emerged behind those two.

Jack Faust led the team with 31 and 1/3 innings pitched, went 2-2 in five starts, had an ERA of 3.35 and walked just two compared to 25 strikeouts. Yurisky Rivera started four times and had seven appearances. He never figured into a decision while posting a 6.52 ERA, 12 walks and 15 strikeouts. Conner Rausch, mostly a member of the Senior team, made one start and had six appearances. He went 1-1 with a 2.14 ERA, eight free passes and 18 Ks.

“We had some ideas (of what the team could rely on), but didn’t know how solid our pitching would be. But I thought we developed some good pitching," Johnson said. "Our scores didn’t always show it, but we certainly had some depth.

At the plate, CUFCU struggled through a late season slump before recovering for the final four games. There's nothing particularly impressive in the team's hitting stats, but like many, when the Blues couldn't score they couldn't win. Half of the losses came when Columbus scored three or fewer runs.

Eikchoff led in hitting at .368, Rivera drove in the most runs with 12, Faust and Eickhoff both had four extra-base hits and Faust stole 14 bases.

The team had a .913 fielding percentage, committing 60 errors in 690 chances. Like the hitting, pretty so-so, but like the pitching, there was development along the way.

“We really talked about the mentality of, ‘Whenever you get an opportunity, don’t just hope something good happens, expect to make a difference, expect to change the game,'" Johnson said. Looking back on those last four, six, eight games, our defense, we moved from making the routine plays to making some game-saving plays."

A sliding catch in the outfield by Rivera during the July 23 sweep of Norfolk and Jacob Wagoner's a play on a fly ball in the season-ending doubleheader at Grand Island were a couple examples of how the team progressed in that area.

Though members of Johnson's team could be chosen by the Senior team next summer, there are several playmakers that will return. Moving up are other talented youth players from club baseball, some of whom just won a state title.

Every Juniors squad comes with its own unique set of questions. Should the sports calendar be back to normal, many of those will be confronted during the spring.

Regardless of the makeup of the 2021 roster, there should be enough experience remaining to continue the progress made in 2020.

"Hitting, it was about developing a mental plan. Fielding was more physical and fundamental. Guys learned how to practice and how to conduct themselves with the type of urgency and effort we expect," Johnson said. "They brought that every day. We very rarely had to worry about their effort. Games, it’s pretty natural, but in practices, they were getting after it."

It wasn't perhaps an ending fit for a championship, but the result was the stuff of dreams considering the circumstances.

The Owens Wealth Advisors Junior Reds were set to defend a 10-0 record with four games this week eyeing a perfect season. They'll end with a p…

Brewers OF Cain opts out of 2020 season; series called off

Milwaukee Brewers outfielder Lorenzo Cain has decided not to play the remainder of the 2020 season.

Bubic to start home opener for Kansas City against Chicago

NEW YORK (AP) — Major League Baseball has postponed this weekend's scheduled series between Toronto and Philadelphia because of concerns about the coronavirus after two Phillies staffers tested positive.

Trevor Schumacher, right, is greeted by teammate Izic Pillen after coming home for a run last week. Schumacher, Pillen and the Juinor Blues went 10-16 this summer.

Ryan Eickhoff fouls off a pitch down the left field line in a game earlier this season. Eickhoff led the Junior Blues in hitting with a .368 average and was second on the mound with a 2.48 ERA in 31 innings.