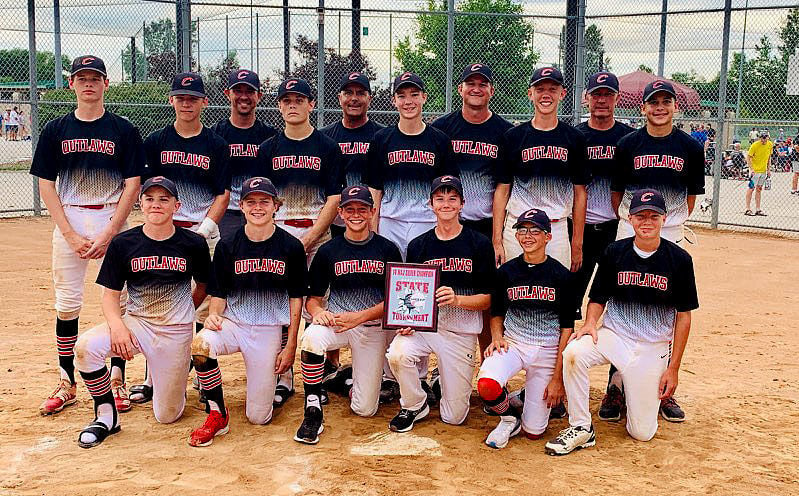 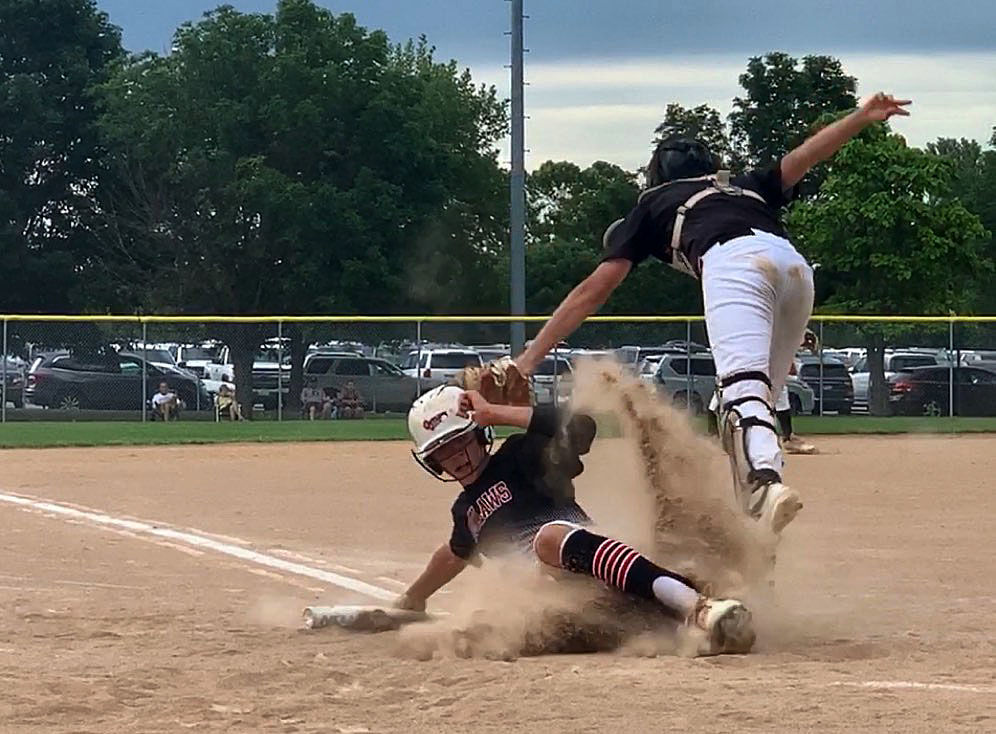 Caden Kapels slides into home plate under the tag this past weekend at the Nebraska USAAA state tournament in Omaha. 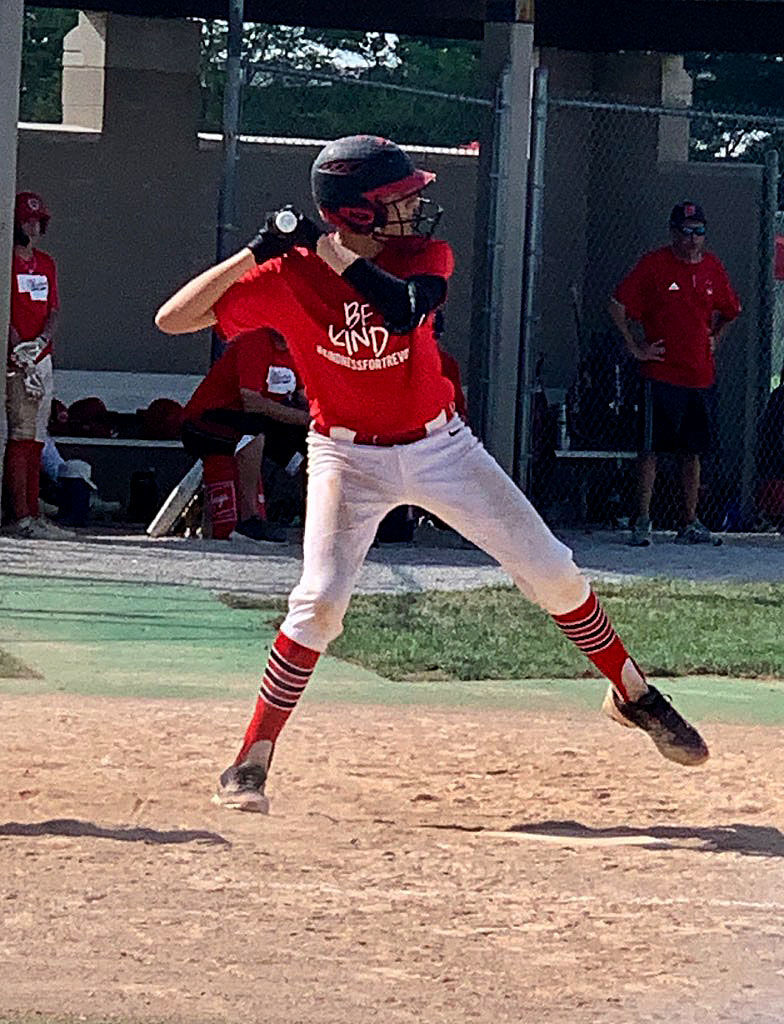 Preston Hastreiter takes a look at a pitch last week at the Nebraska USSSA state tournament in Omaha. 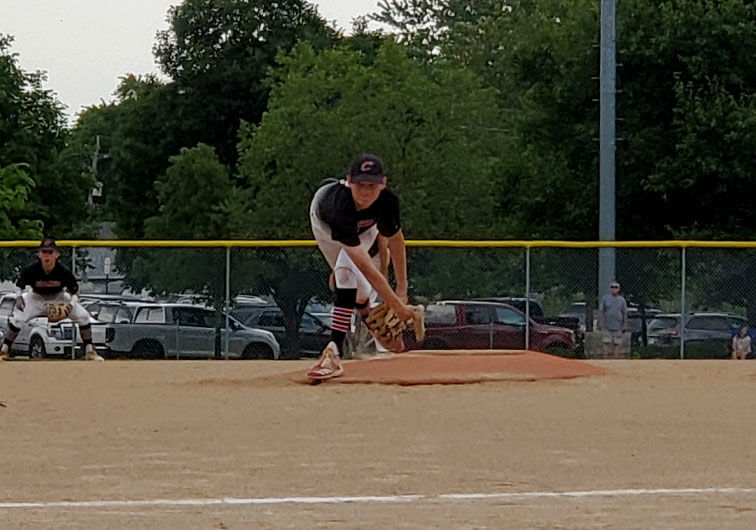 Outlaws pitcher Jarrett Bell unloads a pitch during the quarterfinals of the USSSA state tournament last Saturday in Omaha. 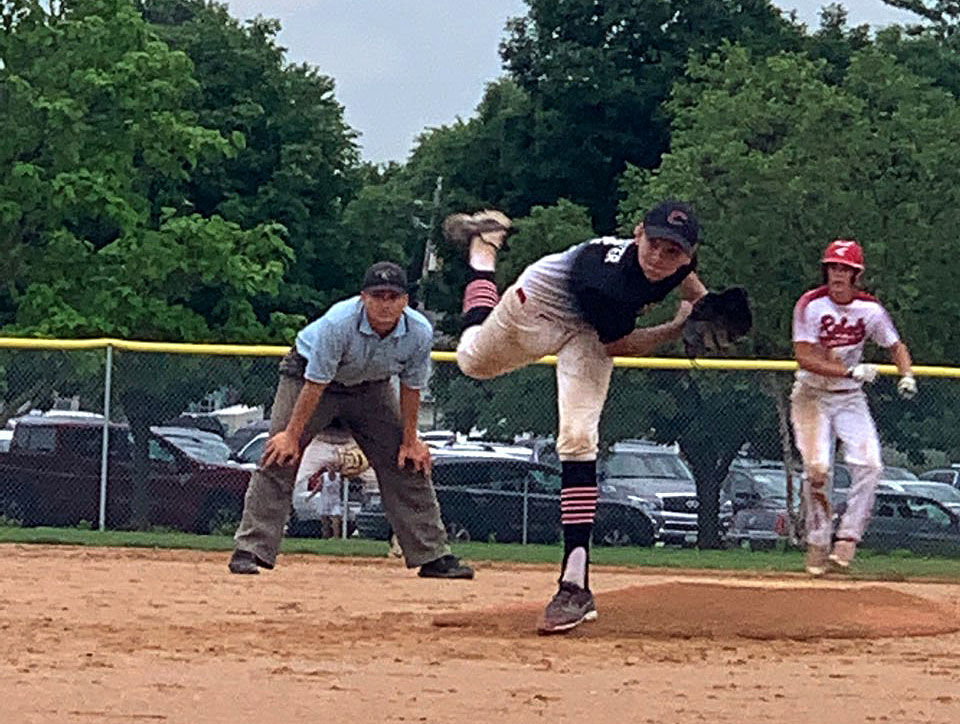 Preston Hastreiter throws the final pitch of the championship game during the Outlaws USSSA state title win Sunday in Omaha.

It wasn't perhaps an ending fit for a championship, but the result was the stuff of dreams considering the circumstances.

In the final game of the final tournament of the final youth event in the careers of the 14U Columbus Outlaws, Columbus won the USSSA major championship 7-4 on Sunday in Omaha.

The game was called on the time limit - not the most enjoyable way to go out - but after six years together there was no better way to cap the end of an era.

Columbus went 4-1 in the tournament, splitting two games in Friday's pool play round before winning once Saturday and once Sunday.

To head coach Ted Hastreiter's recollection, it's just the second Outlaws team, following the 14U group from 2017, to win the USSSA Majors title - the highest level of USSSA baseball in Nebraska.

It was especially meaningful to Hastreiter, who has three sons. Preston, the youngest, was on the mound for the final outs of the tournament.

“There is no better way (to end). We knew we weren’t playing after this weekend, and they were all going for the same goal – to hoist that championship up and wear those medals," Hastreiter said. "It’s time to call this chapter of our baseball careers over. It’s time to turn the page now."

Eight weeks ago, there was no guarantee the Outlaws would ever play organized baseball this summer let alone finish the season in grand style. Although Gov. Pete Ricketts had approved the start of baseball and softball practice on June 1 and games on June 18, the board of directors for the Outlaws had yet to decide in late May.

Hastreiter voiced his opinion and waited anxiously the night of the meeting. The good news eventually came, and he and the boys were on the field June 1.

The team played in a tournament in Omaha the first weekend of the season, played in another during Independence Day weekend and filled the rest of the schedule with doubleheaders against area opponents.

Pitching has typically been the strength of the team, according to Hastreiter. The roster went about five or six deep for available arms.

In 2015, the Outlaws won the AA state championship and moved up to the AAA level. Last year, after finishing third at state, the power points from that result moved the team up again, this time to the Majors.

“Last fall we were kind of like, ‘Oh boy, how are we going to handle this,'" Hastreiter said.

Practices began in January and then were shut down in March. The team was then idle until June 1. Two tournaments and other contests left the Outlaws 11-9-1 heading into USSSA state. That meant the 19th seed out of 19 teams.

Columbus faced top-seeded Omaha Tigers Red in the opener and lost 5-4 before winning 11-10 over Elkhorn Prime Red. That left the Outlaws as the second-seeded team in the Silver Bracket that included eight other teams.

First up was the Gretna Hurricanes on Saturday.

“We coached the kids up to let it all hang out. This is our last year, our last tournament," Hastreiter said. "...Saturday was all about getting to Sunday; what have we got to do to make it to Sunday? The kids put it all together, woke up Sunday and said, ‘We’ve got one game here. How are we going to make it to the championship? They put all the pieces together and made it happen."

Columbus trailed Gretna 4-1 in the bottom of the fifth when Wyatt Swanson blasted a three-run home run that seemed to spark the team for the next three games. The Outlaws went on to win that one 10-6, turned to Jarrett Bell and Swanson on the mound in Sunday's first game, won that one 4-0 then turned to Jude Maguire and Preston Hastreiter for Sunday.

Columbus picked up a 7-4 win that was called after the two-hour time limit. As the visiting team, the Outlaws took the field up three and aware that there were only three minutes on the clock. Hastreiter induced a ground ball on the first pitch for one out and immediately had his dad sweating.

"We're going to need to slow it down a little bit," the elder Hastreiter said. "We can't collect outs that quick."

After another out, the Rebels reached base on a walk. Coach Hastreiter went out to the mound for a brief reminder to focus on the hitter and the next out then watched moments later as a weak pop fly was snagged in left field.

The home umpire went out to the base umpire, turned back around toward the plate and signaled the game was over. There might have been a dogpile, Hastreiter can't remember for sure, but just like that, six years of summers together in the dugout and between the lines was over.

Hastreiter gladly accepted a bath from a water jug and reveled in the moment.

“I drove home soaking wet. But that’s OK, I’ll take that," he said. "That’s every coach's dream right there."

Columbus High varsity coach and Junior Blues Legion coach Jimmy Johnson found out about the Outlaws later that night and couldn't help but be excited. He'll absorb this group into the Columbus High School program next spring and likely lead most in summer Legion ball.

“It’s exciting any time a non-metro team does it. For it to be Columbus is really exciting," Johnson said. "We’re excited to know there’s another wave of athletes coming in here to help our program out. We’ve got a few classes in a row that are pretty deep here. Hopefully, we can translate that into success in the youth level into the Legion level as well."

For Hastreiter, his coaching days are done. He leaves the rest of it up to Johnson and his coaching staff while he takes a seat in the grandstand. Next to each of the player's parents and grandparents, he'll likely be their biggest fan as they advance to the next level.

He joked with the team that since their next set of coaches are paid to do their job, the players will have to listen a little better.

And as far as how he'll spend his free time in the summer?

“I’m going to try and get better at golf, I think," Hastreiter said with a chuckle. "Preston will continue playing, so, I’ll just be able to be on the other side of the fence and sit there and watch. That’s not all bad."

The Owens Wealth Advisors Junior Reds were set to defend a 10-0 record with four games this week eyeing a perfect season. They'll end with a p…

Brewers OF Cain opts out of 2020 season; series called off

Milwaukee Brewers outfielder Lorenzo Cain has decided not to play the remainder of the 2020 season.

NEW YORK (AP) — Major League Baseball has postponed this weekend's scheduled series between Toronto and Philadelphia because of concerns about the coronavirus after two Phillies staffers tested positive.

Bubic to start home opener for Kansas City against Chicago

This Date in Baseball

Caden Kapels slides into home plate under the tag this past weekend at the Nebraska USAAA state tournament in Omaha.

Preston Hastreiter takes a look at a pitch last week at the Nebraska USSSA state tournament in Omaha.

Outlaws pitcher Jarrett Bell unloads a pitch during the quarterfinals of the USSSA state tournament last Saturday in Omaha.

Preston Hastreiter throws the final pitch of the championship game during the Outlaws USSSA state title win Sunday in Omaha.