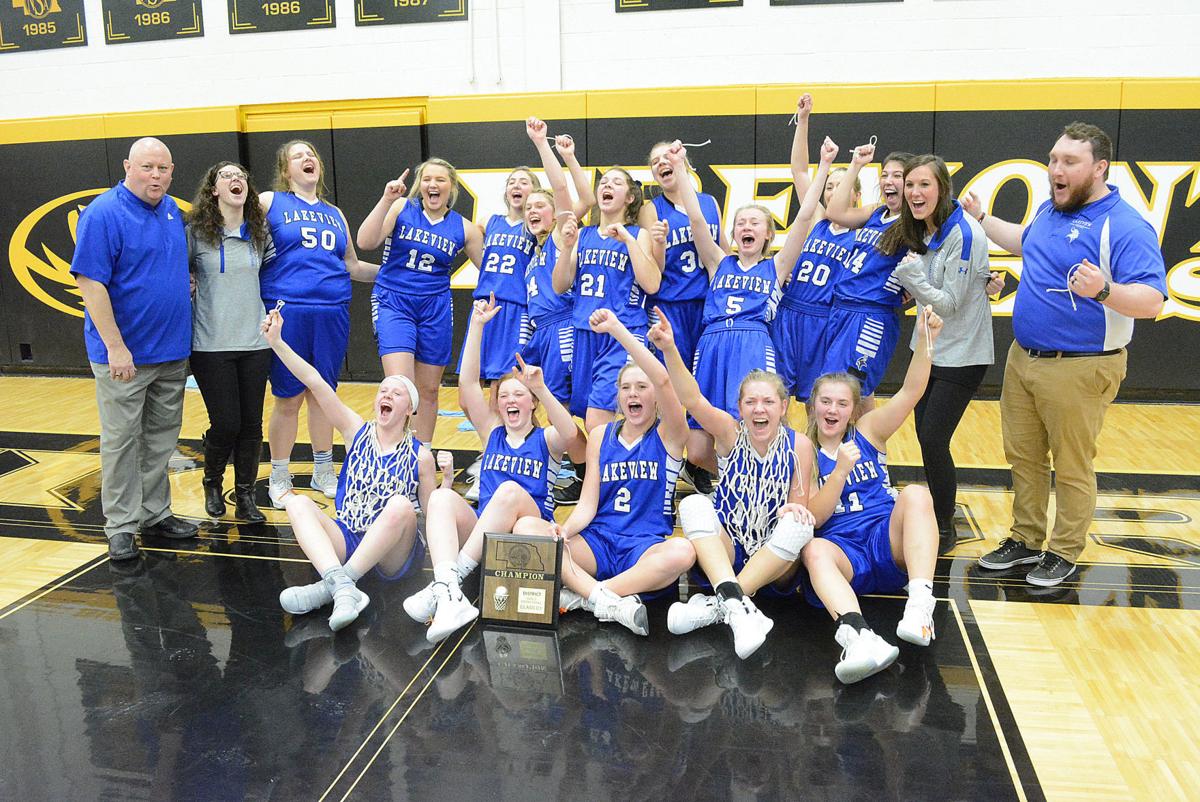 Lakeview girls basketball coaches and players celebrate the moment in a team photo after defeating Louisville in February and qualifying for the first state tournament for the program in 28 years. 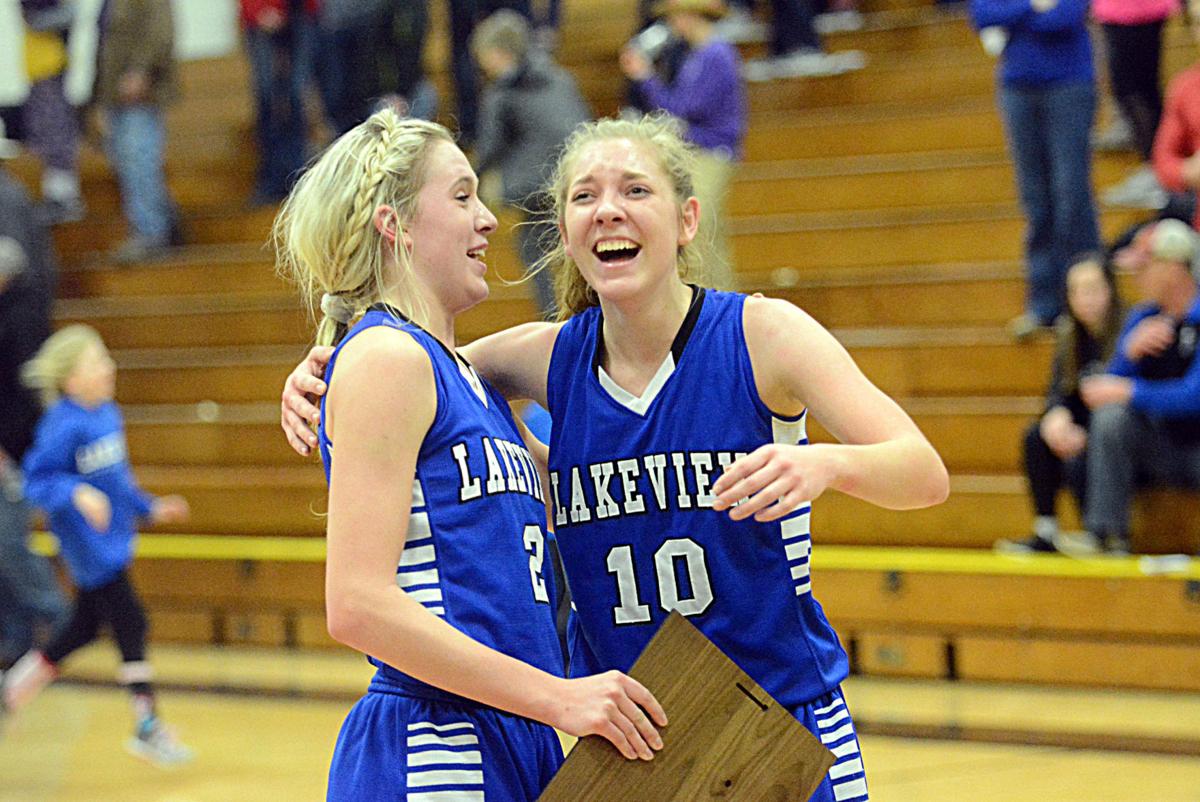 Abby Kapels, left, and Gracie Borer share an embrace in Fremont after winning the district title. Kapels, Borer and the Lady Vikes closed the season 18-8.

Lakeview girls basketball coach Monte Jones was up against history when he took the position in 2017.

The Lady Vikes, perennial losers on the court, hadn't been to state in 28 years. In the decade-plus leading up to Jones' arrival, they hadn't even managed a winning season.

Jones' first year ended with 11 wins and a loss in the sub-district final, but also 13 losses. Progress, yes. But for many, it probably felt like more of the same.

In reality, seeds had been planted. Jones, the sower, now had to convince his crop it was good enough, smart enough, and doggone it, people liked it.

OK, so maybe it wasn't the Stuart Smalley approach. But an emotional appeal of some sort was necessary for a program that was a generation-plus removed from a winning attitude.

"I think coming in, they had had good coaching, because fundamentally, stuff was there and some basketball smarts were there and they had a good foundation. The little switch I had to flip was just a simple change in expectation," Jones said. "Like, ‘You are capable. You’re athletic enough. You’re skilled enough. If you’ll put in the time, you will be good enough to be a state tournament team and be a top-10 team.’

"They bought in. I had enough players that bought into that, that the result was a self-fulfilling prophecy."

The Lady Vikes dropped the first game of the year but then rattled off seven straight wins. Their old nemesis, the Scotus girls, ended the run in the Holiday Tournament championship game, but those seeds were beginning to sprout and bear fruit.

None of the girls on the roster had ever experienced such sustained success. Even casual observers began to take notice as proven by Lakeview's inclusion in the Lincoln Journal Star's Class C-1 ratings. The Lady Vikes were listed at No. 8 in the first ratings released after the New Year.

Lakeview bounced back from the loss to Scotus with another run of four in a row before finishing up the regular season schedule dropping five of nine.

It was a brutal stretch to be sure, but that stretch also included a win over those same Shamrocks in their home gym, an overtime triumph, and the sudden belief that this year would be different.

That belief manifested itself into easy wins in the sub-district round then a defensive masterpiece against one of the state's top offensive teams in the district final.

Louisville averaged more than 53 points per game and had hit more than 100 3-pointers during a 21-4 season. Lakeview won 47-42, Louisville's second-lowest total of the season, and limited the Lions to just 3 for 22 (13 percent) shooting from long distance.

The seeds Jones planted in the offseason and preseason practices had grown into a bountiful harvest. By constantly reassuring the girls, the never-good-enough attitude had been eradicated.

Jones took an approach espoused by Tom Osborne from "back in the day" as he put it, essentially, catching the girls doing something right.

"A lot of times you get into this idea that coaching is just correcting people all the time. Catching them doing it right and pointing that out and letting them know, 'Look, if that’s the way you do it, that’s good enough to get it done. Just do it that way every time,'" Jones said.

"I think coming in, my players had the foundation. It was just believing that they were capable. That’s telling them over and over and pointing it out, both live in practice and on film. Just saying, ‘Look, this is good enough to get it done.’ The games that we had in the season that were turning points seemed to arrive at just the right times and then the success just steamrolled after that."

Jones credited Gracie Borer and Makenna Klug as the first believers in his message. It showed by the number of workouts they attended during the summertime.

When their skill set showed dramatic gains, that was enough to keep coming back. Others on the roster saw those results and followed suit.

"Both of those two were mostly leaders by example," Jones said. "It wasn’t by accident that they ended up being our two leading scorers and two people with the most postseason honors, because they put in the most time and they believed everything I told them and they bought in."

Once the season arrived, Jones used all those wins early on as proof of what he had been preaching.

"Whenever those success spots came I would jump on it and tell them, ‘I told you. I told you, you wouldn’t be disappointed. You remember that?'" he said. "Then just reinforcing their work habits led to a snowball rolling down the hill. It gained momentum."

Confirmation came most clearly after the win over Grand Island Northwest. Northwest was ranked No. 6 in Class B at the time. Also called the Vikings, Northwest went on to win the Class B state championship thanks in large measure to All-State point guard Whitney Brown who averaged 16.9 points per game.

"That doesn’t happen if you don’t think you can get it done," Jones said. "Games like that, on the road, against teams like that, if there’s any crack in your confidence it’s going to show up and you’re going to bleed that away.

"That told me right there they we really do believe what I’m telling them. We finished off that game. It was a game where everything didn’t go right. We had foul trouble and we had some injury stuff and we fought through it and won a great game. At that point I knew we had a chance now to get over the old concept of ourselves. I think we’ve arrived a little bit."

The special season came to an end in the first round of the state tournament against Mitchell, but not before Lakeview showed more heart, fought back from a 13-point halftime deficit and took a brief lead in the fourth quarter.

There were some sad faces and a few tears, but those had mostly to do with the journey coming to an end than it did coming up short. It had been such a revolutionary season. No one wanted it to end.

That subtracts almost all the size from the roster and nearly all the proven talent.

At least initially, those who remain were paying attention. They've been back out in the field, tilling the land and preparing to plant for a new season.

"The biggest indicator is how they showed up. Rule No. 1 is, you have to show up. My gym was packed with a core of players this year. Players were in the gym every possible chance that they could. I saw the improvement in them and they’ll see the improvement," Jones said. A lot of them were jumping from JV basketball up to varsity. It’s different, so I’m going to have to be patient with the process.

"But by the same process, I’m going to have pretty much the same team for two years here because we don’t have a senior class. They’ve seen the success and they’ve bought in and I know they’ve bought in by attendance in the weight room and the gym this summer was great."

Nate Tenopir is the sports editor of the Columbus Telegram. Reach him via email at sports@columbustelegram.com.

When Lakeview girls basketball made the state tournament in 2019, it was the first trip to Lincoln in 28 years.

Lakeview girls basketball coaches and players celebrate the moment in a team photo after defeating Louisville in February and qualifying for the first state tournament for the program in 28 years.

Abby Kapels, left, and Gracie Borer share an embrace in Fremont after winning the district title. Kapels, Borer and the Lady Vikes closed the season 18-8.