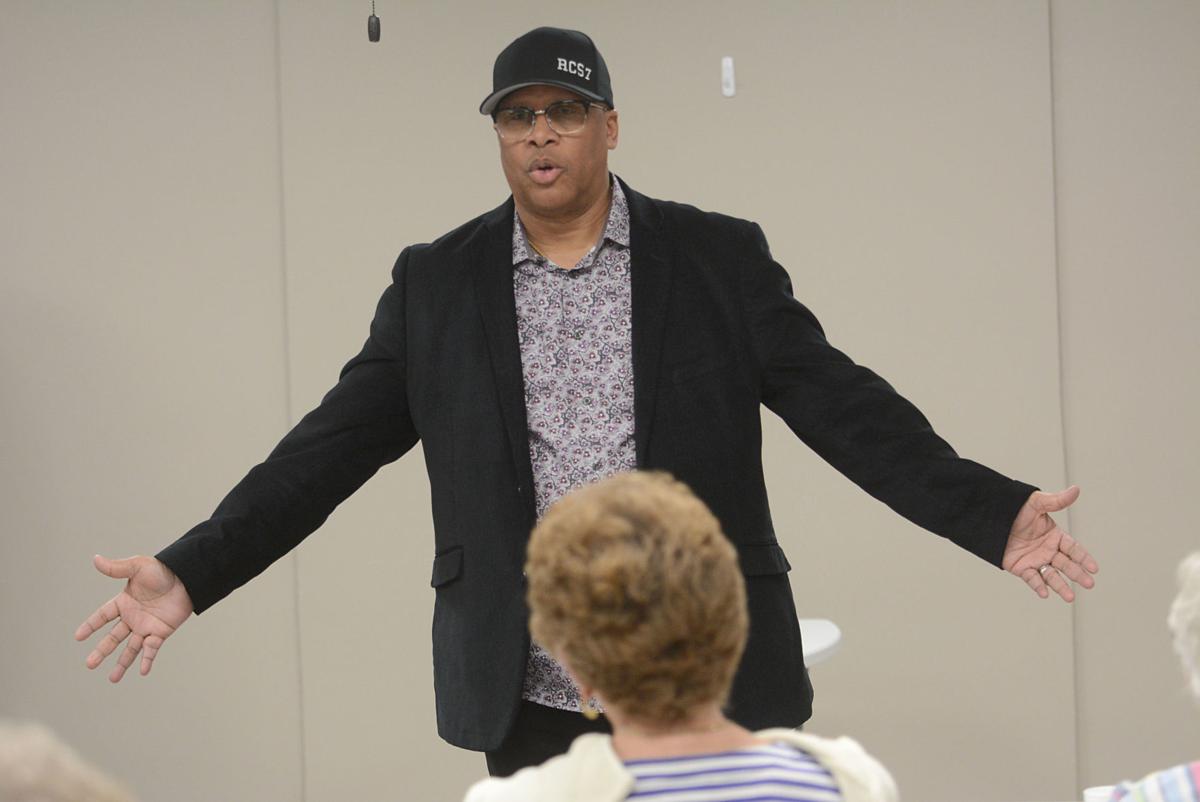 Former Husker Ricky Simmons speaks during the Aging Mastery Program offered by the Columbus Community Center last week. Simmons is a reformed drug addict who turned his life around and became a licensed drug and alcohol counselor. 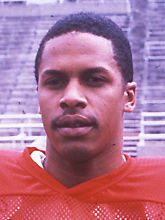 Simmons, shown in a mugshot from his playing days at Nebraska. 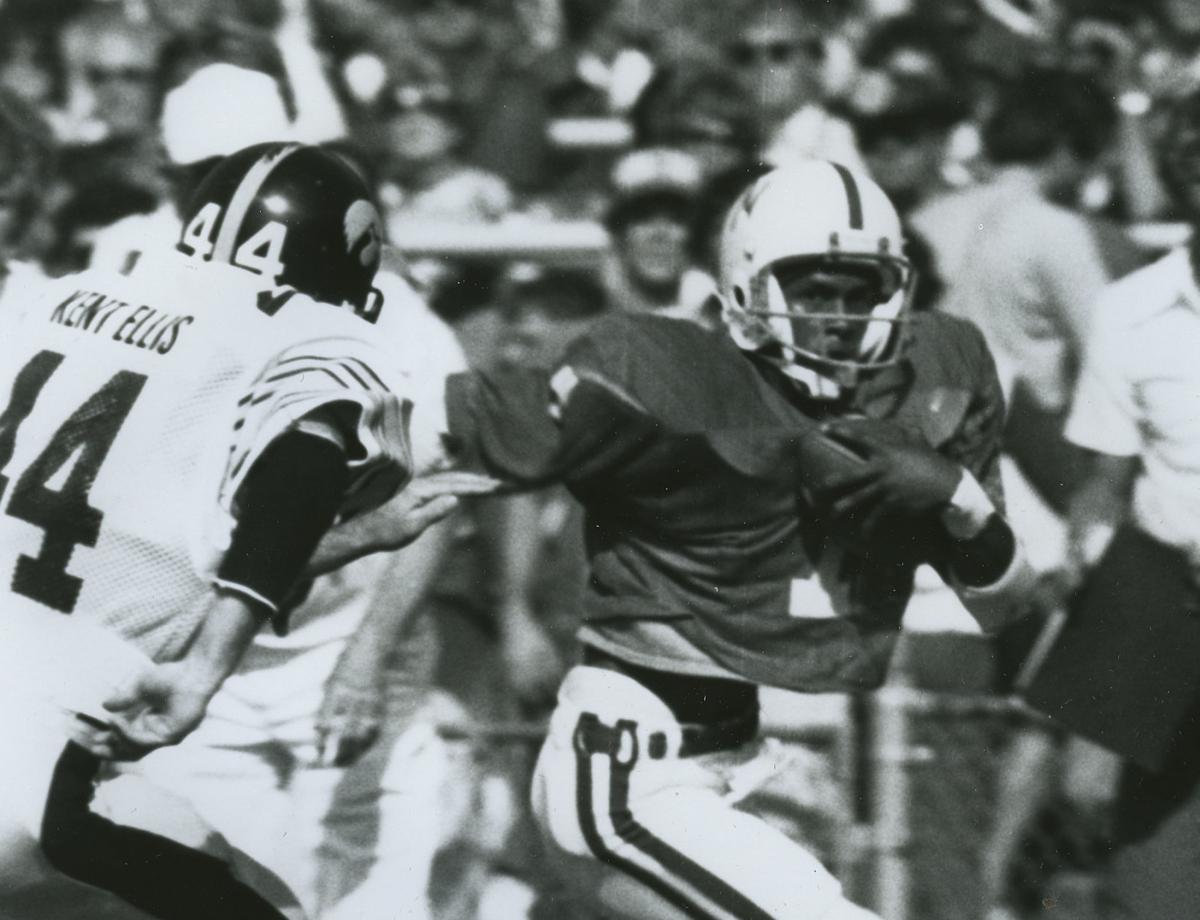 Simmons avoids an Iowa tackler during a play in 1982. Simmons went on to a short stint in the USFL after Nebraska and was picked up by the Atlanta Falcons before drug use ended his playing career.

Simmons, who played alongside Husker greats Turner Gill and Mike Rozier, and who was part of the 1983 team that went for two in the famous - or infamous - 31-30 Orange Bowl loss to Miami, had since lived his life mostly as a drug addict.

That particular night, he was in his room smoking crack when his 84-year-old father hollered for his attention just outside the door. Startled, not only because he was caught using, but because he thought dad had been in bed for a couple hours, Simmons heeded the call for what turned out to be the final verbal conversation between father and son.

Dad made him promise three things: 1. Don't ever give up. 2. Put God in your life. 3. Get up everyday and look like somebody.

His father had a stroke the next day. Simmons never heard his dad's voice ever again.

Yet, not even that experience was enough to bring the drug use to an end. The shame of getting caught, dad's forgiveness and the encouragement he gave him that he could one day find a way to stop, none of it mattered.

It would be 2008 and a letter from his former coach, Tom Osborne, during a fourth trip to prison, that finally convinced Simmons to turn things around.

"It was a real brief letter, a paragraph," Simmons remembered. "It said, 'Dear Ricky, I know your parents believed in you. I believe in you. Upon your release if there's anything I can do to help you, feel free to contact me.' At that point, I fell on my knees and I turned my life over to Christ. Got up off my knees and my life changed."

Simmons shared that story and many others with a group of seniors last week in Columbus during the first installment of the Columbus Community Center's Mastery Aging Program.

In the decade since Osborne's letter compelled Simmons to get sober, he has become a licensed drug and alcohol counselor and motivational speaker.

Simmons travels the United States and speaks to crowds ranging from the Columbus seniors he shared his message with last week to students to those currently locked up.

He works out of his home and office in Lincoln where he typically sets up two speaking engagements per month. How his message is expressed, and what stories he shares, are both tailored to the audience.

In Columbus, Simmons spoke about the importance of being positive, making a routine for being self sufficient, and living by the Golden Rule while not expecting the same treatment in return.

His career was part of the revelation that came to him in the immediate moments after reading Osborne's letter.

Since junior high, drug use was a normal part of Simmons' life. It started early on, he said, as a coping mechanism for playing football. Though he was gifted with abilities he used to become the leading rusher in the state of Texas his high school senior year, he didn't really like football.

When that became apparent, he and his father began a reward system, of sorts, for staying on the field. When he was young, Simmons received a bike.

A few years later, he earned fancy clothes he eventually used to form the proper image needed to find a girlfriend. A few years after that, it was a car.

It seemed he was set to sign with Barry Switzer and Oklahoma for his college career until Osborne visited the Simmons household and caught the attention of Ricky's parents by informing them of Nebraska's team graduation rates.

For two school teachers, that was all it took.

Simmons came to Lincoln and continued to use drugs but, because he was never late to practice or meetings, and was never in trouble, could continue to hide his habit in the shadows.

Though he was a receiver in Osborne's option offense that only caught 21 passes in four years, he attracted the attention of the United States Football League. He was drafted by the Washington Federals in 1984, played a year, then moved on to the Orlando Renegades for 1985.

He was offered a contract by the Atlanta Falcons and was on to the NFL but never played a single game.

"Cocaine convinced me that football was getting in the way of my using," Simmons said. "I went from being potentially the starting receiver for the Falcons to four trips to prison behind drugs.

He was never selling any, but caught the attention of authorities due to the amounts he always had on hand.

"In my terms, I’m a dope fiend. I like to get high. That was my thing, as long as I could get high," he said. "People would say, ‘You’re buying it like a drug dealer,’ because I would buy such large amounts, but I’m giving a lot away to my friends and I’m using a lot. I never wanted to run out."

Simmons eventually served sentences of two and 1/2 years, three years, 18 months and three to five years the final time when Osborne's letter reached him in 2008.

As he looks back on it now, Simmons said the timing was finally right for his transformation. Both of his parents had passed away and though he had a son, from his perspective, there was nothing left to live for. Although he never seriously considered suicide, his future was hopeless.

Osborne, he said, restored that hope and reminded him that even if its just his former coach, someone cares.

Simmons and Osborne have had weekly meeting since then as a means to keep Simmons accountable - something he says is more for him than Osborne.

Simmons also has others accountable to him as a counselor. Fellow former Husker linebacker Terrell Farley, perhaps the best defensive player on the 1995 national championship team, is one of them.

Farley was kicked off the team in 1996 for his drinking troubles. When he was ready to become sober in 2014 and reached out to Osborne, Farley was put in touch with Simmons.

The two speak every day.

But while Simmons is now an example for others to follow, he also understands that he'll never truly be free of his addiction.

That's one reason why he still meets with Osborne and why he wakes up every day at 3 a.m.

Simmons goes to bed at 6 p.m. because the hours that followed were the ones in which he normally got high. Rather then be tempted by the past, he'll get his rest, wake up earlier than early, read scripture, pray then begin his day.

"Playing for Tom, I’ll never be able to top that because of what he represents. I don’t want to walk into coach Osborne’s office and say, ‘Hey, coach, I dropped the ball.’ I’m not doing that. That’s not going to happen," Simmons said. "

Former Nebraska split end Ricky Simmons can make even the grouchiest of grinches feel better about the world. Go ahead and try him sometime. S…

Former Husker Ricky Simmons speaks during the Aging Mastery Program offered by the Columbus Community Center last week. Simmons is a reformed drug addict who turned his life around and became a licensed drug and alcohol counselor.

Simmons, shown in a mugshot from his playing days at Nebraska.

Simmons avoids an Iowa tackler during a play in 1982. Simmons went on to a short stint in the USFL after Nebraska and was picked up by the Atlanta Falcons before drug use ended his playing career.