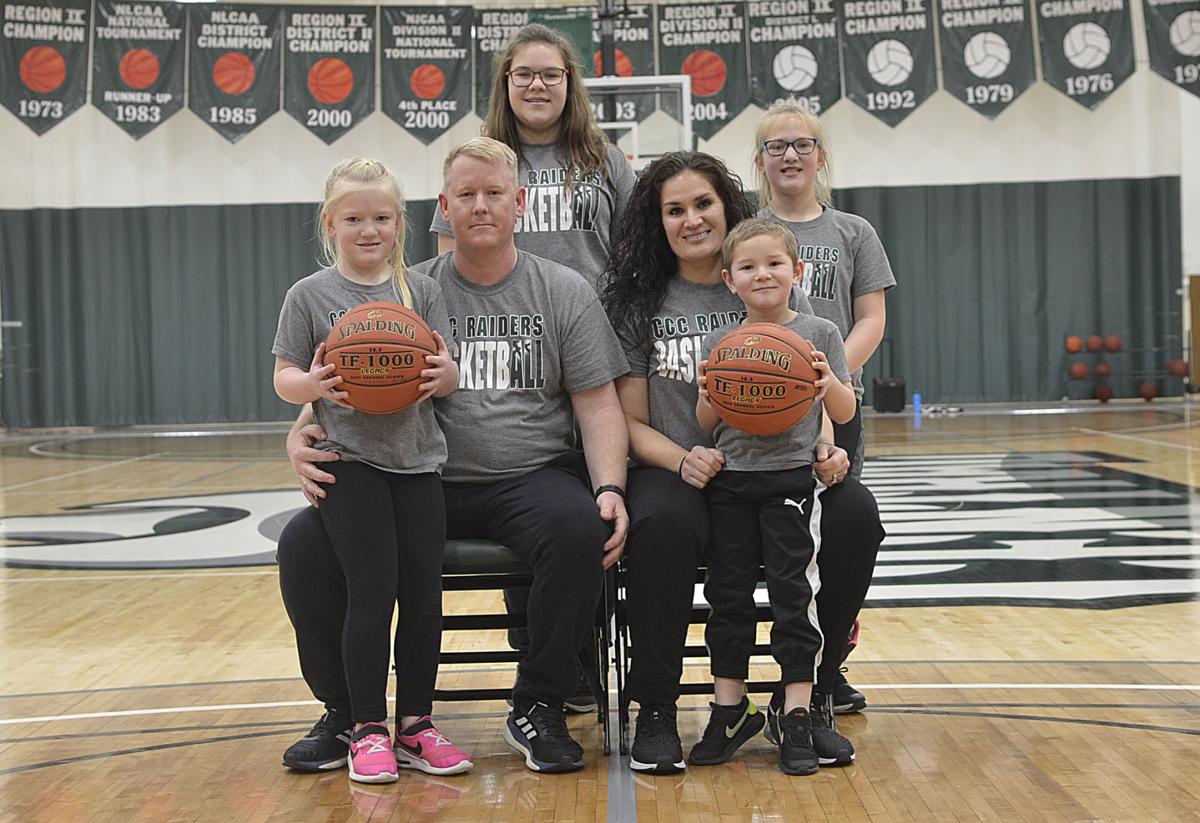 The Perkins family poses for a photo at the Raider Fieldhouse recently. Billy and Celesta Perkins are joined by their children, left to right, Leialani, Tesema, Faitau and Malia. Billy, head coach, and Celesta, assistant, make up the Central women's basketball coaching staff. 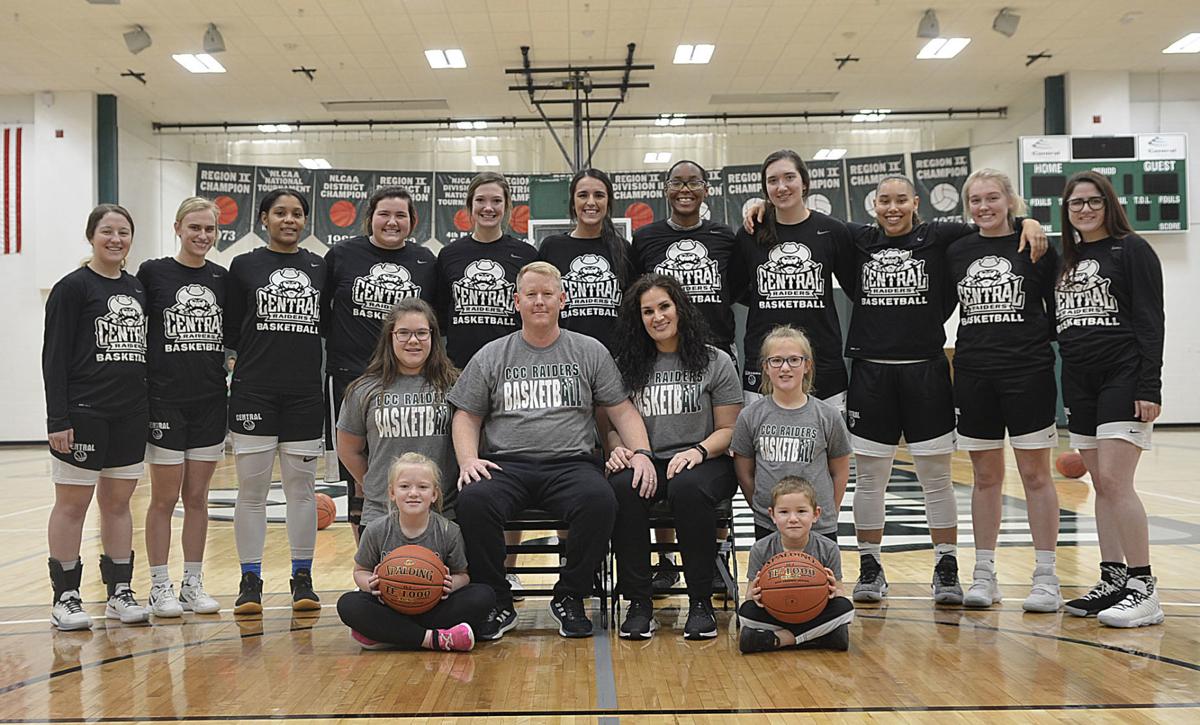 Central women's players join the Perkins family on the court at the Raider Fieldhouse. Playing for a husband-wife coaching staff, the players say, brings a family atmosphere to the program.

Central Community College-Columbus basketball coach Billy Perkins and his wife, Celesta, had a natural connection from the beginning - basketball.

What started as long-distance phone calls, in which the conversation almost always centered around hoops, has since blossomed into a 15-year marriage, four kids and a partnership on the bench for the Central women's basketball program.

Billy, in his third year leading the Raiders, is assisted by Celesta in a husband and wife duo that makes up the Central coaching staff.

While she's always had a hands-on approach to helping out Billy's teams before the Perkinses moved to Columbus, Celesta's position as Raiders' assistant is the first time she's done so in an official capacity.

It's unique, maybe a little bit odd, and certainly out of the ordinary. But when love for basketball and love for one another intersect so clearly, Billy and Celesta count themselves lucky they can share that love at home and on the job.

"It’s a special opportunity because we can go home and discuss basketball," Billy said. "Having her on my staff and having her see the ins and outs of every day, it’s nice that she understands the grind that we put in. Also, she understands the girls and our personnel. Instead of her just seeing from a spectator’s side, she’s really deep inside our program and helps us understand our kids better."

Billy has an extensive coaching history. Before he came to Nebraska, he coached high school basketball in Texas for 19 years including a few stints in women's college hoops as a graduate assistant at Sul Ross State.

He started at Childress High School where he coached Celesta's younger sister, Vanessa, in freshman ball. Eventually, when Vanessa moved on to the varsity level, her and her varsity coach thought it would be a good idea for Billy to meet Celesta. He already sort of knew of her because of the family, but had little other contact.

The trouble was, Celesta was away at college at BYU-Hawaii then BYU-Provo. When she was home between semesters, the two went to a basketball game together. But other than that one occasion, they interacted almost exclusively over the phone.

And even then, the topic was almost always basketball. It was a friendship that had yet to find its romantic purpose.

After a year of talking on the phone, Billy was heading to Sul Ross for his masters and suggested, since Celesta loved the game, she come back and try to make the team. She did, but was mostly injured that season. Billy went back to the high school ranks the next year, but by then the friendship was evolving.

After a year and a half, he proposed at Christmastime. The two were married seven months later. A decade and a half later, Celesta is there at Billy's side providing a different outlook.

"I think that, really, we kind of complement each other really well because he brings a lot of experience from the coaching side," she said. "I’m pretty new to coaching, but I played throughout high school and college. To be able to bring that perspective of a former player, and the female perspective, kind of helps us. We complement each really well."

Though this is her first role with a title on one of Billy's coaching staffs, she's been there through almost all of it, officially and unofficially. To Billy's knowledge, Celesta has only missed five games.

"There’s a grind of basketball," Billy said. "Same thing with my kids. They’ve probably missed five games in their life as well. To be able to understand the importance of our teams that we coach, a lot of times I spend more hours of the day with them. Even though I see them at home, usually after a road trip or even after practice, my kids are asleep. I really testify that our program is built around the family aspect of it because of the time we put in."

With a husband and wife leading practice and sons and daughters close by, players in the program can't help but feel that they, too, are part of the family.

"I think it’s good especially for us that travel out of state," sophomore Isabel Diaz said. "I think it’s a good home vibe. It’s nice to have coaches that don’t only care about us on the court, but how we're doing outside or if we’re homesick.

Diaz is from Texas and isn't the only player that left home to come to Central. The roster also includes another Texan, a player from Georgia and one from Oklahoma.

Having some or all over to the house is a regular occurrence. So too are the big-sister roles many of the Raiders play for the Perkins children. Billy and Celesta wouldn't have it any other way, even if that means seeing all sides of the family.

"The first year we were here there was a ref that was getting on to me for screaming on the sidelines," Celesta said. "He came and told Billy, ‘Hey you need to have her sit down. She’s being too loud.’ He looked at the ref and said, ‘She’s my wife. You tell her.’"

But that's not normally the case. Like most coaching staffs, even one that includes husband and wife, there are differing personalities.

On this one, Billy is considered more of the intense, no nonsense type. The girls consider Celesta more low key.

"I think it’s like the perfect fit," Diaz said. "He’s straight forward and to the point. He likes it that way. She’s more of the even out, chill, we’re here to have fun. You made a bad shot it's OK, that’s OK, play good on defense. She points out that stuff. It’s a good balance."

There are dozens of stories to tell about moments at games or in practice, too numerous to mention here, but stories that have become part of the fabric of the Perkins family. And they're not stories one has to relay to the other after a long day of work. In most cases, Billy and Celesta, and even the kids, are there together, sharing it all together.

It enriches their lives and truly makes basketball more than just a game.

"Basketball is always that thing that we always share together," Celesta said. "We both have that love of the game. It’s something that keeps us connected. We enjoy watching games together, talking strategies together and so it’s one of those things that it’s always been that bond that we’ve had in common."

Peter Huguenin and Nate Tenopir are a sports reporter and the sports editor for The Columbus Telegram. Reach them via email at sports@columbustelegram.com

The NCAA Division I Council voted Monday to approve an extra year of eligibility for all spring sport athletes who had their seasons canceled because of COVID-19, but the generosity will come with a caveat for seniors:

Spring Snapshot: Plenty of potential as Huskers reload on D-line

Spring Snapshot: Who follows Miller and Honas at inside linebacker?

Spring Snapshot: Who are the starters on the offensive line

From Melbourne to Columbus

In recent years, Australia has become somewhat of a basketball hot spot. NBA players such as Ben Simmons. Matthew Dellavedova, Dante Exum and …

The Perkins family poses for a photo at the Raider Fieldhouse recently. Billy and Celesta Perkins are joined by their children, left to right, Leialani, Tesema, Faitau and Malia. Billy, head coach, and Celesta, assistant, make up the Central women's basketball coaching staff.

Central women's players join the Perkins family on the court at the Raider Fieldhouse. Playing for a husband-wife coaching staff, the players say, brings a family atmosphere to the program.