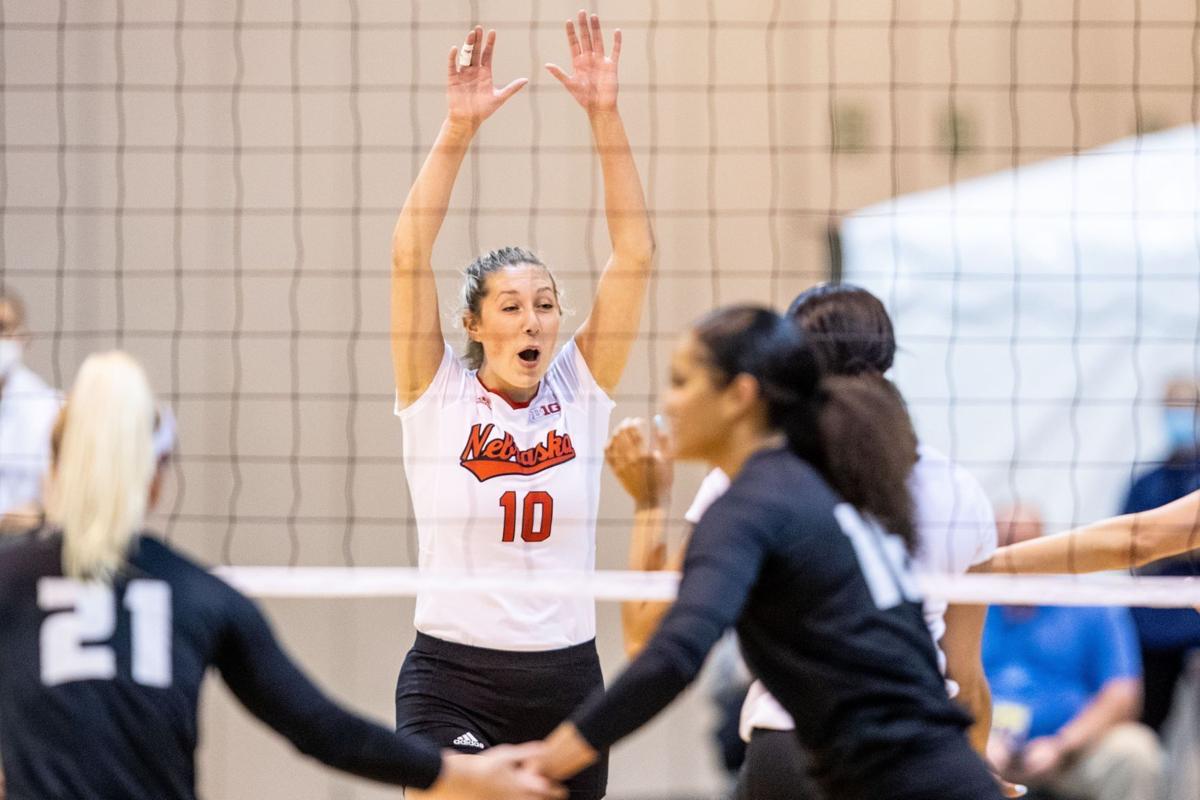 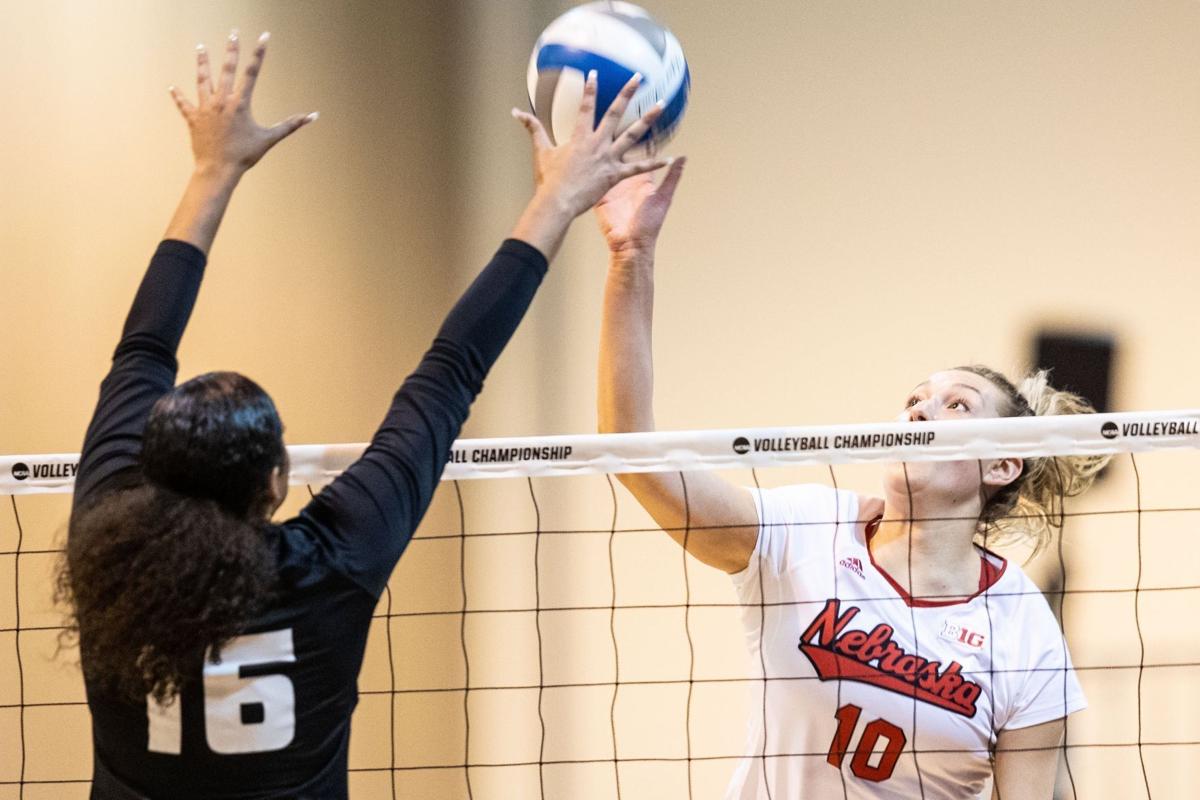 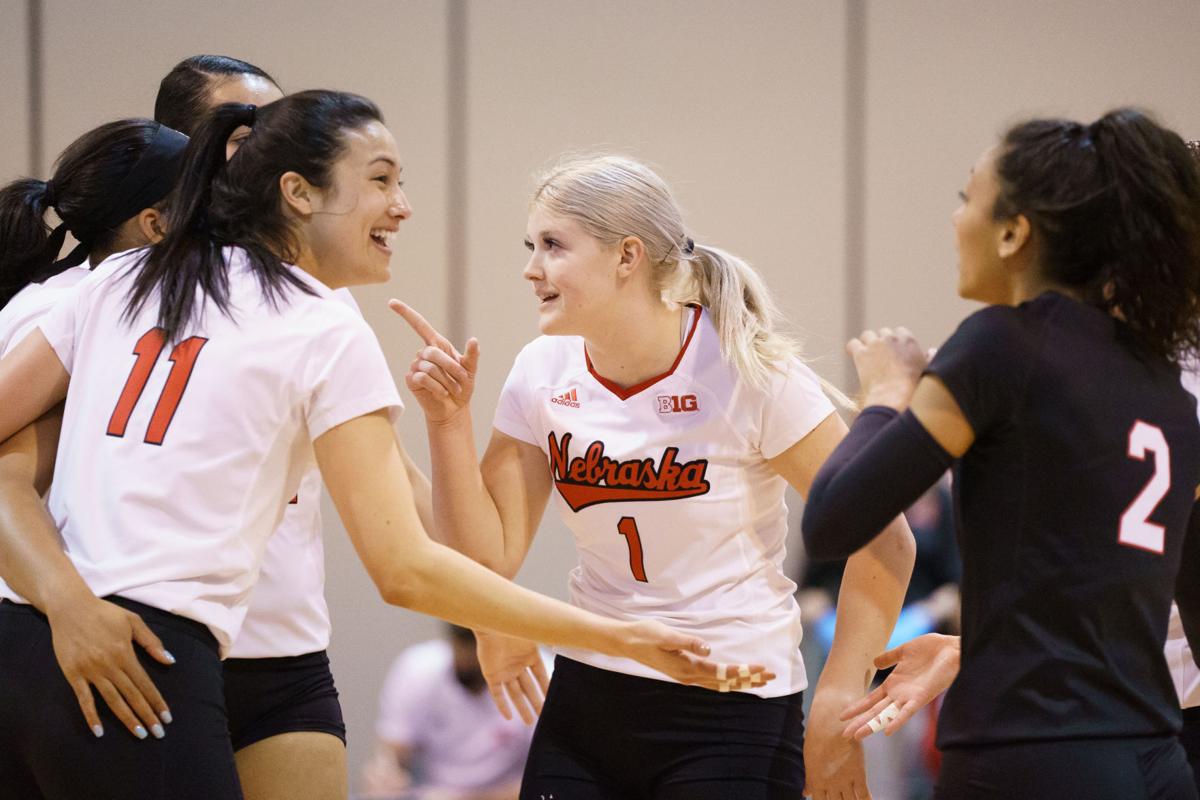 Nicklin Hames (1) and her Nebraska teammates celebrate a point against Texas State during the second round of the NCAA Tournament on Thursday at CHI Health Center Omaha. 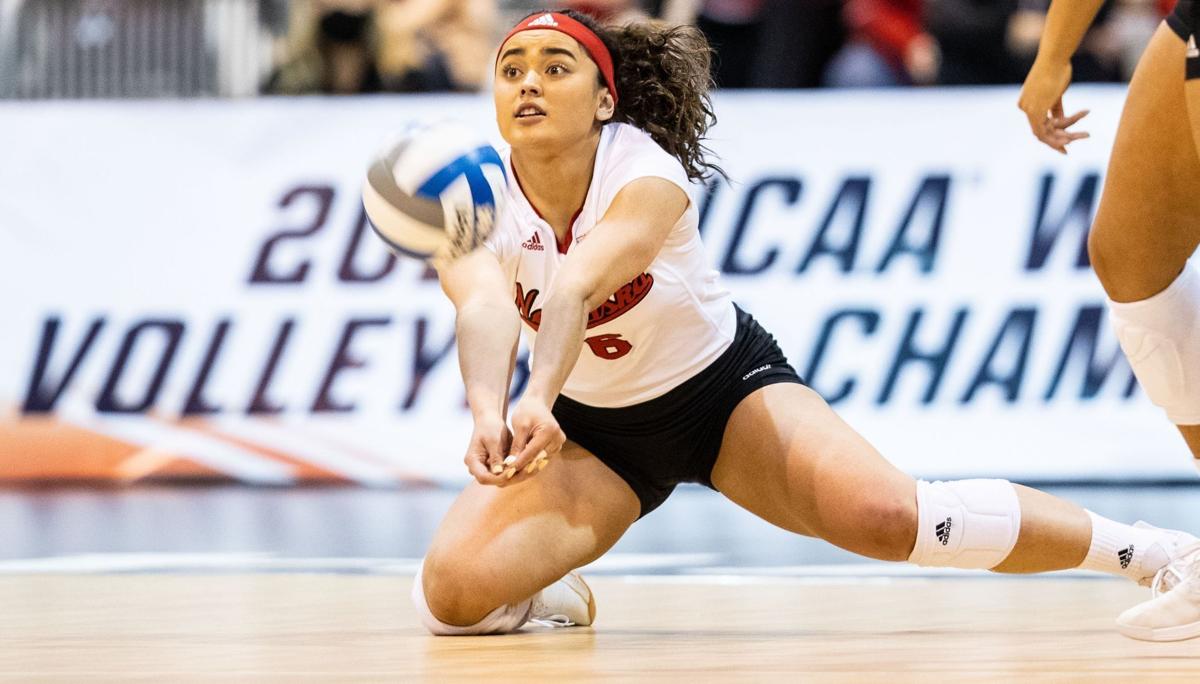 Nebraska's Kaylei Akana hits the ball in the second set against Texas State during the NCAA volleyball tournament Thursday at the CHI Health Center Omaha.

If the Nebraska volleyball team can get similar production from its middle blocker position that it did on Thursday, the Huskers should stick around in Omaha awhile.

Nebraska went 19 days between matches, but if that hurt the fourth-ranked Huskers, it was only briefly. The first set was tied at 10 before Nebraska dominated over the final 2½ sets and finished with a season-best hitting percentage (.398).

Why Nebraska? Out-of-state Huskers explain why they declined hometown offers to play in Lincoln

The Husker middles put on a show. At one point in the second set, Lauren Stivrins had nine kills on 11 attempts and Kayla Caffey seven kills on nine tries.

Stivrins finished with 10 kills on 14 attempts with a .571 hitting percentage. That’s the eighth time she's has hit over .500 in a tournament match.

In the first set, Stivrins had five kills on six attempts and was using all her shots — on a quick set, a tip over the blockers and the slide attack.

Caffey, the first-year Husker after a transfer from Missouri, had nine kills with a .667 hitting percentage. Caffey didn’t have an error until her 12th attempt, late in the third set.

For some teams, when an All-American like Stivrins rotates out of the match, the opponent can exhale a little, but not with the Huskers. When she’s out, on comes Caffey, and she can be just as dangerous. When Caffey jumps she hangs in the air, surveys the scene and decides where to unleash her attack. And sometimes it’s to an area of the court where the opponent isn't used to middles hitting.

Caffey and Stivrins have been at their best recently, and in the past three matches have combined for 56 kills with a .564 hitting percentage.

“The good thing is if we can run middle all six rotations, you can’t gang up on one of our outside hitters, and that’s where we’ve made major progress,” said Nebraska coach John Cook.

In the third set, Cook chose to rest Stivrins and play Schwarzenbach, and she gave the Huskers two more kills from the middle. Nebraska outside hitter Madi Kubik said the players were prepared for Stivrins to rest because she’s got a minor injury and the Cook may try to limit her some at the start of the tournament.

So after a few slow days in Omaha ahead of the tournament, just like that Nebraska (15-2) has advanced to the Sweet 16. The Huskers will play No. 11 Baylor on Sunday. The match time has not been announced.

The tournament is being played four months later than normal due to the pandemic, and using a different format in which all 47 matches are being played under one roof at CHI Health Center Omaha.

The first three rounds are being played in the massive convention center, where four “mini arenas” were set up. There were a few times during Nebraska’s match when the ball hit the ceiling and debris had to be cleaned up.

“Just some little things like that that you wouldn’t see in a real arena — a Creighton, Omaha, Lincoln,” said Cook of this unique tournament format.

Kubik said the sense of urgency that comes with playing an elimination match still made it feel like an NCAA Tournament.

One encouraging sign going forward in the tournament is how well the Huskers served at times. Nebraska had three ace serves, and in the second set Knuckles’ too-tough-to-handle serves got the Huskers out to a 5-0 lead.

“We thumped our serves,” Kubik said.

For Cook, the match wasn’t all positive. He didn’t like that Texas State was able to have a .185 attack percentage against the Huskers.

“Offensively, we did do well, but it just felt a little sluggish and discombobulated at times compared to my last memory (against Michigan on March 26), when we were humming,” Cook said.

Texas State played the most matches of any team in the country, finishing 31-9. 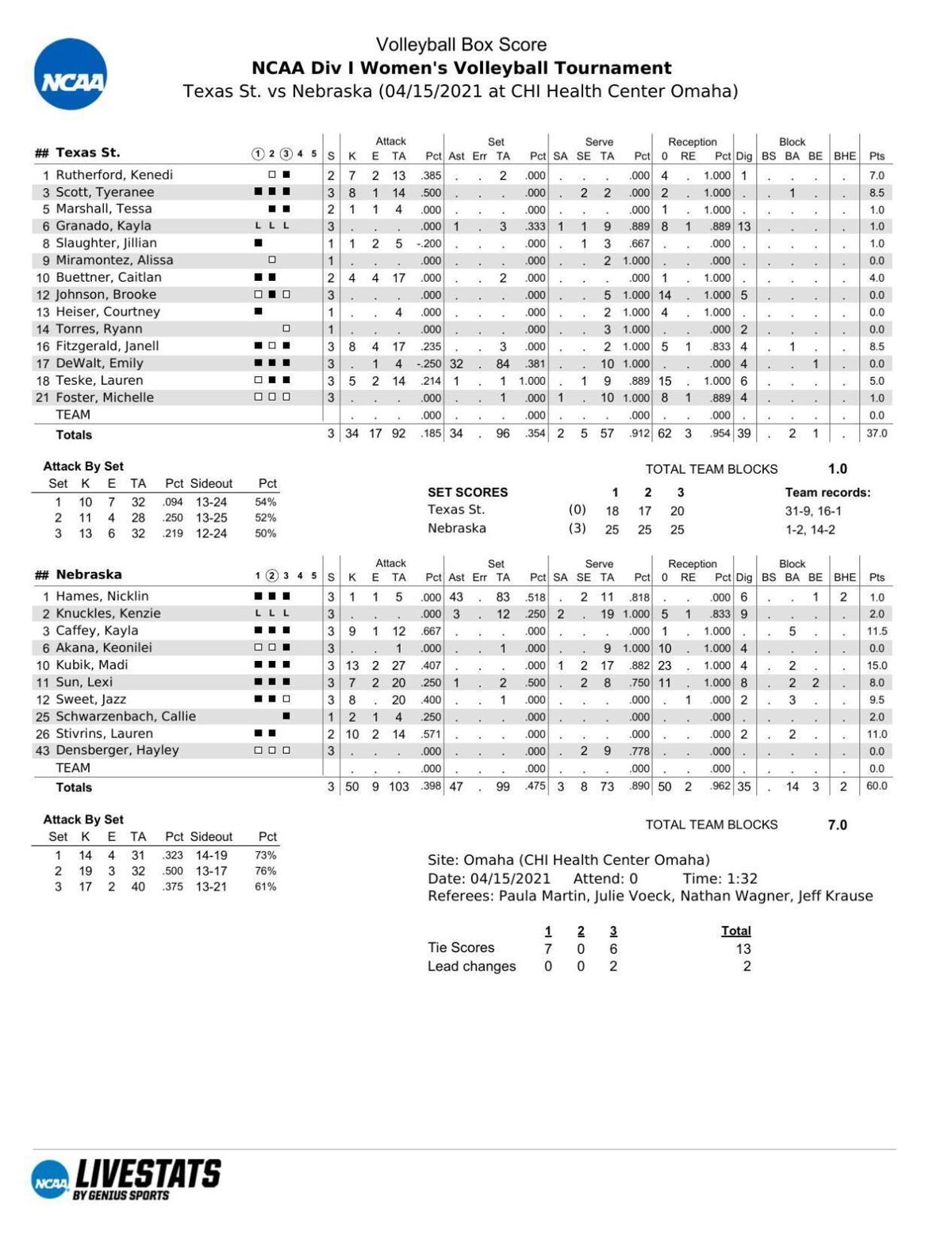 Weekend WR transfers close book on rough recruiting stretch even as confidence grows for 2021, beyond

Just how empty did Nebraska come up in receiver recruiting in 2018 and 2019? Take a look and see why Huskers are on rebuild No. 2 under Frost.

When the Huskers needed someone to come through at the plate last Saturday against Indiana, it was Hellstrom off the bench.

College basketball players are transferring at a record rate. What does it mean for the sport?

It began as an idea, a hopeful notion that might one day become something more.

Patrick Baldwin Jr., one of the nation’s top recruits, announced Wednesday that he will stay in his home state and play for his father at Milwaukee.

Ben Frederickson: Best area college basketball team this season could be one that worked the transfer portal best

Mizzou basketball coach Cuonzo Martin had a telling answer when asked recently what he thinks of this offseason’s transfer insanity.

Pondering the portal: What positions might Nebraska add to with its final two scholarship spots?

Here are a few possibilities, which surprisingly skew toward the Huskers’ veteran defense.

Arop averaged 19.4 points and 10.9 rebounds per game as a senior at Creighton Prep. Now, he's headed back to Omaha.

Mac Engel: Kim Mulkey’s exit from Baylor is a result of strain, fatigue and pettiness

Do not believe that Kim Mulkey becoming the new head women’s basketball coach at LSU is about her following her heart back to her native state.

Nicklin Hames (1) and her Nebraska teammates celebrate a point against Texas State during the second round of the NCAA Tournament on Thursday at CHI Health Center Omaha.

Nebraska's Kaylei Akana hits the ball in the second set against Texas State during the NCAA volleyball tournament Thursday at the CHI Health Center Omaha.