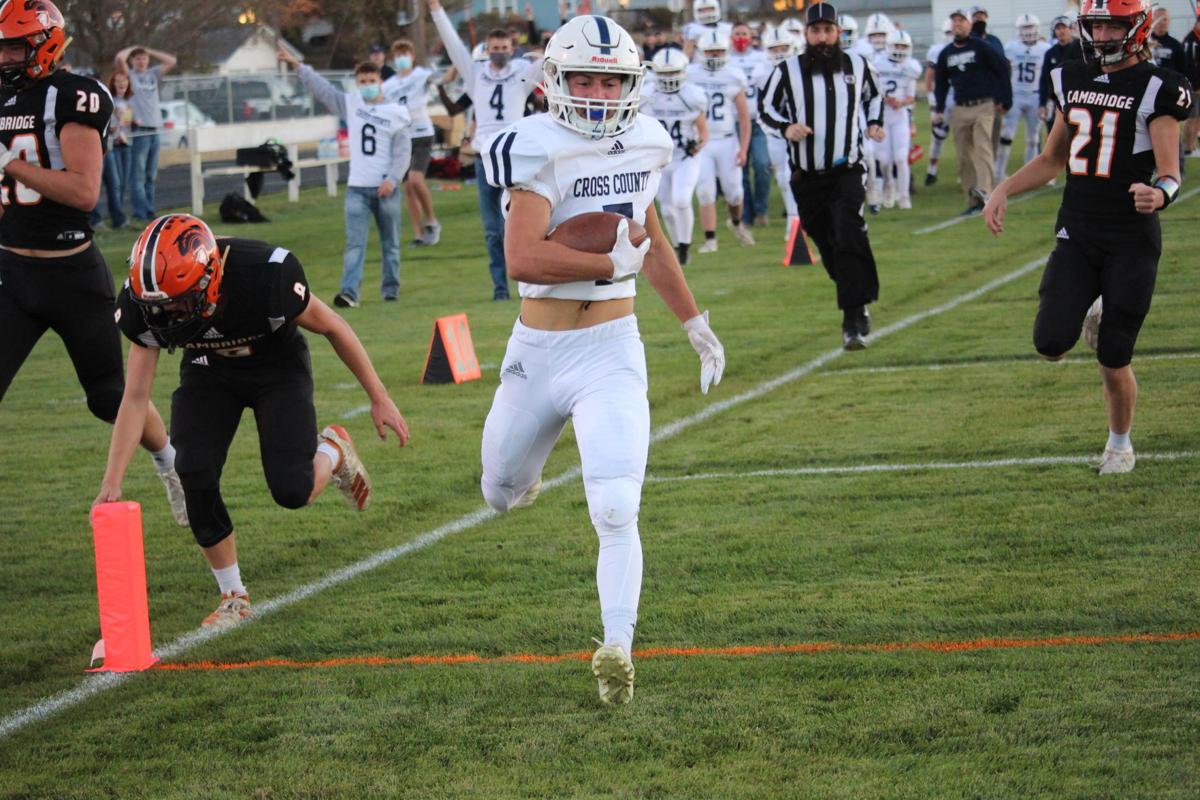 Cross County senior running back Isaac Noyd crosses the goal line for one of his 29 touchdowns this past season. Noyd and the Cougars were part of the best team in school history, but one that ended unfulfilled with a loss in the semifinals for the second straight season. 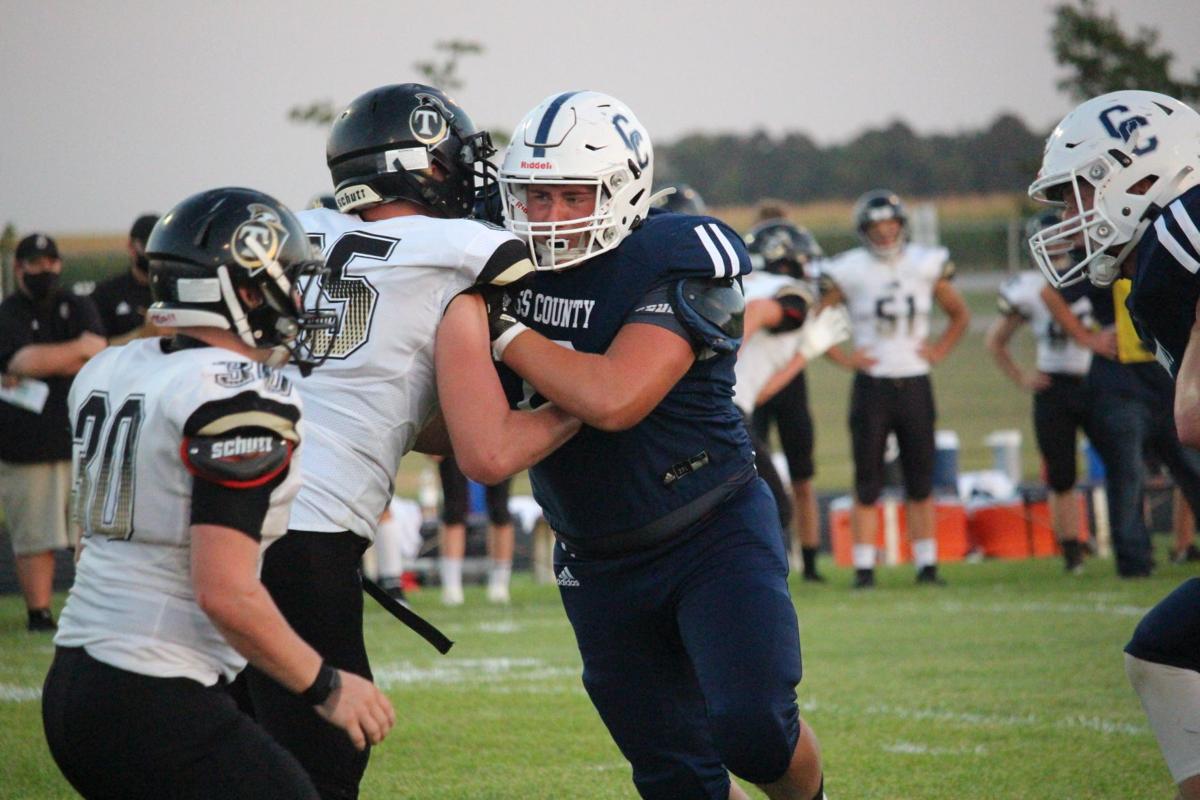 Cross County's Owen Powell engages a defender and opens a running lane in a game this season. Powell and his linemates opened holes for a backfield that produced over 5,200 yards and 84 rushing touchdowns. 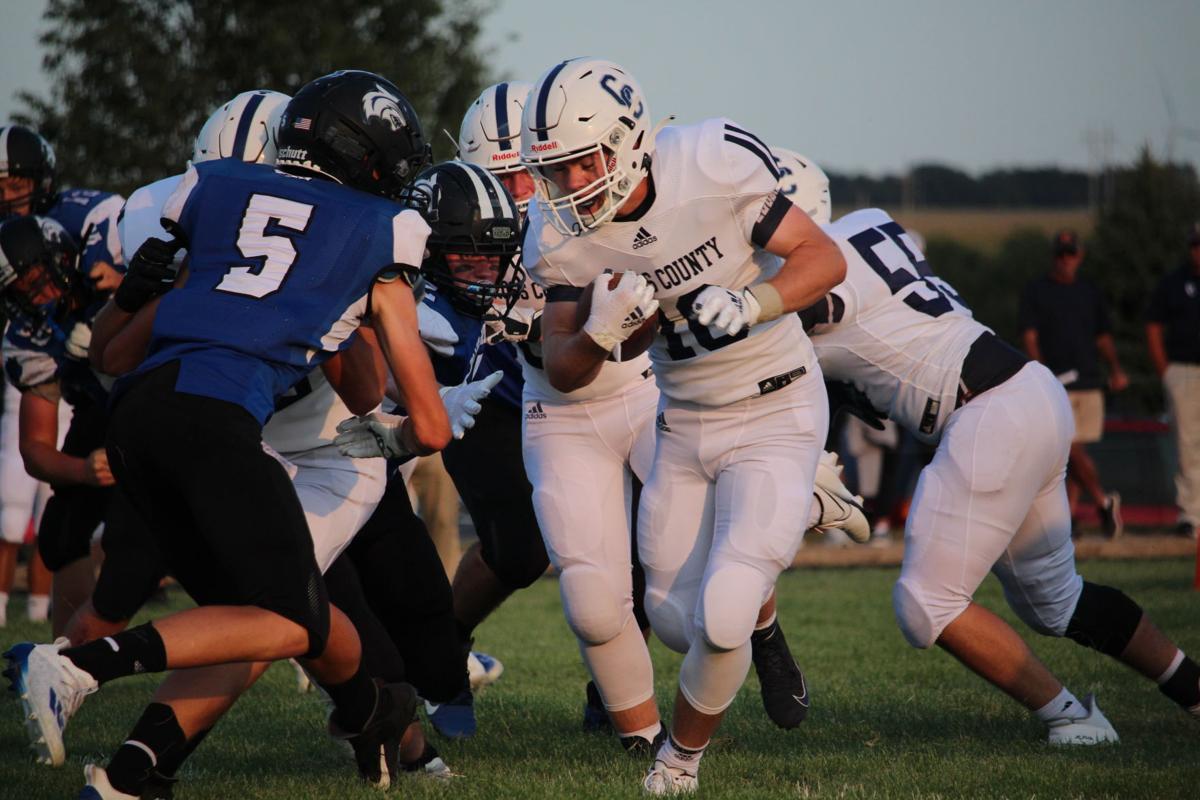 Cross County junior Carter Seim braces for impact in a game from this past season. Seim led the Cougars with 38 touchdowns on the year.

Cross County football followed up the most successful season in program history with an even better season in 2020. Better that is, except for one detail.

The Cougars reached the state semifinals a year ago for the first time in program history despite starting the year 1-4. Once they found their stride, the year felt destined for Lincoln. The eventual state champion ended the run, but clearly Cross County belonged.

With the amount of returning starters and returning talent, the Cougars figured to be back in the mix for even more in 2020.

This time there was no delayed start - Cross County throttled opponents every week, won all eight of its regular season games by at least 20 points then won three playoff games by 38 or more.

But back in the semifinals the Cougars suffered another season-ending defeat and settled for an 11-1 mark. Cross County was the best its ever been in every significant measure except for that one detail - the season ended at the exact same spot as a year ago.

Yet, how the season was met head on, how the team embraced the challenge of expectations and broke through in every regard is how coach Hayden DeLano will remember this team. A state championship may yet be within reach, but in terms of player-for-player, position-for-position, offense, defense and special teams, the 2020 Cougars did things in all areas no other previous group can claim.

"I’m really proud of all the team and individual accomplishments these boys had," DeLano said. "They put together a historically great season for our program and community. A lot to be proud of."

Pride includes 684 total points, an average of 57 per game, an average margin of victory of over 43 points, a shutout, two teams held below double digits, two 2,000-yard rushers and, at one point, the most rushing yards for a team anywhere in America according to MaxPreps.com.

Cross County ran through the regular season never seriously challenged. A 56-36 win over Clarkson/Leigh in Week 2 and a 28-0 victory over Howells-Dodge in Week 4 were as close as any team came.

Following a 56-6 rematch win over Clarkson/Leigh in the playoffs, Cross County earned the 2 seed and crushed Cambridge 54-16 ahead of a blowout of Elm Creek 62-6.

Cross County led Burwell 22-0 before the semifinal matchup was eight minutes old but found itself up just 30-22 at halftime. The Longhorns tied it in the third, took the lead in the fourth and denied Cross County on a 2-point conversion that proved to be the game-winning play in a 37-36 final.

The trip to the playoffs was the 13th in school history but just the fourth time the Cougars had won a game. Back-to-back semifinals appearances are the longest playoff runs by two games.

But of course, when one follows the other it can be hard to appreciate the second. DeLano hopes his group can see the proper perspective of his team's place compared to the rest of Cross County history.

"The expectation was a state title," DeLano said. "We fell short of that. So, no, (we were) not fully (satisfied). Doesn’t diminish the progress we have made though. The boys definitely achieved a lot."

Even in the midst of suffering the only loss of the season, DeLano felt it was the highlight. Burwell has been in the championship game five out of the last six seasons and established itself as the current D-1 dynasty everyone else is chasing.

"(The highlight was) being in position to win a semifinal game against a phenomenal program," DeLano said. "We gave ourselves a chance. That is what we set out to do, just didn’t finish."

Noyd rushed for 2,146 yards and 29 touchdowns on 178 carries. Rystrom led the team in tackles with 122, Haug had two rushing touchdowns, Kelly was part of an offensive line that produced two 2,000-yard backs and Powell had 14 tackles.

Graduating seniors are always a tough goodbye but moreso for DeLano who will say goodbye to the first class he's coached freshmen through senior.

"They’re the reason we have what we have here at Cross County," DeLano said. "They’ve been all in for four years; given everything they have to our program and the team. They’re mentally, physically and emotionally drained. That’s all a coach could ever ask for."

The Cougars will return 12 juniors, five sophomores and 14 freshmen. Junior Carter Seim will be the one who grabs the most attention next season. Seim finished with 2,114 yards and 38 touchdowns on 146 carries.

DeLano is optimistic about the future though there are more unknowns than a year ago. If possible after the pain wears away, the Cougars can be appreciative of another fun, noteworthy season. DeLano said they should also feel secure enough in what they've done to realize they're still in position to do more.

"They need to be proud of where they’re at, but we have not accomplished our ultimate goal," he said. "It’s back to work now. We need to continue to get bigger, faster, stronger. Biggest offseason thus far."

Biggest because perhaps now is when DeLano will learn if the pieces are in place to become a powerhouse program - to reload rather than rebuild.

"Our goal is to be 2021 state champs," DeLano said. "We believe we have the players for that, but now we just have to continue to grow as a program."

Peter Huguenin and Nate Tenopir is a sports reporter and the sports editor for The Columbus Telegram. Reach them via email at sports@columbustelegram.com

Bad news has been the constant for Columbus High boys basketball through six weeks of the current season.

Twin River senior Emilee Spitz has done just about everything in her softball career. Whether it's in the circle, at the plate or out on the d…

The Scotus Central Catholic girls took advantage of missed free throws, created crucial turnovers and added perhaps one of their most importan…

Columbus youngsters get an education at Millard South

Area Hoops: Graham and Kozil combine for 30 in win

The Scotus Central Catholic offense began to fade early in the second half, due primarily to a major injury, and Scotus faded over the final 1…

Cross County senior running back Isaac Noyd crosses the goal line for one of his 29 touchdowns this past season. Noyd and the Cougars were part of the best team in school history, but one that ended unfulfilled with a loss in the semifinals for the second straight season.

Cross County's Owen Powell engages a defender and opens a running lane in a game this season. Powell and his linemates opened holes for a backfield that produced over 5,200 yards and 84 rushing touchdowns.

Cross County junior Carter Seim braces for impact in a game from this past season. Seim led the Cougars with 38 touchdowns on the year.