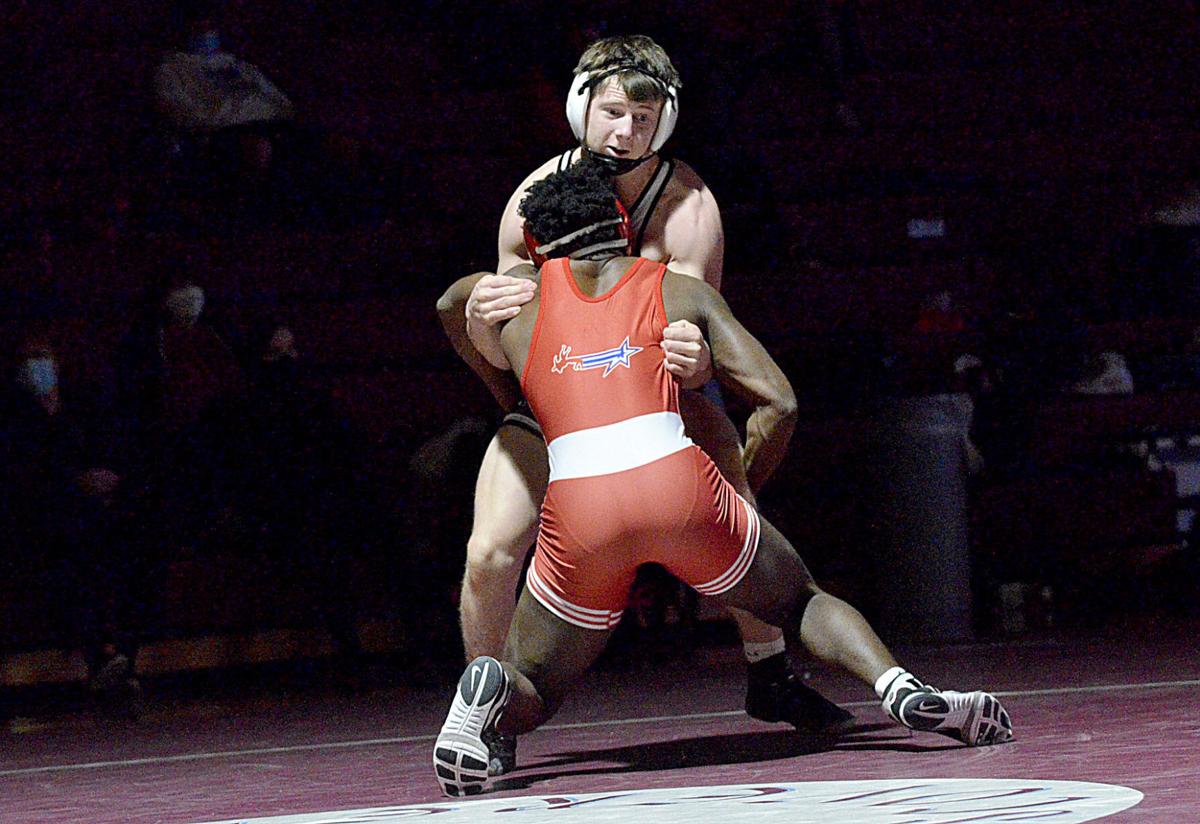 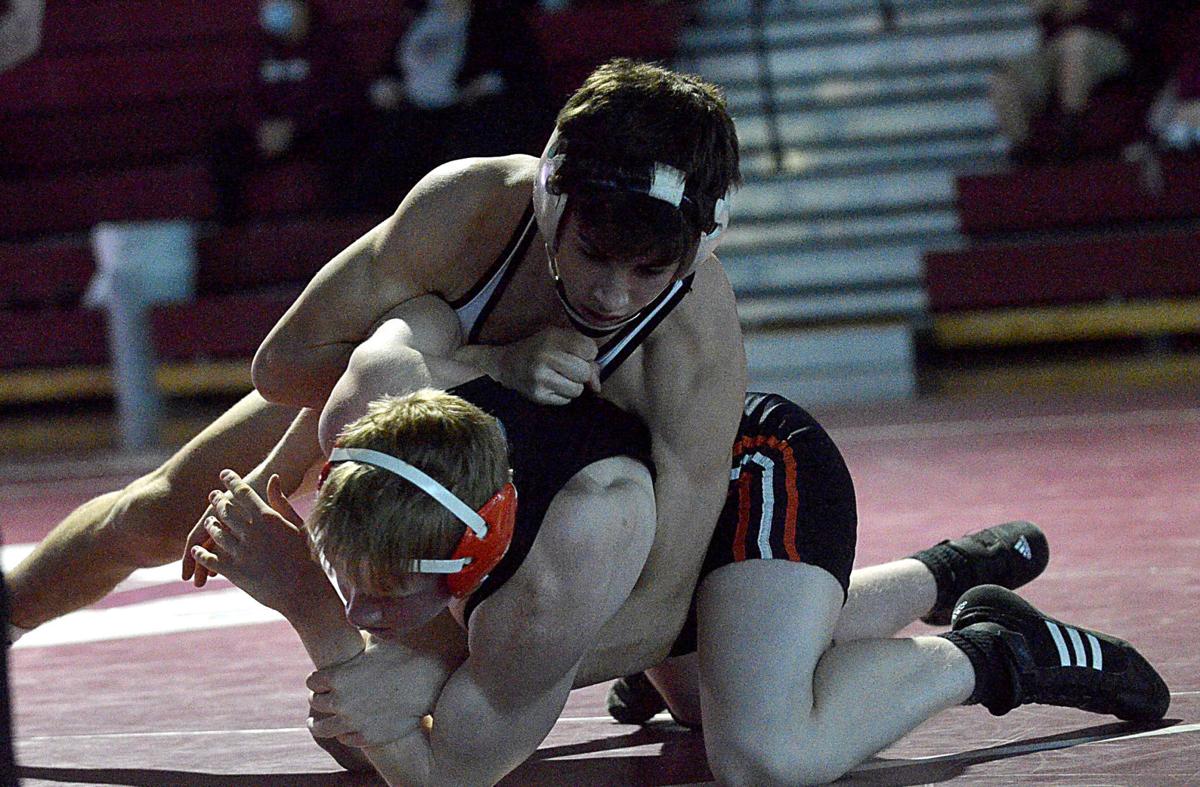 CHS sophomore Caydn Kucera controls his Hastings opponent in Wednesday's dual with the Tigers and No. 1 Millard South.

The Tigers gave up three forfeits while the Discoverers were open at 138 pounds and 182. That left just nine matches - five of which were won by CHS.

Loaded Millard North was a different story, only two from CHS came up with victories and one of those was an injury forfeit.

"They're good. They've got a talented team, they're well coached, they're doing a lot of good things," Columbus coach Adam Keiswetter said. "On our side, the things we want to do better are the little things - little technical errors that we're making, positions we're getting into. If we can execute the techniques we're looking for, and can be a little stingier on defense. It might not make the difference to winning and losing a match, but in the end, it works us toward where we need to be."

Perhaps the most meaningful match of those four was Delano taking down NSWCA No. 6 Cameron Brumbaugh. Delano built a 5-0 lead with a first period takedown, second period escape and another takedown. Brumbaugh answered back before the second period was over and scored his own escape and takedown. He started on the bottom in the third and escaped again but Delano held off the rest of his shots and took the 5-4 win.

Bice won 12-4, Cerny won by pin with 32 seconds left in the first period and Kucera needed a minute and 24 seconds for another pin and a 25-0 lead.

Hastings won the next four but only marginally cut the deficit because of one forfeit, two decisions and a major decision. That made it 25-16 with five matches remaining.

Levi Bloomquist and Blayze Standley accepted forfeits to make it 37-16 and put the dual out of reach. Hastings accepted one more forfeit, Justin Gaston won by pin at 195 then Class B No. 3 Blake Davis took 220 by fall in just 55 seconds for the 43-28 final margin.

Millard South has won the past two state titles, five of six at the state tournament and five of the eight state dual tournaments that have been held.

Bice won at 113 pounds in a pin that took just 50 seconds. That weight class is one of just two positions where Millard South is not ranked in the lineup.

Blayze Standley beat 170 No. 6 Caeden Olin but on an apparent bathroom break. Olin left the gym to seek relief and came back just late of the injury timer running out.

Millard South won four matches head-to-head by pin and two others by technical fall. The Patriots also had three decisions and three forfeits.

"A lot of those matches were us making the same error not just once, but two or three or four times," Keiswetter said. "It's frustrating to watch on the sidelines, but it's their career. It's their job to realize what the mistakes are and try to fix them in practice. On the positive side, it gives us things to see on film and work on."

Keiswetter highlighted Cerny in a 7-2 loss against Caleb Coyle, the returning 120-pound state champ. Cerny escaped the bottom to start the second and escaped another takedown before the period was over. Trailing 4-2, he gave up an escape and a takedown in the third.

"It was, in my eyes, the best match of the night, and it was in a losing effort," Keiswetter said. "He wasn't scared. He went out there and he attacked him. All those positions that could have been takedowns, he fought it off and squared up. He was doing the right things."

Hastings was also a returning champion from a year ago.

"In the history of Nebraska wrestling, this has never happened before. We hosted the Class A and Class B state returning state champs," Keiswetter said. "We seek out the best and have the best teams face our guys so they know where they're at if they want to be nationally ranked, a state title contender and things like that. Those are the types of wrestlers they're going to have to be to achieve those things. It's a great day for our guys to wrestle that level."

Columbus youngsters get an education at Millard South

CHS sophomore Caydn Kucera controls his Hastings opponent in Wednesday's dual with the Tigers and No. 1 Millard South.