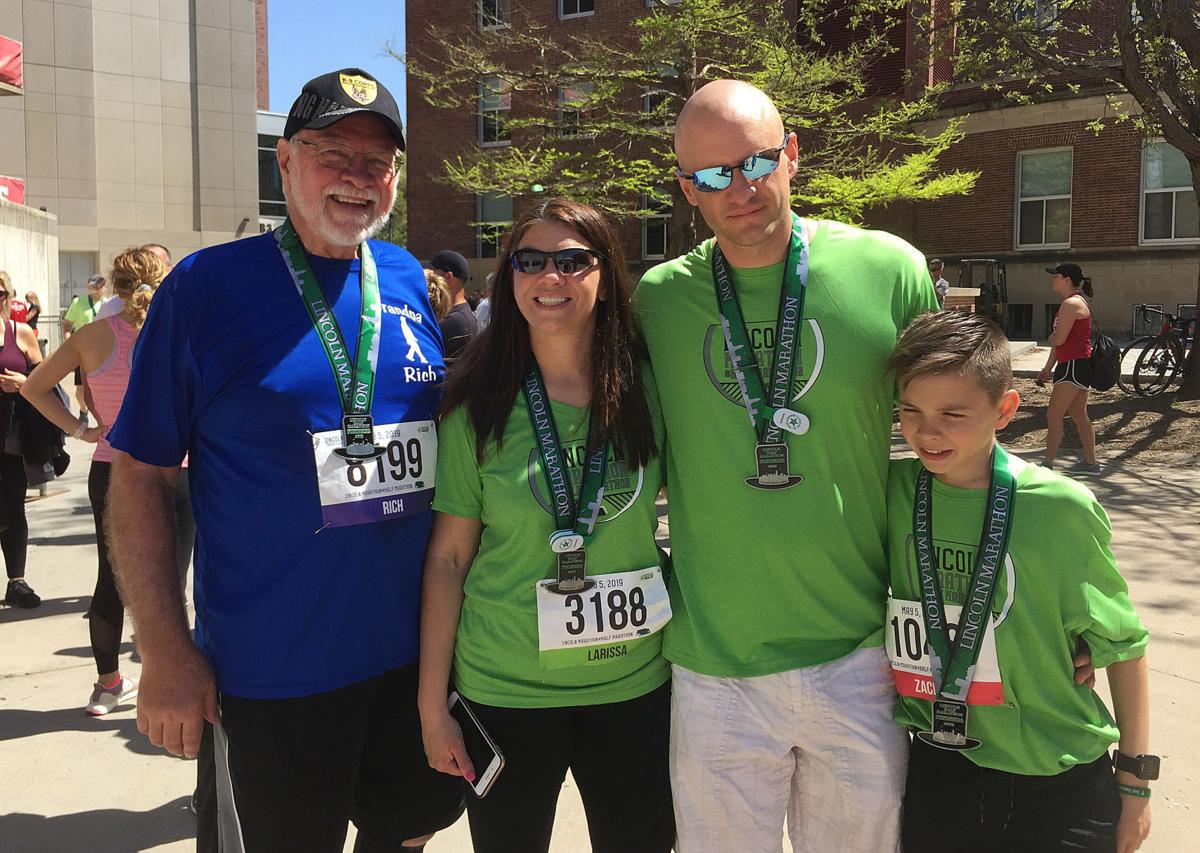 Rich McPhillips, left, his daughter Larissa, son-in-law Andy and grandson Zach stop for a photo after completing the 2019 Lincoln Half Marathon. The event has become a tradition for the family, completed this year on their own. 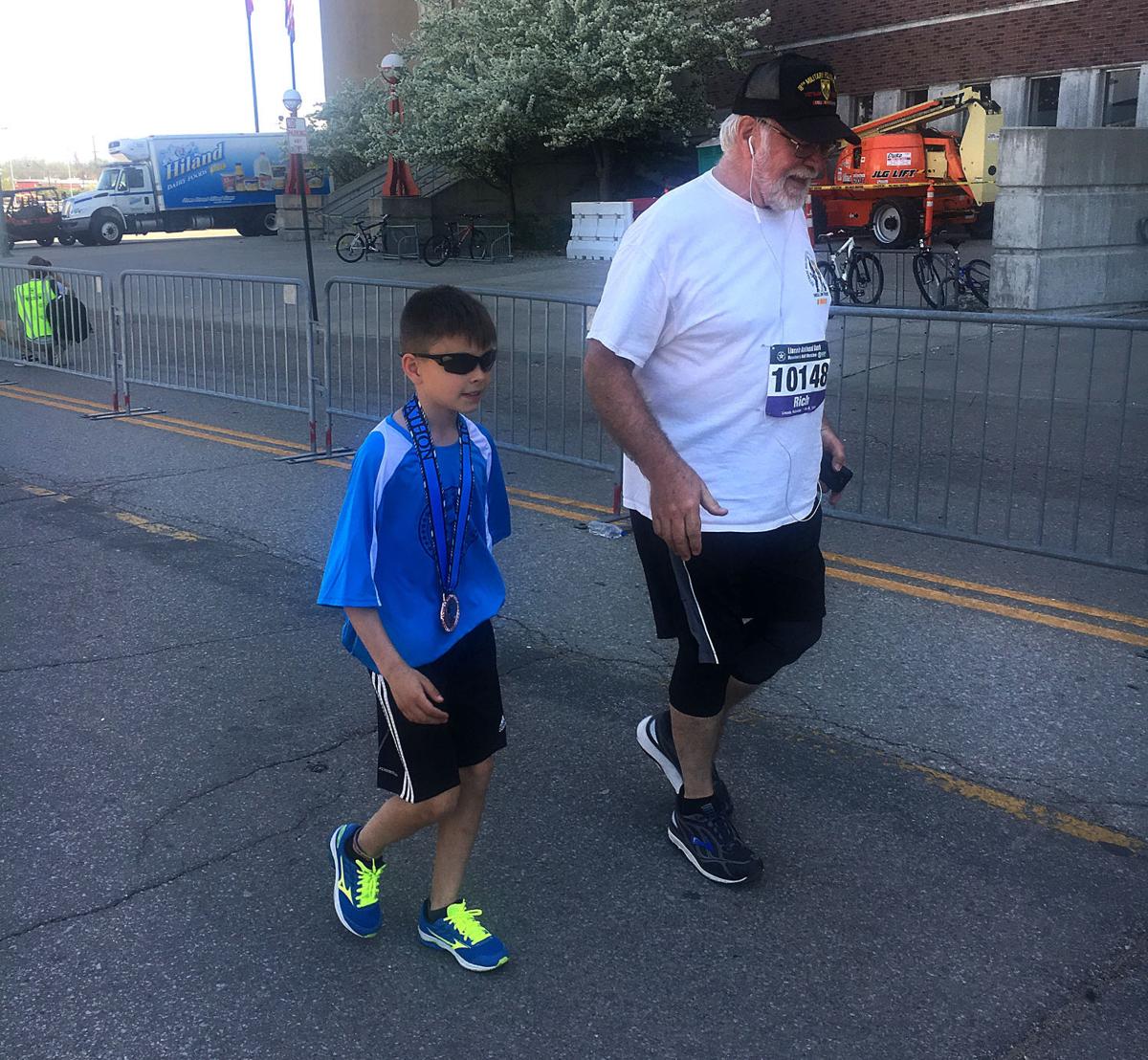 Zach Woosley walks his grandpa Rich McPhillips to the finish line at the Lincoln Half Marathon a few years back. 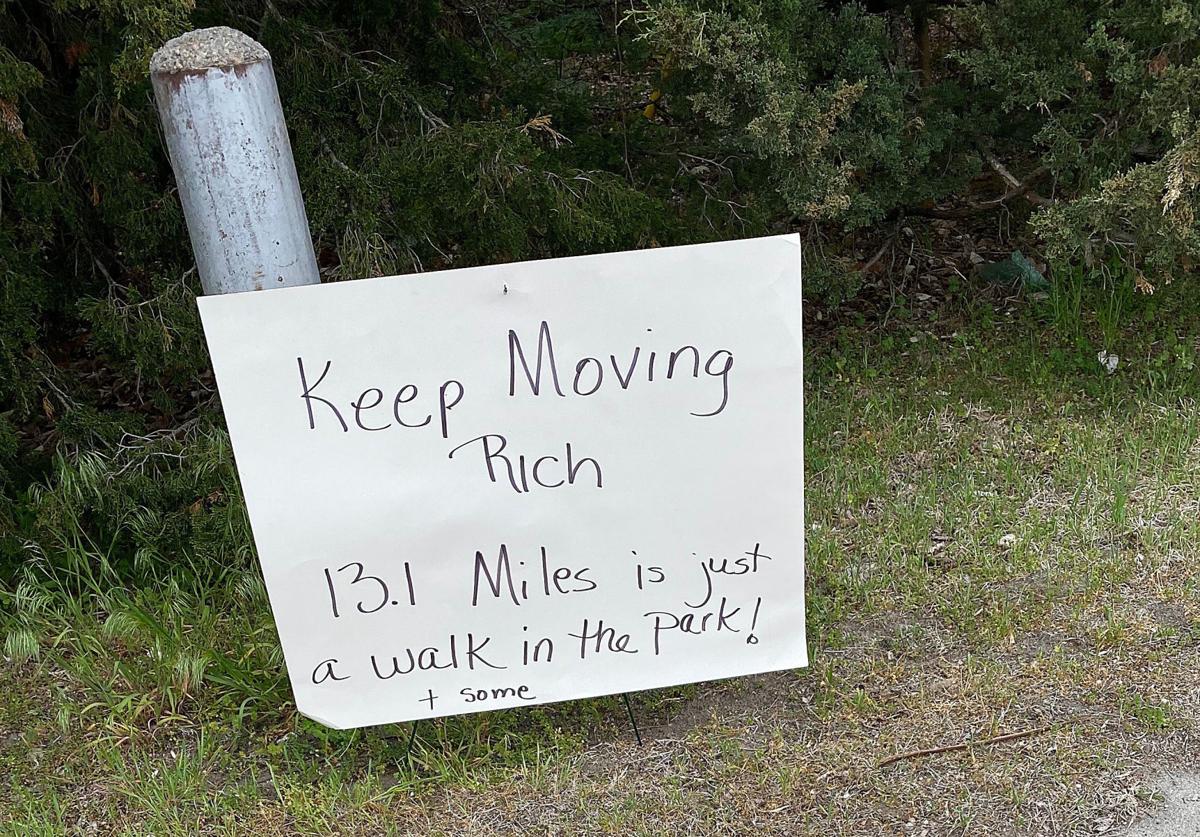 Rich's wife, Barb, made signs of encouragement along the half-marathon route he completed in Columbus on May 3.

Rich McPhillips complete the Lincoln Half Marathon a month ago with signs of support along the way and his wife, Barb, there to cheer him on at the finish line. It had many of the same elements the walk does every year except for one major difference: McPhillips completed his 13.1-mile trek in Columbus.

Following the cancellation of the yearly event due to the coronavirus pandemic, marathon organizers encouraged regular participants to take part in the run/walk on their own at their own locations. McPhillips, who has made it a family affair, returned to his home in southwest Columbus in just under four hours.

He was one of the hundreds of regular participants who did the same, recording their time and received a t-shirt to go with a finisher medal. His daughter's family in Lincoln did the same.

It was thanks to that daughter, Larissa, that Rich began the tradition seven years ago in a family that now has three generations involved.

"It's become a family thing to do," he said. "Next year, we hope to be back in Lincoln so we can do it all together again."

McPhillips started thanks to the encouragement of his daughter, Larissa Woosley, who was a runner in high school and returned to the lifestyle after her first child.

She runs the Lincoln Half with her husband, Andy, son, Zach and for the first time this year, daughter, Malia. Barb and another Woosley daughter, Macy, typically maneuver around Lincoln at different parts of the route to try and cheer on the group.

"I enjoy watching them. I'm their biggest fan," Barb said. "It's exciting for me to do. (Driving around Lincoln) is my marathon."

McPhillips started with about a half-mile each day when he first began training. A his first half marathon he had his brother Bob beside him. That was his fastest time.

It's been increasing slightly ever since for the 69-year-old independent distributor of products for Conklin Company, Inc. and Vietnam War Veteran. But the time he posted on May 3 when he had a route into Pawnee Park and around Wagner's Lake was eight minutes better than his mark from 2019.

Barb waited until he left for the walk then placed signs along the route for encouragement. She also met up with him three-quarters of the way through to replenish his water and give him a Gatorade.

She and a neighbor created a finish line for him, of sorts, as he neared the end.

In Lincoln, the Woosleys ran on April 25. Andy and Malia stuck together since it was Malia's first time. Zach, as has become par for the course lately, left everyone in the dust.

He walked the route with his grandpa when he was 9 and did the half the very next year. Since then, he's gradually been climbing the 12-and-under and 14-and-under leaderboard. He was tops at 14-and-under a year ago.

He had his sights set on beating the course record in 2020 before the cancellation. Regardless of what time he ran on his own, that wouldn't be considered for the record book. And he didn't like his first time anyway.

“My grandson was not pleased with his time, so about 10 days later, he ran another half marathon to improve his time," McPhillips said. "He’s real competitive."

That competitiveness will have a chance to shine next year when Zach joins varsity cross country at Lincoln Pius X.

For his grandpa Rich, he said the event, and leading up to it, is a chance for everyone to shine regardless of age or ability.

“If they don’t want to do a marathon, I would just encourage everybody, if they’re physically able to, to get out and do some type of exercise. It definitely helps you mentally as well as physically," McPhillips said. "If you haven’t done anything significant in a while, don’t try to go out and walk five miles the first day. The big thing is, as they say, start slow and do it consistently."

That was his method though Woosley wasn't certain her suggestion would be enacted upon when she initially made it.

"I wasn’t really expecting him to say yes, but I’m very happy he did," she said. "It’s kept him active and gets him out enjoying some exercise."

She made him a workout plan of sorts to train with at the start of 2020. He used that to be ready for Lincoln and then what eventually turned into a solo event.

She and the family were thinking about him that morning, anxious to hear how he did. When it was over, Woosley was impressed with how her father finished considering there was no crowd for support and no aid stations along the way.

It was a way for the family to be, in the common saying that has been adopted over the last few months, together apart. But of course, everyone is planning on a return to normalcy in 2021.

“It’s fun to finish and go back out and cheer my dad on in a few spots. It’s a really cool event. My sister Sarah has come back for it a couple of times, my brother Andy was planning on coming back this year, it’s cool to see so many different athletic abilities and ages out there," Woosley said. "We’re all doing the same thing, starting and finishing at the same place; it warms my heart."

BEAST Gym came away with quite the medal hall thanks to five lifters who competed at the inaugural Ed Coan Classic in Omaha on June 27.

The NFL plans to play the Black national anthem before Week 1 games. Hear the anthem here.

Additionally, the league is working collaboratively with players to recognize victims of systemic racism throughout the season.

Cornerstone Seniors beat up in road losses to Hastings

It's been a long summer of waiting for high school football players across the state of Nebraska, but their patience finally paid off as teams…

For some, it was the last hurrah. For others, it was an introduction. But all involved from Scotus Central Catholic agreed that the Class C bo…

Rich McPhillips, left, his daughter Larissa, son-in-law Andy and grandson Zach stop for a photo after completing the 2019 Lincoln Half Marathon. The event has become a tradition for the family, completed this year on their own.

Zach Woosley walks his grandpa Rich McPhillips to the finish line at the Lincoln Half Marathon a few years back.

Rich's wife, Barb, made signs of encouragement along the half-marathon route he completed in Columbus on May 3.