BROKEN BOW - The Platte Center Post #283 Bank of the Valley Lakeview Seniors earned third place at the Nebraska American Legion Class B Senior Playoffs for the second straight year after a 14-6 loss to Waverly Wednesday at Paul Brown Field in Broken Bow.

The second inning proved to be decisive as Waverly scored 11 runs against Lakeview pitchers Caleb Sloup, Eli Osten and Kolby Blaser. It battled back with five runs in the third to cut the deficit to 12-6, but a run in the third and run in the fifth sealed the win for Waverly, who advanced to the state championship game.

"We made it to championship Wednesday. Great tournament. Just came up a little short today. We had one inning that kind of got away from us," Lakeview head coach Travis Tessendorf said. "I give credit to them. They're a well coached team. They hit the ball really well. Their third baseman (Drew Miller) just hits a ton. He's a high-caliber ballplayer and we just couldn't get him out (today)."

Platte Center scored six runs on eight hits and three walks. Sam Kwapnioski hit 2 for 3 with one RBI and one run. Kolby Blaser posted one hit and drove in two runs. Turner Halvorson and Jordan Kracl ended with one hit and one RBI each and Brenden Sloup also tallied one RBI.

On the mound, Caleb Sloup pitched for the Seniors for the first time this season earning the start. He pitched 1 and 1/3 innings allowing three runs on two hits with two walks and two strikeouts.

Osten pitched in relief and Sloup and allowed eight runs on seven hits in 1/3 inning of a pitched. Blaser was the third pitcher to throw in the second and ended the game pitching 1 and 1/3 inning with two runs on five hits. Kwapnioski was the final Lakeview pitcher, throwing 1 and 2/3 innings. He allowed one run on two hits with three strikeouts.

"Our pitchers did well. Caleb Sloup hadn't pitched all year for us and threw him out there to try to keep them off balance and did a good job for about an inning and a half and then the wheels kind of came off a little bit," Travis said.

Lakeview opened the game with an aggressive approaching Waverly pitcher Payton Engel, who pitched against it on Saturday. Adam Van Cleave singled on the first pitch of the game. The center fielder advanced to second base on a sac bunt by Cooper Tessendorf and a dropped third strike against Kwapnioski.

Kolby Blaser popped a sac fly to left field to score Van Cleave and put Lakeview ahead 1-0. Waverly tied the game in the bottom half on an RBI double and Jarrett Ballinger homered on the first pitch of the second inning against Caleb to put Waverly ahead 2-1.

Waverly hit a two-run double to left to make it 9-1 followed by four straight singles, leading to three more runs. In total, Waverly sent 17 to the plate in the inning.

"We made good pitches and the ball was between third and short, over our heads. We play up, they hit over our heads. We play deep and the dropped in front of us," Travis said. "That's just the game. You got to give them credit for doing that because we did (yesterday) to Hickman, who's arguably one of the top teams in the state. Anyone can beat anybody, especially at this caliber up here."

Travis said he challenged the team in a huddle following the second inning and Bank of the Valley responded with five runs to cut the deficit to 12-6. After reaching on a fielder's choice, Van Cleave advanced to third on a wild pitch on ball four to Cooper. Kwapnioski drove in Van Cleave on a hard hit single to right.

Blaser drove in his second run of the game on an RBI single to score Cooper. Osten reached on an error to load the bases and Halvorsen singled to score Kwapnioski to make it 12-4. A Kracl RBI single and a Brenden RBI ground out concluded the scoring in the frame.

Waverly plated a run back in the bottom half on an RBI sac fly to make it 13-6. In the fifth, Ballinger doubled to the wall in right field. Following a strikeout, Landon Oelke grounded a single into right past a diving Kracl for the walk-off hit.

Lakeview finished the season 24-3. The team's core made their mark on the program, leading the Seniors to back-to-back third place finishes in their first two state tournaments in program history.

Platte Center accomplished those feats lining up against Class B schools who have high school baseball like Waverly, who was the NSAA state runner-up in the spring season.

Hickman, who Lakeview defeated 15-6 on Tuesday, won the Legion state title last year and competed against Waverly for the state title this year. It featured players from Norris, who entered the NSAA tournament as the No. 1 seed following a 20-6 season.

"We're playing Waverly and Hickman that have three times the size of us. They're full-time coaches. They have quality programs. They have their own facilities and stuff like that," Travis said. "We have four dads coaching that have other jobs beside this. We practice when we're off work. It's a completely different scheme to what we're playing here. We're not here to say that we don't belong here. We do. This team belongs here and they proved it to be here and just so proud of them all the way."

Although it wasn't the ending it hoped for, Travis said they had a great season.

"Proud of the boys, especially for the seniors," he said. "We go from not having a program at all a few years ago to twice finishing third at state. It's been a privilege and a honor to coach these guys."

SOUTH SIOUX CITY - The hardest outs to get in a baseball game is the final three. That proved to be the case for the Cornerstone Insurance Gro…

LINCOLN - In a season full of accomplishments, the Cornerstone Insurance Group Columbus Seniors saw its season end Tuesday in the Class A Nati…

SOS Rebels stave off elimination with 14-5 win over Valentine

The Albion Post #162, Shelby-Osceola-Stromsburg Rebel and Twin River Titan Seniors concluded its respective regular season this week ahead of …

Cornerstone faces familiar foe in first round of state tournament

For the first time since 2018, the Cornerstone Insurance Group Columbus Seniors are playing in a Nebraska American Legion Class A state tourna… 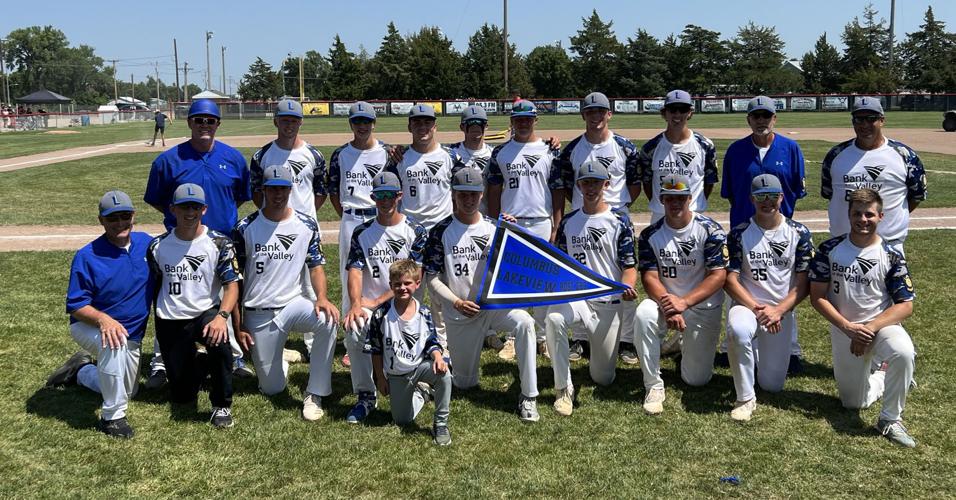 The Platte Center Post #283 Bank of the Valley Lakeview Seniors pose for a team picture Wednesday at Paul Brown Field in Broken Bow. 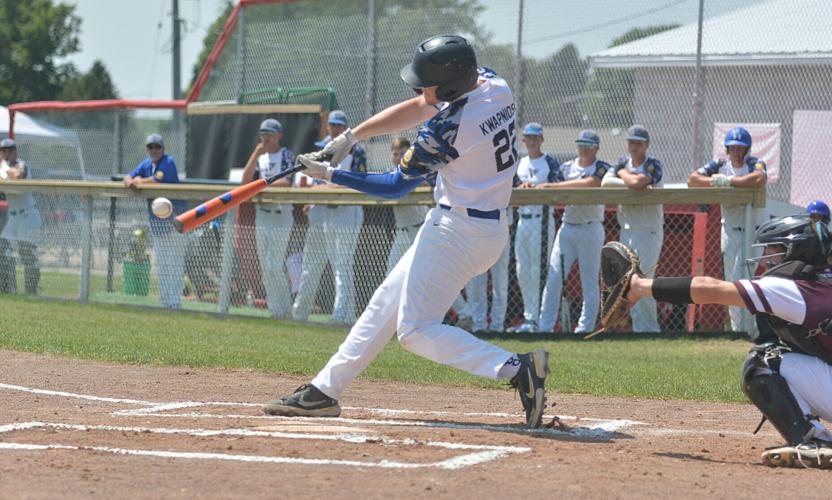 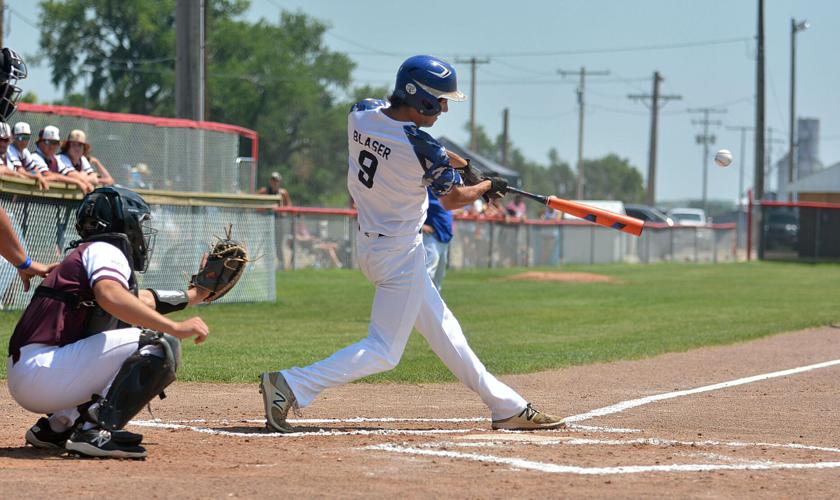 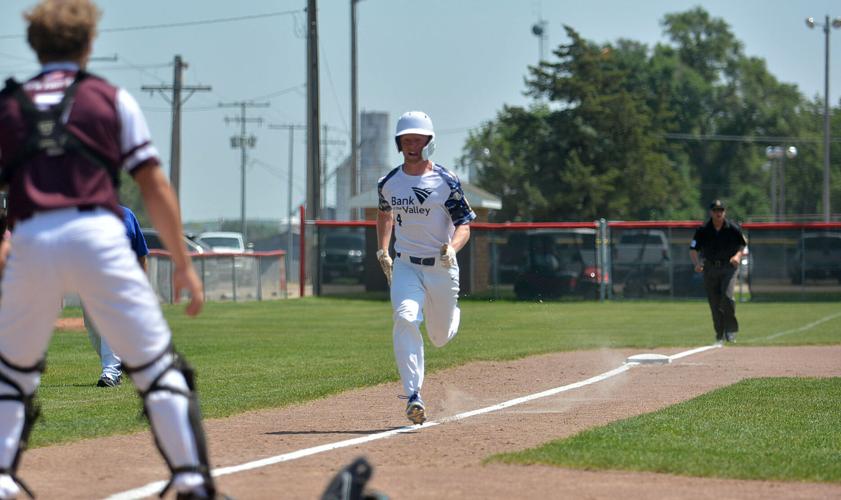 Bank of the Valley center fielder Adam Van Cleave runs down the third base line to score a run Wednesday in Broken Bow. 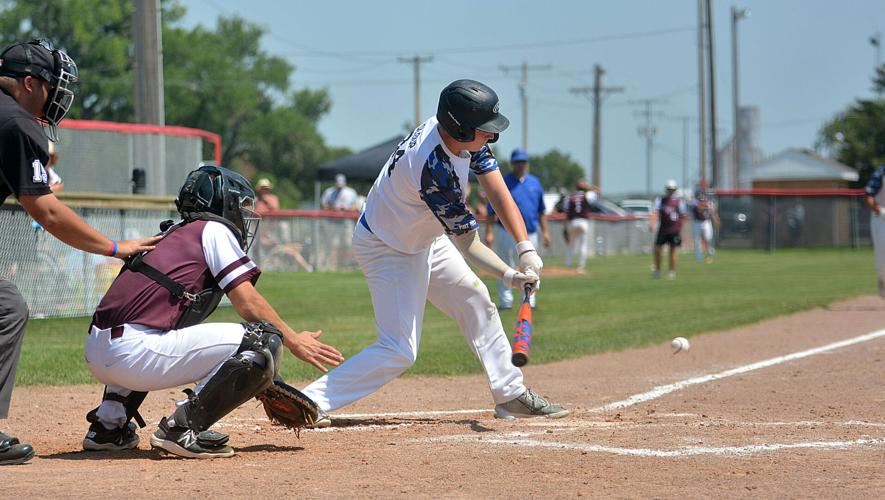 Lakeview outfielder Brenden Sloup swings at a pitch low in the strike zone Wednesday against Waverly in Broken Bow. 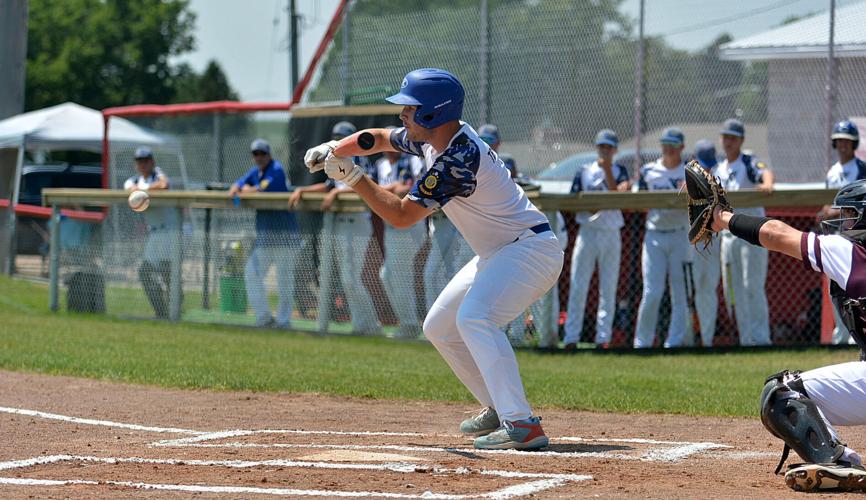 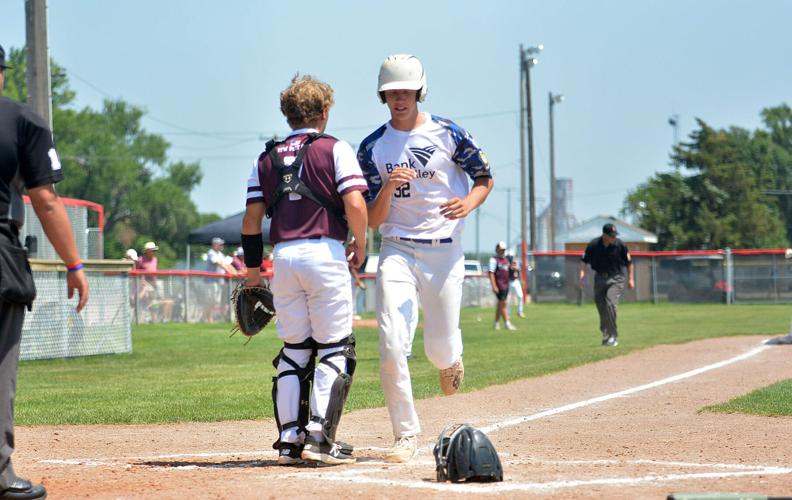 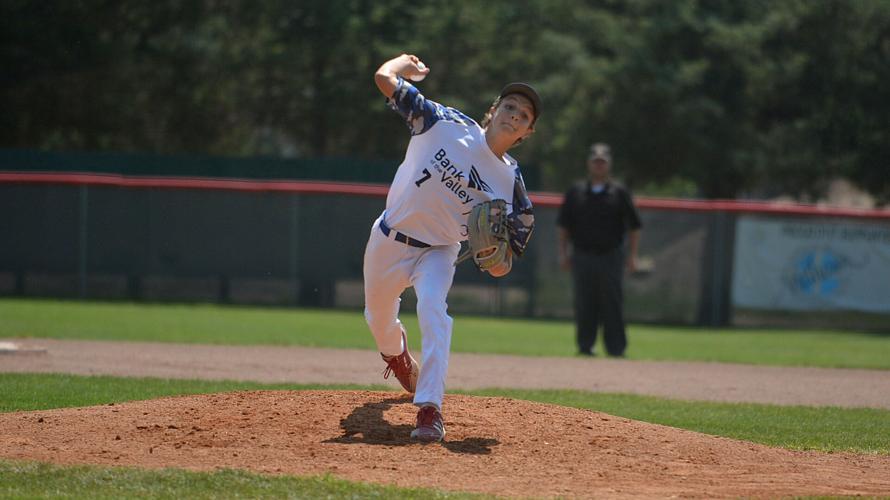 Bank of the Valley pitcher Caleb Sloup winds back to throw a pitch in Wednesday's championship round game at Paul Brown Field in Broken Bow. 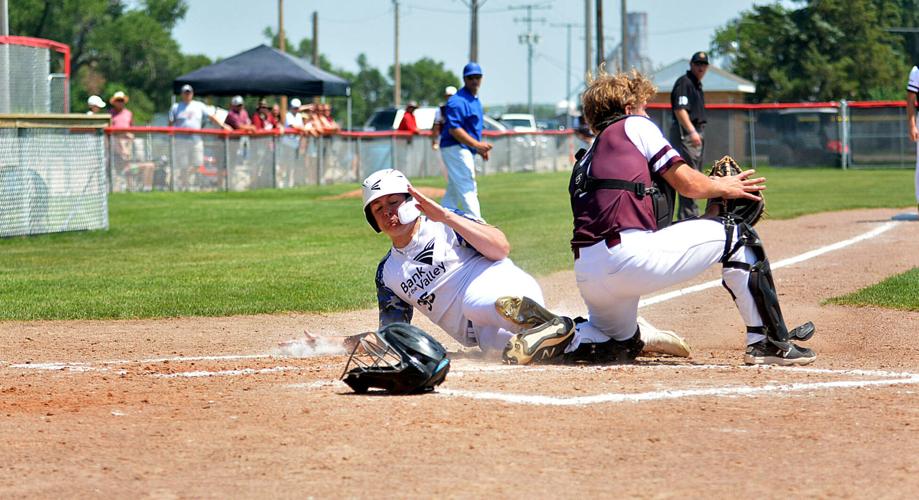 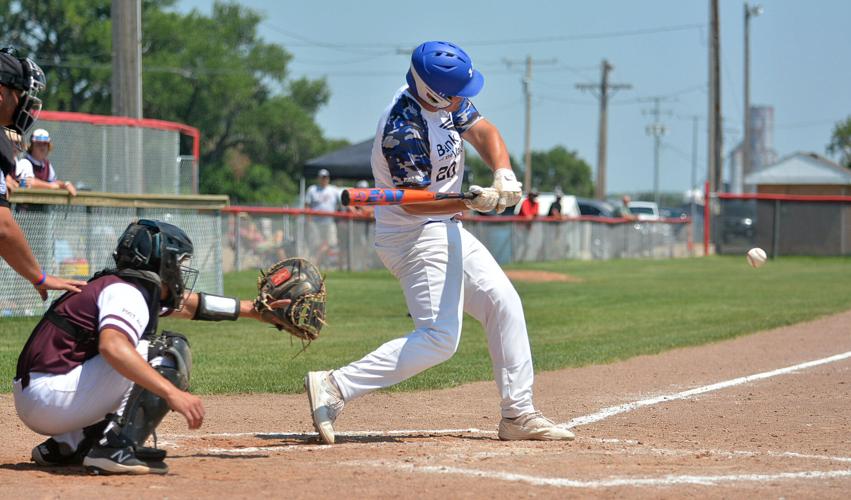 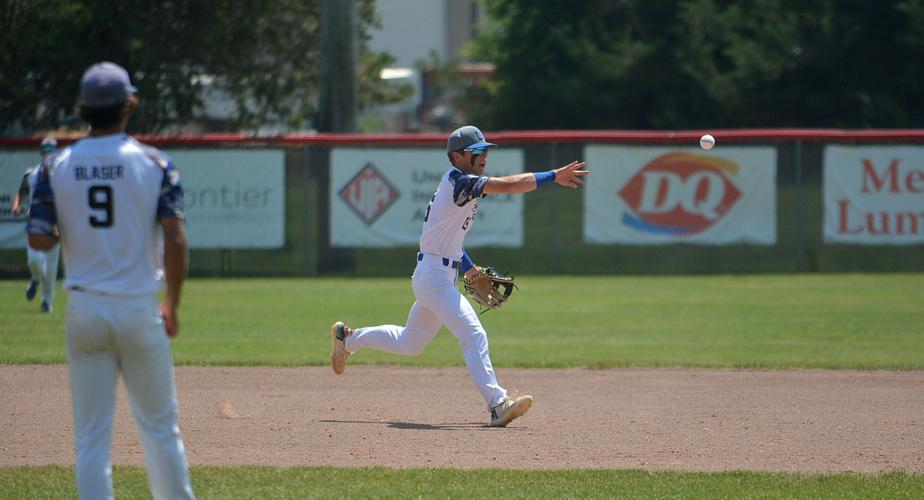 Lakeview second baseman Jordan Kracl flips a grounder to first base in Wednesday's championship round game at Paul Brown Field in Broken Bow. 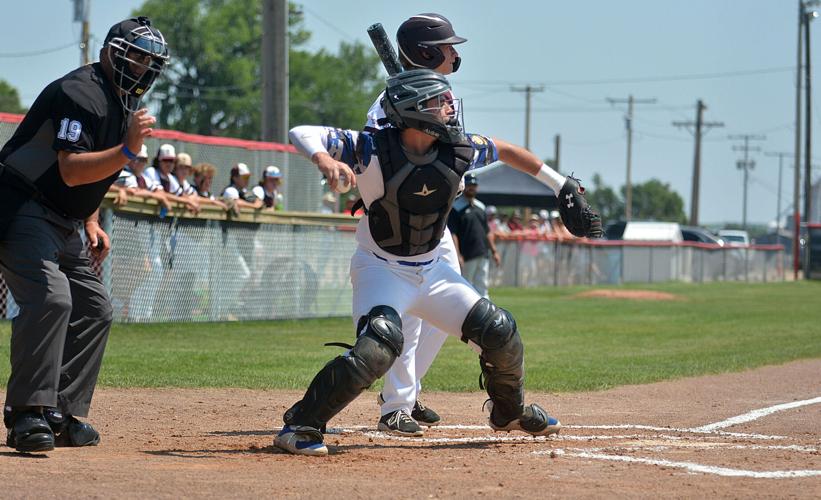 Lakeview catcher Krae Lavicky winds back a throw to second base in Wednesday's game against Waverly in Broken Bow. 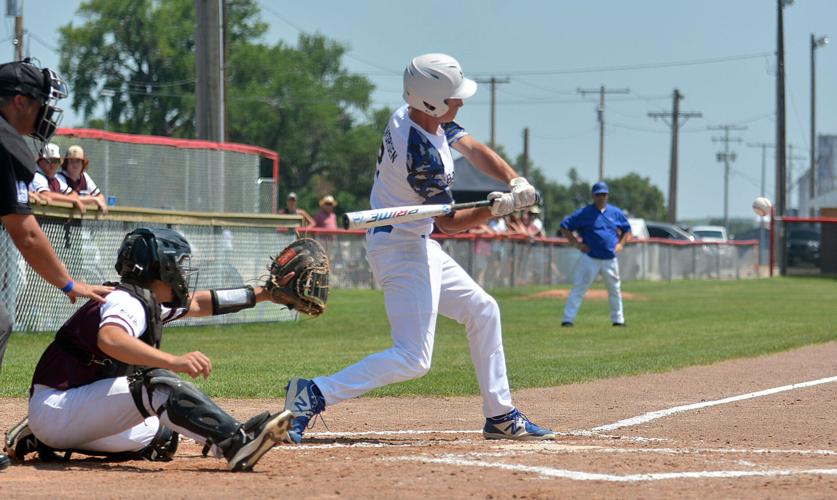