Reaching for perfection: Reds closing in on unbeaten season
View Comments
Share this
Return to homepage × 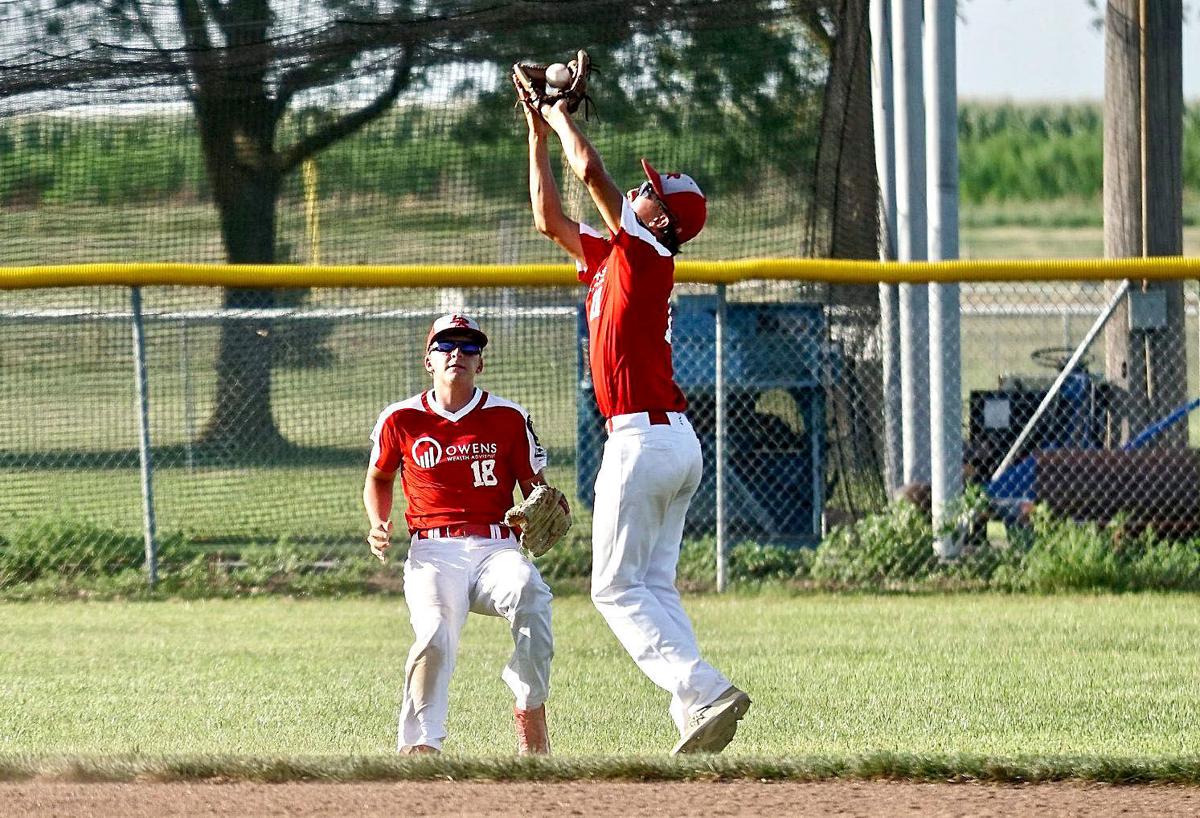 Kolby Blaser snags a pop up on the infield on Friday in Tekamah. Blaser and the Reds are a perfect 10-0 as their season enters the final week. 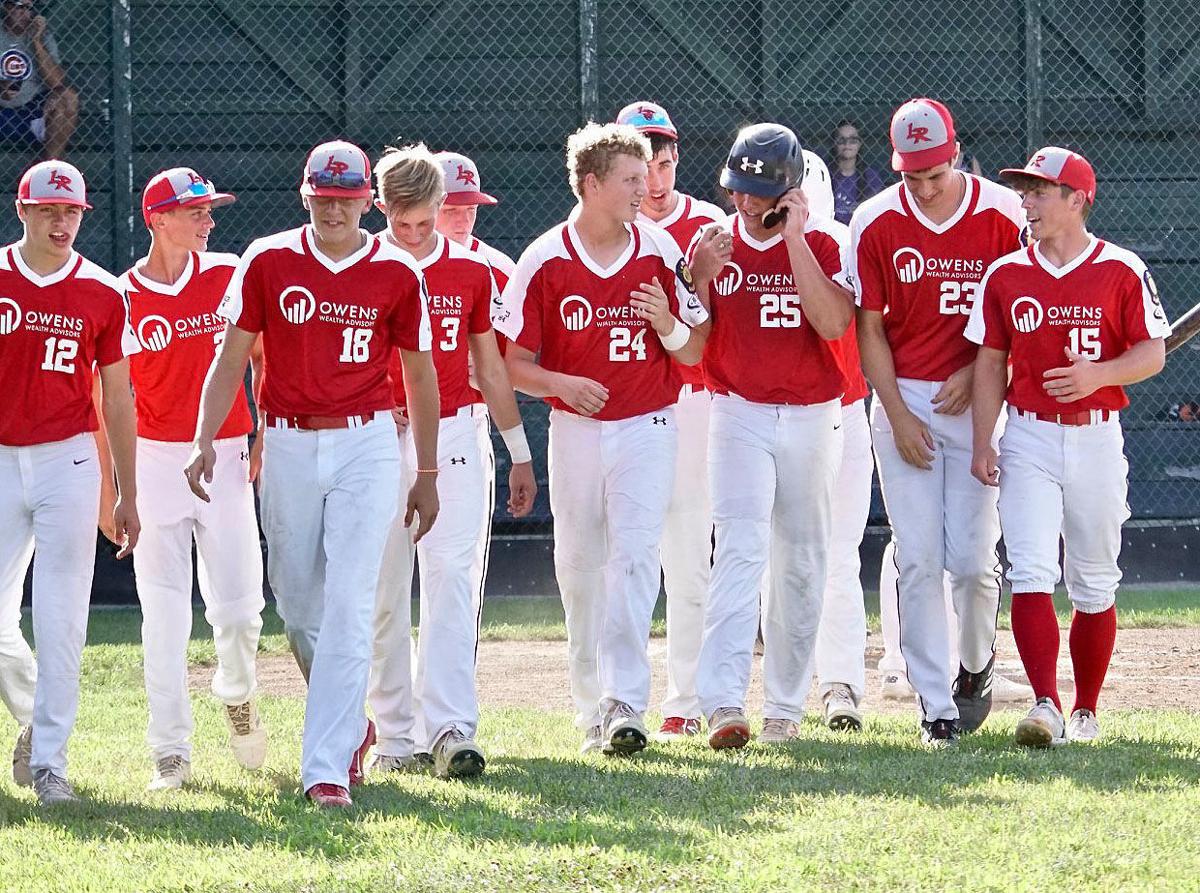 Owens Wealth Advisor players head back to the dugout on Friday in Tekamah after greeting Adam Van Cleave at the plate following his solo home run. 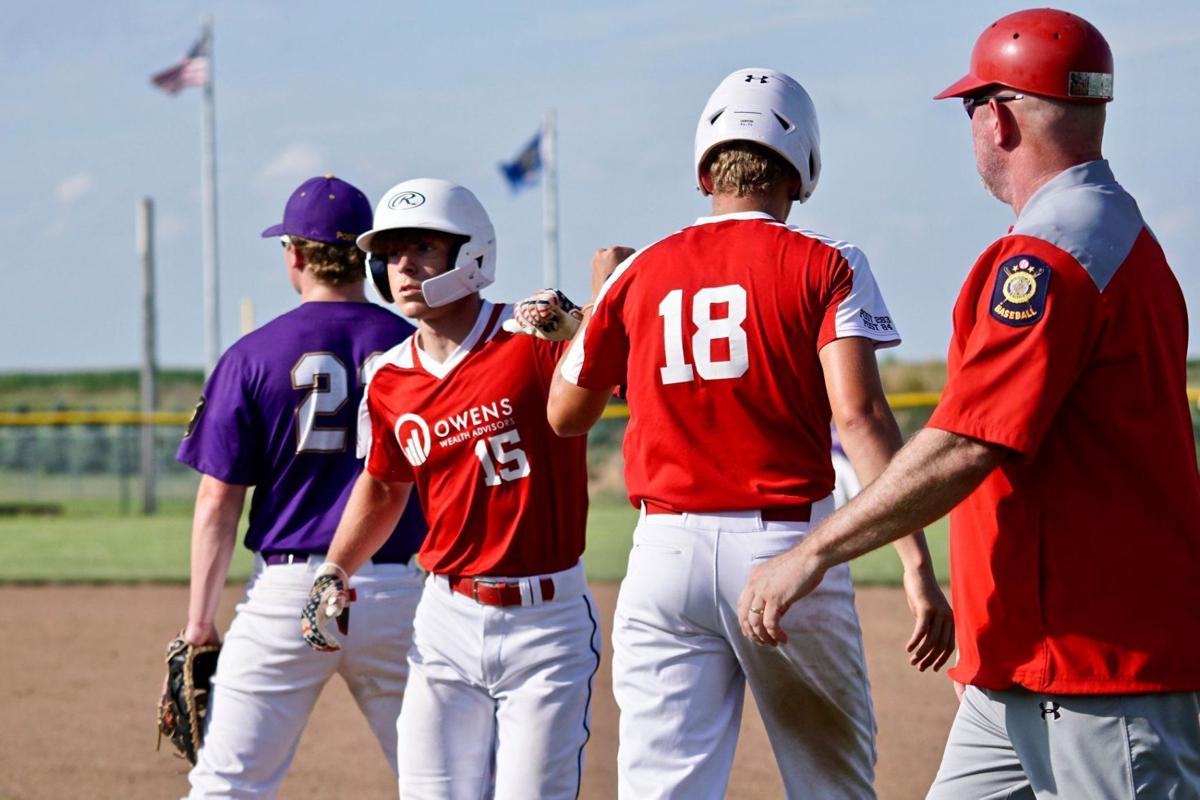 Jordan Kracl is greeted by courtesy runner Mason Klug at first base following a hit and an RBI on Friday in Tekamah. Kracl earned the pitching with four scoreless innings.

Two innings later, OWA had plate six en route to a 12-0 win and the seventh victory of the season by at least eight runs. Such has been the case for Reds opponents this season - what seems like an opportunity to hand OWA a loss always vanishes in the blink of an eye. In that same blink, the game is suddenly over.

The Reds anticipated a solid season with much of the roster returning then the addition of the Sjuts brothers from Humphrey and two David City players looking for a home after their own Legion squad decided not to organize a team. OWA expected to win every game. But in this manner, scoring 100 runs while allowing just nine? No, that level of domination far exceeds the team's wildest dreams.

Owens was set for a four-game week hoping to finish the season 14-0. But a member of the team was forced to take a COVID-19 test after recommendations from his doctor. That meant canceling Monday's home game against Albion and likely Wednesday's game against Arlington.

Depending on what the results show, the player either will or won't be cleared for a doubleheader Friday at O'Neill. Yet, down one man seems like little concern for a group that has excelled in every aspect of the game. That's not necessarily something coach Travis Tessendorf would have said before the season.

A few key additions has bolstered the pitching staff to the point it's almost untouchable. That strength has allowed hitters to swing freely and chase big innings rather than manufacture runs. Defensively, the Reds can absorb mistakes in the field because its pitchers rarely walk anyone and average over 10 strikeouts per game.

It has all combined into a juggernaut that would almost certainly be the favorite for the Class B state title.

"I thought we would have a good team in comparison to last year. Last year, I thought we had a really good team, too. I would probably say we're quite a bit more deep in pitching this year," coach Travis Tessendorf said. "By adding the Sjuts boys and bringing Kracl in and having Kolby this year, we're a lot deeper. That was probably our biggest question mark coming in. Now, that's obviously our strength."

Jacob Sjuts and Jason Sjuts, 6-6 players out of Humphrey, decided to add baseball to their list of summer activities after a year away. Jordan Kracl, a player out of David City, joined up when his hometown decided not to organize a team. Kolby Blaser, out because of injuries the last two summers, is finally part of the team.

All that group has done is made 16 pitching appearances, struck out 90 hitters, walked just 13 and only allowed three earned runs. At the plate, Jason Sjuts is hitting .353 with an on-base percentage north of .500. Blaser leads the team with 18 runs scored and has an eye-popping average of .586. Kracl is hitting .320 with eight RBIs.

Kracl would not have been on the team in a regular summer, but the Sjutses plus Blaser added to a roster already full of experience would still have made OWA more than formidable.

Had the Sjutses not joined up, Tessendorf would have faced a situation where his only reliable arms were Blaser and Cooper Tessendorf. Thankfully, he's never had to try and cobble together a staff behind just those two.

"If we didn't have Jacob of Jordan, you'd see a lot more of Adam (Van Cleave) and a lot more of Eli (Osten)," coach Tessnedorf said. "...The pieces, after the first few games, have just kind of fallen together."

Adam Van Cleave at the top of the lineup is hitting .531 with 16 runs scored. Tessendorf is at just .258 but has an on-base percentage of .378. Those two were the main holdovers from a year ago and the anticipated table setters for 2020.

Behind them have emerged Blaser and Osten. Where Blaser has provided constant hits, Osten has been the source of constant power. The third baseman is hitting .471 with six extra-base hits, two home runs and a slugging percentage of .794.

OWA can still steal bases, the team has 26, but it also has matured into a group that can flat out hit. The team has 26 extra-base hits and an overall slugging percentage of .496.

What's been most enjoyable is how quickly the bond was formed. The coaching staff wasn't certain how the roster would mesh with newcomers. Yet, from Game 1, there has only been one mindset: winning.

"We've all just kind of fit together. Everyone knows where they fit in the lineup, their role on the team and it's worked really good," Tessendorf said.  "I wish I could say we planned it this way, but we didn't. We didn't know what we were getting, but now I wish I could have them back next year."

OWENS WEALTH ADVISORS 12, TEKAMAH 0: OWA moved to 10-0 on Friday with a fourth shutout in five games. Kracl started and went four innings with five strikeouts, three hits and no walks.

The Reds left a two-out single on in the first and a two leadoff walks on in the second but then plated three in the third, two in the fourth and six in the fifth.

Van Cleave started the third-inning rally with a solo home run to left field. Osten and Kracl then drove in runs and Kracl scored on an error in right.

Osten drove in two with a two-run double in the fourth. The Reds sent 12 hitters to the plate in the fifth and scored six on two errors, a passed ball and RBIs by Noah Koch, Carson Hoefer and Brenden Sloup.

Blaser had no doubts despite injury history

Kolby Blaser had a season for the ages this summer.

Making a name for themselves: Young, Flyr bust out for Cornerstone

The Cornerstone Insurance Group Seniors 2020 season was short and sweet, but not without ramifications.

The Cornerstone Insurance Group Seniors, like two other teams in town, were forced into canceling the end of the season due to COVID-19 concerns.

Bank of the Valley wins 2 of 3 in final weekend

Kolby Blaser snags a pop up on the infield on Friday in Tekamah. Blaser and the Reds are a perfect 10-0 as their season enters the final week.

Owens Wealth Advisor players head back to the dugout on Friday in Tekamah after greeting Adam Van Cleave at the plate following his solo home run.

Jordan Kracl is greeted by courtesy runner Mason Klug at first base following a hit and an RBI on Friday in Tekamah. Kracl earned the pitching with four scoreless innings.