LINCOLN - Legendary Columbus High coach and shooting instructor Jack Johnson was on hand for the final practice of state preparations last year at Humphrey/Lindsay Holy Family. Among other things, he and Jacob Sjuts spent time afterward working on free throws.

Sjuts then went 8 for 9 from the line in the D-1 title win over Howells-Dodge a few days later, sealing a comeback win with three foul shots in the final minute of overtime.

Through two games in Lincoln this year, he's gone 13 for 14 at the stripe including 7 for 8 in the fourth quarter in Wednesday's 42-40 Class C-2 semifinal win over Norfolk Catholic at the Devaney Center.

Sjuts finished with a game-high 19 and helped lead his team back to a third championship game in four seasons. Of course, as is the tradition with HLHF boys basketball, it wasn't easy.

The Bulldogs fell behind in the fourth quarter after leading most of the game and trailed by four with under four minutes to go. But where most groups might crumble under the pressure, it's almost as if HLHF prefers to play with the game on the line.

"Obviously, we've been down here the last three years and we have a lot of experience. I've been in, I don't know, how many situations like I was just in shooting free throws and stuff like that," Sjuts said. "I have a lot of experience, I think that really helped me out a lot. It's just (coach Joe) Hesse giving me the ball and giving me the confidence to go make plays."

HLHF led for the first 23 minutes of the game until eight straight points by Norfolk Catholic to end the third quarter sent the teams to their benches with the Knights up 30-29 and Bulldog fans no doubt thinking, "Here we go again."

Norfolk Catholic perhaps began to plant a seed that this time might be different when Brennen Kelley scored in the paint and Preston Burbach sank two free throws for a 36-32 lead with under four minutes remaining.

But opponents should know by now that, like Lazarus in the tomb, HLHF is going to make a comeback. Jason Sjuts hit a three moments later then Sage Frauendorfer tied it on a free throw after he drew a shooting foul on an offensive rebound.

That sparked a run of eight straight points that put HLHF ahead to stay. Jason Sjuts gave Norfolk Catholic some new life with 18 seconds left when he fouled Burbach on a made shot. The Knight senior to cut the lead down to just one on the basket and the ensuing free throw.

Jacob Sjuts then went back to the line, made the first but then missed the second and gave the Knights a chance with 5.7 seconds remaining. Burbach hustled up court and had it at the right wing but had to double clutch a shot between the defense of Cooper Beller, Ethan Keller and Jason Sjuts. Jacob grabbed it out of the air short of the hoop and HLHF celebrated yet another dramatic win in the capital city.

"We know we're a really good team and we're going to fight back," Jacob Sjuts said. "We're not going to give up until the end; we've got a lot of grit."

Norfolk Catholic gave HLHF the lone blemish on its record in a 39-36 defeat in the subdistrict final. It was a season-low point total by 11 and a game that saw the Bulldogs shoot 38%, go 3 for 15 from three-point range and Jacob Sjuts go 0 for 5 and finish scoreless.

HLHF then exploded out of the gates on Wednesday and led 9-0 when Jacob had six and Jason hit a three to start the game. The Bulldogs went 4 for 8 in the first quarter and held a 13-5 advantage.

Norfolk Catholic had better ball control in the second quarter and began to find shooters. The Knights scored their final nine points of the frame on threes and was within 25-22 at half.

That Norfolk Catholic defense that was so good in the first matchup then began to dictate the action once again. HLHF made just three field goals after halftime and went 12 minutes in between made shots after Jacob scored twice in the first minute of the third.

Luckily for the Bulldogs, they went 10 of 14 from the line in the final two quarters and scored 10 of their 17 second-half points on foul shots.

Jacob Sjuts credited Johnson changing up his routine at the line for how he's improved over the past 12 months. He's hit at 71% as a senior following 63% as a junior, 65% as a sophomore and 67% as a freshman.

"Credit to him. I had this routine where I was just at the line for eight or nine seconds," Sjuts said. "He said, 'Just clear your mind, go up there, take a dribble like its a normal shot, shoot the ball,' and I've been doing that ever since."

Wednesdays' win gives HLHF a chance at back-to-back titles. Standing in the way is Grand Island Central Catholic, also looking for its second in a row to go with runner-up in 2020. Almost assuredly, it will come down to the final minute.

HLHF needed a steal in overtime in the final seconds on Monday against Howells-Dodge. Last year the Bulldogs came back from down 10 in the D-1 title game and won it in overtime. They started the 2021 state tournament with a win in the final minute over Southern Valley after facing a 41-41 tie.

In the past five state games for HLHF, the average margin of victory has been a little more than five points.

"They've been in this hole so many times, they know what to do," coach Joe Hesse said. "Early in the year we kind of do these situations and try to stack the deck against them and make it as difficult as we can, and we have so many games that are similar to this. You'd like to think you can go out and give everybody your best game, but some times that doesn't work, and you've got to get creative and find new ways to get it done." 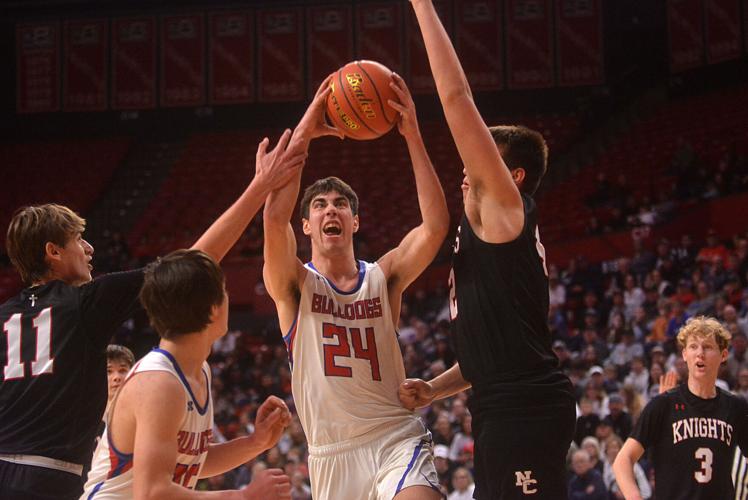 HLHF senior Jacob Sjuts fights through contact on his way to the rim in Wednesday's Class C-2 semifinals in Lincoln. Sjuts scored a game-high 19 points and was 9 of 10 from the free throw line. 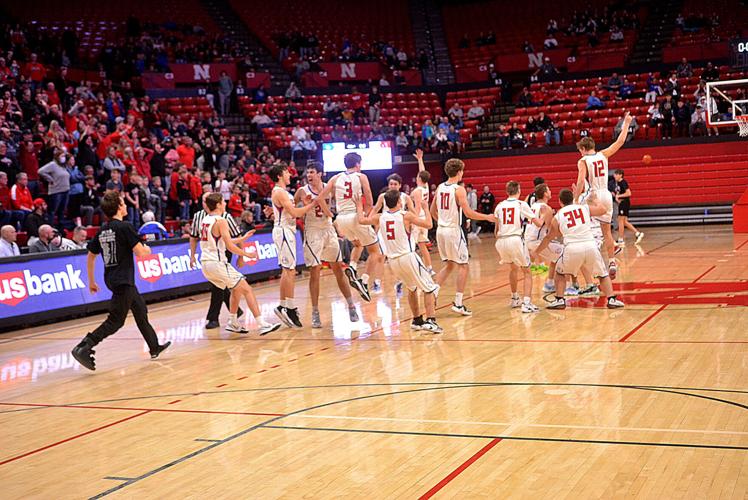 HLHF players pour out onto the floor in celebration after the final moments ticked away in Wednesday's 42-40 Class C-2 state semifinal win over Norfolk Catholic. The Bulldogs will play for a third championship in four years on Friday at 4 p.m. 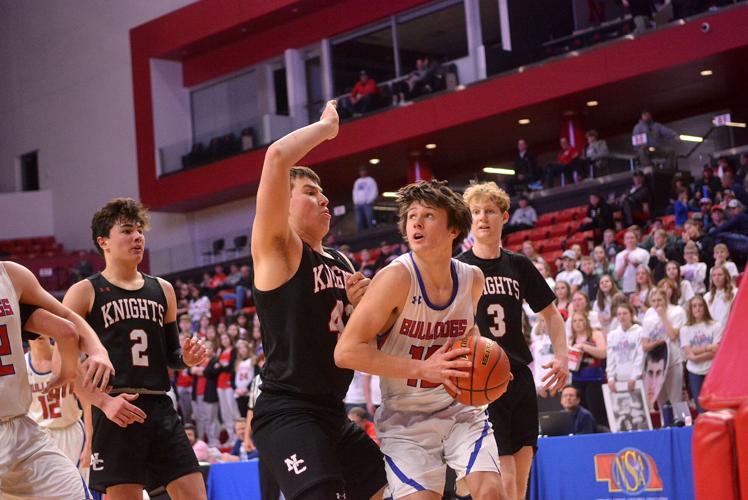 HLHF junior Sage Frauendorfer looks for room in the paint on a drive to the basket in Wednesday's 42-40 state win over Norfolk Catholic. 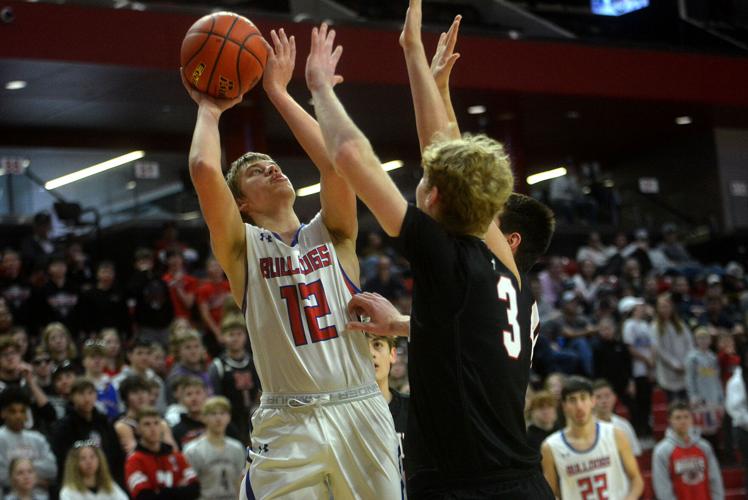 HLHF senior Cooper Beller drives to the rim and pulls up for a jumper on Wednesday against Norfolk Catholic. Beller scored six in the state semifinal win. 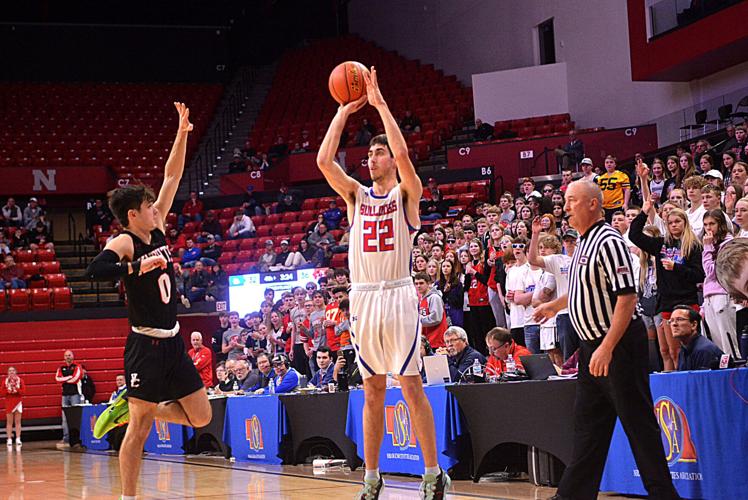 HLHF senior Jason Sjuts rises up for a three-pointer that cut Bulldogs' fourth-quarter deficit down to one with just over three minutes remaining. 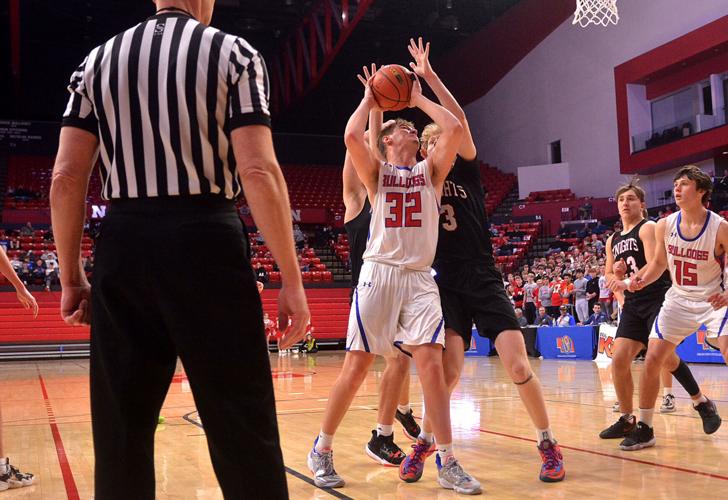 HLHF senior Ethan Keller tries to work through a double team in the second half of Wednesday's state tournament win in Lincoln. 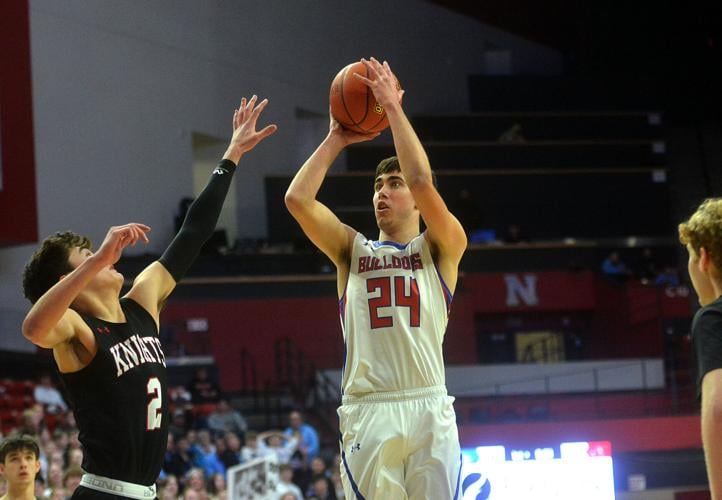 Jacob Sjuts takes a jump shot over the defense in the first half of Wednesday's state tournament semifinal win over Norfolk Catholic. Sjuts had a game high 19 points. 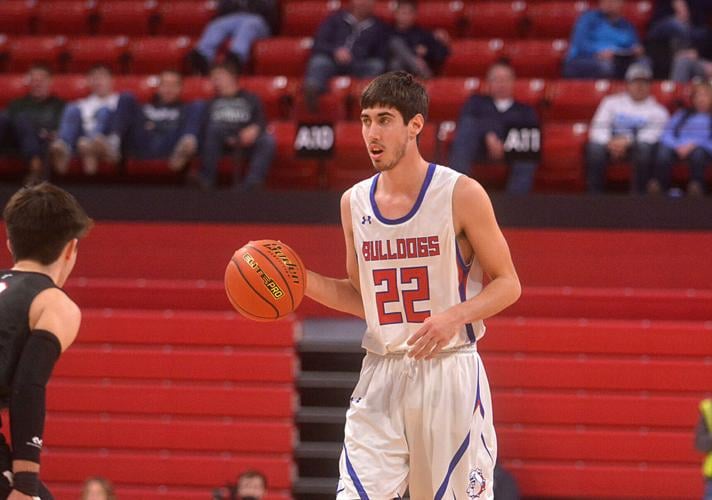 HLHF senior Jason Sjuts looks over the floor in the first half of Wednesday's state tournament win over Norfolk Catholic. 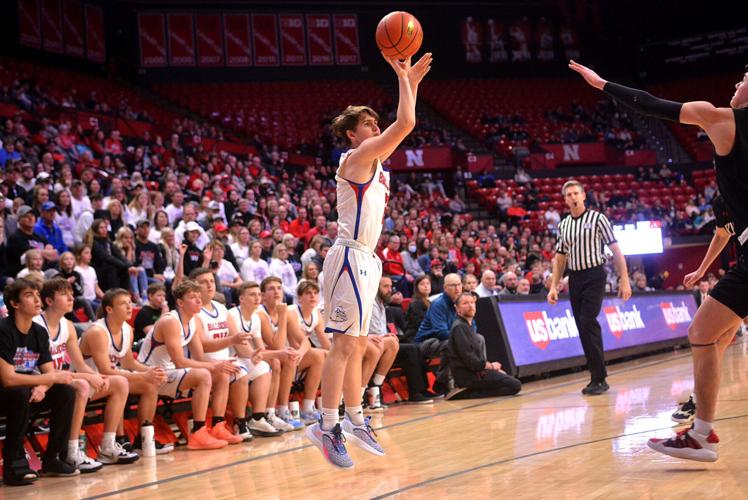 Bulldog senior rises up for a three-pointer in Wednesday's state semifinal win at the Devaney Center. 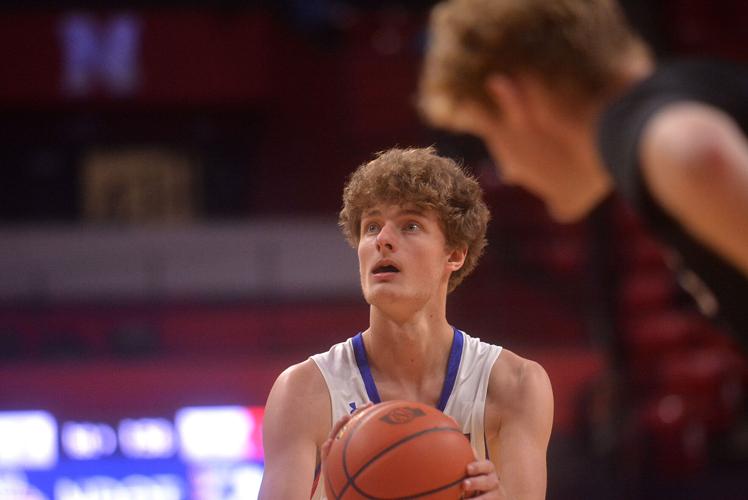 HLHF senior Kyle Preister eyes the basket during a free throw attempt on Wednesday at the state tournament.