Columbus High and Lincoln High each won a game last season. CHS didn't pick up its one victory until late January. It took the Links until early February before they found the win column.

It seemed only right, then, that when the two met Saturday in Columbus in the second game of the season, picking up a win meant overtime, last-second shots and an absolute battle.

CHS made more than enough mistakes to let that battle slip away, but the Discoverers also made just enough big plays and had more than enough resolve to grab a hard-fought 76-72 win in double overtime.

It required a three-pointer at the buzzer by Tadan Bell at the end of regulation and a steal and a layup by Tanner Esch in the final seconds of the first overtime, but Columbus would not be denied. The Discoverers scored eight of nine at one point in the second extra period and made just enough free throws to hold off the Links.

Senior Ean Luebbe scored 20, fellow senior Ryan Eickhoff had 19 and Columbus won its first game at home since Valentine's Day 2020. CHS lost all 10 games at home last season, but it was struggling through that adversity, and a 1-20 season, that coach Jordan Hitchcock pointed to as the difference on Saturday.

"It's just the heart of our kids," Hitchcock said. "If we didn't play hard all year last year, even though we were losing, I don't think we'd get this one."

The winning sequence came early in the second overtime when Tadan Bell scored on a layup. Ashton LaPointe followed it up with one of his own after a Lincoln High turnover then Ean Luebbe grabbed an offensive rebound, drew a foul and hit two free throws.

CHS led 73-69 at that point and had at least a 3-point advantage the rest of the way. Columbus went 5 of 10 from the free throw line after Luebbe sank his two but Lincoln High was 1 of 5 shooting after taking a brief 69-67 lead.

"Last year wasn't the way we wanted it. But every day we step into practice and we're always looking to get better," Luebbe said. "It paid off today."

The game was played within a few possessions from start to finish. Columbus had a chance at the knockout punch early in the fourth when Ashton LaPointe scored on a turnaround for a 47-39 advantage. The Discoverers built a lead thanks to 13 by Eickhoff in the third quarter.

But after LaPointe's bucket, Lincoln High scored eight of the next 10 while CHS missed three times at the line and set up a back-and-forth finish. Thankfully, the Links had their own struggles at the free throw line late and let the Discoverers hang around.

Lincoln High took a 58-54 lead with seven straight points as the game reached under a minute to go. It could have been more but the Links also missed three times from the line. A Sam Kwapnioski offensive rebound and bucket made it a two-point game. The Links went 1 of 2 from the line and left the Discoverers 7.3 seconds for the tie. Bell caught it in the right corner, had to delay his shot when his defender went in the air and let it fly in just enough time to beat the horn.

"My mind was not focused at all at the moment. All I knew was that I had four seconds left," Bell said. "I saw something fly across my face and thought, 'Oh, can't shoot it now,' so I shot it afterwards and it went in. There was just enough time."

A three by Lincoln High's Ja Reese Lott-Buzby put his team up 64-62 in the first overtime. It was 67-65 with 25 seconds left when CHS turned it over on a bad pass inside. Luebbe deflected a pass just moments later and tipped it backwards to Esch who grabbed the loose ball and took it to the rim for the tie. Links' junior Collin Nick missed an off-balance 3 at the buzzer to force the second overtime.

Lott-Buzby scored on layup to start the second extra period before Bell, LaPointe and Luebbe gave Columbus the lead for good.

"We're never going to quit battling; it doesn't matter how much we're down by," Eickhoff said. "We're always going to battle."

Columbus turned it over 15 times in the second half and overtime, missed two throws up four in the fourth, missed the front end of a one-and-one with a one-point lead and had to play the end of regulation and overtime without Kwapnioski when he fouled out. But for as much as went wrong, and it's still a group learning how to win, making it happen while overcoming all those errors might serve CHS better in the long run than would have a double-digit win.

"It's kind of, who's going to be more resilient?" Hitchcock asked. "Today, because of the character of these guys going through all kinds of adversity, they've earned this; I'm really proud of them."

Kwap, Discoverers bounce back in road win at Lincoln High

Columbus High's Sam Kwapnioski wasn't the only member of the team that had a tough go of it Friday night against rival Fremont. But misses at … 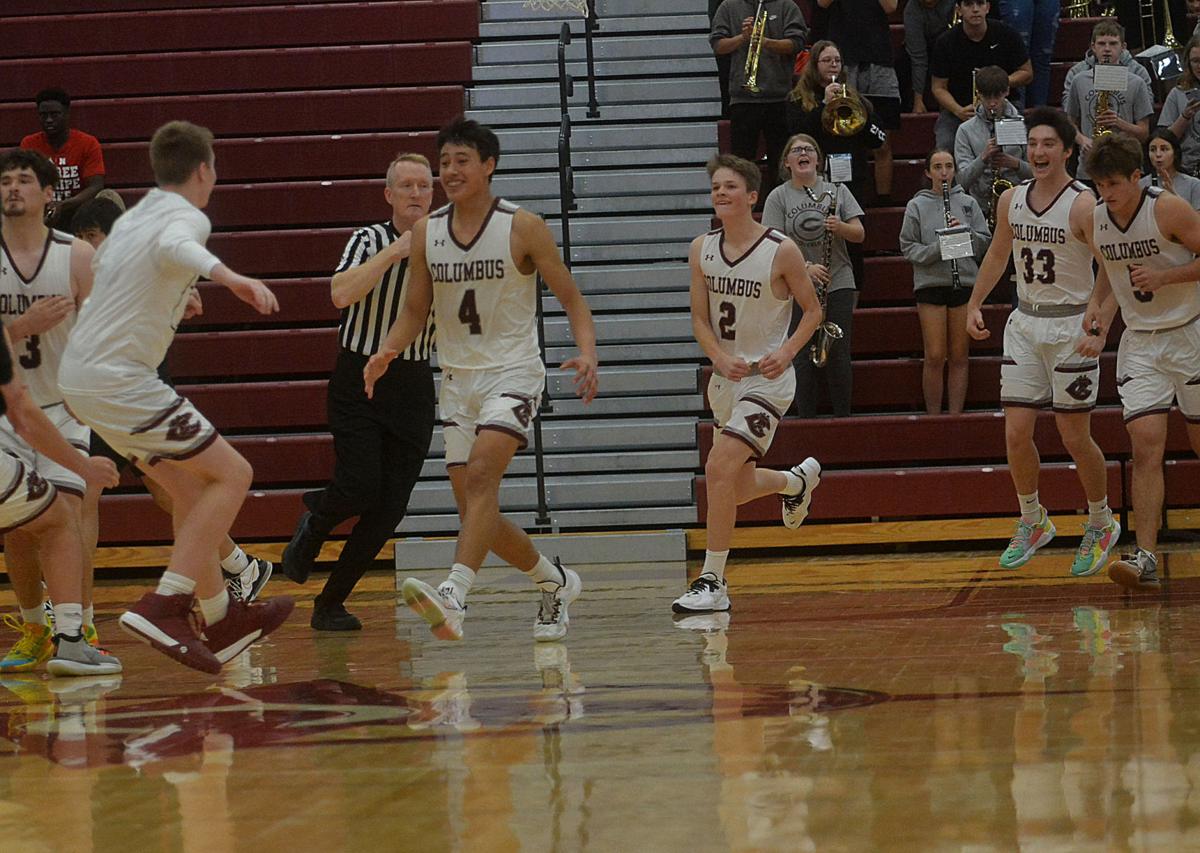 Ashton LaPointe leads the charge followed by Ryan Eickhoff (2), Dennis Pelowski (33) and Ean Luebbe (5) as teammates spill out onto the floor in the moments after Columbus High's 76-72 double overtime win Saturday against Lincoln High. 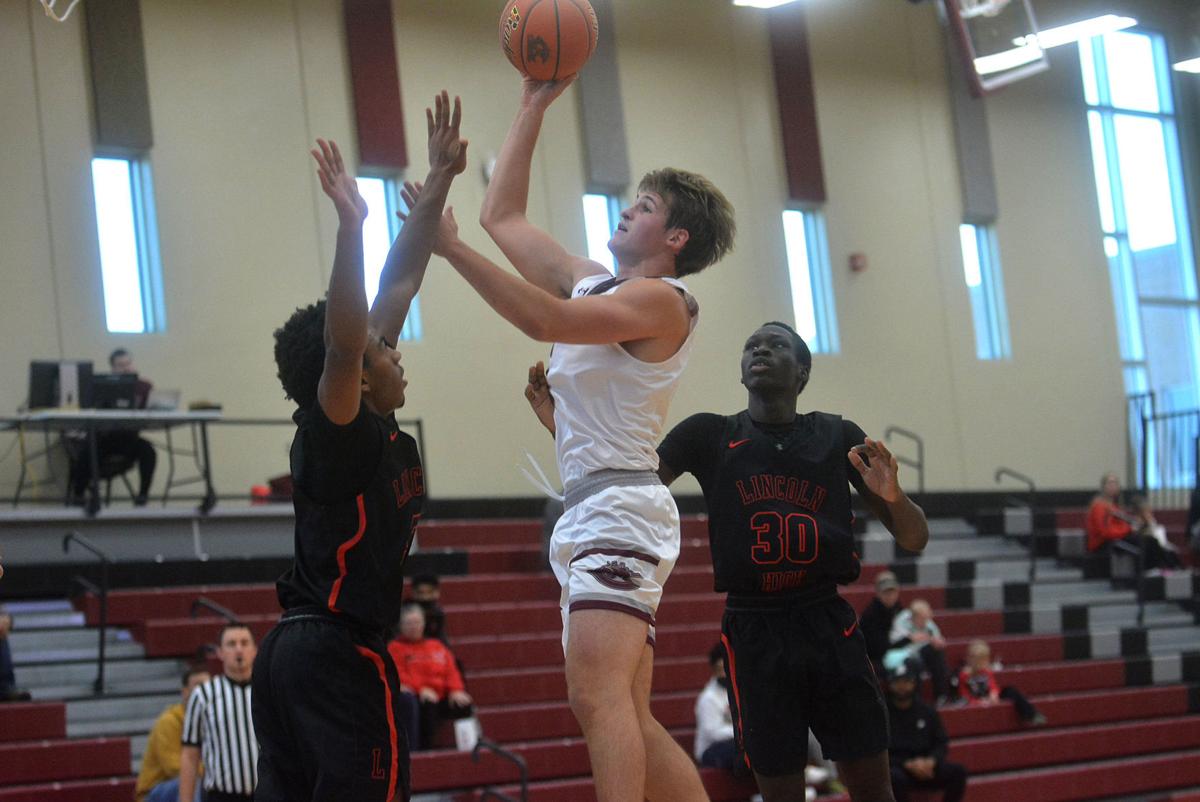 Columbus High senior Ean Luebbe puts up a shot over the Lincoln High defense on Saturday at home. Luebbe tied for the game-high 20 as the Discoverers picked up their first win at home in nearly 22 months. 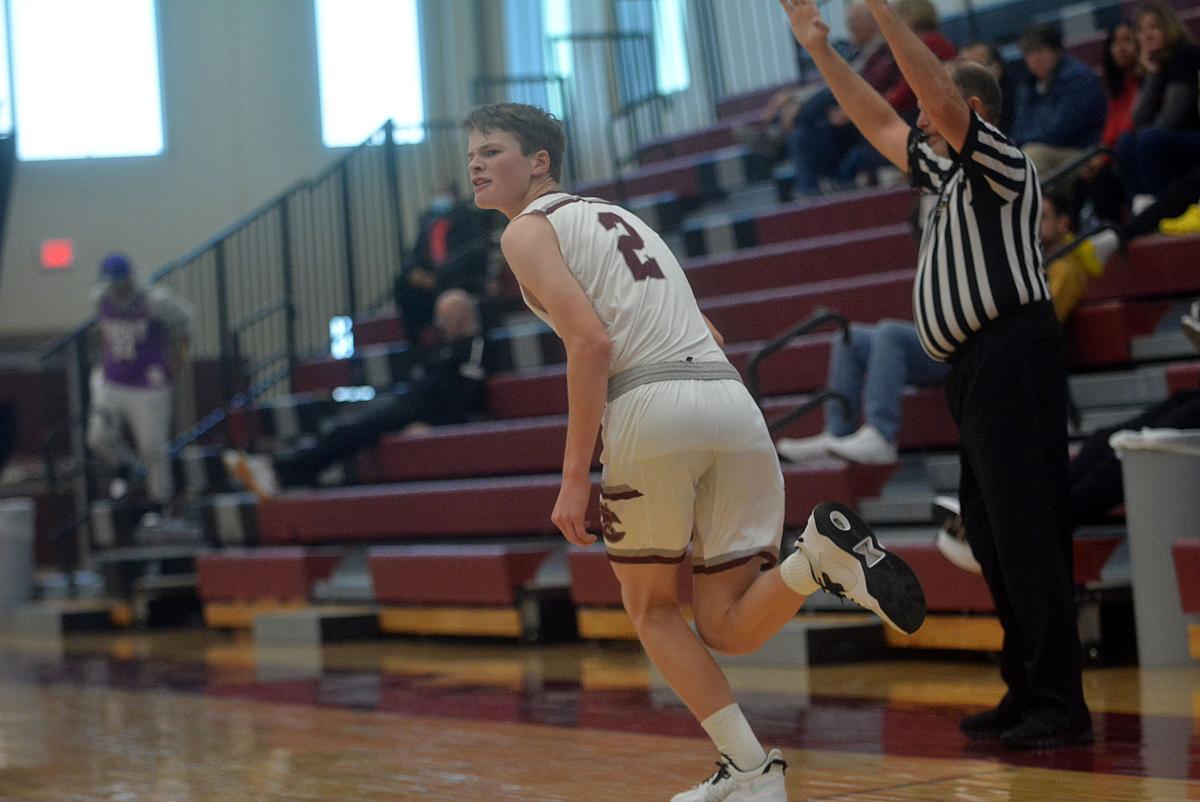 Columbus High senior Ryan Eickhoff turns and shouts back to his teammates as he runs to the other end following one of this three three-pointer makes in the third quarter of Saturday's win over Lincoln High. 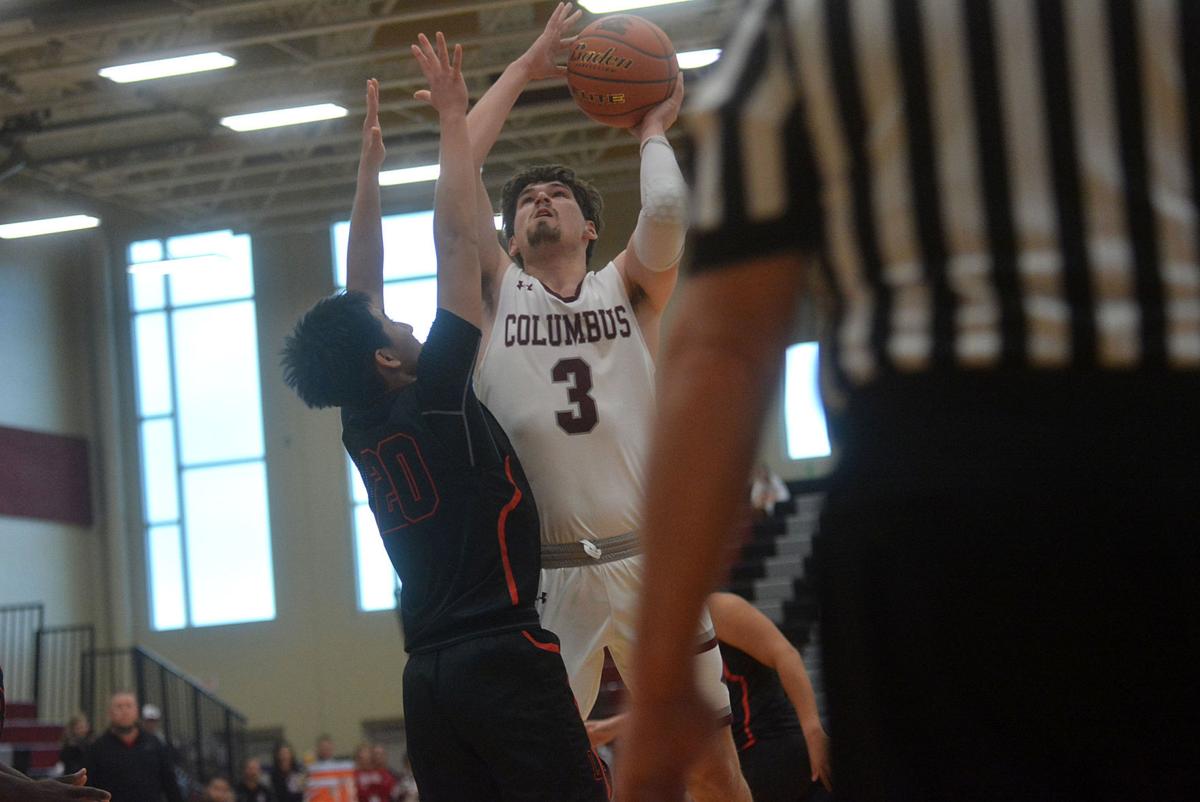 Columbus High senior Tadan Bell absorbs contact from a defender and puts up a shot on Saturday at home. Bell hit a three at the buzzer to force overtime in the win over Lincoln High. 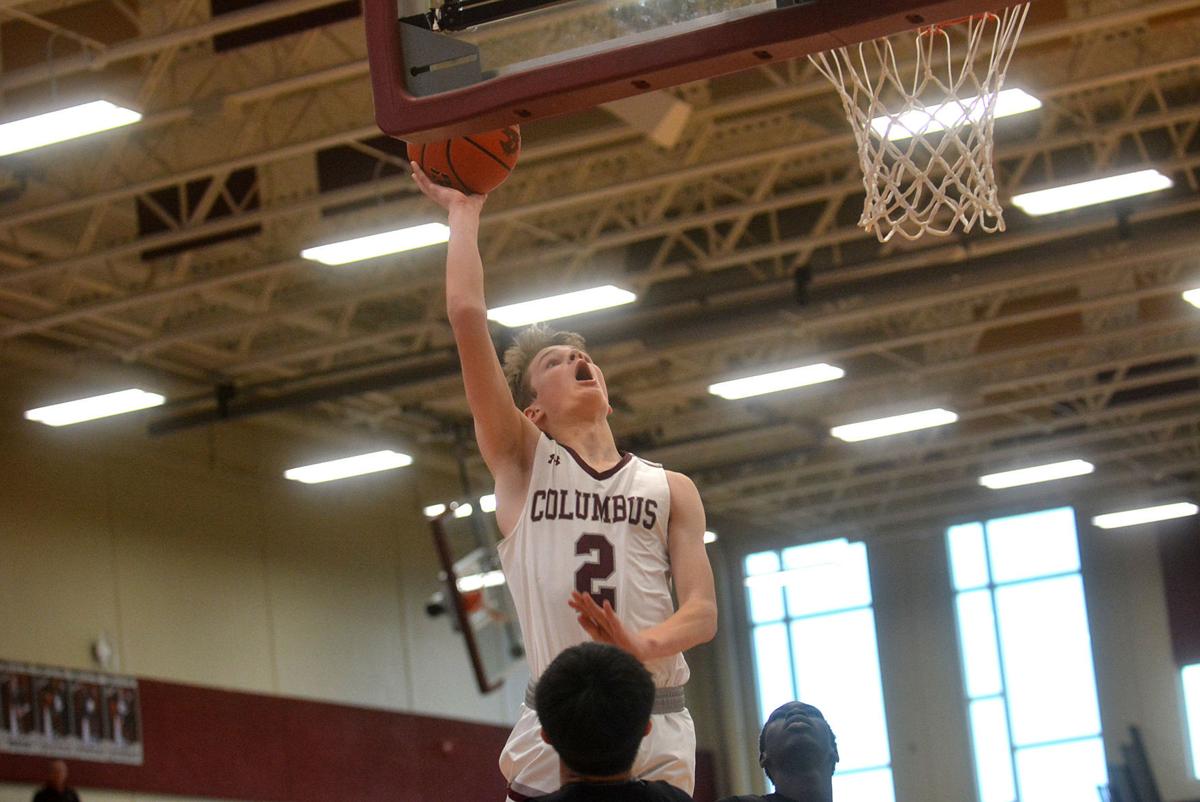 Columbus High senior Ryan Eickhoff scores over the top of a Lincoln High defender for two of his 19 points in Saturday's home win. 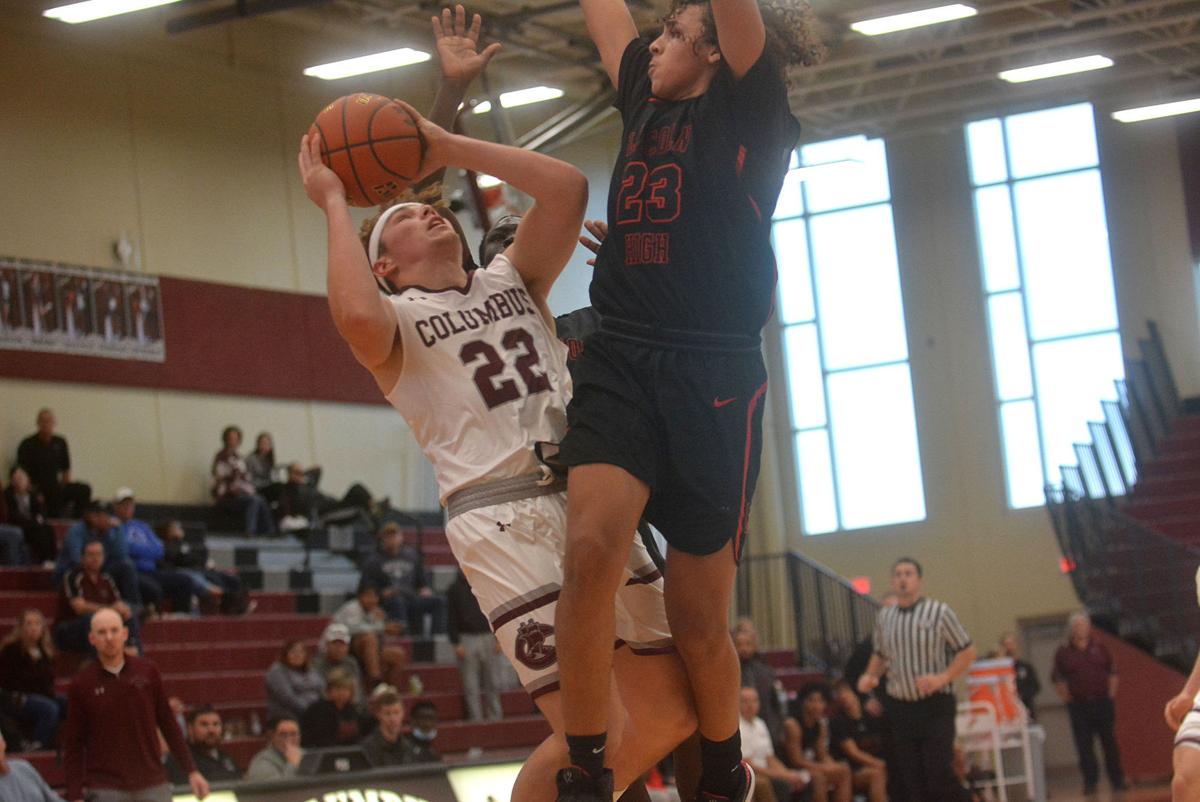 Columbus High senior Sam Kwapnioski draws contact and a foul on his way to the rim in Saturday's win over Lincoln High. 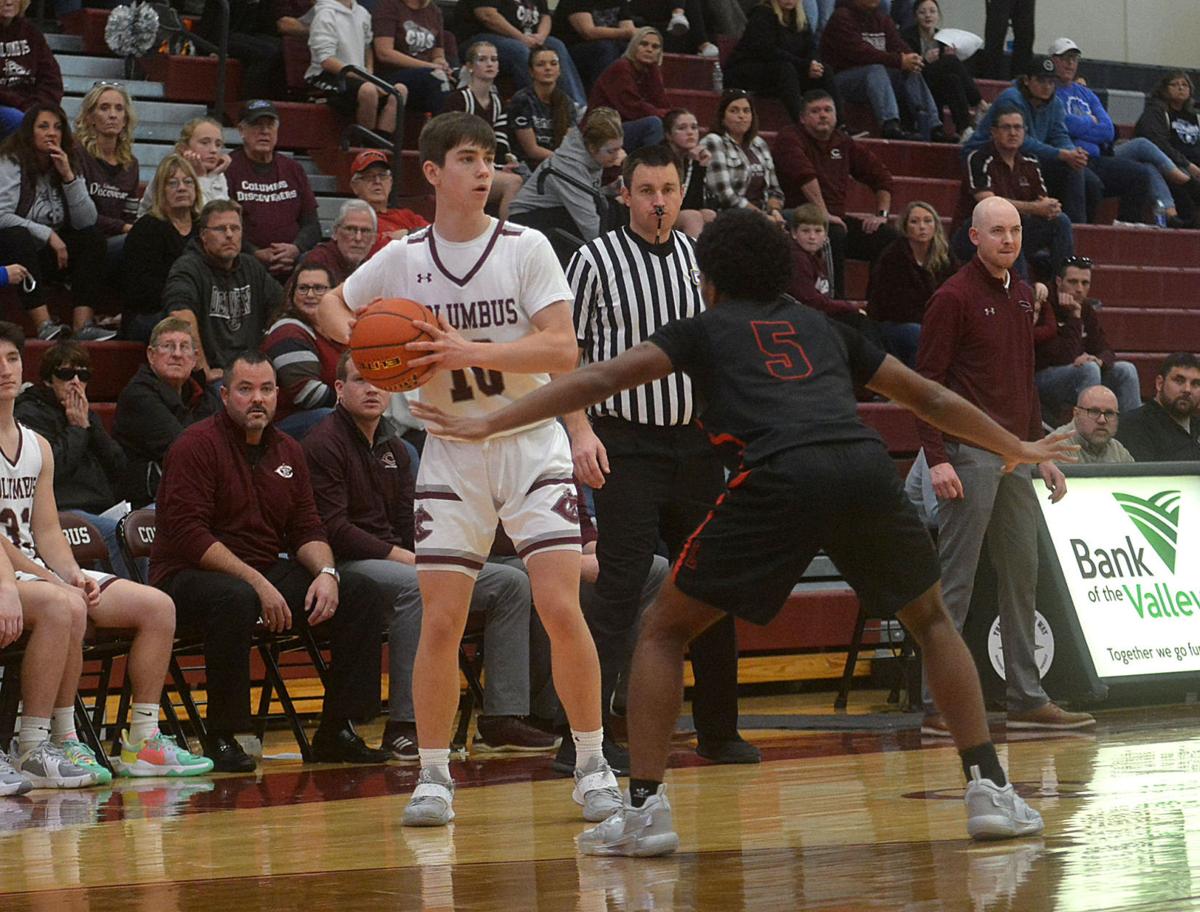 Columbus High sophomore Tanner Esch looks over the court for a pass on Saturday at home. Esch's steal and layup tied the game late in the first overtime of the win over Lincoln High.