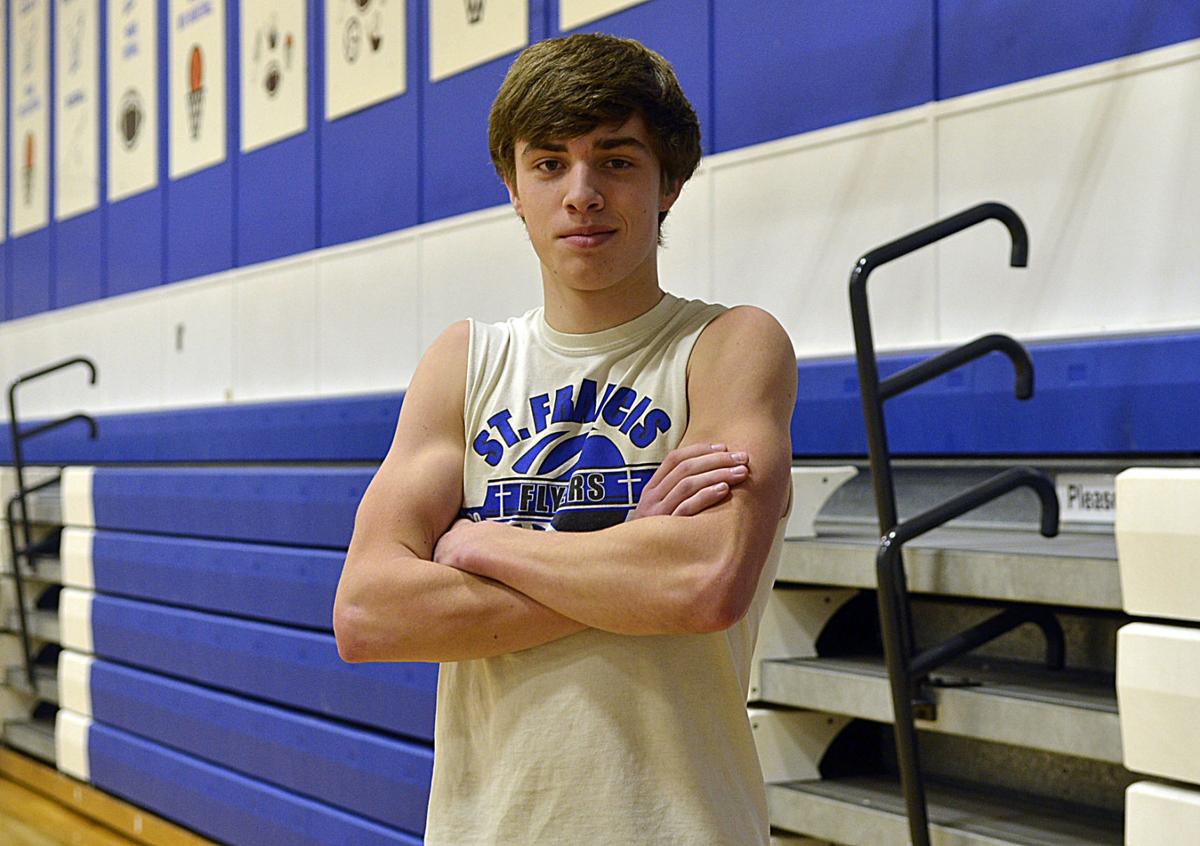 Humphrey St. Francis sophomore Tanner Pfeifer poses for a photo after practice last week. Pfeifer leads the Flyers in scoring for a program that features seven seniors and has gone 11-0 entering the weekend. 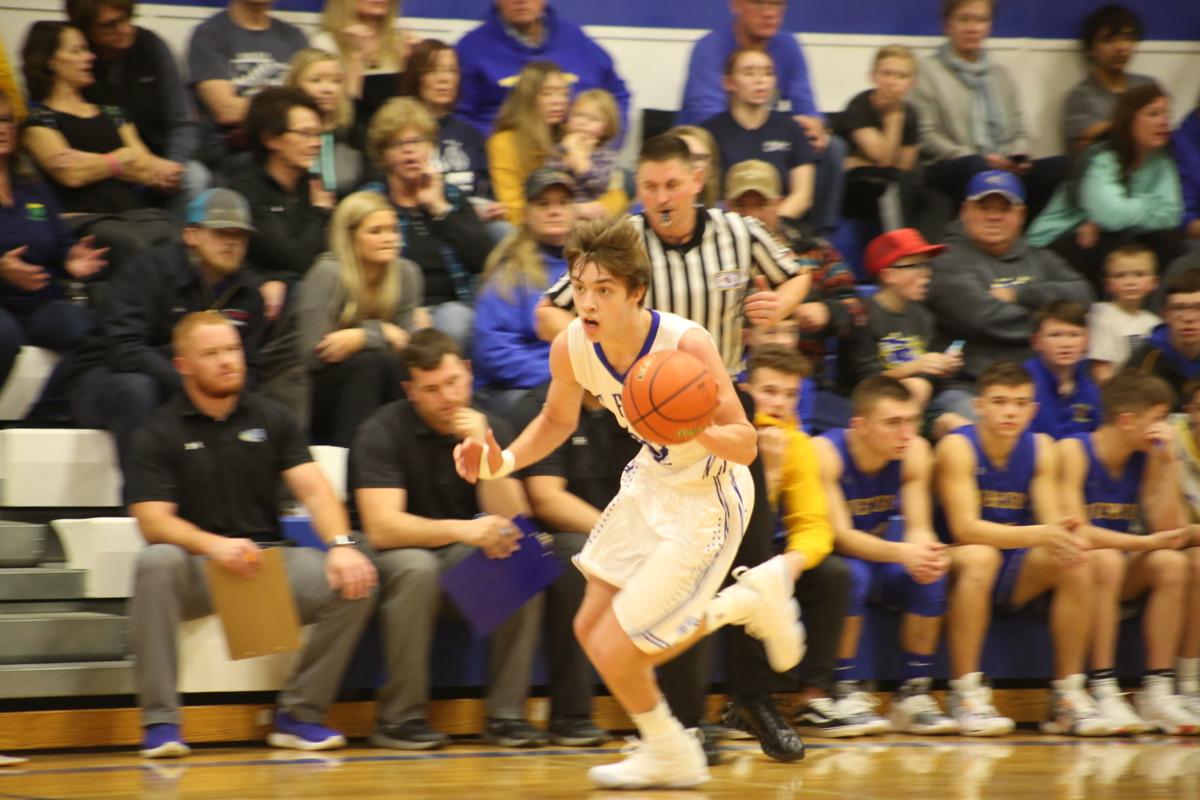 Sophomore Tanner Pfeifer breaks away with a steal during a game this season. Pfeifer's defensive ability at the top of Humphrey St. Francis' 1-3-1 zone defense has allowed the sophomore to find a starting role and find success.

Humphrey St. Francis boys basketball is a team loaded with senior talent. Seven seniors make up the second-ranked squad in Class D-2, most of which were teammates just a few months ago when the Flyers won their fifth football state championship.

Yet, even with that many seniors at the smallest level of Nebraska high school basketball, it's a sophomore who is quickly becoming the most dangerous player on the floor.

Tanner Pfeifer leads the team in scoring at 17.5 points per game and is an integral part of the 1-3-1 defense where he guards the top of the key.

Pfeifer earned his starting role this season after being the first man off the bench his freshman year, a role he doesn't take lightly.

"It's something special because it motivates me to be able to play with my brother and get out there and make the most of it," he said. "It's really nice."

Pfeifer starts alongside his senior brother Trevor, the Flyer's quarterback last fall. That duo and the St. Francis boys program has yet to lose this season, running their record to 11-0 with a win Jan. 11 at Burwell. The Flyers are one of just 11 unbeaten teams left in Nebraska boys basketball.

Humphrey St. Francis is winning by an average of 25 points and has only played one game within single digits. Tanner Pfeifer's scoring touch is one reason why, but he credits his teammates for creating the opportunities he's taken advantage of.

"It's always competitive with us," he said. "Everyone just tries to make the most of it. Whenever we get those tips or steals I'm just out and running just trying to get the most points that I can. I'm usually the guy they look for first."

Fitting in with the seniors has never been a problem for Pfeifer. HSF head coach Eric Kessler credits Pfeifer's humility on and off the court for the quick development between the seniors and their underclassman teammate.

"Tanner is so humble and just fits in well," Kessler said. "(The seniors) just realize how good of a player he is and what he does. We have unselfish guys, and Tanner just fits into that as well. He knows his role and respects the seniors."

Given the system that St. Francis runs, Pfeifer has plenty of opportunities to get to the rim. The Flyers like to play up tempo, leading to a lot of scoring opportunities.

Pfeifer utilizies his speed both to force turnovers and speed away to open passing lanes on the other end when his teammates come up with a giveaway.

"He kind of knows what's going on," Kessler said. "His defense leads to a lot of our offense, whether it's him stealing the ball and getting layups or we get steals and they're able to get it out to him up there. That's the kind of of guy Tanner is, giving others credit. He has done such a great job."

Though carving out a role among an experienced group is no easy task for any sophomore, Kessler always kind of expected Pfeifer to find his way. He showed flashes of brillance last season that have become more of the norm this season.

"Tanner did some nice things last year as a freshman," Kessler said. "This year, he's just been fabulous, and it starts with his defense. He is relentless up there. We've had a lot of good ones up there, and he's got potential to really be special up there."

Coming into this season, Pfeifer said he planned on playing a big role because that's what success would require. St. Francis made it to state again for the second time in three years but hasn't made it out of the first round since the 2016 state championship season.

Tanner said Trevor carried much of the weight last year, a weight he wanted to help shoulder in order to make the team more dynamic. But that wasn't immediately obvious on the offensive end.

When practices began and Kessler inserted Tanner to the top of the 1-3-1, the choice became clear.

"He really plays well defensively, and he's a guy that does all the little things right," Kessler said. "He crashes the glass, plays with a lot of emotion and desire and is very coachable. I thought he'd have a big year, and he's really started off the year really well so far."

Tanner's love for basketball started an early age playing one-on-one against his brother. While Trevor normally used his size and experience to his advantage, Tanner learned many valuable lesson and sharpened his competitive spirit.

"It was always competitive," Tanner said. "He'd always win, but I'd always give it my best, and that's probably where I got most of my hustle because I hated losing."

Pfeifer had a season-high 26 points during an 86-33 win over Riverside and has scored 20 or more six times.

At No. 2 in Class D-2 according to the Lincoln Journal Star, with most of the team back that went to state last season and after tasting state championship success this fall, repeating grid iron success on the hardwood is a definite possibility.

St. Francis already had the returning talent for a return trip to Lincoln, but now the Flyers look like one of favorites thanks to the quick ascension of their super sophomore.

"I didn't expect him to play a lot last year and he did a great job," Kessler said. "This year, he's gotten bigger and stronger and more confident with what he was doing. He's just continued to develop his game. It's going to be fun to watch him as he goes through his high school career."

Peter Huguenin and Nate Tenopir are a sports reporter and the sports editor for The Columbus Telegram. Reach them via email at sports@columbustelegram.com

The No. 1 Humphrey St. Francis Flyer boys rolled over two more opponents and moved to 12-0 on the season with wins Friday over Howells-Dodge a…

Humphrey St. Francis boys and basketball returned from a week away without any signs of rust in back-to-back home contest victories Friday and…

After winning the state tournament last March, Wynot came into this season ranked No. 1 in Class D-2 by the Lincoln Journal Star with most of …

Humphrey St. Francis sophomore Tanner Pfeifer poses for a photo after practice last week. Pfeifer leads the Flyers in scoring for a program that features seven seniors and has gone 11-0 entering the weekend.

Sophomore Tanner Pfeifer breaks away with a steal during a game this season. Pfeifer's defensive ability at the top of Humphrey St. Francis' 1-3-1 zone defense has allowed the sophomore to find a starting role and find success.