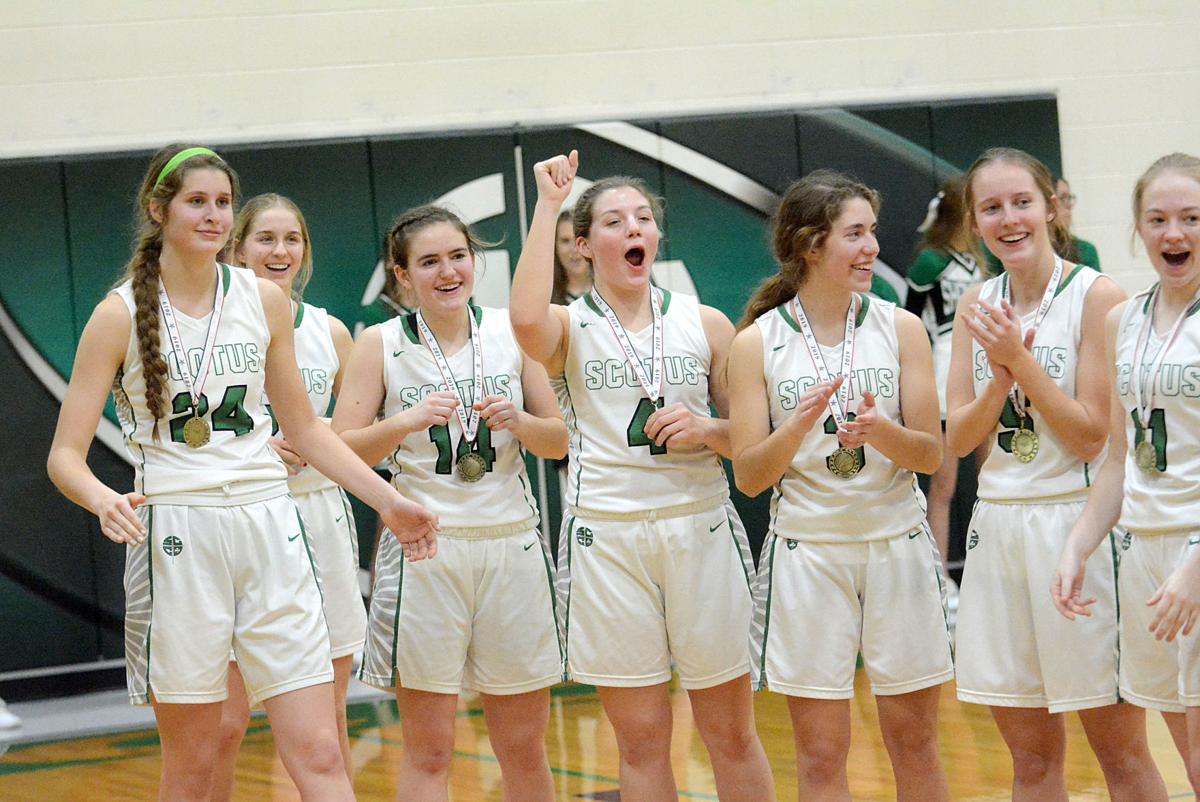 Members of the Scotus girls basketball team cheer a teammate during the medal ceremony of the Columbus Holiday Tournament this past December. 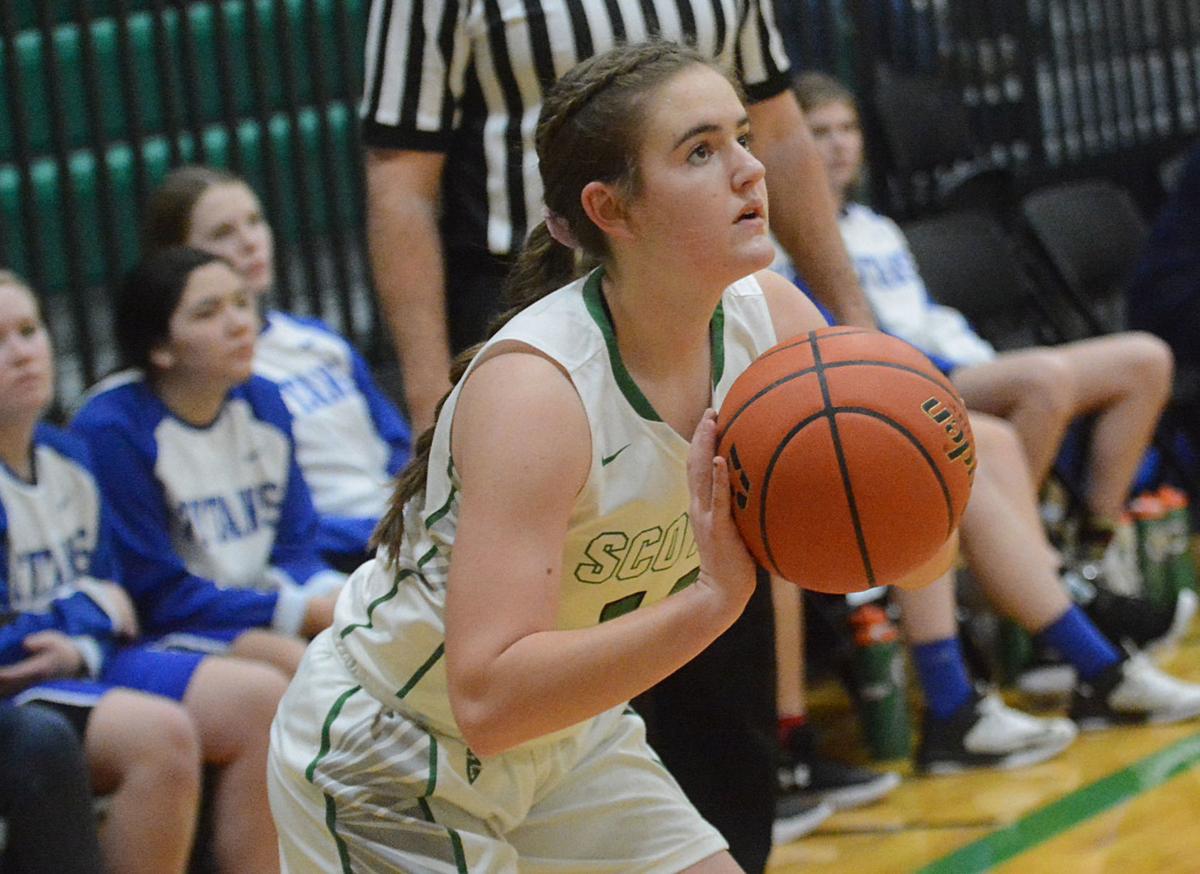 Scotus junior Camille Pelan spots up for a 3-pointer in a game earlier this season. Pelan was the top Shamrock scorer this season but often struggled to make shots and find open shots when a second scoring option never emerged.

But, for as important as defense is, so too is another fundamental part of the game - putting the ball in the hoop.

The Shamrocks finished 11-12 in a season where they managed just over 35 points per game. Five times they failed to score 30 or more, and one of those came in a win.

But by the end of the season, regardless of who was on the floor, scoring remained an issue.

Thus, so did winning. Scotus fell five games below .500 at one point before a strong finish came to an end in the subdistrict final.

Regardless, while the results weren't always a source of satisfaction, coach Jarrod Ridder said his group stuck together. That bond allowed the Shamrocks to come out the other side a better team and better teammates.

"We didn't do a whole lot of winning. But when you came to our practices or came to the gym, you never would tell," Ridder said. "Based on their work ethic and their attitude, you would never know whether we won by 20 last night or lost by 20. They just kept showing up and wanting to make themselves better."

Ridder and his staff had a suspicion before the season began that scoring had the potential to dog the team all year. Though Pelan was back, the offense was in need of a new point guard and suddenly reliant on players to score 8-12 points per game that were accustomed to playing backup and only chipping in 2-4 points per game in the past.

Putting all of that together and finding success was expected to be a work in progress.

Unfortunately, there was no easing into it set of games to allow the team to develop.

Though 1-2 at the time, it seemed the attitude was, so far, so good. The Shamrocks lost two of the next three but then won the holiday tournament with totals of 64 and 70.

Perhaps, SCC was on track.

But the next three weeks included losses in six of seven and only one total at or above 40 points.

"I thought we took good shots. We got around the rim but we didn't finish, and we didn't make nearly a high enough percentage from 3 as I thought we would make," Ridder said. "I thought we got good shots. I thought the kids did everything they could to put themselves in position to make shots; we just didn't get them to fall."

Though Ridder credited his team for taking the right shots, there's no doubt there was a significant lack of easier shots because no true second scorer ever developed.

Pelan, after setting single-game, single-season and career marks already as a sophomore from 3-point range, was the focus of the opposition every night.

But because a second option was in question night in and night out, defenses could face guard Pelan, deny passes in her direction and force other players to score.

Several did, and several had big performances, but not often enough to give Plean more space to operate.

"As a whole, every night, you probably didn't know with our team where the points were going to come from," Ridder said. "All of our kids were capable, and they did throughout the season, of putting up numbers and scoring points. But for us as a team, coaching staff included, it was just the consistency of it. You never knew where it was going to come from.

Still, while the players and coaches might have been pounding their heads against the wall at times, no one lost focus.

Scotus couldn't score, but it could get stops. The Shamrocks ended the season allowing 10 fewer points overall and also averaging about 35 points against.

They won six of their last eight and held Saint Paul to only 38 in the subdistrict final.

Scotus scored 26 second-half points in a win over Fremont Bergan, Pelan sank seven 3-pointers and broke her own school record in a win over Omaha Concordia, the defense dominated Aquinas and limited the Monarchs to 17 in a win, held Kearney Catholic to 22, Chohon scored 19 in an overtime win at Lakeview and Obert scored 10 of her 12 as the Shamrocks won in the subdistrict opener.

The season came to an end when Scotus trailed Saint Paul by 14 in the second half of the subdistrict final, cut it to one late in the fourth but turned it over and watched the Wildcats hit 4 of 6 from the foul line.

Scotus played 14 games against teams at or above .500, and, in addition to Saint Cecilia and GICC early, played district finalists Humprey/Lindsay Holy Family and Twin River and C-1 state champion North Bend.

"It's crazy to think but, we beat Saint Paul then we beat Chadron and we're at the state tournament," Ridder said.

Setting the goal as state for next season would be lofty at this point. But as poor as Scotus was scoring, there's really only one way to go from there. Based on most team experiences, the Shamrocks should shoot the ball better from everywhere on the court and, with the development of Steffensmeier on the inside, create more shots inside.

That plus Chohon having a year at the point under her belt and a roster that could allow for a deeper bench and a pressure defense, Scotus may not be far off of dreaming about Lincoln.

"You've just got to think that we'll shoot the ball better from the perimeter. Even Camille, if you take four games away, she shoots just 22 percent," Ridder said. "You've got to think we'll be better in all those areas with Camille and Janae and Clarissa and Ava, and, we just had a hard time getting a layup.

"You're just one or two shots away in a lot of different games from your season going a lot different."

Members of the Scotus girls basketball team cheer a teammate during the medal ceremony of the Columbus Holiday Tournament this past December.

Scotus junior Camille Pelan spots up for a 3-pointer in a game earlier this season. Pelan was the top Shamrock scorer this season but often struggled to make shots and find open shots when a second scoring option never emerged.