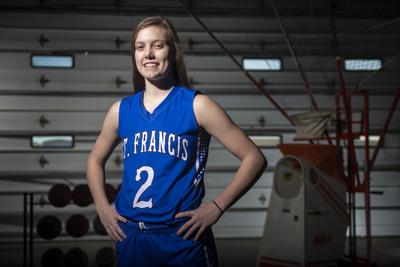 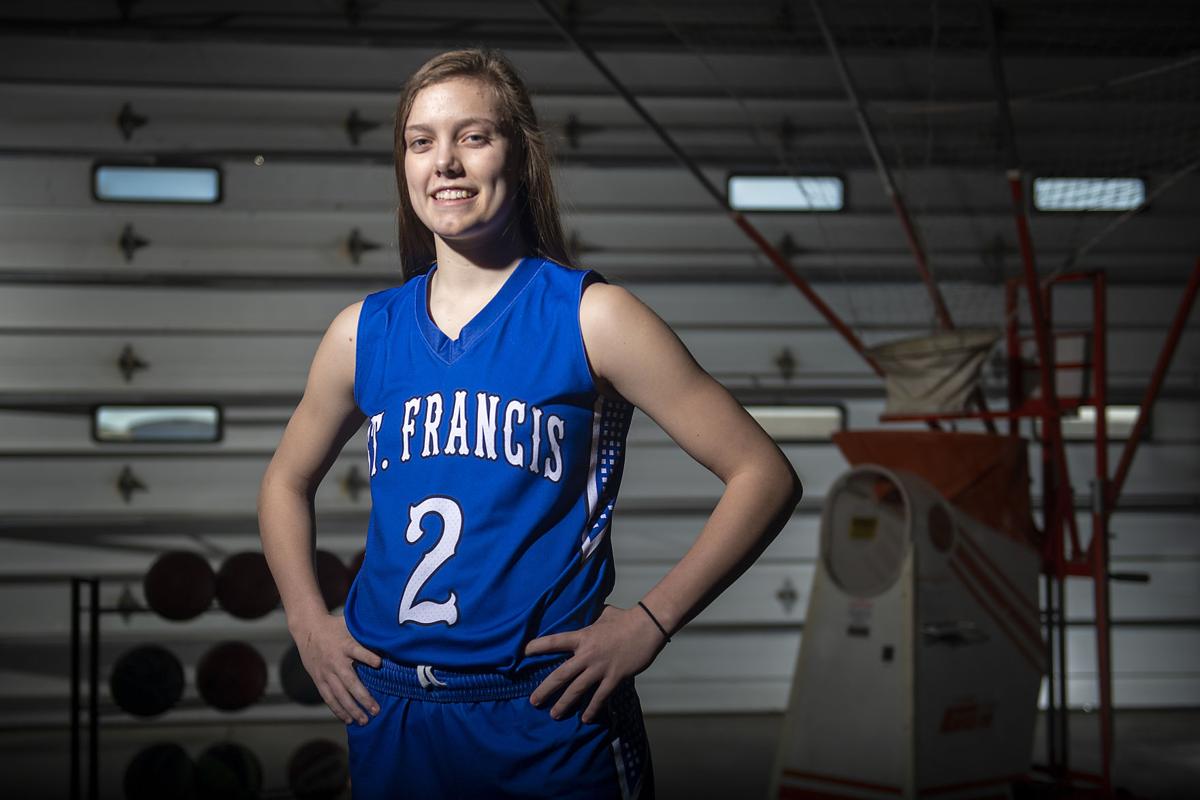 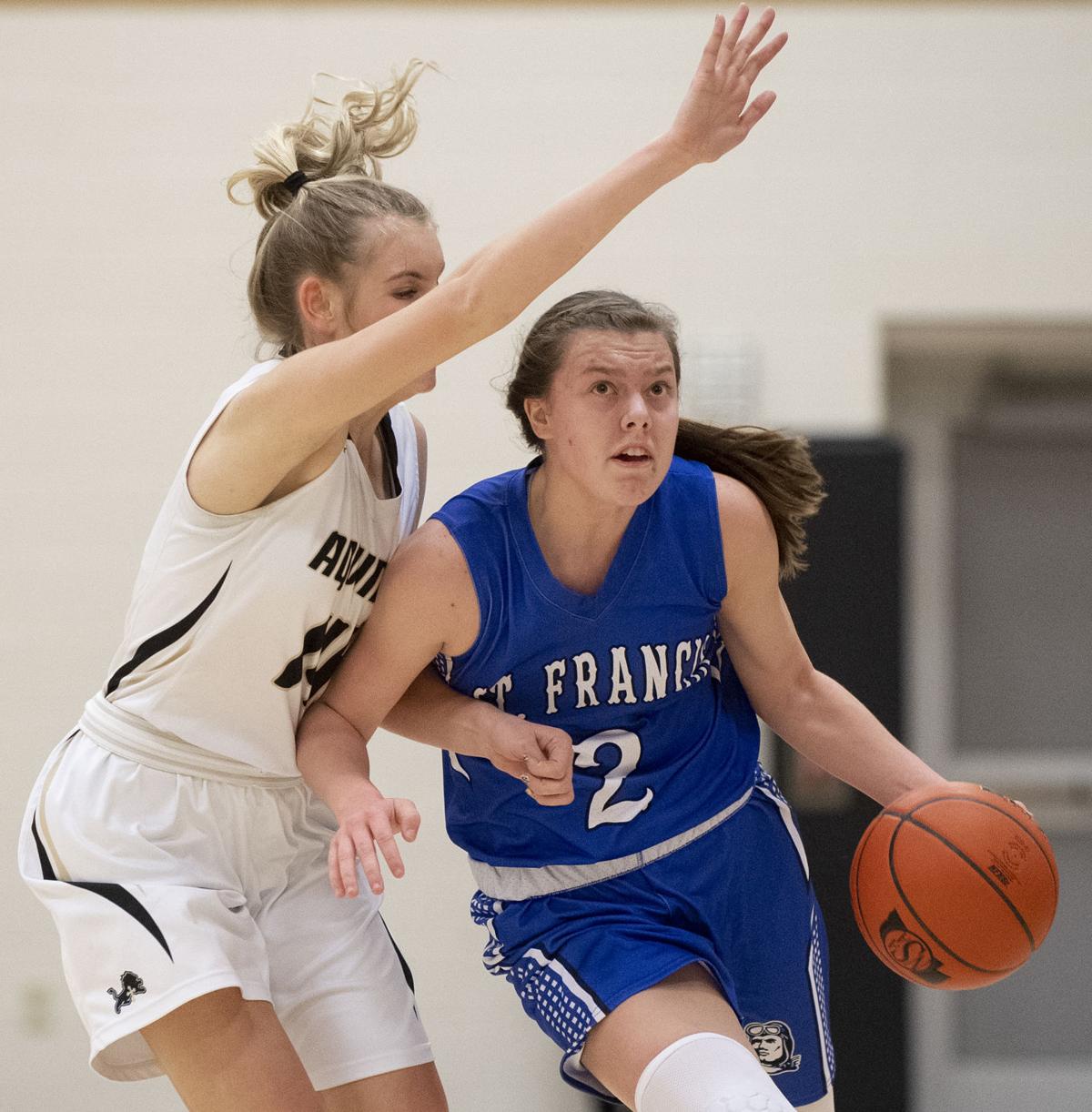 Humphrey St. Francis' Allison Weidner (right) watches the scoreboard as time runs down in the first half as she defended by Aquinas Catholic's Jadyn Siroky on Tuesday at Aquinas High School. 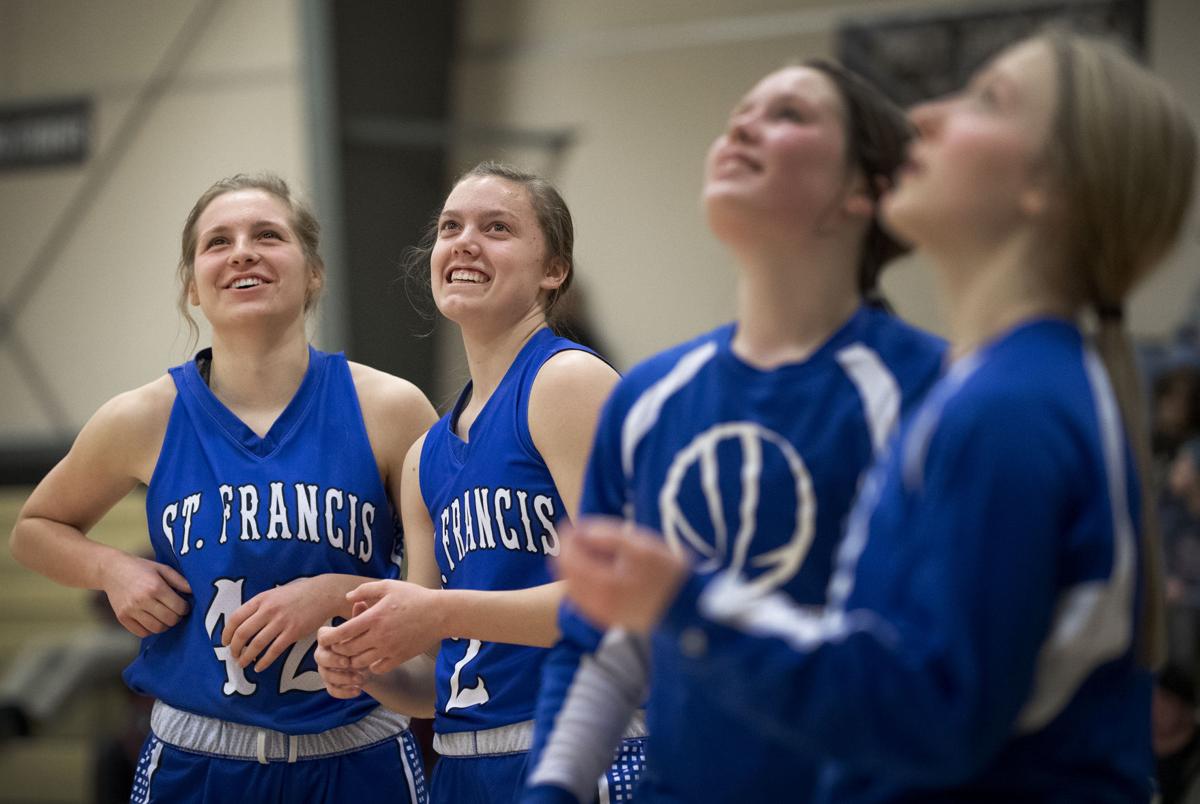 The team motto is "Rebound and go."

When the Humphrey St. Francis girls force a missed shot, the goal is to quickly push the ball up the court. This is when Allison Weidner does her best work.

Her eyes locked on the opposite end of the court Tuesday in a game at Aquinas, Weidner fired a pass from near the opposing free-throw line to a small window on the left side of the St. Francis basket. Initially, there didn't appear to be anyone open when Weidner released the ball, but a teammate emerged behind the Aquinas defense and was hit in stride for a layup.

Like a quarterback throwing a wide receiver open on a football field, Weidner saw it all the way.

"I played football with my brothers," the junior point guard said of her growth as a passer. "My second-oldest brother was a quarterback, so I would run routes for him."

In a basketball kind of way, Weidner is Humphrey St. Francis' quarterback. She runs the engine for the Class D-2 No. 1 Flyers in small-school gyms, and has no limits.

Her game draws the attention of opponents, and last summer, it started drawing the attention of several Division I schools, leading to scholarship offers. That included Amy Williams and Nebraska.

Before the start of season, Weidner committed to the Huskers, proving again that small-town kids (Humphrey has about 800 residents) can reach the big time.

"It was a big deal," St. Francis coach Bryan Reichmuth said of the community reaction. "She's got a pretty big fan club back there."

Though it wasn't until last summer when Weidner's recruitment blew up, the 5-foot-9 guard grew up wanting to play Division I basketball. Living in a small community did not diminish that hope.

"She's just driven to no end," her coach says.

When Weidner was a student manager for the Flyers basketball team, she'd do drills off to the side of the court while the high school team practiced. She also heard that varsity coach Reichmuth never started freshmen.

But when the 2017-18 season began, a freshman was starting at point for the Flyers, who reached the D-2 state final that season.

"(She) would have started as an eighth grader on our team," Reichmuth said. "She was that good."

It didn't take long for Weidner to make an impact. She averaged 14.5 points her first season, and 19.7 as a sophomore.

And then there was a summer breakthrough. Playing for All Nebraska Attack, Weidner got a chance to compete against some of the nation's top high school players. It exposed Weidner to another level of play. She held her own, and her self-confidence jumped.

"In junior high there was a little phase I had that I was like, 'I don't know if this is just a dream,'" Weidner said of her Division I hopes. "If I could turn it into a reality or not because I didn't see a lot of small-town girls getting attention. But Nebraska Attack came along and it's really changed since then."

Weidner brings a lot to the table. She's super-athletic, quick and can generate space. She can score in a variety of ways and averages nearly 25 points per game. She makes her teammates around her better. She can make just about every pass. She plays outstanding defense. Her court vision is astounding, Reichmuth said.

When it comes to game-planning against her, "I think it's nearly impossible," Aquinas coach Nathan Wells says.

In the Humphrey St. Francis holiday tournament, defending state champion Wynot wanted to play up on Weidner defensively. She attacked the basket and scored 35 points.

The next day, Crofton, a state title contender in Class C-2, schemed to make sure Weidner did not drive to the basket, so the Warriors sagged. Weidner heated up from the outside and scored 38.

"She's always had scoring ability," Reichmuth said. "Freshman and sophomore year, she's probably pass first, shoot second, and she still is to some extent, but when she gets in a groove, she can score a lot of points in a hurry."

Ron Powell: With expansion to nine Class A schools, it's time for Lincoln to form its own conference

Reichmuth calls Weidner a student of the game. She watches film, including in the offseason.

She's constantly working on her shot in her dad's shop, where a shooting machine is set up and court lines are painted.

After getting home from school, Weidner will head to the shop and put up between 200 to 300 shots. She'll then do some homework before heading to practice at 5:45 p.m.

Despite setting herself apart on the court and in recruiting, Weidner remains team-driven. She wants to lead the Flyers to a state championship.

Sure, club ball led to a busy summer, but Weidner didn't miss team activities back home, making sure to lift weights and attend every team camp.

Weidner thrives in a team atmosphere.

"She could win a state title in cross country," Reichmuth said of Weidner, who is a 400- and 800-meter state track champion and was an all-state performer in volleyball for the 2019 state runner-up Flyers. "Her more natural sport would be cross country, (but) she just wants to be part of a team and make everybody great."

That is clear on the basketball floor, where Weidner averages 6.5 assists per game, zipping passes from all parts of the court.

"I get a much better feeling inside when I get that assist rather than scoring," she said.

Some goals have been reached. Starting as a freshman. Committing to Nebraska. Leaving school as St. Francis' all-time leading scorer also has been checked off.

But some big goals remain. The Flyers (18-2) want to win a D-2 state championship. Then eventually, Weidner wants to show the Big Ten what a kid from Humphrey, USA, can do on the court.

"One question I get often is where is Allison's ceiling, and I just don't see it" Reichmuth said. "I really believe she's going to have great success at the next level because she's so driven. She's going to do it."

Reach Clark Grell at 402-473-2639 or cgrell@journalstar.com. On Twitter at @LJSSportsGrell.

Humphrey St. Francis' Allison Weidner (right) watches the scoreboard as time runs down in the first half as she defended by Aquinas Catholic's Jadyn Siroky on Tuesday at Aquinas High School.