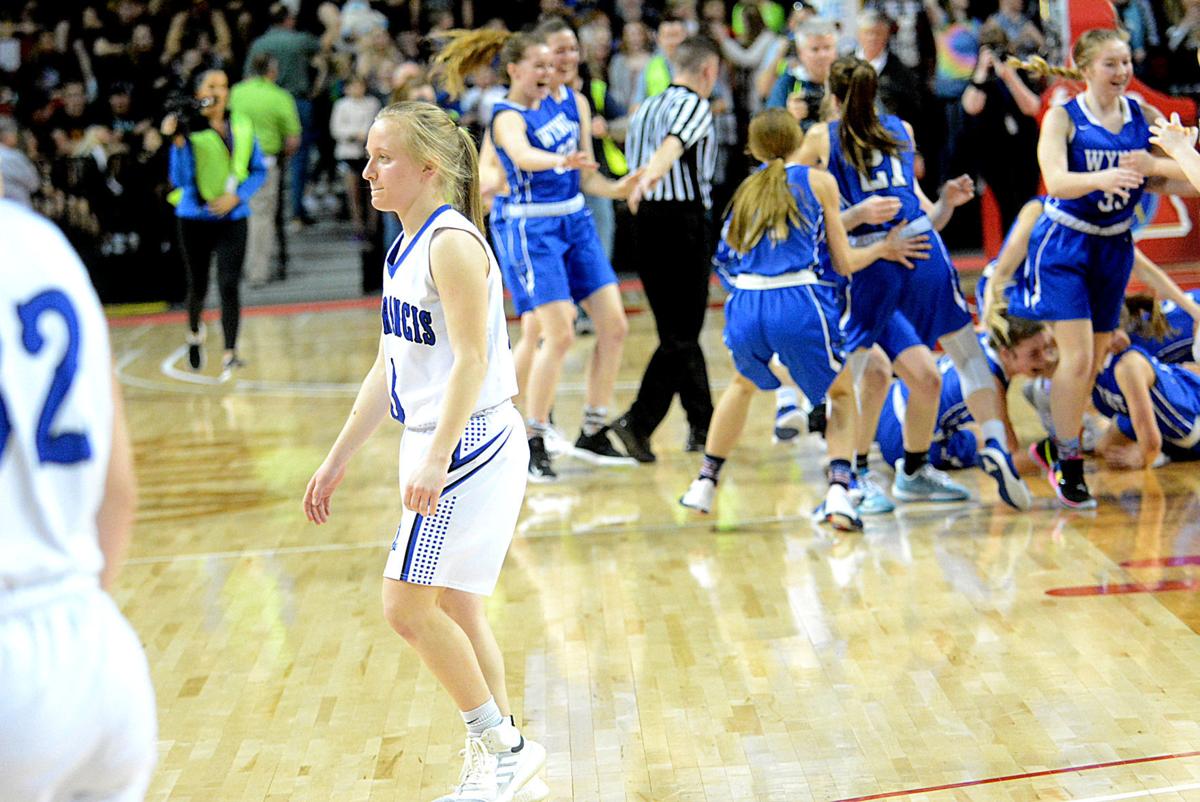 Humphrey Saint Francis freshman Emma Baumgart walks off the court to her bench as Wynot celebrates in the background on Saturday in Lincoln. The Flyer girls were defeated by the Blue Devils 59-51 for a second runner-up basketball finish in the last two years. 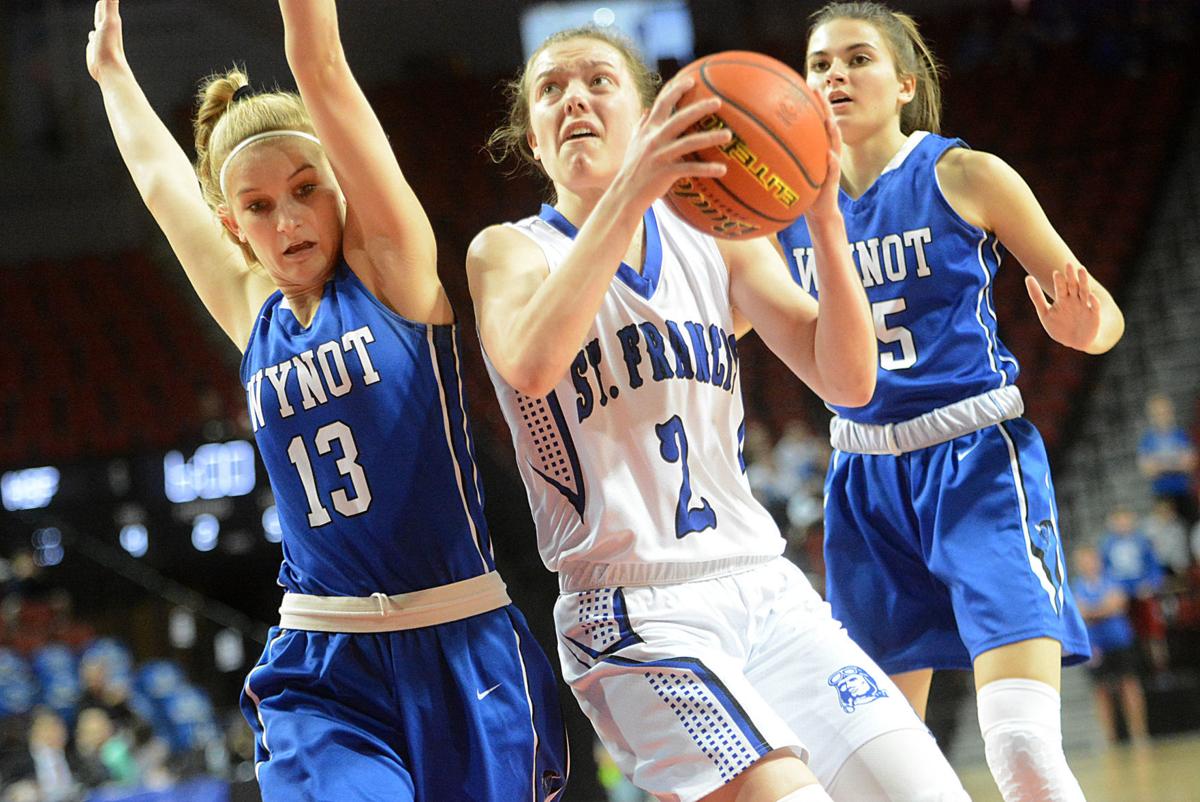 Saint Francis junior Allison Weidner draws contact and a foul on her way to the hoop in Saturday's state championship game. Weidner scored 24 but couldn't quite push the Flyers over the finish line. 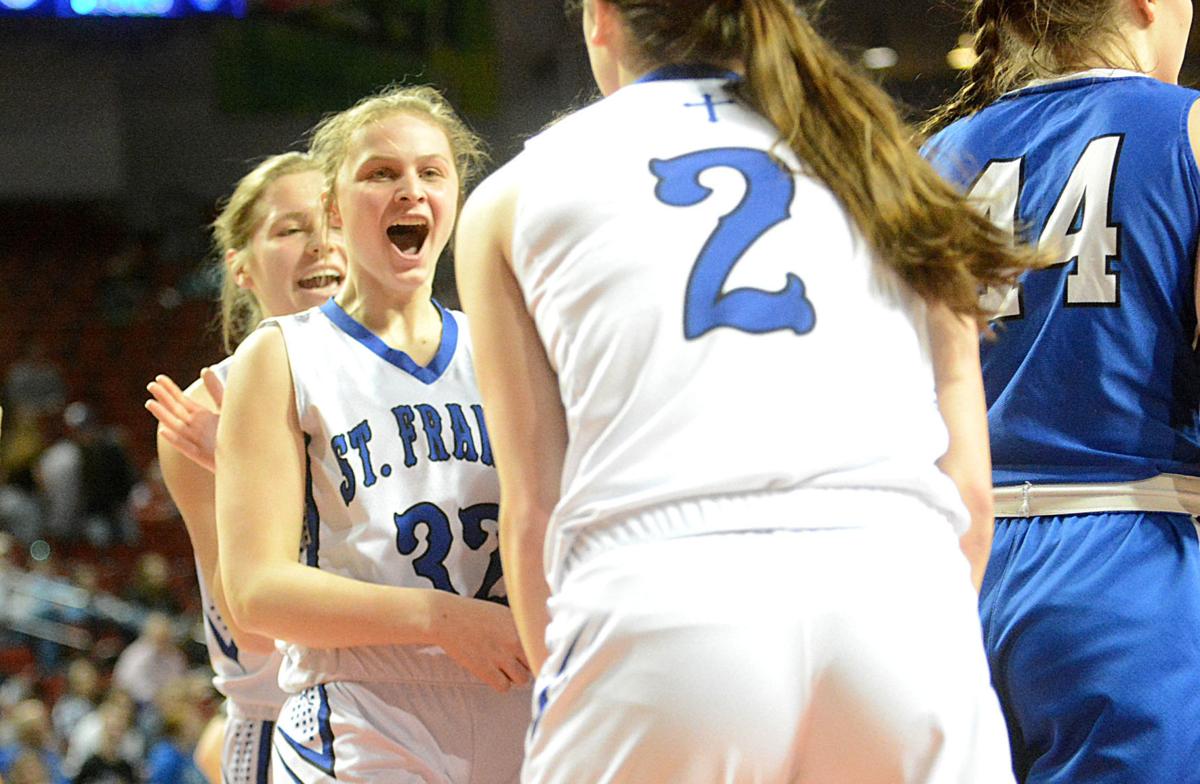 St. Francis sophomore Kaylee Stricklin directs a yell to teammate Allison Weidner (2) after Weidner drove the lane for a layup and a foul in Saturday's D-2 state championship. 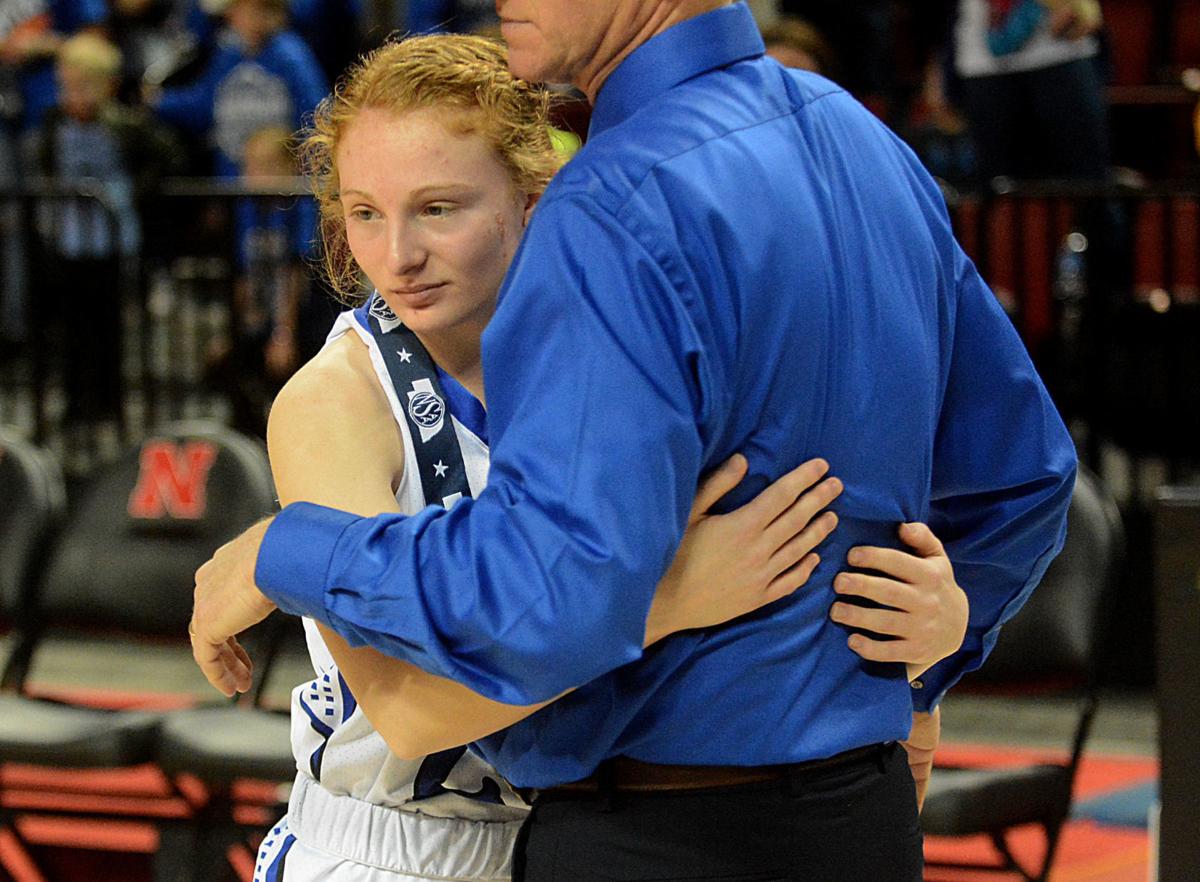 The tradition continued for the Humphrey Saint Francis girls on Saturday afternoon at Pinnacle Bank Arena, one they'd rather not keep going.

For the second time in three years, the Flyers accepted a state basketball runner-up trophy with a 59-51 loss to Wynot. Saint Francis was the 2018 runner-up to Falls City Sacred Heart 57-51.

It was also the second time in four months Saint Francis has come up short in a title game, accepting second-place medals this past November following a volleyball championship loss to BDS.

That one included a dramatic two-sets-to-one comeback and a near miracle fifth-set comeback by saving five straight match points before heartbreak. This most recent heartbreak came with less late drama. Wynot led by one with less than four minutes remaining then scored 13 of the final 18 points.

The Blue Devils, now eight-time state champions, have built their success on a defensive identity of tenacity, aggressiveness and, if you're on the other side of it, downright irritation.

That was the case again on Saturday when Wynot held St. Francis to its lowest offensive output of the season and held junior point guard Allison Weidner just under her 25-point average.

"They had us out of sync offensively a lot of the game. Their pressure is just fantastic," coach Bryan Reichmuth said. "That's a great basketball team that beat us. We knew it was going to be a dogfight."

Weidner scored 24 points but was hounded all 94 feet of the floor and often double-teamed on the perimeter. Blue Devil defenders denied even a look at a return pass once she gave the basketball away.

Weidner scored the first six points of the game, and St. Francis seemed poised to build a big early lead, but she picked up her second foul with 2:32 left in the quarter and went to the bench.

There was a lot of the game remaining, and Wynot certainly wasn't going to be knocked out in the first round. But that brief break of 2 and 1/2 minutes without Weidner on the floor seemed to allow the Blue Devils to catch their breath and get the defense on track.

"It's just so hard to adjust to. They run waves of people at you," Reichmuth said. ..."They're so good. It's just tough. They're just riding Allison all the way."

The two teams met in the St. Francis Holiday Tournament on Dec. 27 where Weidner scored 35 and the Flyers won by 16.

HSF led that one for the final three quarters and consistently built on their advantage. This time around, the Flyers were in an extremely unfamiliar position, trailing for long stretches of the second half.

The stat sheet showed St. Francis trialing for 17:12 of game time, which might have been more than the combined amount of time the Flyers trailed all year.

Weidner gave her side a 36-33 lead with an offensive putback midway through the third quarter before Wynot scored the final six points of the frame. The Blue Devils never trailed the rest of the way and held Weidner to just two more points.

"This time, compared to earlier in the season, they were a lot more focused on me, and a lot more well-rounded," Weidner said. ..."They've improved a lot from the first time we've played them, and they're great defenders. They're known for their defense. They're really good at it."

Wynot held opponents to just over 30 points on average before Saturday afternoon, limited Falls City Sacred Heart to 27 on Friday and only gave up 50 points three times all season - Saturday, in the first game against the Flyers and to C-2 finalist Ponca on Jan. 30.

"At the end of the day, our offense was a little stagnant. They'd push us way out and we were a little bit out of sync," Reichmuth said. "We made a little run there at the end to get it tied up. We just couldn't finish it up."

St. Francis trailed by four late in the first half when Alissa Kosch knocked down a 3-pointer and Kyliegh Sjuts made 1 of 2 free throws. Tied 26-26 at the break, a Caitlin Jarosz free throw and Weidner steal and bucket made it a 7-0 run from one half to the next.

Wynot answered back with the final six points of the third and took a 39-36 lead into the fourth. The Blue Devils were up six midway through when Jarosz scored four straight and Kaylee Stricklin then cut it to one on a free throw.

The Flyers tried a full-court press following Stricklin's make but paid for it when Blue Devil freshman Amber Lawson hit a 3. Jarsoz answered with another bucket following another great find by Weidner, but Wynot scored the next eight straight from the free throw line. St. Francis missed four straight shots and turned it over once while Wynot pulled away.

Lauren Pfeifer gave the Flyers some life with a 3, cutting the deficit to six with under a minute to play, and the Blue Devils missed two straight free throws, but Weidner then fouled out with 21 seconds showing on the scoreboard.

"I've got another year. We're losing a few people in volleyball, a few people in basketball, but we've got some key people coming up that will fill their shoes," Weidner said. "I have no doubt."

St. Francis was looking for its first girls basketball championship since 2007 in its eighth championship game. The Flyers are now 3-5 all-time in title games.

Wynot's win was the fourth time its won back-to-back titles counting three in a row from 2011 to 2014. Either Wynot or Sacred Heart has won each of the past 10 girls D-2 state championships.

"Let's not forget, it's quite an accomplishment to get this far, too," Reichmuth said.

Allison Weidner scored a career-high 39 and Humphrey St. Francis qualified for its second state title game in three years with a 68-38 win ove…

Of course, Humphrey Saint Francis players and coaches were focused on Mullen and winning a semifinal matchup with the Broncos on Friday aftern…

Saint Francis Girls: On another level

Amy Williams would no doubt have preferred to have still been in Indianapolis. But Friday afternoon wasn't too bad of a consolation.

Humphrey St. Francis execution and defense wasn't great in the fourth quarter of Thursday's first round D-2 matchup with Sterling at Lincoln S…

You would think that with the way Humphrey St. Francis normally ends the first eight minutes of almost every game, coach Bryan Reichmuth and t…

Humphrey Saint Francis freshman Emma Baumgart walks off the court to her bench as Wynot celebrates in the background on Saturday in Lincoln. The Flyer girls were defeated by the Blue Devils 59-51 for a second runner-up basketball finish in the last two years.

Saint Francis junior Allison Weidner draws contact and a foul on her way to the hoop in Saturday's state championship game. Weidner scored 24 but couldn't quite push the Flyers over the finish line.

St. Francis sophomore Kaylee Stricklin directs a yell to teammate Allison Weidner (2) after Weidner drove the lane for a layup and a foul in Saturday's D-2 state championship.