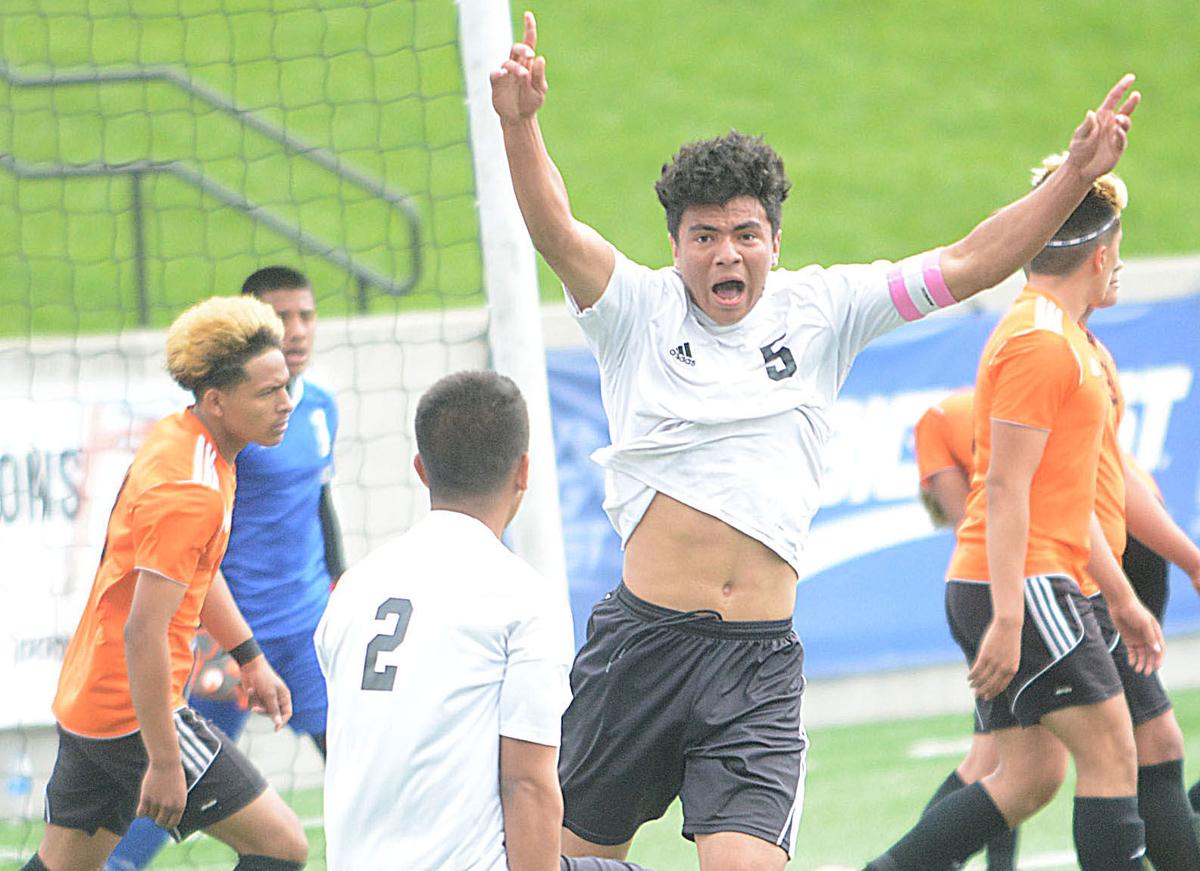 Ivan Rios-Lopez looks to the Columbus High section of the crowd and runs to teammate Adrian Pedroza after scoring the first goal in the state semfinal win over Lexington. 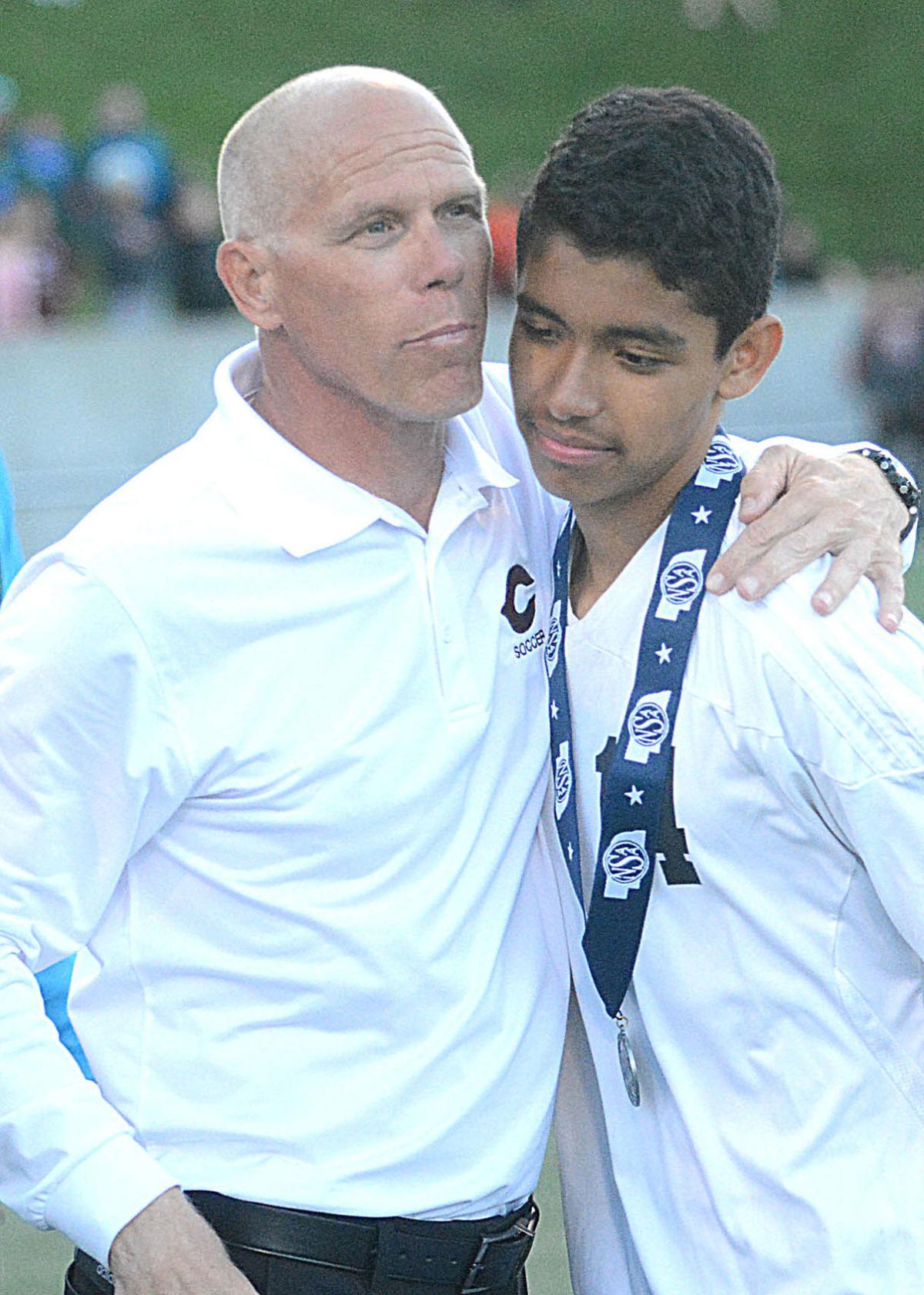 Coach John Arlt hugs Jose Gallardo after presenting him with a sliver medal after the state championship match.

Just over two months following a loss in the Class B state championship soccer match, coach John Arlt says his emotions have remained mostly unchanged about that fateful night in Omaha.

Though Columbus High came up short to Omaha Skutt in penalty kicks, and losing at that level is difficult to put into words, most coaches and players agreed afterward that the sense of pride for earning a spot in the match outweighed the sadness of coming up short.

At open field games this summer, Arlt hasn't seen anything from his returning players to indicate otherwise. They'll always be disappointed by the loss, but beginning the season unheralded, unnoticed and unimportant, to most outside observers, made the journey that much more satisfying, regardless of the ending.

And with the soccer program, and all other CHS Class B programs, moving back into Class A this upcoming school year, that drought may extend well into the future.

Regardless, Arlt and the Discoverers remain hopeful. Though they wanted to be the ones to win the first-ever Columbus High soccer championship and put an end to 47 years of school frustration, the belief in Discoverer soccer remains steady.

While other CHS programs may initially struggle adjusting to Class A, soccer may be where Columbus still has its best shot.

Moments like that Monday night at Morrison Stadium may be harder to come by, but if any program has the best chance to recreate another, soccer may be it.

"You look back and you say, we were really, really close, we played well enough to win, maybe, and it becomes a lot more difficult now moving up into Class A, but we had a great season," Arlt said "We had a good team unity, which I think can carry over to next year, and from the standpoint of competing, our schedule doesn't change. If we make the state tournament, that's when it becomes a lot more difficult.

"I want to believe that we have the capability to compete with most teams in Class A. The top three or four might be a different story."

This spring was the 12th trip to the state tournament in the history of Columbus boys soccer. After three straight years of 12 or more wins, the Discoverers dipped somewhat in 2018 and finished 8-6.

Though leading returning scorer Ivan Rios-Lopez was back, gone was a senior class that accounted for 17 of the team's 33 goals.

A new crop of defenders, midfielder and forwards had to step into those positions and try to keep their heads above water while learning how to catch up to the learning curve that is varsity soccer.

They did much more than that. Columbus started the season 9-1 and quickly jumped into the Class B rankings.

The Discoverers then suffered a loss to Lexington and went 2-3 down the stretch including a 1-0 overtime loss to crosstown rival Scotus in the sub-district final. But because Columbus had put together such a successful regular season, CHS found itself hosting a sub-state final and winning over Elkhorn Mount Michael for a trip to state.

There, Columbus won a dramatic, late-night match over Omaha Gross, took a 2-0 lead early on and held on for a 2-1 revenge victory over Lexington in the semifinals before Skutt ended the CHS season one win short of a title in a championship match that took a 5-3 penalty-kick final before the Skyhawks claimed the victory.

Though there were Columbus heads hung low, none of the players shed any tears. It was tough, but also a moment full of pride.

One the Discoverers hope to get another shot at sometime soon.

"I don't get the sense from the players returning, myself included, that we can't get over it, that we're distraught," Arlt said. "I look at it from my standpoint and say, 'Could I have done something differently?' You always second guess yourself. But I don't think the players feel that way at all. I think they feel like we had a really good chance."

How likely is that chance in the future? Arlt said it remains strong.

Moving to Class A requires a balance in scheduling. The Discoverers will have to up their level of play in order to compete with Omaha and Lincoln schools, but constantly facing those teams and suffering losses also doesn't help in wildcard points.

Plus, few Omaha and Lincoln schools want to come to Columbus when there's enough competition right down the street.

Thus, the Discoverers will likely retain the same type of schedule they'll have this year, one that features six or seven Class A opponents.

Continuing the current level of success, amassing 10 wins or more in a season, should keep put Columbus high enough in the standings to host a sub-state final. Win that, get to state and see what happens against the best of the best.

"We always look at it very year in Class B, where we would be if we were in Class A. This year we would have been number five in the power rankings," Arlt said. "This coming year, we'll have a chance to get to state, whether it's by earning it and winning a district or wild card because I expect us to be pretty strong.

"Now, the breaks may not go our way this year, but that's going to be our goal going in - get there and let it take care of itself."

And as far as the drought is concerned, Alrt said its rarely, if ever, mentioned.

"I don't think there's any pressure on the kids. I know I would like (to see a state title) because since tennis and wrestling have won state titles, the school has had seven, eight runners-up. That part gets a little frustrating," he said. "From a school standpoint, I think it would be fantastic if just one of the teams could win a title.

"But it doesn't define us, either."

Nate Tenopir is the sports editor of The Columbus Telegram. Reach him via email at sports@columbustelegram.com

Ivan Rios-Lopez looks to the Columbus High section of the crowd and runs to teammate Adrian Pedroza after scoring the first goal in the state semfinal win over Lexington.

Coach John Arlt hugs Jose Gallardo after presenting him with a sliver medal after the state championship match.