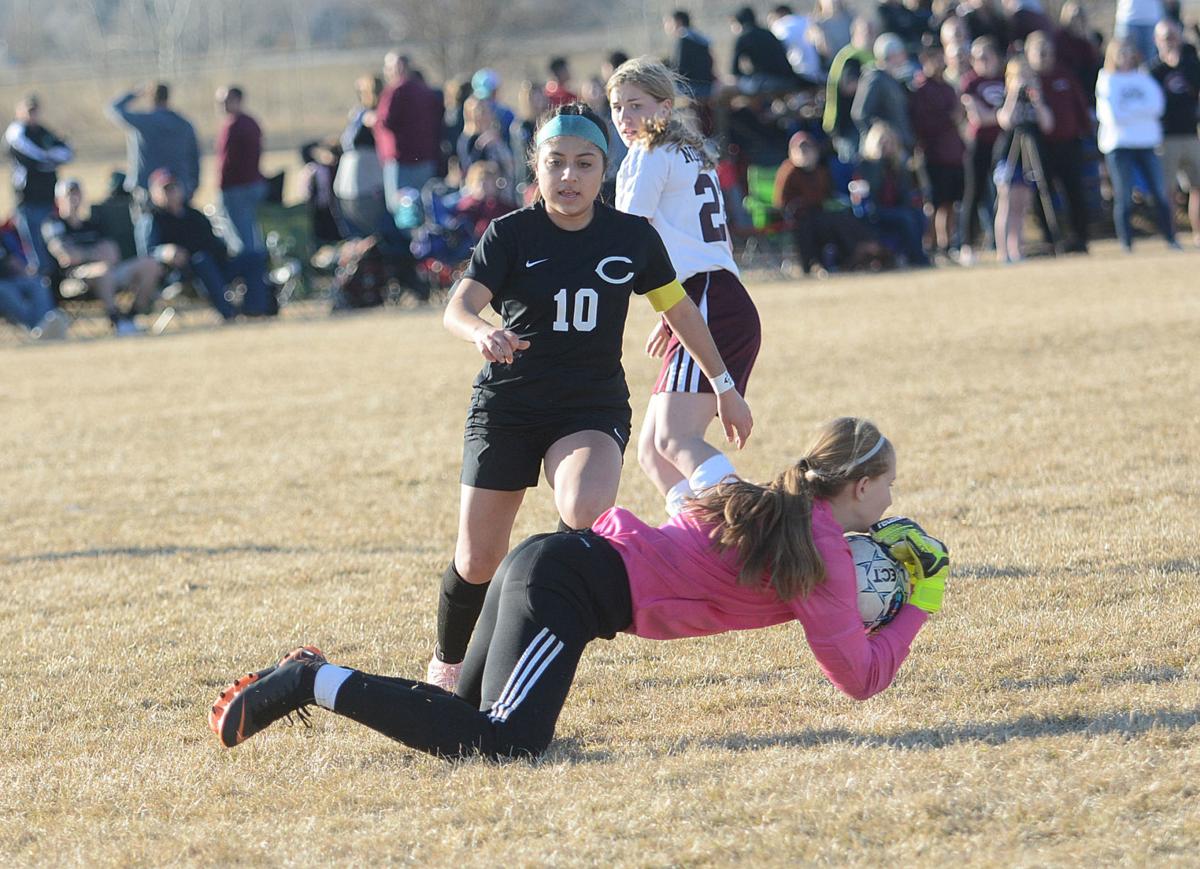 Columbus junior Sofia Gomez-Garcia pulls up short of the goalkeeper while chasing down a pass from a teammate last season. Gomez-Garcia leads a Discoverer team into her senior season looking for a return to the state tournament. 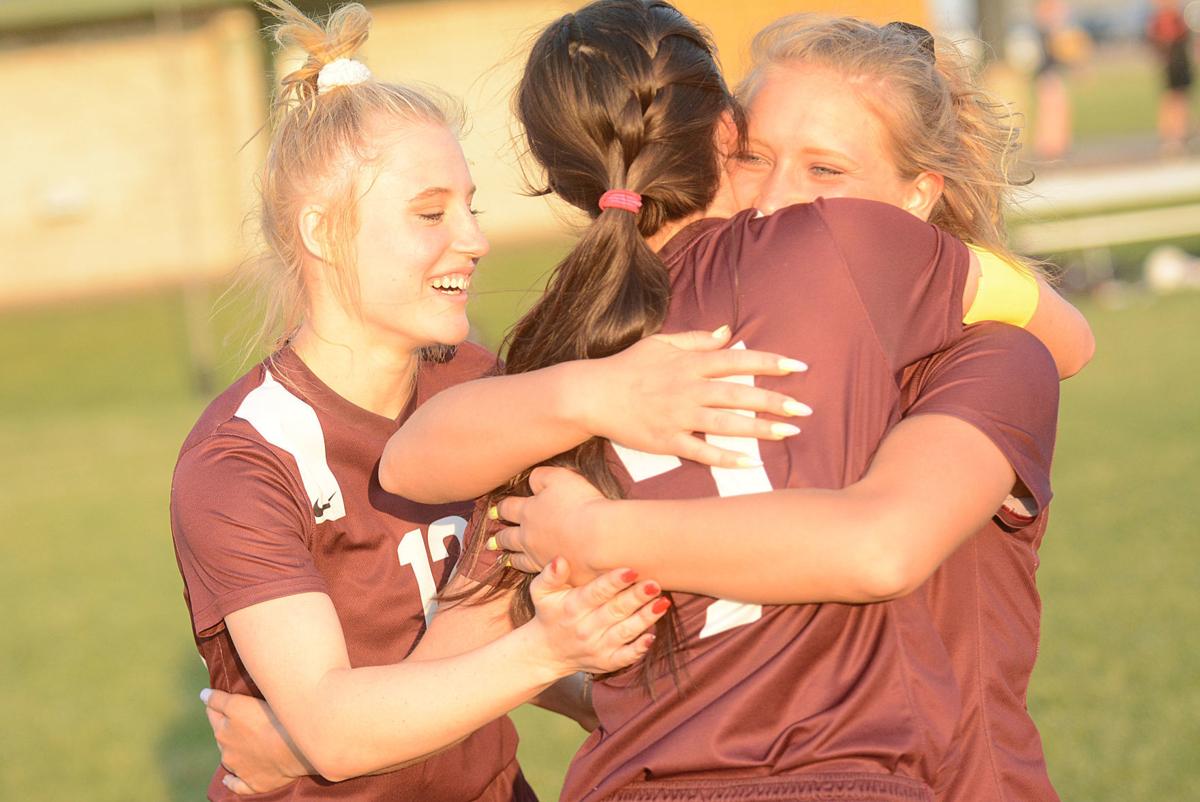 Madison Jenny hugs Macee Trotta while teammate Katelyn Lantis joins in after Trotta scored a goal in the third round of the shootout in a Columbus win over Hastings last season. Jenny and Lantis return as potential team leaders this season.

Editor's note: Although the spring sports season remains in question, the Telegram will continue to provide season previews for each of our teams. Some photos of this year's athletes were acquired before schools were closed. For others, we shall hope to have events to cover in the weeks ahead but will have to rely on file photos in the mean time.

As much as they would like, Columbus High girls soccer players will never forget a certain day of school last year when postseason hopes were ripped out of their grasp.

It was a Friday morning when the final wildcard standings of the season were released by the NSAA. Columbus, coupled with a loss to Scotus in the subdistrict championship and a loss by another team on its schedule, dropped five positions and was suddenly out of the running for the district finals.

CHS defeated Lakeview two days earlier, figured that would be enough regardless of what happened in the subdistrict title, but then the math simply didn't work out.

In a cruel twist of fate, at least from the Columbus perspective, Lakeview, the team CHS had just beaten, took the final district finals spot. The Discoverers, who had played in Omaha in the state tournament the last two years, wouldn't even have the chance to fight for it this time.

Although it's a painful memory it's also one that looks to be the driving force for the new season. Columbus lost just three seniors from that squad, came together that very day of the bad news and decided there would be no more heartbreak. The Discoverers wouldn't leave it up to chance again.

"Literally, when we found out, my heart was broken. I think it was by .1 of a point or something like that. It really sucked, but at the same time, we knew we had a good season," senior Sofia Gomez-Garcia said during the CHS Media Day on March 11.

"It was unfortunate that it happened. But moving forward, all we could think about was having a better season this year."

Perhaps the overall reaction was somewhat muted because Columbus must have realized it just didn't do enough, and, it had had its chances.

CHS played in 10 one-goal games, went 5-5 in those matches, went to overtime six times and as far as a shootout three times. Columbus was 2-1 in overtime and 1-2 in shootouts.

Reversing the fortune of any of those results reverses the wildcard standings.

As it were, Columbus, which only earned 39 points in the subdistrict final loss to Scotus, hurting its overall average, had its average drop by another three points when Bellevue West lost its subdistrict final.

Though Columbus dropped one of those one-goal games to Bellevue West, the defeat was worth 41 points because the Thunderbirds had a winning percentage 75% or better. When they lost in the subdistrict championship and fell to 12-5, that cost the Discoverers three power points - an adjustment to the average Columbus couldn't afford.

But realizing there were so many chances to make the wildcard standings not matter, the team quickly moved away from a pity party to resolve for the next season.

"This wasn’t the end for us. This was just the beginning," Gomez-Garcia said. "We were going to come back stronger."

If that is the case, Gomez-Garcia will be a big reason why. Though one of the smallest players on the pitch, she has built a reputation for intensity and outspokenness.

Gomez-Garcia scored a lone goal and added just two assists, but was a constant force former coach Luis Pulido couldn't afford to take off the field for more than a few minutes. Perhaps her biggest contribution is as voice of the team.

Gomez-Garcia almost always spoke up in pregame, halftime and postgame huddles, and was in constant communication with her teammates all 80 minutes of a match.

New head coach Jennifer Schutt said that's been a help to her early on. Getting to know her personnel and amplifying her message are both elements Gomez-Garcia has seized upon.

It's a familiar position to the senior who said she's proud to be part of the culture shift at CHS that has taken place since she was a freshman.

"When I was a freshman, I was the only freshman on the varsity team and there were times I felt like I was better than some of those girls," Gomez-Garcia said. "But at times I was put down because it was, ‘You’re a freshman. You’re not supposed to be better than me.’ They would get mad about that."

Columbus only has a handful of seniors to go with a roster that will include, once again, mostly underclassmen. However, many of those freshmen now sophomores were starters or regular players a year ago.

There's also a large freshmen class that Gomez-Garcia has already shared her experience with.

"We tell our freshmen now if you know you’re spot, you go and get it; don’t let anyone tell you differently; you be the leader you want to be," she said.

Leading the way is Schutt who takes over after Pulido went 41-25 and led the program to two state tournaments in four years at the helm. Schutt was already in the Columbus community, teaching grade school at Emerson Elementary.

"I’ve told the girls that, every day, I don’t care whether you’re on varsity or JV, every day you’re earning your spot, to retain it or move up. Making sure they give everything they have in practice is the mindset we hope translates into our games as well."

Schutt prefers an attacking style in which Columbus won't be satisfied without the ball. She prefers her team to have possession, constantly pressuring and dictating the action.

And while setting style and culture is important, Schutt also understands that Discoverer soccer players expect to win. Fortunately, she said, she's been handed a group gifted with talent developed by previous coaches and the Columbus soccer community.

Schutt acknowledges there's a pressure to win but feels the pieces are in place that she's not stepping into a rebuild or anything even close.

From the first day of practice, she sensed the drive from months earlier when it was all taken away. That has also helped the team come together quickly with new leadership in place.

"I think that translated into this year; the hunger of doing better this year," Schutt said. "A lot of the girls who were heartbroken last year came back with a vengeance to do better."

Doing better almost certainly means a team that can put the ball in the back of the net more. Columbus managed just 13 total goals last season and suffered six of its eight losses in one-goal contests.

Older and wiser as a group, Gomez-Garcia believes the team has come a long way from a year ago when most players had to adjust to the speed of varsity play before finding a comfort level and simply getting to work.

She said that won't be the case this year. She and her teammates, most of whom were together in youth soccer, are now together again on the high school level and ready to win now.

At least in her case, this is the last chance.

"There’s that confidence there that, we know we can do big things. It’s a mentality. If you want this, then let’s get together, and they realize that and they see that," Gomez-Garcia said. "This is our year. We want it."

The Nebraska Schools Activities Association either made a high school spring sports season more or less likely, depending on your perspective,…

Columbus Baseball: Now is the time

There was little indication that night in Crete that the 2019-20 Lakeview boys basketball season would be anything but a struggle.

Scotus Girls Soccer: New faces ready to make a name for themselves

The likelihood of a spring high school sports season occurring this year took another hit Wednesday.

Columbus junior Sofia Gomez-Garcia pulls up short of the goalkeeper while chasing down a pass from a teammate last season. Gomez-Garcia leads a Discoverer team into her senior season looking for a return to the state tournament.

Madison Jenny hugs Macee Trotta while teammate Katelyn Lantis joins in after Trotta scored a goal in the third round of the shootout in a Columbus win over Hastings last season. Jenny and Lantis return as potential team leaders this season.