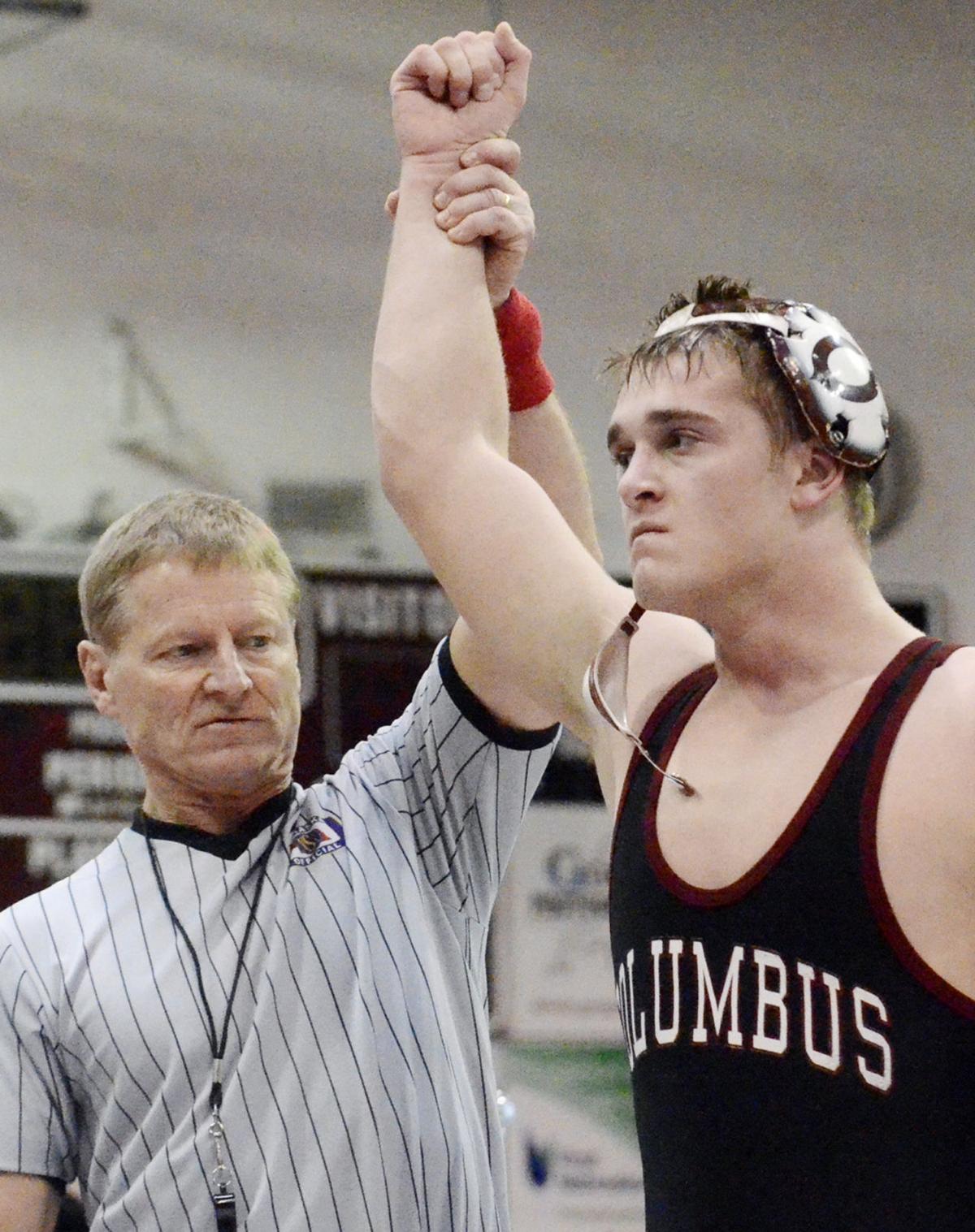 Columbus High's Colton Wolfe has his arm raised by the official following his victory over Alex Kerr of Lincoln Pius X in the 195-pound final during Saturday's Class A-2 district tournament at CHS. 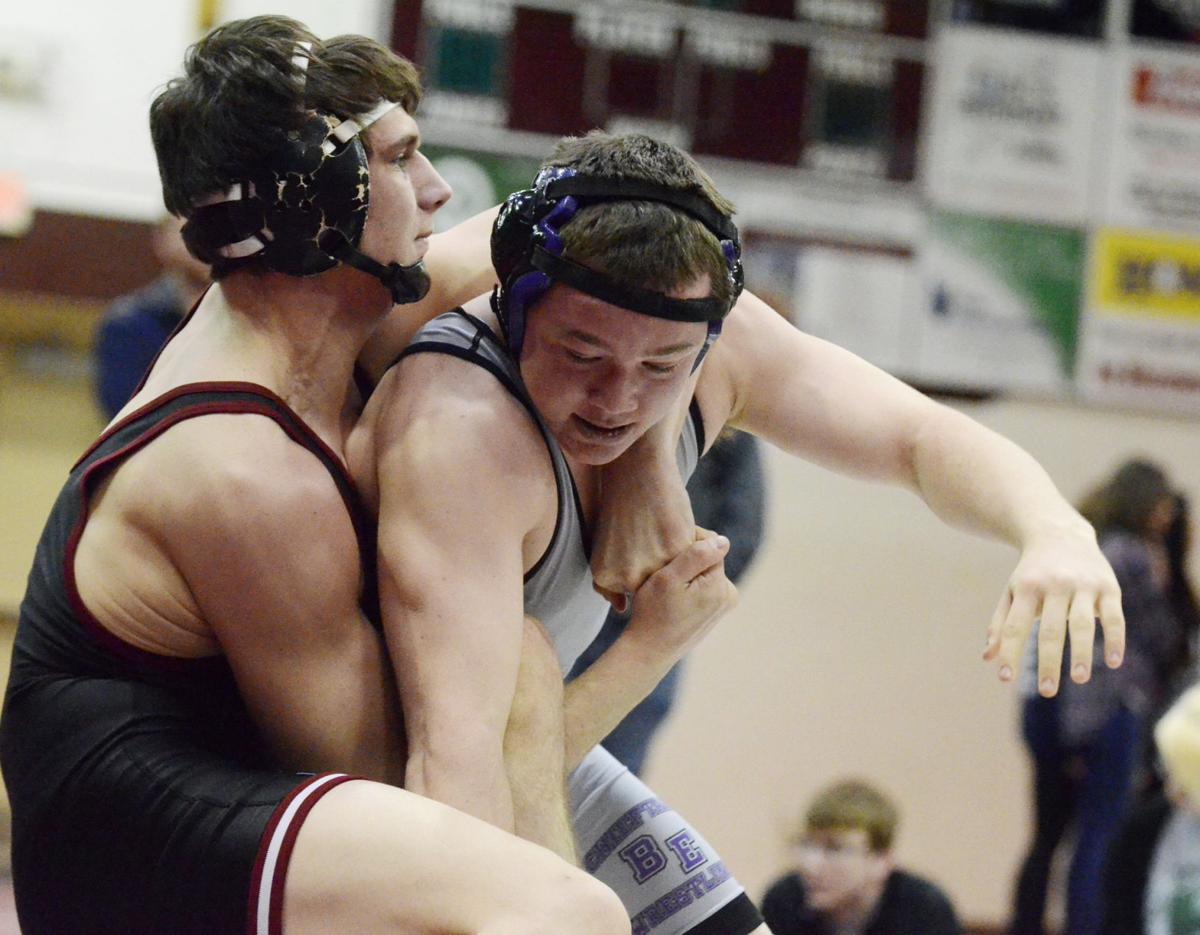 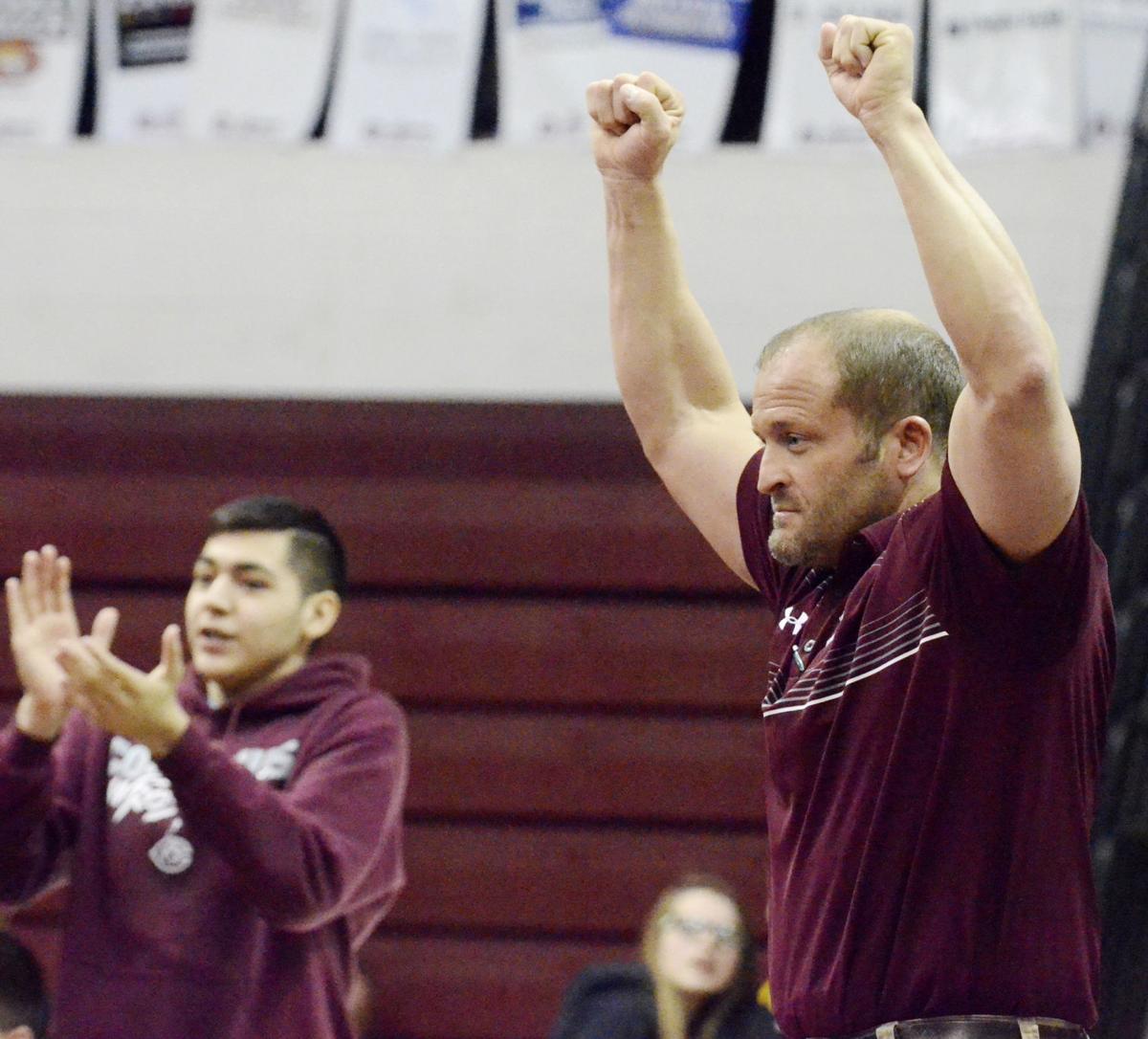 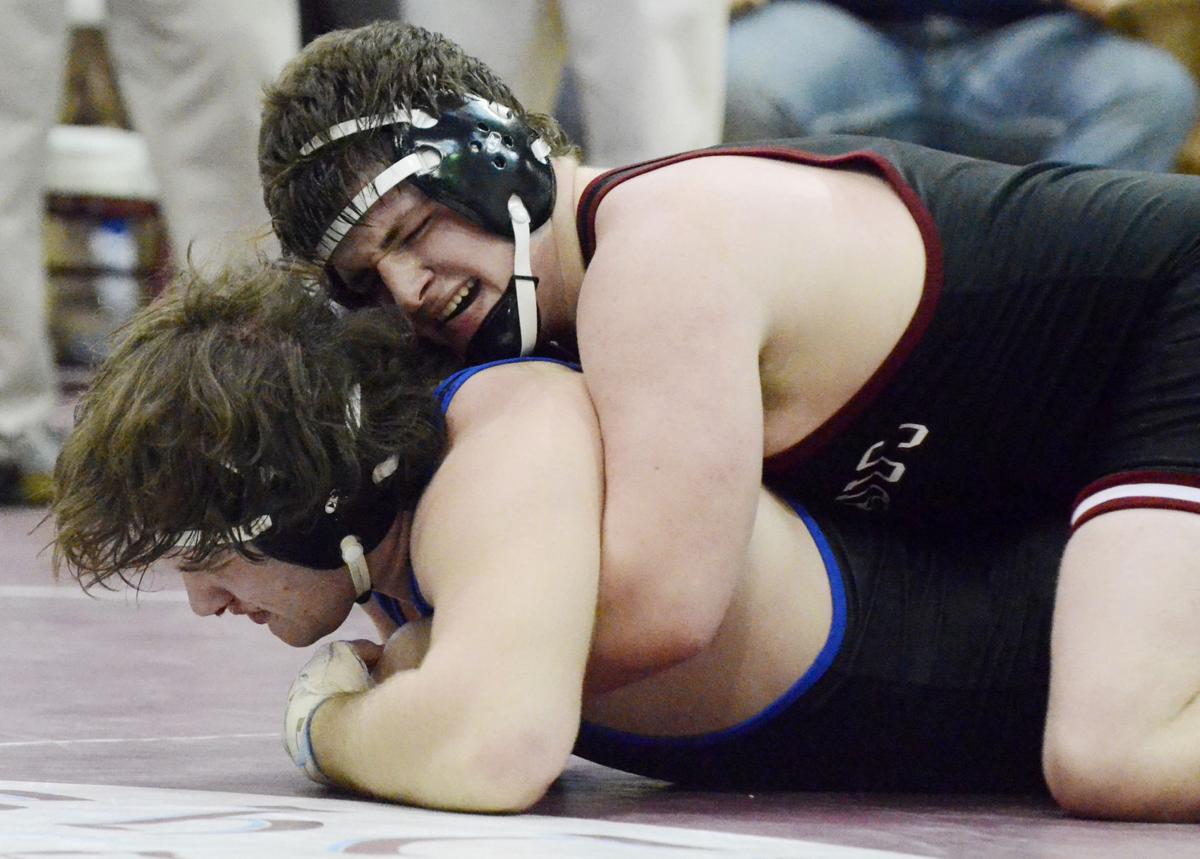 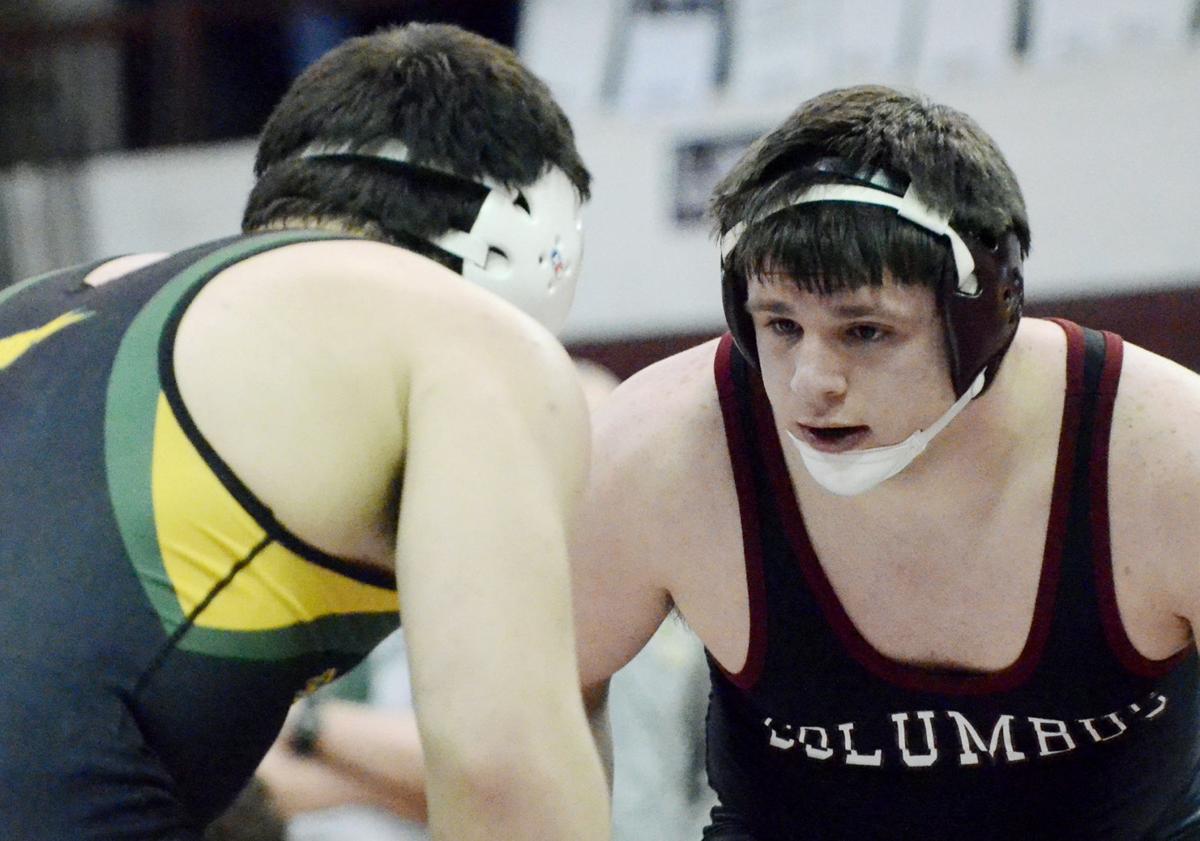 Columbus High's Wyatt Olcott, right, faces off against Marcus Cisneros of Lincoln Pius X in the 220-pound final during Saturday's Class A-2 district tournament at CHS. Olcott won the match 3-1 with a late takedown. 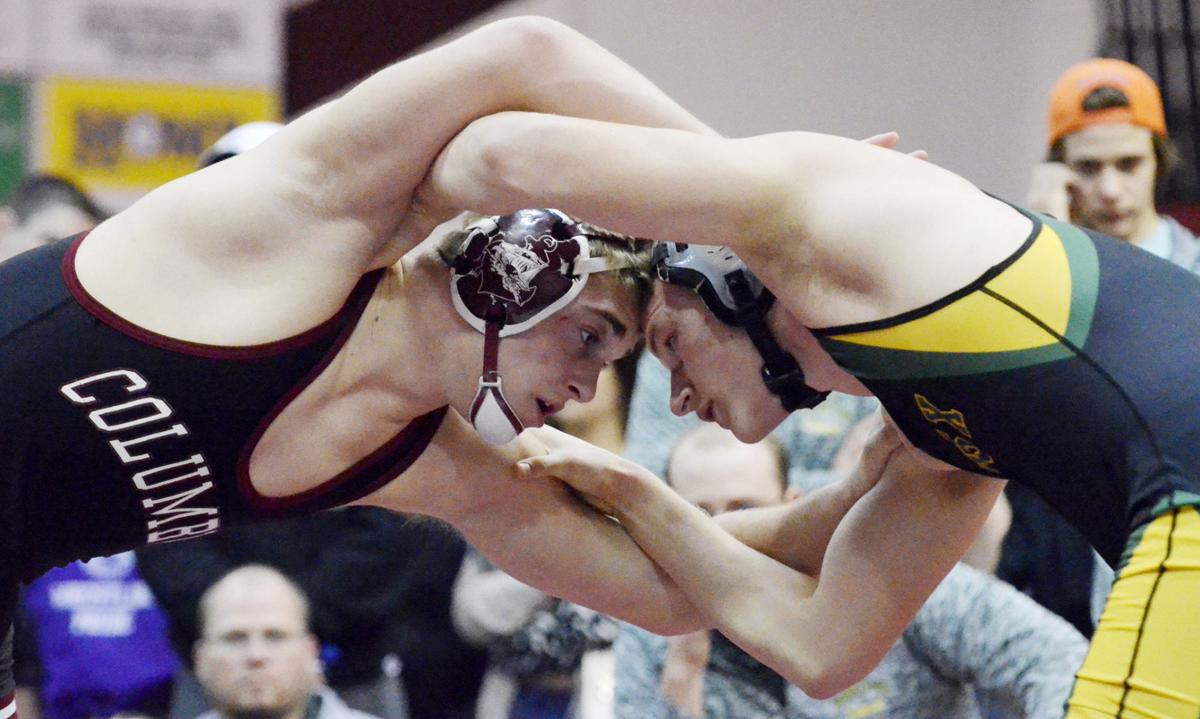 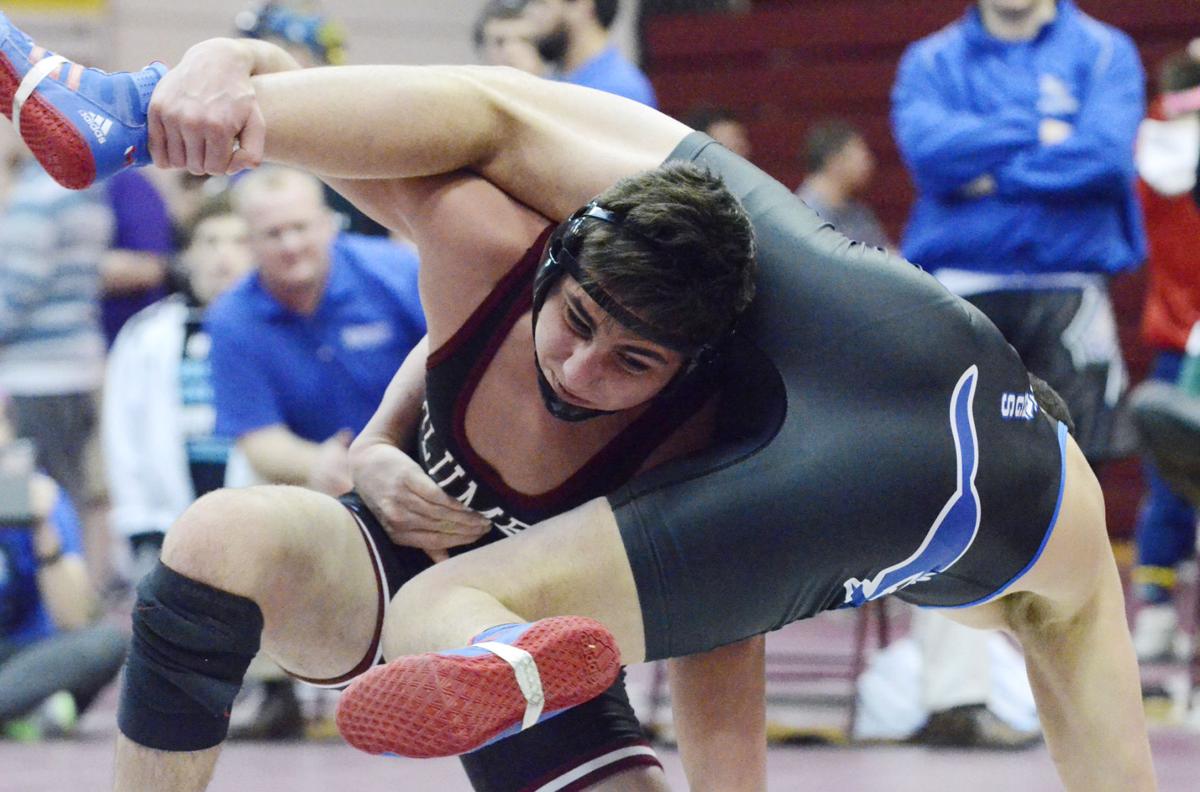 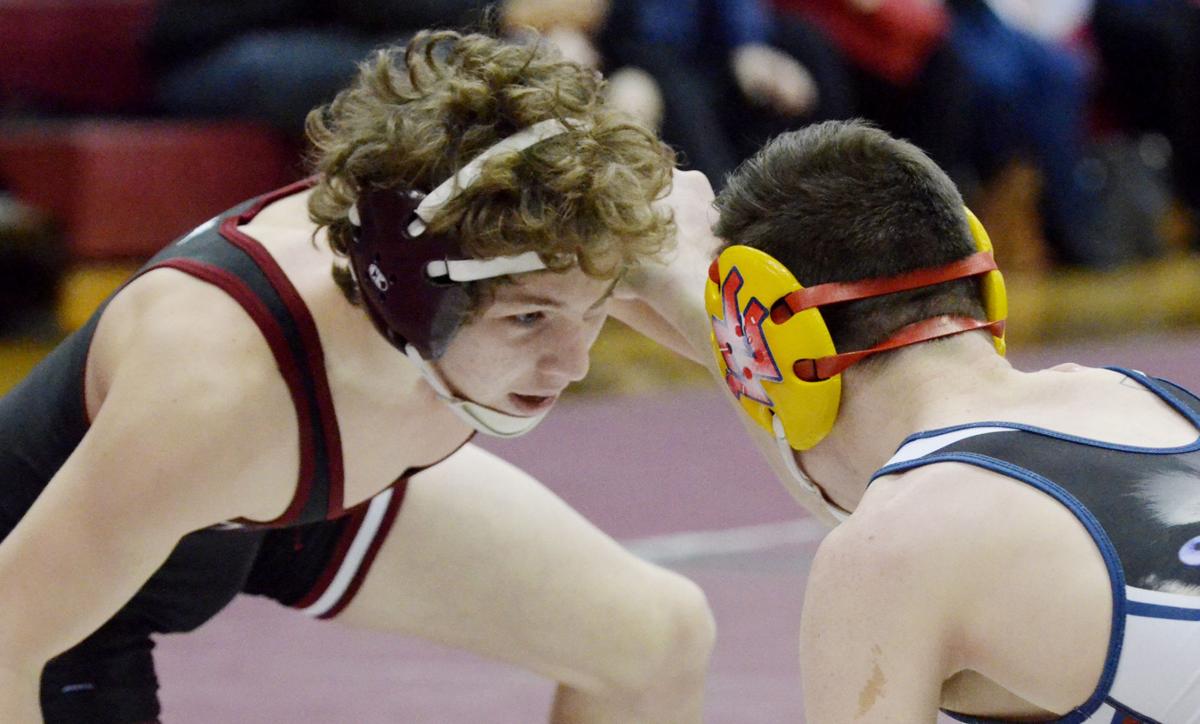 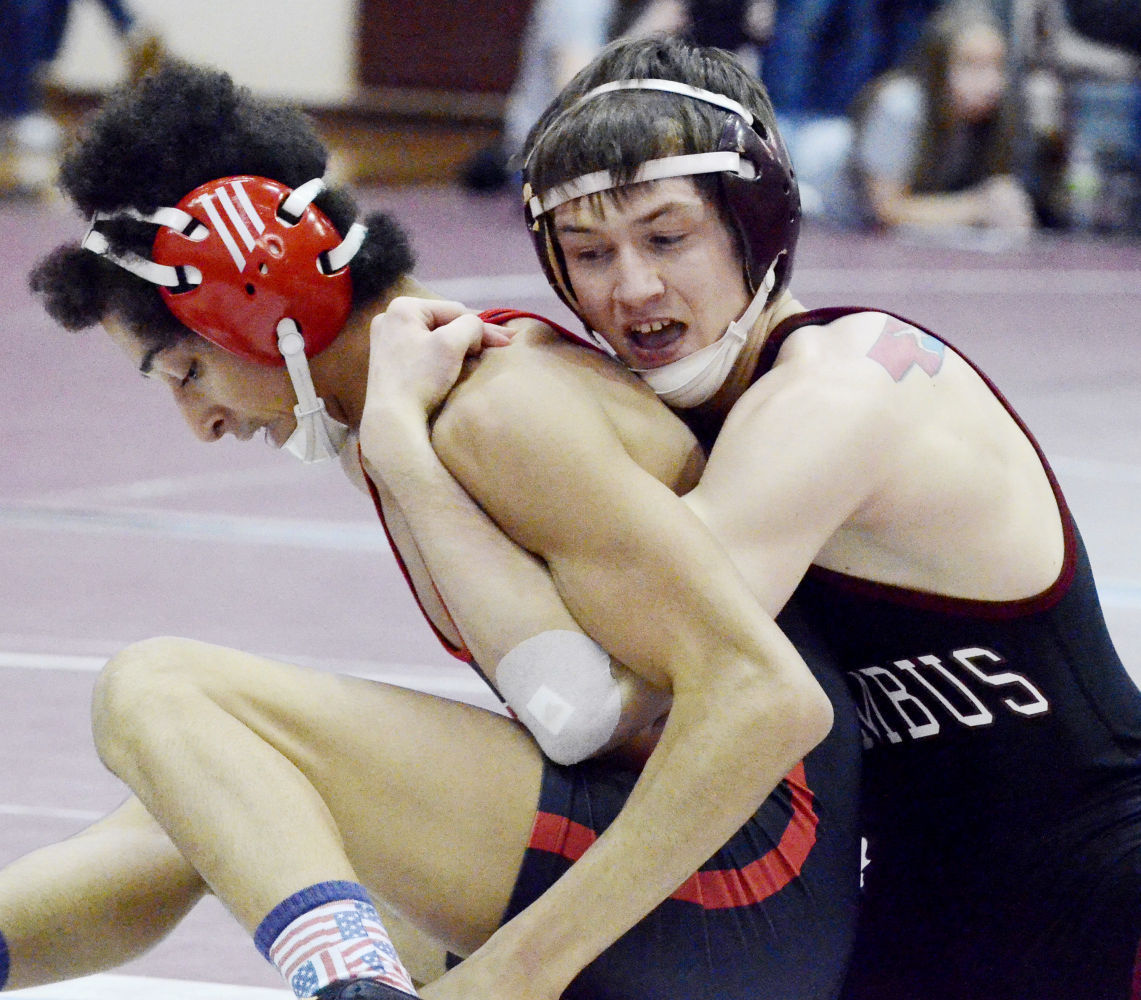 COLUMBUS — Cy Marshall’s emotional reaction at the end of his match in the heavyweight final summed up the day for Columbus High.

There was plenty to celebrate Saturday for the Discoverers, who won their first district title since 2008 and qualified 11 wrestlers for this week’s state tournament in Omaha. The victory also earns CHS its first-ever spot in the state dual championships set for Feb. 27 in Kearney.

“I feel like we really performed well. We really showed what we can do as a team, what we will do as a team,” said Marshall, whose 4-2 win over sixth-ranked Brandon Eastlack of Millard North in the heavyweight championship capped a run of four straight first-place finishes for CHS.

The second-ranked Discoverers, who have won four consecutive tournaments, are peaking at the right time, Marshall said, but there’s still work to be done.

He has his sights set on two more team championships to close out the season.

On Saturday, the Discoverers racked up 179 team points on their home mats to top second-place Bellevue East (148.5) and third-place Millard North (130.5).

Schulz (41-5) started the string of victories by taking a 6-2 decision over Bellevue East’s Gabriel Jeffrey at 182 pounds.

“It was a real tough match. I’ve never seen him wrestle before so I didn’t know what his tendencies were. I just went in and kind of winged it,” said Wolfe, who improved his record to 47-0.

At 220 pounds, Olcott shot in for a takedown with less than 10 seconds remaining to beat sixth-ranked Marcus Cisneros of Lincoln Pius X in the title match. The 3-1 victory, which ignited the home crowd, moved his record to 34-7.

“We’re satisfied to have 11 (state qualifiers),” CHS head coach Adam Keiswetter said. “Last year we had 10, and we thought that was incredible. It’s enough to go to the state tournament with confidence thinking we’re contending for a trophy.”

Keiswetter likes his team’s chances at the state tournament, which begins Thursday at the CenturyLink Center. The CHS coach said the Discoverer wrestlers continue to improve, and he believes those who didn’t win individual titles on Saturday will compete for medals in Omaha.

“Those were big matches,” Keiswetter said. “That’s almost like the state finals.”

Earls was third for CHS at 152 pounds with his only loss coming against sixth-ranked Kylan Byars of Omaha Northwest. Nelson (170 pounds) and Zwingman (132) both finished fourth.

Keiswetter said the Discoverers are “closing the gap” on No. 1 Millard South, which won the Class A team title in 2015.

His wrestlers are just as confident.

“I think we’re pretty set for state, if everyone wrestles the way they can and comes out next week with a little motivation and drive,” Wolfe said.

Marshall isn’t thinking about anything other than a title.

“We want to pull this one out,” he said. “We feel like this is our year to finally do it.”

Columbus High's Colton Wolfe has his arm raised by the official following his victory over Alex Kerr of Lincoln Pius X in the 195-pound final during Saturday's Class A-2 district tournament at CHS.

Columbus High's Wyatt Olcott, right, faces off against Marcus Cisneros of Lincoln Pius X in the 220-pound final during Saturday's Class A-2 district tournament at CHS. Olcott won the match 3-1 with a late takedown.