Humphrey St. Francis volleyball poses with the championship plaque on Saturday after defeating Plainview in the district championship. 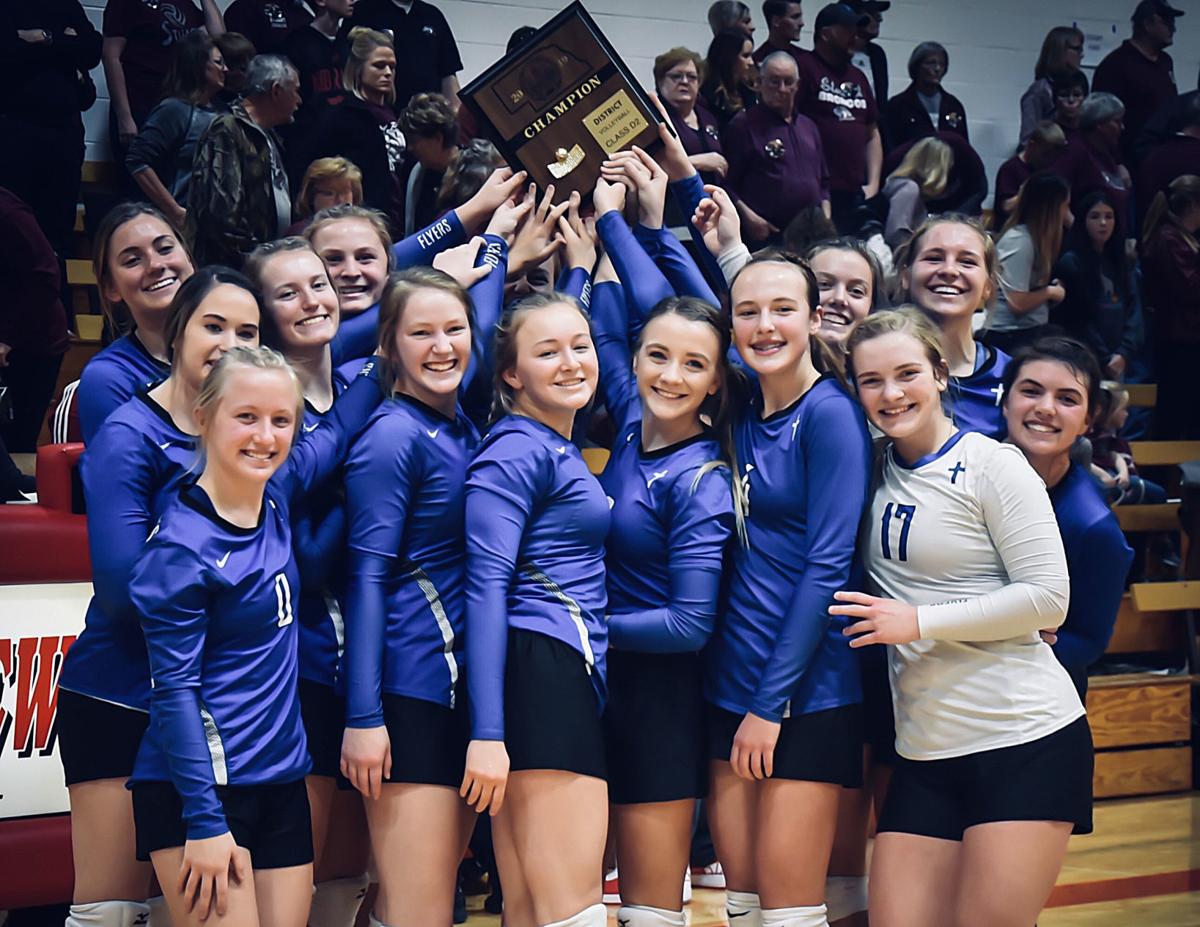 St. Francis players come together just moments after winning the district title on Saturday to collect their championship plaque.

A year after falling short of state in a five-set district championship battle a year ago, Humphrey St. Francis volleyball crossed the finish line with flying colors on Saturday in Plainview.

The Flyers have three state titles in their history and a top finish of third in 2017 as their best finish during the current run of four state tournaments in six years.

The win earned HSF a No. 5 seed for a match Thursday against 29-1 Garden County at 3:30 p.m. at Lincoln Northeast.

"Last year we lost to a very good team in CWC, and we got that to five sets, but  yes, we are on a mission," coach Dean Korus said. "We have the right mid set and the right people to get the job done, but we know it's got to be a well-rounded effort form everyone, every day, every play."

St. Francis has won every match dating back to a sweep of Palmer on Oct. 15. While winning 10 in a row, Jarosz has had at least 11 kills in five of those matches.

The senior had just three such performances in the previous 16 matches. She leads the team with 238 total kills and has had 50 percent of that total during the current win streak.

Her season high was 24 in a five-set win over Nebraska Christian on Oct. 19.

"We brought the energy we needed to be consistent for the whole game," Korus said in comments. "We didn't play our best game at the net, but Caitlin, being as aggressive as she was, and as effective as she was, was dominant at the net.

"Our other hitters usually divvy up the load across the net, but Caitlin just had an extraordinary game, so we had to continue feeding her the ball."

And while she was a major weapon on Saturday, she wasn't the only effective Flyer on the court.

"Our serving game was a big surprise," Korus said. "I wasn't anticipating getting as many aces as we did. It sure takes the pressure off of other areas of the game. Stuart had a tougher time handling our serves than I thought they would."

Wessel, Weidner and Pfeifer all had a block as well.

Wessel led the Flyers in digs with 18, and Eisenmenger had a team-high 27 assists.

St. Francis might have had a little bit of an advantage after seeing Stuart at a summer camp a few months ago. The Broncos were just 3-21 a year ago, but came in 19-12 on Saturday.

"Stuart has come a long way from when we saw them at summer camp in Kearney," Korus said. "They were more aggressive, better disciplined, more confident. I know Coach (Sandy) Miller does a wonderful job with them going from three wins her first year there to 19 this season. I just felt we had a very special group of girls this year.

"They are competitive, easy going, great character and have a clear vision of what we want to accomplish. We also have good depth in our main positions. So, if someone is having a difficult time, I have the luxury of using others to get the job done."

Garden County's only loss came to Lingle-Fort Laramie (Wyoming) on Oct. 5 at the Morrill Invite. The Eagles have only lost nine sets all year, but four of those came last week in a five-set victory over Leyton in the sub-district final then Saturday over Twin Loup in the district championship.

St. Francis' only losses have come to teams in upper divisions. Against D-2 teams, the Flyers have gone 13-0.

"As far as the streak, we don't really talk about it," Korus said. "Our confidence level is increasing every time we play."

D-2 No. 5 Humphrey St. Francis and D-1 No. 9 Humphrey/Lindsay Holy Family are one win away from the state tournament after sub-district result…

Local volleyball teams began the postseason on Monday competing in sub-district tournaments around the state.

There was something off about Humphrey St. Francis outside hitter Caitlin Jarosz during a match earlier this season.

Humphrey St. Francis volleyball poses with the championship plaque on Saturday after defeating Plainview in the district championship.

St. Francis players come together just moments after winning the district title on Saturday to collect their championship plaque.